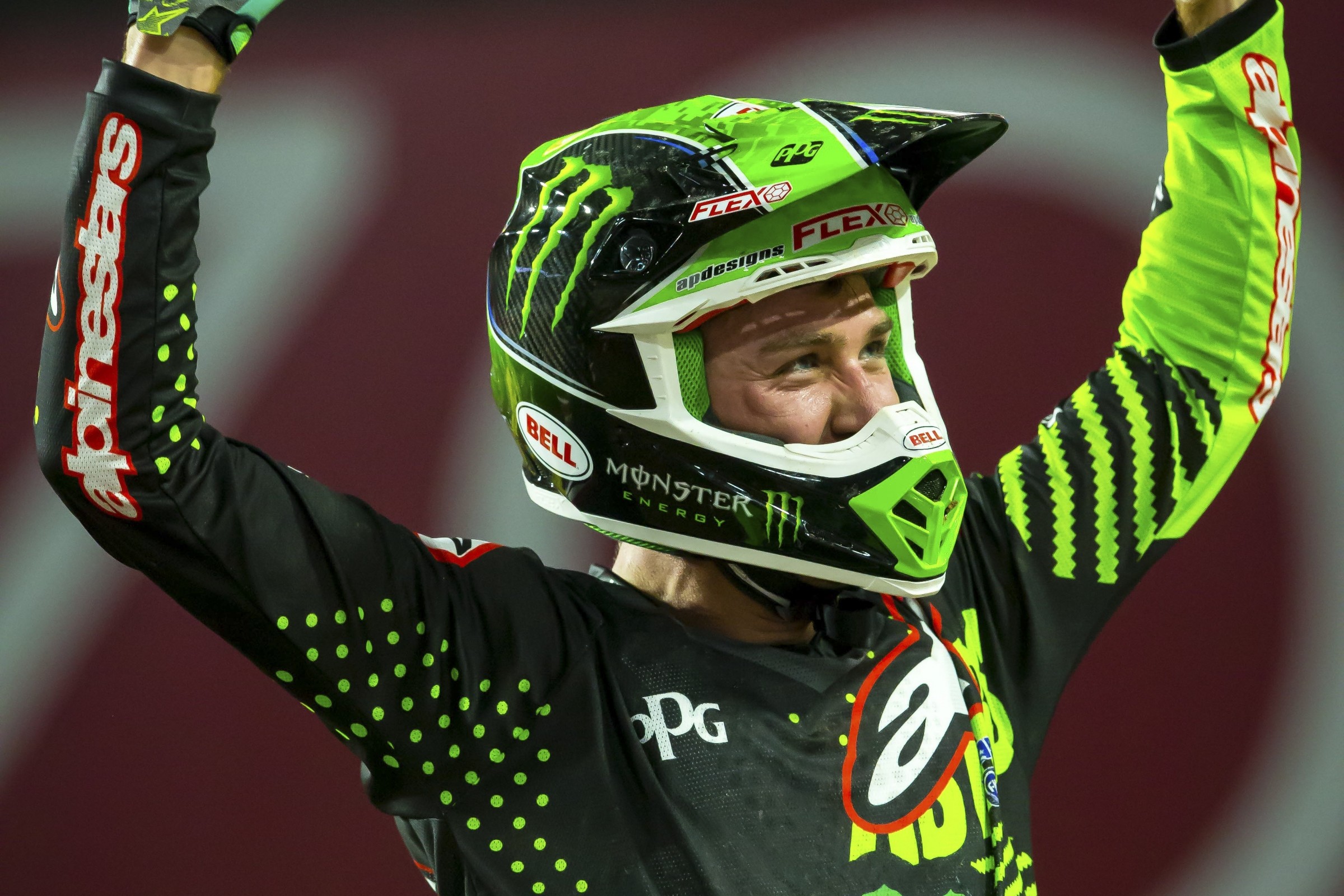 After a disappointing start to the season for Eli Tomac and Chad Reed, both were back in a big way on Saturday night in Phoenix. Tomac looked fantastic en route to his first win of the season, while Reed battled with points leader Ryan Dungey before taking second place—his first podium of the season. Dungey put in another podium performance with a third place finish.

Racer X: Ryan, that is five podiums in a row [dating back to Las Vegas]. You’ve got a 15-point lead in the championship standings. You’ve got to be pretty proud of that. But about halfway through the main event you were trying to get around Cole [Seely], and the guy with number 22 on his number plates goes around both of you. Did that catch you by surprise?
Ryan Dungey: It did. I knew it was a Yamaha behind me. I didn’t know if it was Cooper [Webb] or Chad [Reed]. I got a glimpse at the scoreboard. He was behind me for a while. I could hear him. He was right there in the whoops. I watched his semi and he was really good in the whoops. I was like, I’ve got to get these down so he don’t come up the inside. But I just set my sights on trying to make the pass on Seely, and then I was able to which was good. Then in the sand he came back and took the position back. Then we go into the next corner and Seely slid and I was boxed in down that whole rhythm lane, and there came Chad. Chad was riding good. I think it was just a matter of… I don’t want to say a matter of when he was going to pass us, but he was going to be there the whole time. I knew that. But once Chad got by I tried to just kind of tow in behind him. I knew I was losing a lot of time in that one rhythm lane, but overall just tried to tow in with him. His bike was hooking up good and he just had it down. I wanted to maybe make a late charge at the end there but wasn’t able to. Guy’s riding good.

Chad Reed, welcome back to the podium. We’re back in a football stadium this weekend. Bigger track, bigger whoops. How much did that help your setup on your bike and did that just kind of get you motivated for your main event?
Chad Reed: The stadium and the track had zero to do with my bike. What we do during the week is where it all happens. In all honesty you’re happy to be here but I’m frustrated. In May I knew what needed changing and we sat on our hands all off-season. Finally when you suck at the first race they allow you to do the things that you feel like you need to do. Finally now I can ride the dirt bike the way I feel like I need to. We’re within the window now. Now we just need to keep chipping away and try to get better.

Eli, two awesome starts. That was pretty much the tale of it. Once you got to the front you rode excellent and you really pulled away quickly. How did you get those holeshots?
Eli Tomac: I don’t know. We were just on it tonight. When you’re in clean air it just makes racing that much easier. There was a lot of stuff going on this week that changed for myself and the team and it turned into a positive, obviously. These past three weekends have been pretty embarrassing for myself and as a racer, so I feel like at least I’m back to some fighting form.

Eli, how much can you tell us about what actually went on during the week?
Tomac: For me it’s just all about finding a good balance. Going from the fall to Anaheim 1 I thought I was in a really good spot, and then you go to the racetracks and it’s a different story. I’ve done it quite a few years now and I thought I was in a decent spot and those first few rounds I was struggling big time. Just made some changes this week that just fit me.

Chad, big change for you this week as far as I would imagine the motorcycle. Is that what you would expect from yourself every single weekend?
Reed: Honestly, I do. I know that everybody wants to high five me like this is my last time, but I don’t work hard, I don’t put myself on the line to just come out here and make up the numbers. That’s how I felt at the first three. Kind of echo what Eli just said—you work too hard. We expect to be here. Sometimes you kind of know what you need to do, you feel it, and sometimes it just doesn’t make it happen. Sometimes it needs to get worse before it gets better. That’s kind of what this last three races have been. It’s just been a disaster. I think last week I was decent, just my starts. Even tonight, to be honest with you. I think I can throw down with Eli if I get a good start. Just need to work on that.

Chad and Eli, did it fire you guys up last week after the [Ken] Roczen injury that pretty much everybody kind of crowned Dungey at that point? How did that make you feel?
Reed: I don’t know that I would use the word fired up. I’m sad for Roczen, to be honest with you. Maybe the complete opposite to what you just said. I think it’s sad that we lose a talent like him. But we’ve got a long way to go. Kenny made a small, little mistake that was really, really costly. Ryan’s won three titles for a reason. Every year we’ve seen red plates on the 94. It’s a 17-race series and that’s a shame to lose Kenny this early.

Dungey: Nobody handed me anything. There was no crown. When the championship is done and the guy is holding the one plate… nobody crowned anybody last weekend. We lost a very valuable rider for our sport, too. None of us up here take it lightly. It humbled all of us because it can happen like that to anybody.

Reed: It really can. It can happen like that. I think that you see somebody that’s riding with such confidence and at the top of his game and with a split second it’s over. I’m sure that all of you have seen the pictures that he’s posted. It’s gross. It’s sad. I’m more worried for Kenny’s health than this guy being crowned.

Eli, how did you hold it together after those first three races to keep your head in the game like you were able to do and make the proper changes and get yourself back in the mindset to go and do this? How hard is that when you obviously had to be frustrated.
Tomac: It was embarrassing and I just felt terrible. All I can do is just try to get better. I didn’t believe I was that guy getting eighth place. It probably looks really weird that I went from eighth to first place in one weekend with how bad I was riding, but I just found a better balance for myself and made it happen.

Chad, I had read somewhere talking about you wanted to go after [Mike] LaRocco’s race main events record, which would take you into next year. At the press conference to start the season you talked about wanting to get another year or more on a contract and you had to get racing first. What do you feel about that at this point?
Reed: I feel better about it this weekend. It was frustrating the first three. Of course the record would be nice, but I think that if I’m to go for records the win record is what means the most. I check a lot of boxes with a win. Being the oldest guy to win a race I think would be pretty cool. Of course if I keep riding the way I can I think that LaRocco’s record falls. I think that I showed this weekend that I’m in it for the right reasons. I think Yamaha’s better with me there and my input and helping my teammate out and heading him in a better direction. I hope to continue that relationship there, but we’ll see what happens.

Eli, will you change anything this week or just leave everything the way it is?
Tomac: We’ll just leave her be.