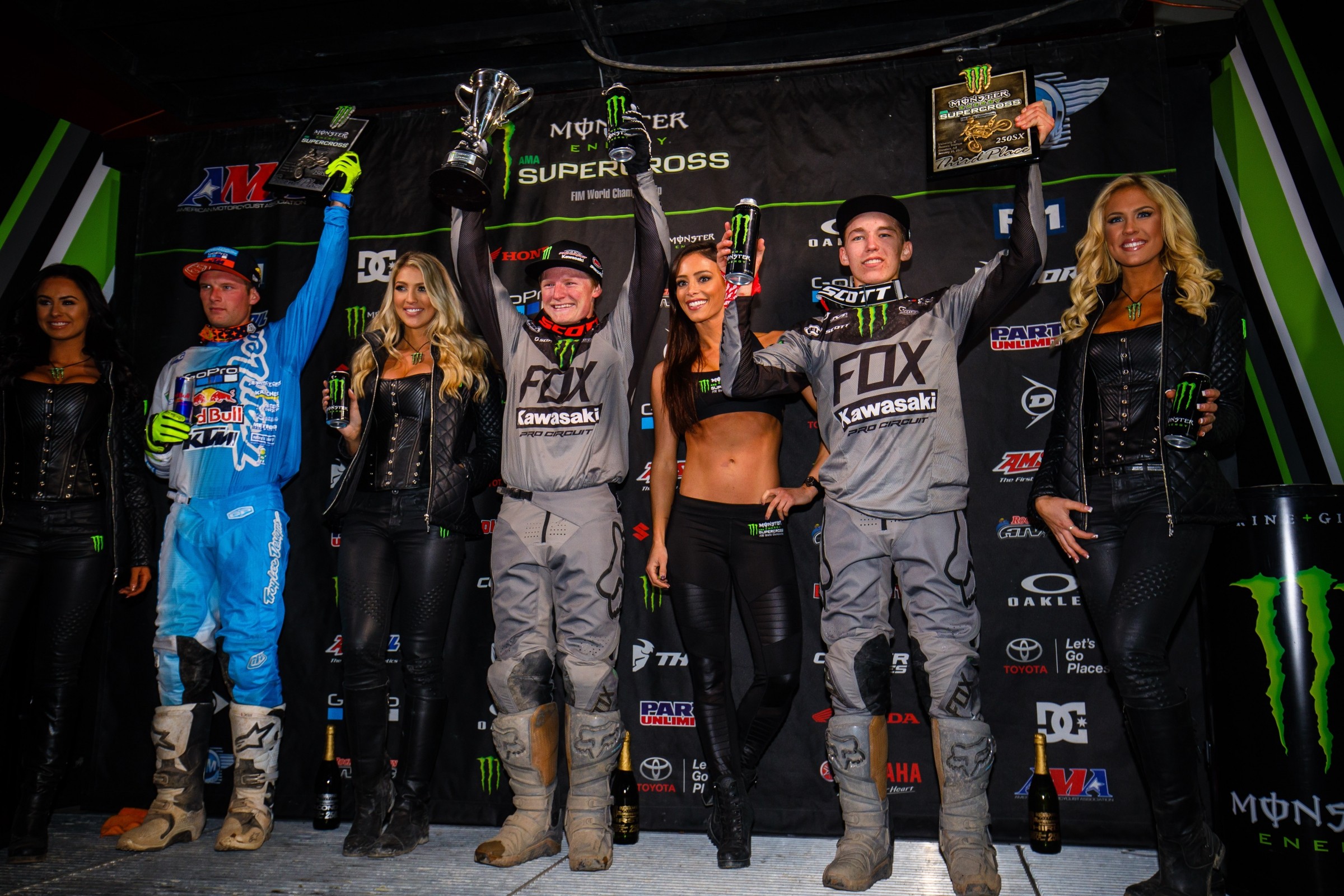 The 250SX West Region is shaping out to be a fantastic battle. Through four rounds, both Troy Lee Designs/Red Bull KTM’s Shane McElrath and Monster Energy/Pro Circuit Kawasaki’s Justin Hill have two wins, and are separated by just four points in the standings. The two friends had a hard-fought battle in Phoenix on Saturday, with Hill coming from behind to make a late pass on McElrath to seal his second straight victory. With his second place, McElrath still holds the points lead. Hill’s teammate, Austin Forkner, led early before finishing third for his first Monster Energy Supercross podium.

All three riders spoke to the media after the race.

Racer X: Austin, you’ve been a quick study. You got an awesome holeshot. What’s it going to take to take the next step and get a victory? Are you learning what the pace is at the front of the pack?
Austin Forkner: Yeah, I think that’s the biggest thing. My starts are dialed. I’ve holeshot the past four races that I’ve been in, so it’s been good. I really like how I rode tonight and just that I was calm. Even though those guys got me I just kind of tried to latch onto their back wheel and figure out what they were doing faster than me and try to fix it. It kind of worked out. I just kind of latched onto them and tried to ride my own race and not really worry about anybody else. Just tried to avoid making the big mistakes kind of like I did in the heat race.

Second place Shane McElrath and still the points leader. You got to feel good about that. It was a strong main event. The lappers came into play there a little bit, but you got to be happy to keep the points lead.
Shane McElrath: Yeah, that’s all I had. It wasn’t anything on my part, just ran into lappers like you said. I just knew this guy was back there laughing at me trying to zig-zag in and out of people. But I’m ready to battle this guy until the last checkered flag. It’s always fun. It’s always safe too and that’s the big thing. We can race each other hard but at the same time it’s in a smart way. The track was sick tonight and I felt good all day. Just kind of needed to go to the LCQ and that helped me out. I’m ready to go again.

The big winner, Justin Hill. Let’s go back to San Diego about halfway through that main event there a light switch went off and you’ve been on fire ever since then. Got the victory last weekend. Today you’re the fastest qualifier. You won your heat race and you won your second main event in a row. On the podium you said you were strong upstairs, strong in mind. What’s changed for you and how are you so strong right now?
Justin Hill: Just experience. I’ve been through so much, not all good things, and you learn a lot from it. When I came into this year the least prepared I’ve ever been—from an injury—I didn’t think I’d be West Coast. But I just thought, you know what? I’m a man. I’m going to make it work. We’re going to do the best that we can do. That’s all I’m doing, is the best I can do. The first race I left stuff on the table and I got a fifth. I’d be in a better spot and a closer battle with Shane right now if I hadn’t done that. So right after that moment I said, no more of that. We’ve got to do this and we got to do it right.

Justin, when you were battling with Shane there was a lapper in the way on the start straightaway at one point. It seemed like you checked up early. I was trying to figure out what you were thinking or why you let up at that point. It seemed like you might have had the pass made.
Hill: Just like Shane was saying, we’ve got so much respect for each other that the last thing I want to do is send him in a cartwheel down the thing. That’s one of the fastest straightaways we’ll probably see this year. We come into the thing hot. It was a close deal. I was looking over. I knew where he was. I knew that he was going for it no ifs, ands, or buts. What I could have done would have been hairy and neither one of us needed it. I was confident in my whoops speed that I maybe could make a pass there, so I waited and gave Shane the respect that we have for each other. I didn’t want to do anything ridiculous.

Shane, after getting into the lead you sprinted hard for three laps showing possibly the best speed you’ve shown all day. Right after that into the lappers. What was the hardest part about getting through them tonight?
McElrath: Definitely the lappers. Even when Justin got right up on me I still felt fine. I was still able to hit my marks when I wasn’t trying to miss the lappers. I felt good and I still feel good. I feel like we need to go out and do it again. It was that much fun. We’ll go back this week and just work on a few little things. I didn’t have any really big mistakes tonight. I was happy with my riding. Just some things that I couldn’t control and that were out of my hands. If it would have been the other way around it would have happened the exact same if Justin were in the lead and had to deal with that. We fought for it tonight and we’re just here to represent the team. I feel like we’ve done a good job tonight and that’s all we can ask for.

Austin, congratulations on your first podium. Do you think it’s been kind of unfair that people kind of picked you to win coming in? Does this relieve pressure to get your podium?
Forkner: I don’t know. Obviously the first race I had the fall and the second race I was pretty sick and didn’t have a lot of energy. Last weekend was good. I kind of rode more like myself, just made the mistakes in the beginning of the race. I worked all week on getting going earlier in the race to try to fix that and not make a mistake. I don’t know how many laps I led but my first few laps in that race were pretty good. I was really happy on that. So just need to go a little bit faster, maybe pick up the speed a little bit, work on a few little things and just keep getting the starts that I’ve been getting and I think I’ll be fine.

Austin, can you talk a little bit about what it’s like coming in here having—you raced outdoors with a lot of these guys—but coming into supercross with the crowds and everything else and having to deal with much more experienced competitors and all that stuff? How do you handle it after races if you don’t beat them and all that sort of stuff?
Forkner: I’ve been pretty upset with my results so far just because I think that I have the speed. After coming off outdoors and winning the last race and doing good in the GPs racing Cooper [Webb] and [Jeffrey] Herlings, I feel like even though it’s supercross I feel like I should still be up here and battling for wins and being on the podium. But it’s definitely different. There have been a lot of things that I’ve had to learn. I’m obviously still learning. It’s a lot of fun though and I like being out front, so hopefully I can just hold on a little bit longer and get a win one of these days.

Shane, this is your first trip to the LCQ this season. How did that affect your mental state and mindset having to go from the LCQ into the main event?
McElrath: Like I’ve said before, it’s all new to me being the points leader and being in contention. Like I also said, it gets harder every weekend. So the LCQ was good. I went down in the heat race and got a little banged up and the bike was pretty tweaked. It just kind of put me in my place and made me realize I’ve got to stop fooling around. Not that I’m going to go out and risk everything, but I’m here to put up a fight. I’m tired of sort of being a little conservative. It was one of those times where I’m tired of not feeling like myself and not focusing on the right things. Just got back to focusing on my starts. I had a good start, I was just really far outside and did what I could with it, but I just settled in right away and started pushing the pace. I just felt good riding the LCQ. I think it was a little bit more of a warm-up. Going into the main I felt ready to go again. I’m excited for next weekend.

For both of you, you guys seem like you’re getting along pretty well regardless of who wins. Is that from being teammates last year? When did you strike up this friendship that we’re seeing now?
McElrath: I don’t like this guy.

Hill: Can’t stand him. No, he’s a good guy. He’s respectful. He’s a good friend of mine. Him winning—I’m happy for him. If I don’t win and he wins, that’s cool. We’re up here battling and it’s a tough sport no matter how you slice it, so if it’s me and him up here battling for wins, I’m enjoying it.

You hung out last year. You were on the same team. Is that where a lot of that came from?
McElrath: Yeah, we got to know each other pretty good last year, away from the track too. We’re not just racers and that’s all we’re known for. Very respectable guy and somebody that’s easy to get along with. I think that’s big in, not only the sport, but in life in general. It’s not every day you run into people that are just free and easy-going. It’s cool to be able to race each other hard and then be perfectly fine after the race—except I still want to beat him.