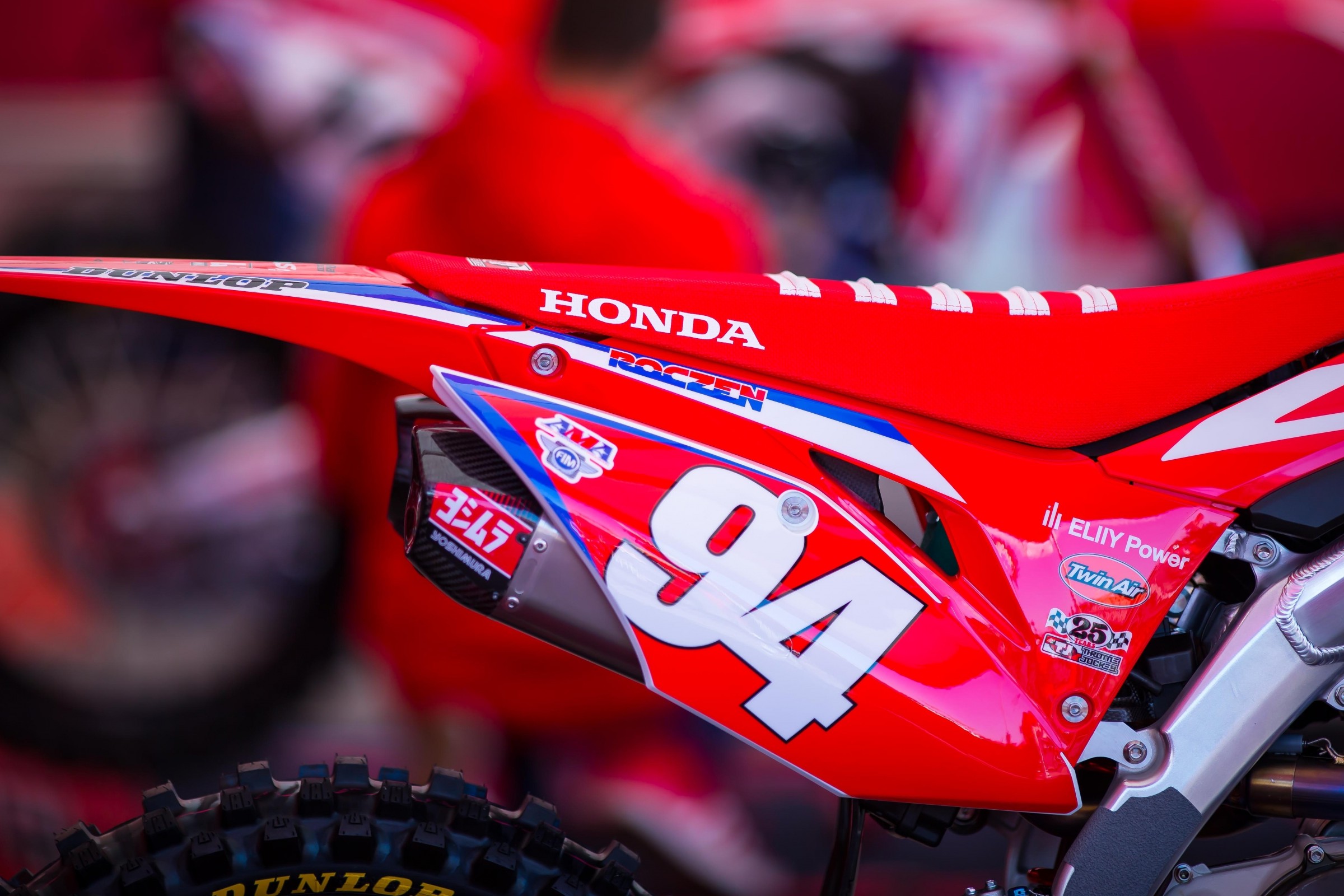 We had a good series going, didn’t we? This 2017 season was highly anticipated and it was delivering.

This was the outlook prior to the season: The back and forth between Ken Roczen and Ryan Dungey was great to analyze and debate. Eli Tomac was coming in more prepared than ever and ready to breakout in supercross. Marvin Musquin crushed the off-season circuit and looked ready to take the next step. Chad Reed lost a dozen pounds or so, rejuvenating his program. Rookie Cooper Webb was a big wildcard and some had him upsetting everyone with his determination and sheer will to win. Jason Anderson was your 2016 Anaheim 1 winner and after his heroic MXoN ride, had the confidence to match anyone’s pace. Cole Seely was motivated by the signing of Roczen and wanted to stake his claim as Honda HRC’s number one gun. All of these guys and more were eyeing 2017 as “my year.”

All of that hype, excitement, and uncertainty seemingly vanished Saturday night.

This Roczen and Dungey showdown was looking to be one for the ages. Kenny is the brash, young superstar that wanted everyone to know that it was his turn to take the reins. Dungey, the two-time defending champ, had zero intention of being put out to pasture. That collision of fortitude was the foundation for a fantastic 17-round war that everyone wanted to see.

It was happening, too.

Roczen came out guns blazing at round one, devastating the field with a pace that seemed unmatchable. Dungey took it in stride, though, and roared back with a vengeance at round two in San Diego. Roczen won both battles, but Dungey served notice that he was up for a heavyweight fight. That’s where we sat as the gate dropped for the 450 main event at Anaheim. Who would make the next statement in this mental battle unfolding every Saturday night?

It appeared Dungey was well on his way to evening the score. He rocketed out to the lead and found a 3.5 second gap over Seely and Roczen. For several laps he was able to maintain that gap and once Dungey settles in, it’s nearly impossible to rattle him. As this was unfolding, I was wondering where Kenny was mentally. Was he stressing about not closing the gap? Was he frustrated with being behind Seely? Or was he simply biding his time and letting the race come to him? There was no way to know of course, but it was definitely at the forefront of my mind as the laps were logged.

Then, in the middle of this unfolding story, disaster struck. Kenny, for whatever speculative reason, got bucked off of a rhythm triple and ejected. In a spectacular crash, Kenny torpedoed into the fourth jump. He visibly snapped his forearm and probably has more injuries we will hear about later. [Ed Note: Roczen sustained a dislocated wrist, dislocated elbow, and a compound fracture to his radius.]

He wasn’t able to roll out of the crash like he was in October. This was worst case scenario type stuff. There are several situations that riders like Kenny can salvage or make look elementary. This was not one of those. There is not much worse than a full forward kick when you’re not expecting it. All of the rider’s weight goes forward and all leverage is lost to reposition your body or push back down. The rider basically becomes a passenger at that point. By watching in slow motion, you can see that Kenny had zero foresight that this was coming. He was fully committed and his body positioning (full forward, attack position) was evidence that all was well on approach. It was a horrific crash that could have been much worse than the injury list actually was.

That crash sucked the air right out of Angel Stadium, and with it, the series. The monumental battle that we all longed for was ripped away in an instant. Not only did that crash remove the points leader, Jason Anderson was also disqualified after an incident with Vince Friese during their heat race. That means two of the top-five riders in the world are now virtually removed from championship contention after just three rounds.

Further, Eli Tomac’s woes have only gotten worse and he now sits a full race out of the lead. So, take another rider out of championship relevance. Going into the series, Steve Matthes coined the term “Big Six” when talking about who could make it happen this year. After three races, we have basically removed half of that group. Brutal. So, what’s left?

To me, this comes down to whether or not Marvin Musquin can put any sort of pressure on Ryan Dungey. He hasn’t been able to in the past and doesn’t look like he will on a consistent basis this year, either. I do think he will steal some wins away but week-in-week-out, Dungey is the better and more seasoned rider. He’s won this championship three times and knows how to manage a points lead. With his biggest competition out, his focus will be on racking up wins and avoiding catastrophe. Musquin is tasked with upping his level. He will need to put pressure on Dungey and force a mistake. The trouble there is that these two ride and train together. Dungey knows Musquin’s strengths and weaknesses and will be able to size him up better than anyone else on the starting line. Dungey won’t be intimidated or worried about a cheap shot because, after all, they are friends. It’s the ideal scenario for Dungey and the worst scenario for the fans.

There is a lot of suffering this week. Roczen will be fresh out of surgery and suffering the physical pain of a broken arm and even more painful, the agony of a lost opportunity. We, the fans, will also be suffering as Kenny’s horrific crash robbed us of a terrific showdown. What a night.