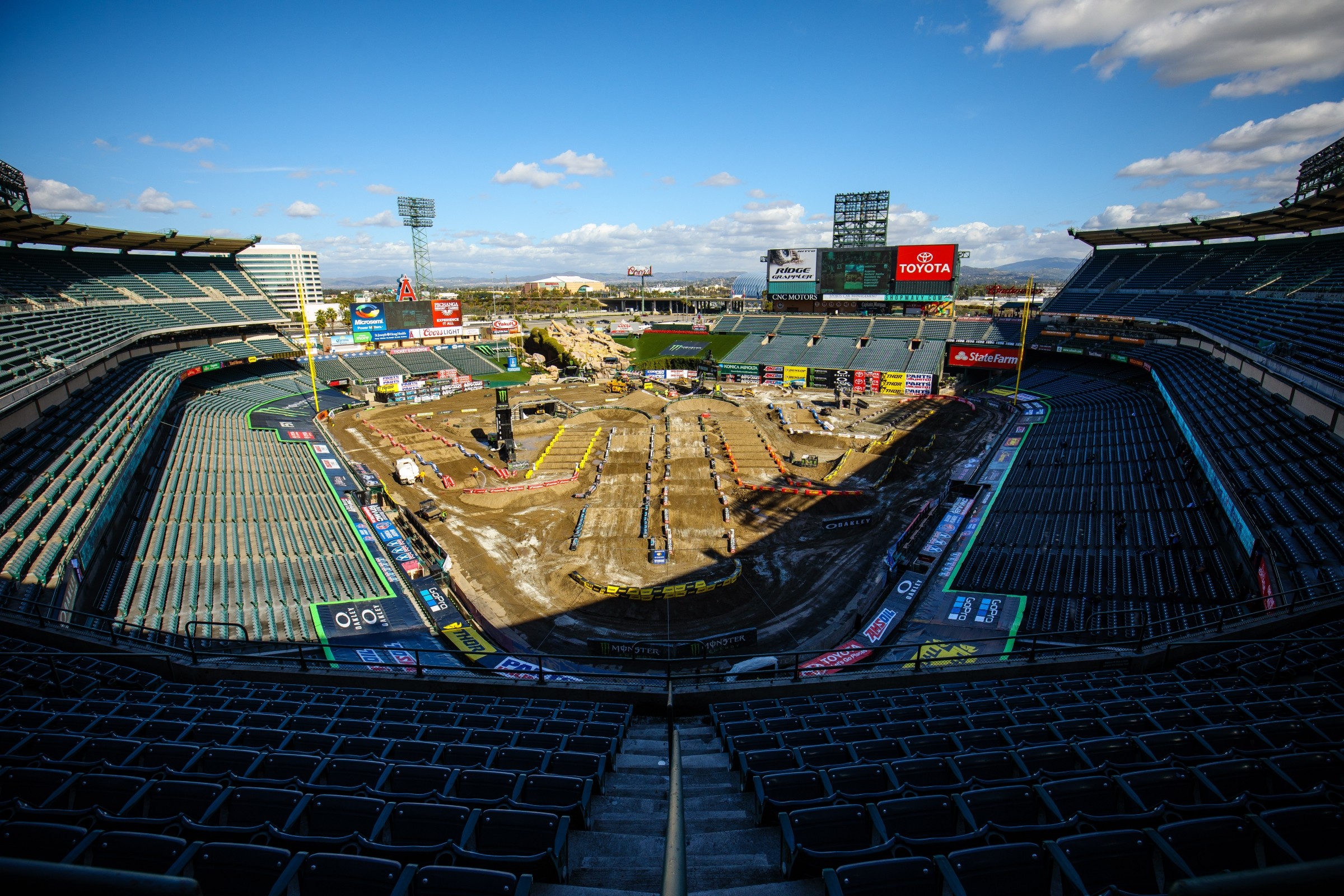 Ken Roczen’s injury is still being felt throughout the industry. The hype and anticipation of the 2017 season has seemingly already disappeared—replaced with a somber, anticlimactic attitude toward the remainder of the 14 rounds. Even the post-race press conference had a different feel, as Ryan Dungey, Cole Seely, and Marvin Musquin struggled to talk about an unforgiving sport, and how to find that fine line of pushing but being able to be there for 17 rounds.

“That’s a tough one to answer. I think where I was at with outdoors you’re trying your best, you’re giving it your all, you make a mistake and sometimes it costs you,” said Dungey. “But then again you can’t ride scared out there, either. You’ve got to enjoy it a little bit. The pace is only getting faster.”

“You can walk the track right now and it’s absolutely amazing that our bikes can make it through that kind of stuff. I don’t know,” followed up Seely. “It’s a gamble for sure. Even the last two laps for me out there, I kind of backed it down and rode it in just because it was hectic.”

“I knew what happened to Kenny on that triple. I got a bad kicker too for two laps in a row and then I switched my line,” said Musquin. “I did a different rhythm through there to avoid that specific takeoff. But yeah, we were rolling the section and going by Kenny for a couple laps and it’s hard. It’s hard to see because you see him laying down and not moving. It gets in your head.”

As you’re well aware by now, Roczen suffered a compound fracture of his left radius and a dislocated elbow and wrist. According to Honda, Roczen was transported to a local hospital for evaluation after the crash before flying to Colorado on Sunday morning to have his personal physician perform the multiple surgeries Ken will need to get back to 100 percent. There’s currently no timetable for his return.

Honda HRC team manager Dan Betley had this to say in a Honda PR: “Tonight was pretty bittersweet. I’m incredibly proud of Cole for how he rode tonight. Like I said last week, he’s better than how he raced at the opening two rounds, so to see him get good starts, show his speed and get a podium this weekend is awesome. I’m expecting a lot more podiums and even race wins from him because he’s more than capable. On the flip side, we’re all devastated for Ken. That is one thing that makes our sport so tough—everything can change in an instant. It was such a brutal crash, so we’re grateful the injuries weren’t much worse. The Honda family wishes him the best and we can’t wait to see him back out there. What doesn't kill you makes you stronger, and we’re not going to let this stop us.”

Malcolm Stewart made his 2017 debut on Saturday, riding for RIDE365.com/Stewart Racing on a Suzuki. Malcolm was on the Pulpmx Show on Monday with Steve Matthes and guest hosts Jason Weigandt and Blake Wharton. We live streamed the segment on the Racer X Facebook page last night. Check it out:

Malcolm rode well for most of the event, taking a solid second in his heat race, and then running in eighth for the first half of the main. Eli Tomac and Chad Reed got around him, but then on lap 14 he went down in the whoops and ended up way back, finishing 18th. Malcolm explained that he didn’t feel super tired in the main, but getting back into full race shape is still a work in progress right now.

Eli Tomac’s slow start to the season continued in Anaheim, finishing a season-worst eighth. The alarming part for Tomac is the race looked similar to previous events this year, as he started moving forward, but then started going backwards. On lap eight he passed Chad Reed and opened up a small gap on him. Six laps later, Reed reeled him back in, passed him and pulled away. Behind a 5-6-8 start to the season, Tomac is already a full race behind Ryan Dungey in points, just three rounds into the season. “The day started off strong,” said Tomac, who qualified fastest, in a team statement. “I was fastest in the afternoon, I qualified for the main out of my heat and was ready to compete. My jump off the line was strong but I was pushed around and had to settle in mid-pack. I had a hard time getting my rhythm today. I made a few passes but it wasn’t where we’re supposed to be. I know we should be up front, we will get back to work and keep fighting for the top of the podium.”

In the history of AMA Supercross, there have been 70 races held in Anaheim. On Saturday night, Reed made his 41st start in Anaheim—the most of anyone in history. Anaheim has hosted two or three races a year since 1999, and Reed made his SX debut in 2002, so he’s spent his entire career in the multi-Anaheim era. Also, he’s rarely missed one. The only Anaheims we can remember Reed missing were A2 and A3 in 2010, when he was out with a broken hand as a result of a crash at round two in Phoenix. Reed, who is tied with Jeremy McGrath, Ricky Carmichael, and James Stewart with for the most career wins at Anaheim with eight, finished a season-best seventh in the main event on Saturday.

Broc Tickle earned his best result of 2017 coming from dead last after an early crash in the main event to finish 12th. “The first corner in the main was pretty tight and everyone was bunched up in the middle,” said Tickle in a statement. “I came out seventh or eighth. I had some problems a few corners later. I cut down in a corner, came in hot on the inside, and someone cut down in front of me. I ended up t-boning them and falling over so I had to come from dead last. I rode back up to 12th and put in some good laps. I had good speed all night so if I could have gotten a decent start that would have helped.”

As we reported yesterday, Justin Bogle’s status for round four in Phoenix this Saturday is uncertain after he sustained bruised lungs, and “other minor stuff” in his heat race crash at Anaheim. “We ripped the holeshot in our heat but came up short on a jump a couple corners later,” he said in a statement. “I was hoping I’d be okay for the main so we went out in the semi to see where I was physically but there was just no way. I went to the hospital to get checked out and fortunately, there wasn’t anything major. Bruised lungs and some other minor stuff but I’ll be fine. We’re not exactly sure on recovery time yet so we’ll have to wait and see how this week goes before making a decision about Phoenix.”

After failing to make the main event at Anaheim 1 and San Diego, Rockstar Energy Husqvarna’s Christophe Pourcel was relegated to the 450 B practice for Anaheim 2. He showed some of his old qualifying speed, not only topping the B group, but netting fifth overall out of the whole 450 class. He later made his first main of 2017 at Anaheim 2 and finished 14th. “I got a pretty good start in the semi and ended up second,” said Pourcel in a team statement. “I just kind of did my thing, but I’m riding pretty tight. The track was rough during the main, and we saw some guys crash, so I’m happy I’m healthy."

Following a heartbreaking loss last week in San Diego, where he led until two laps to go but eventually finished fourth, Martin Davalos now finds himself 16 points behind the points leader, Shane McElrath, after a fifth on Saturday night. “I feel like I’m trying to chase a setting and I just can’t figure out what it is. I don’t want to push too hard and risk getting hurt. I’m heading back to Florida tomorrow to clear my mind and really get things going."

For a second-consecutive week, GEICO Honda’s Jeremy Martin began the 250 main event dead last after crashing with Phil Nicoletti off the start. Martin worked his way up to 10th, but sits 30 points down in the standings after three rounds. “A2 started out great with P1 in practice,” said Martin in a GEICO Honda press release. “Got off to a decent start in the in the heat with a third place and felt solid going into the main, but got into a first turn pile up. Had to remount from last to 10th place. Me and my buddy Phil kept finding each other.” Nicoletti would finish the main event 12th.

If you look at the results sheet, you’ll see consecutive sixth place finishes for Jimmy Decotis. But the route taken to those finishes were totally different. A week ago Decotis led 10 of 18 laps (the most of his career) before fading back to sixth, Decotis started fourth on Saturday night and finished sixth. “Happy with my riding, not so happy with the result,” he said in a statement. “Started fourth, I slipped back to sixth and stayed there the whole race. Fought as hard as I could but sixth was the best I was going to get tonight. Really happy with the positive feedback from GEICO Honda, though. I'm so blessed to have such a good team behind me.”

Continued improvement from Monster Energy/Pro Circuit Kawasaki rookie Austin Forkner. He finished a season-high fourth in Anaheim after qualifying third overall. “I was charging pretty hard in the first lap. I was stood up a couple times and then made a mistake in the whoops and went back to fourth,” he said in a team statement. “Most of the race all happened in the first couple laps for me. If I was able to get the first few laps clean I would have had a better result. After I started riding smoother, I was able to match the pace of the riders in front of me and I feel really confident moving forward.”

51FIFTY Energy Drink Yamaha’s Hayden Mellross was forced to retire from the 250 main event early after injuring his hand, and his bike, in a first lap crash. Per the team post-race press release, Mellross’ teammate Tyler Bowers “snuck past on the inside” and Mellross had nowhere to go and his “front wheel was knocked out from under him and other bikes slammed into him from the back.” Mellross said his hand injury shouldn’t sideline him for this weekend. “Each week my heat races have been going really well, and I'm showing these guys that I can run up front. Unfortunately, in the main, we collided and I went down hard on my hand and my bike was pretty bent. The hand is damaged somewhat but I’ll be at Phoenix next weekend."

Bowers went on to collect his first top-10 of the season with an eighth and said at least he’s building momentum. "I'm not where I want to be but at least have been building momentum each week. I worked more on sprints this week and it showed in qualifying and my heat. In the main, I was practically by myself for much of the race so I just tried to focus on consistent lap times. Eighth is better, but I know I'll keep improving."