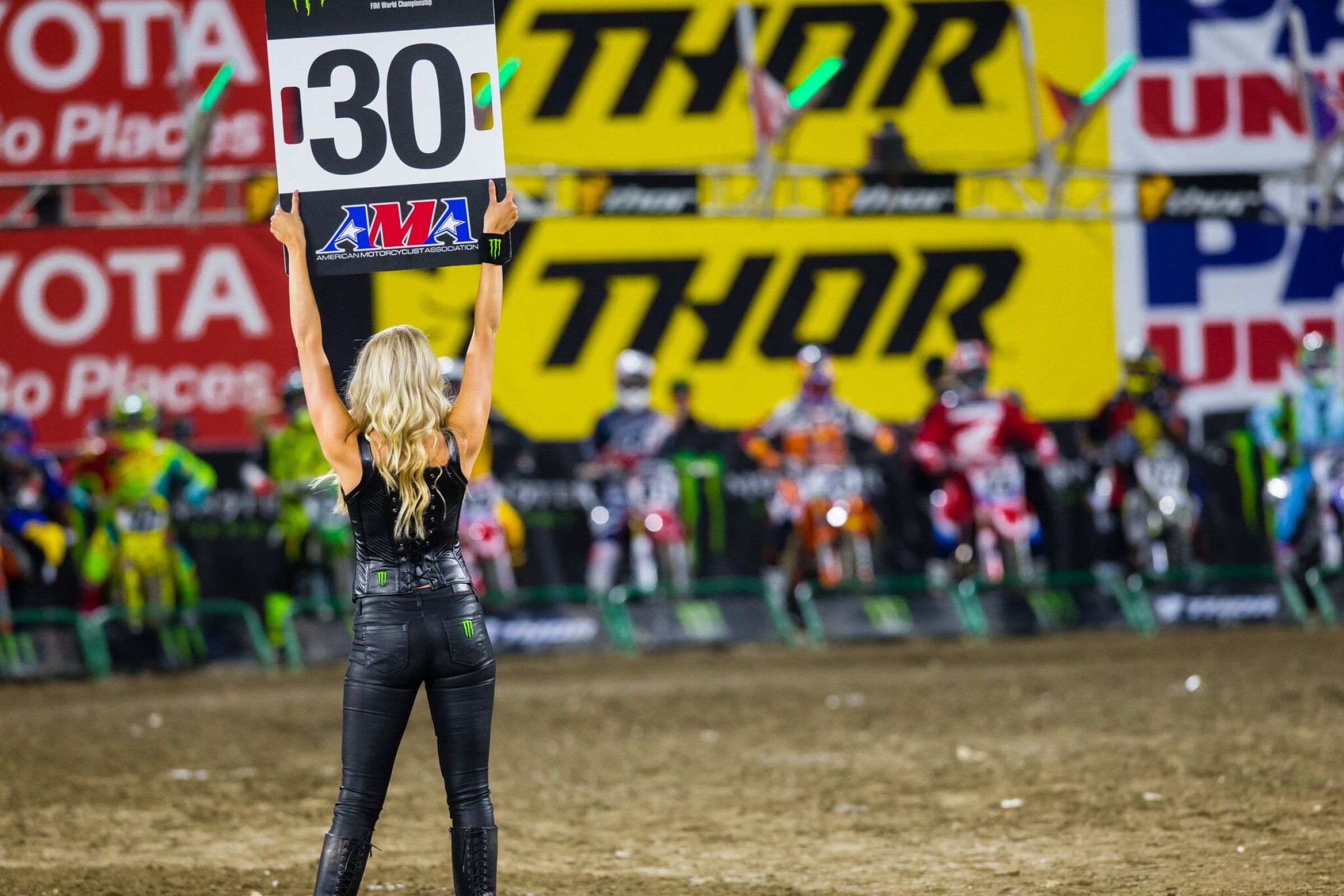 One of the major storylines heading into the 2017 season was the change by Feld Motor Sports this off-season to implement timed races. The change, which would see 450 main events switch from 20 laps to 20 minutes plus one lap and 250 main events from 15 laps to 15 minutes plus one lap, went into effect at the season opener at Anaheim. But, as we pointed out before the start of the season, the opener is typically one of the longest races of the year and wouldn’t be affected much by the change—if at all. And it wasn’t, with the 250 leaders running 15 laps, and the 450 leaders running 20—the same number as previous years. The races in both classes were longer than any of the previous three years, but it wasn’t a huge change. That will be seen later in the year.

“It wasn’t too different, other than my mechanic writing, ‘five minutes plus one’ or ‘three minutes plus one.’ It was pretty much the same,” said Yamalube/Star Racing Yamaha’s Aaron Plessinger. “We did 15 or 16 laps. It was just about the same. It will be different once we get to a shorter track, or longer motos, more laps.”

“For me, I actually liked it [the new timed-format] pretty good. You weren’t just focusing on the laps, just trying to hit everything as perfect as we could,” said Rockstar Energy Husqvarna’s Martin Davalos.

Honda HRC’s Ken Roczen seemingly was in cruise control mode en route to one of the biggest wins in the history of Anaheim. His 16.2-second route was the largest margin of victory at the opener since Chad Reed’s 21.4-second win at the 2008 opener. Since 2009, the average margin of victory at the opener is 4.9 seconds. Roczen beat that by 11.2 seconds!

“It’s hard to expect something like that [a big lead], but I can tell you that I had no doubt in my mind, and that’s ultimately what helped me out a lot,” he told the media after the race. “But at the same time there’s a lot of good guys out there. That’s what I mean the entire time with keeping the focus. That’s what I’ve done. I never got too excited. Just tried to stay calm and trust my capabilities.”

Red Bull KTM’s Ryan Dungey followed his 2016 Anaheim 1 runner-up finish with another one this time. Dating back to the Phoenix Supercross in 2015, Dungey now has 33 podium finishes in the last 34 races—his only blemish a fourth coming at East Rutherford in 2016. The podium was also Dungey’s seventh in eight 450SX openers. (He finished fourth in 2015.) But he’s also never won the opener!

“The track was kind of pretty tough tonight. It would reach out and bite you a little bit if you tried too hard,” he said. “So I just tried to play it cool and just put my laps in and no mistakes and gauge where I was at and see where Marvin was. I tried to play around with that a little bit. But overall I’m happy with the race.”

It's no surprise to see Roczen land the fastest time, you can also see that Eli Tomac was trying to sprint with him early on lap four. No one else was close on their lap time, as Dungey's typical consistency saw him log his best lap much later, on lap 11. On that 11th lap, Dungey was actually slightly quicker than Roczen, and he brought his teammate Musquin with him. But Dungey followed that 1:03 lap with a 1:06, as did Musquin due to having to roll the triple on a red cross flag. Roczen stayed in the 1:03s to keep extending his lead on lap 12.

Darned close in lap times between Plessinger, Davalos, and McElrath. Note that Jeremy Martin, after a terrible start, got going much later. Will be interesting to see these guys race it out again.

We know the field is always stacked at the opener, and that means some talented riders aren’t in the lap charts because they didn’t make the mains. Here are a few notables.