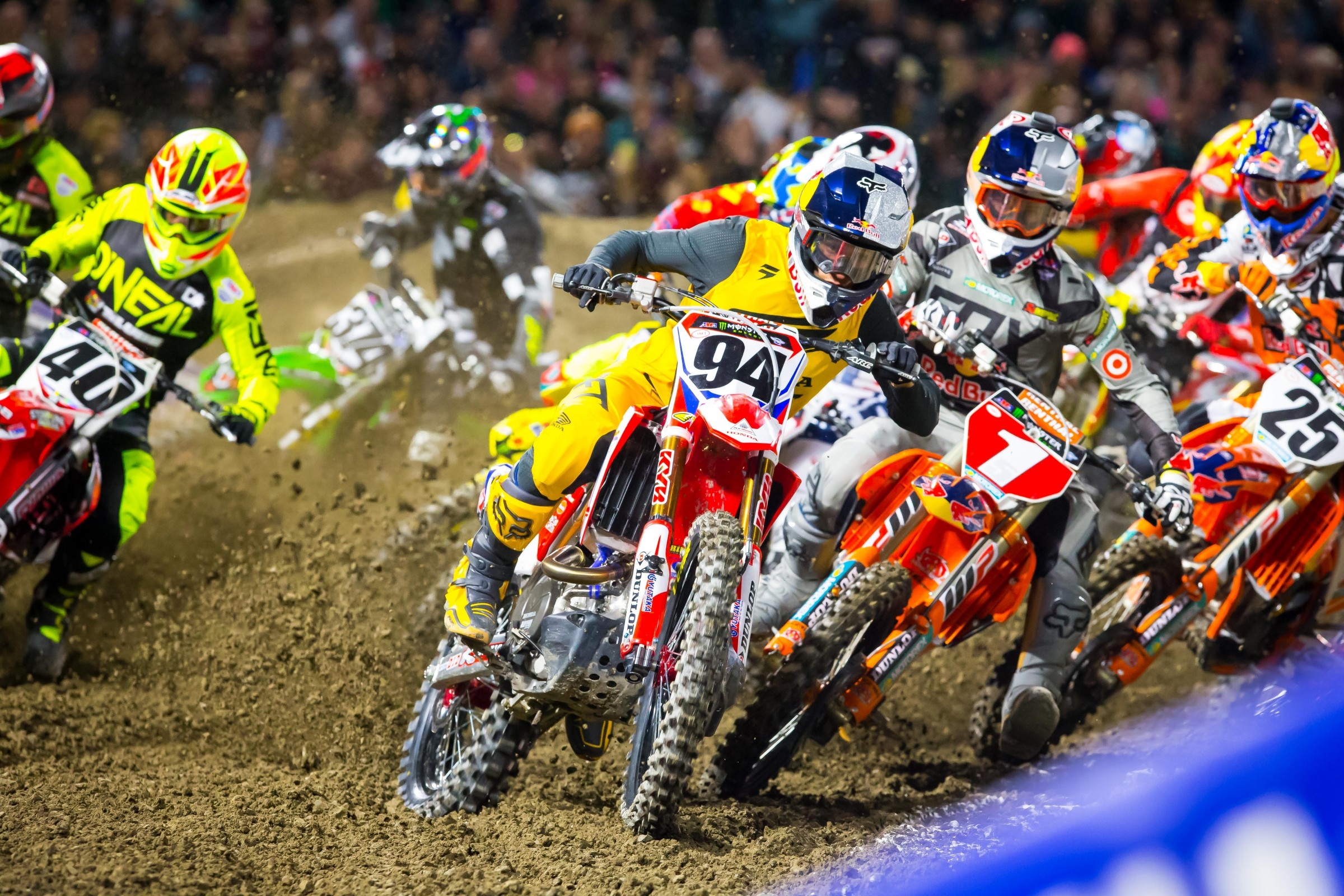 The first salvo in a monumental showdown has come and gone. Defending Monster Energy Supercross Champion Ryan Dungey may be in for his biggest challenge since the departure of Ryan Villopoto. Dungey’s current nemesis, Ken Roczen, has been very vocal about this being his time to shine. Kenny feels that Ryan’s reign has come to an end, plain and simple. The torch is always passed eventually, but rarely is it so resolutely disagreed upon as this season. Dungey is still in his prime and wants no part of Roczen’s hostile takeover. The clash of the titans is underway, folks. The interesting part of this story, however, is that it’s not a head-to-head battle. It’s not just Roczen, the challenger, versus Dungey, the champion. This is Ken Roczen versus the Aldon Baker army. Kenny and his alternate path are waging war against Baker and his disciples. It’s not just about the results. This is as personal as dirt bikes get.

This battle has been brewing for a while. Kenny has made no attempt to hide his contempt for his old program with Baker. He wants to do it his way and is ready to tell the world all about it. He has taken it a step further in many cases, disparaging Baker with comments aimed at cheapening some of his success. Kenny owes Aldon nothing and is well within his rights to speak his mind. He knows more than most of what was working and what wasn’t. While departing the program was surprising, I think more surprising was the vitriol he has shown in the time since. I think Kenny was really stung by all the comments from outsiders saying he made a mistake by leaving. He had his reasons. There is clearly bad blood between the two camps and it’s spilling into the 2017 season. As Kenny dominated last summer, he became more emboldened and vocal, leaving no doubt that he had found what he was missing at his former home. He wanted the world to see and know that this is his time.

The other side of this coin is Aldon Baker and his crew of Ryan Dungey, Jason Anderson, and Marvin Musquin. Collectively, they make up the best chance to knock Kenny off his perch. It’s peculiar to even write that because Kenny doesn’t even carry the #1 plate. Dungey is the reigning champion and won in convincing fashion over Kenny the last time they raced this series. That’s not how the momentum seems to be flowing, though, is it? Kenny has adopted the attitude of the champ and Baker’s boys are the ones out to derail him. It’s an interesting flip-flop of the power flow chart. Kenny won all summer long, showed incredible speed in October, and by his own words alone has taken over the alpha role. It reminds me of an old adage, “If you say anything enough times, it becomes true.” (Knowing this, don’t mind me while I chant “I will be tall … I will be tall …”)

Anyhow, the dynamic we now have is shaping up for nothing less than all-out war. Kenny wore a suit and tie to the Thursday press conference. Big deal, right? Well, yes and no. I saw it as just another advance in his, “I am the guy now” offensive. How his suit wearing and NSX driving was perceived may be slightly different. Jason Anderson has made light of Kenny’s press conference attire in recent days, comparing him to the outspoken Irish MMA fighter, Conor McGregor. Surely Roczen’s comments, attitude, and also his incredible riding are big topics of conversation around the Baker compound. If nothing else, Kenny is providing endless motivation for this group. In football, this would be called bulletin board material. One thing is for sure—Kenny is making the most of his time at the self-perceived top of the food chain.

How will the trio of Dungey, Anderson, and Musquin respond? That’s the question in the mind of every fan this week. It says quite a lot about this battle that Roczen won the opener, and the three Baker riders finished second, third and fourth. They all fought valiantly on Saturday, but just didn’t have the pace to combat Roczen’s blitzkrieg. They will have to find a bit more raw speed, especially in the opening laps. Kenny is so good at opening the early gap, giving himself breathing room and disheartening everyone in his rear view mirror. Going into the main event, the last thing those three could allow was a Roczen holeshot and the clear track it provides. If this was NASCAR, Kenny’s car would be considered nearly unbeatable in “clean air.” He is so confident in where he is correspondingly to his competition. The only chance to beat him is to unsettle that picture-perfect execution. All three of the Baker’s boys are good starters and will get another chance next Saturday night.

There are many that don’t like the comments that Kenny has made in recent months. I have been taken aback at times myself. Regardless of what I or anyone else thinks, Ken Roczen backed up his talk at Anaheim 1. He will now be tasked with continuing the onslaught as everyone looks to find holes in his game. Aldon and company will be building a game plan to win this title. With a track record that includes supercross titles in 2001, 2002, 2003, 2005, 2006, 2009, 2011, 2012, 2013, 2014, 2015, and 2016, are you willing to bet against it? Maybe not, but Ken Roczen sure is. I imagine Roczen is approaching their game plan just like Mike Tyson once did: “Everyone has a plan until they get punched in the mouth.” Ring the bell already, I’m ready for more.