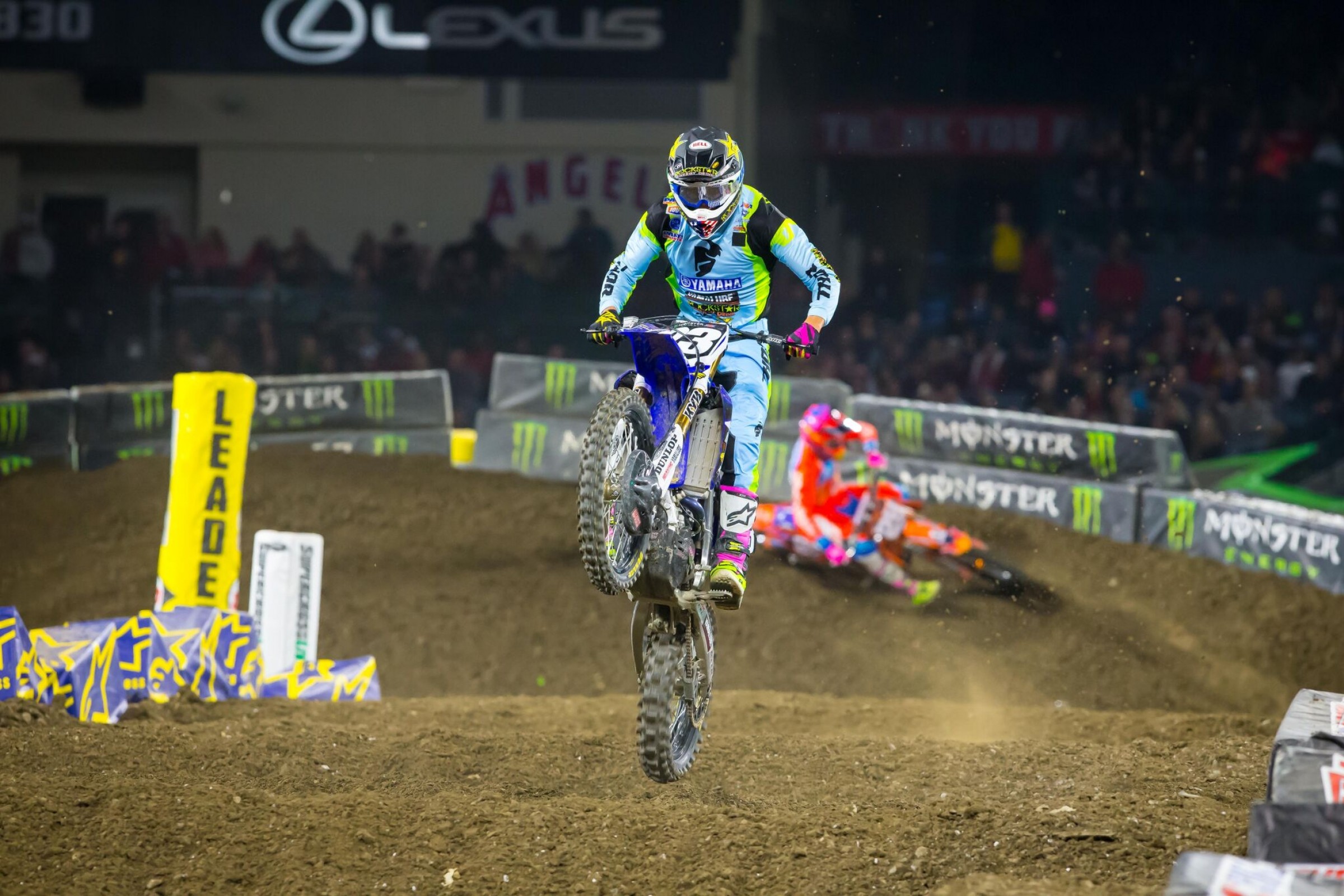 Racer X: How was your day?
Aaron Plessinger: Kind of struggled in practice a little bit [with] bike setup. Kind of just went back to the basics for the races. It was good. I got off to a good start in the main. I think I was sixth or something but I passed a couple people and got into second. Tried to chase down Shane [McElrath] but there wasn’t enough time. Have to get a better start in San Diego.

You’re riding good. What’d you think about the track?
At first the track was weird. The dirt was loose and stuff. I remembered it from '15 but it shaped up for the night show and had some good lines. It was pretty fun.

Are you happy to be back on the West Coast?
Yeah, actually it’s a change of pace and a change of atmosphere so hopefully I get to go to some East Coast rounds and get back into the push.

Was that your decision or no?
No, it was actually not my decision. I was actually projected to race the East Coast and actually Colt Nichols was riding really good but he crashed and broke his femur and needed surgery. So they flip-flopped me and him. But I’m happy I did the West Coast.

What’d you think about the 15-minute moto and the change-up with all the timing and everything?
It wasn’t too different, other than my mechanic writing, “five minutes plus one” or “three minutes plus one.” It was pretty much the same. We did 15 or 16 laps. It was just about the same. It will be different once we get to a shorter track, or longer motos, more laps.

Martin Davalos: For me, I actually liked it [the new timed-format] pretty good. You weren’t just focusing on the laps, just trying to hit everything as perfect as we could. I struggled a lot with bike setup today. Just trying to adjust to this hard-pack condition. Definitely I need to work on some things over the week going into San Diego, but I got to give it up to the guys that were in front of me. They rode a better race and I did as much as I could, without risking the first race. So I’m happy I was able to get on the box. It’s a long season and I look forward to challenge them every weekend and all the riders that are going really good. – Jason Weigandt

Racer X: It seemed like it was a pretty solid day overall.
Weston Peick: It’s nothing to be mad about, but obviously it’s A1. I got out with a top-10 finish and that’s points on the table for a long season. I’m happy with that. Keep it just like that, consistency and work towards the top five. Just keep building week to week. It’s been a good day.

What happened there with Reed? You guys were close a lot of the race.
I was in front of him pretty much the entire race and we were going back and forth. Half the track he was faster than me, half the track I was faster. So we just kept going pretty hard. He ended up running into me because I went outside after the sand and he went inside and he thought I was going to back down, and I was not backing down. So we collided super hard. I freaking looped out. I think he almost went down. That happened and then the red cross flag was coming out. It was the second time coming around and I was slowing down. He saw that coming, saw me slow down, and he T-bones me in the turn.

He hit you again?
He hit me again. That’s when his radiator blew.

So you hit the first time and then you kept going, both of you and then he hit you again?
Yeah, because the red cross came out. The second time around he came right into me and T-boned me again. I think that was when they said his radiator blew.

Did you lose any spots because of that or anything?
No, I just lost probably five seconds to the guys in front of me. I think we were catching Davi [Millsaps, in seventh] and then that happened. It just threw me out of whack. After that it was like, just finish. – Jason Weigandt

Racer X: First supercross. Walk me through your day.
Austin Forkner: It was pretty good. Well, I guess it wasn’t really that great. I think I was sixth in qualifying which is okay. I’ve never really been the best qualifier. Got a good start in the heat. Started second, finished second. Kind of battled up there with the front guys. In the main put myself in a bad position. Didn’t get a good start. I was just back there with those guys banging bars and I think I was in fifth, sixth, seventh area and kind of had a guy come over on me a little bit through the whoops. I braked so I wouldn’t hit their back wheel and I kind of got a buck at the same time that I braked and nosed into the next whoop. I was on the front brake, too. I was on both brakes hard and dropped the nose in. It just completely knifed whenever I hit. I went over the bars and landed on a Tuff Block, so I was fine but I landed in a mud puddle and the bike was covered in mud. The bars were down, lever was up. Kind of didn’t have two very good laps after that. I kind of went into panic mode. But I settled down and relaxed and ran lap times that were just as good as the leaders and actually ran the fastest lap time of the race. I got eighth. Not exactly where I want to be, but I got the first race out of the way. I’m actually really confident going into next weekend.

You rode great, especially considering the crash. What was the most unexpected thing that happened today that you didn’t really anticipate?
Really nothing. I was bummed after qualifying because I wanted to be up there more inside the top three, but I’ve never been that great of a qualifier so it didn’t really bother me that much. But nothing really surprised me. I knew those guys would be aggressive. They are pretty aggressive, so I’m just going to bring the heat next weekend and for the rest of the season.

Was that a triple that you almost did coming out of the first turn? I thought I saw you try and triple that.
I did it in practice. That was kind of on one of my laps that wasn’t very good. Just kind of came out of the turn and was pissed off. I just hit it and tried to make it. Obviously didn’t make it. I like framed it. After that I kind of got myself together, gathered it up, and settled down. That’s whenever I started clicking off good laps. So I’m ready for San Diego.

Does it feel good to get the first one out of the way finally?
Yeah, it feels good and now that I know what it’s like. Obviously not the way I wanted to start the season with an eighth but we’ll move on and I’ll try to just start clicking them off and getting some podiums.

Is there anything you want to change for next week at all?
Put myself in a better position in the main, that’s it. – Kyle Scott

It was good in qualifying. I qualified ninth, and then fifth in my heat race. For my first supercross race I felt that was pretty solid, but in the main event I think I was 11th or something and ended up getting tangled up with another rider and went down. I got back up and got 13th. Hopefully I can do better next week.

You can’t be bummed though. This is your first race.
I’m definitely bummed. I had higher expectations. It’s something to build off of though, and I guess I can only go up from here.

But there were some good riders who didn’t even qualify tonight.
That’s true. Qualifying and the heat race, for my first supercross, went very well. But the main event just didn’t go as planned.