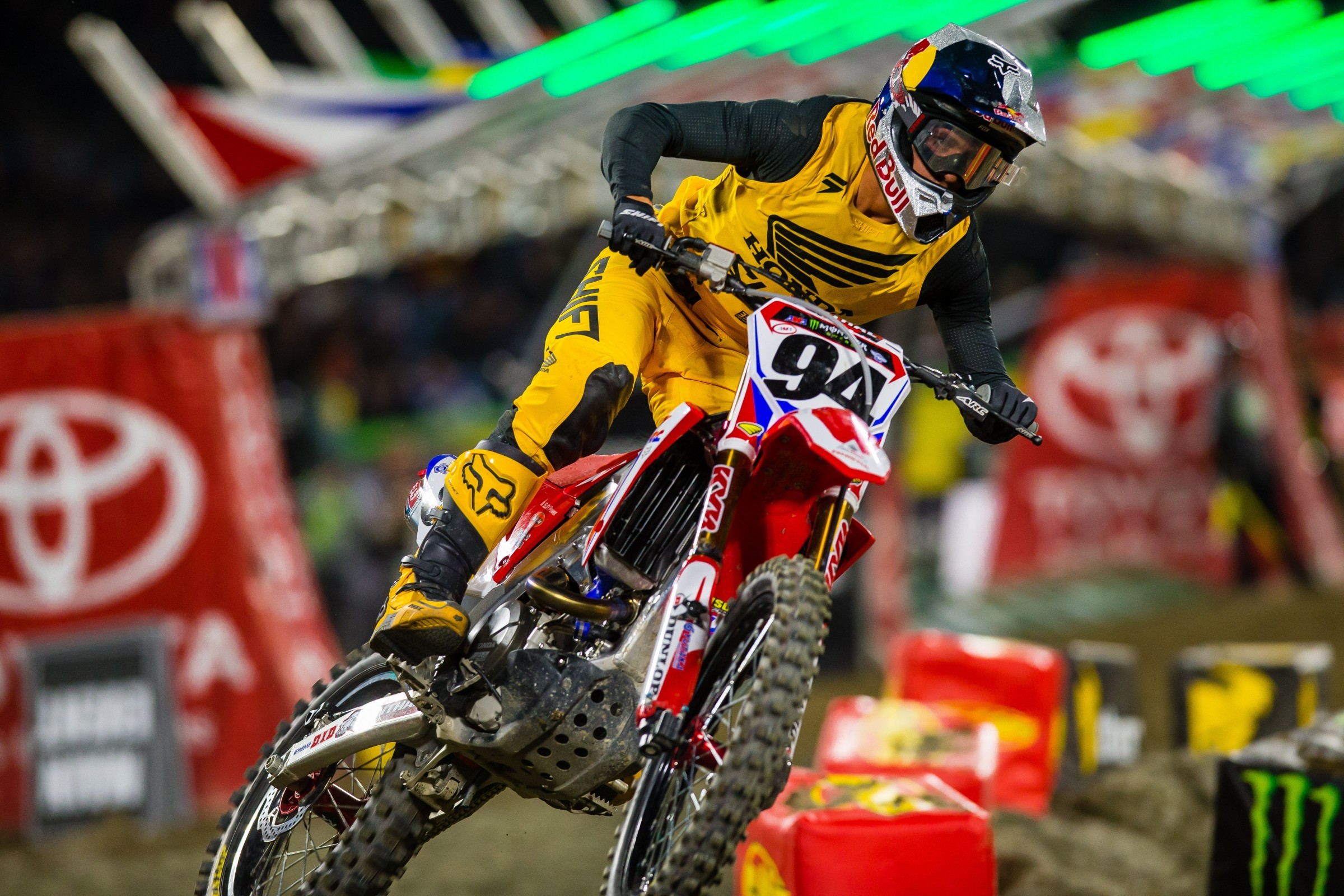 Honda HRC’s Ken Roczen has generated a ton of buzz in the off-season, from his switch to Honda, to his momentum after a Lucas Oil Pro Motocross Championship and near Monster Million bonus at the Monster Energy Cup. Rolled together, he seems to have developed an edge, getting somewhere into that void between confident and cocky—he knows what he can do, and he keeps showing it.

Anaheim 1 was just another, as Kenny won the main event by a whopping 16 seconds over Ryan Dungey. He led every lap. But at the post-race press conference Kenny's confidence was subdued, and there wasn't a hint of cockiness at all. Maybe that edge has been overstated and it's really there—or maybe in a long season, he's being sure not to get too far ahead of himself, no matter how far ahead he was at the opener. Read what he had to say at the post-race press conference and see for yourself.

Racer X: Could you each take me through your race and just tell me how it went?
Ken Roczen: The race went good. You could really tell that for this year—well, I guess it’s always going to happen—but they kind of tamed the track down quite a bit more. I think it was a good idea because obviously during practice the transitions were really soft [due to rain earlier in the week]. So it made it difficult on us no matter what. I think in general right now it just makes for better racing. Overall it was good. I got two good starts. Actually messed up a little bit on the second start but I could kind of muscle my way through and get a clear track. Pretty much just focused on myself. Tried to not make mistakes. The track got rough and it was hard underneath and really peppery on top so it really required a lot of focus and not to do any mistakes. Overall I’m really happy with how it went. We’ve got to keep our head on our shoulders and look forward to the next weekend. It’s good. It’s fun to celebrate our first win but there’s a lot more races to go. We’ve just got to keep the focus.

It’s technically your first race on the bike. You raced Monster Cup, a different type of supercross track than here. Is there actually stuff you learned today since it is one of your first runs on it? Is there room to improve maybe?
Totally. I was kind of hoping we would have a free practice because I haven’t ridden since Tuesday so that’s kind of a long time. It just took a little bit of time to get used to it, especially coming on a track like that. It was really soft obviously in practice. Just kind of weird a little bit. Believe it or not, for us, not riding since Tuesday is quite a long time not being on the bike, but I wasn’t stressing about it at all. I just made some tiny little adjustments and it worked out good. I wasn’t really messing around with the bike too much because I’m really happy where I’m at. That’s really the best for me to do that, then I’m just going to leave it. But at the moment I’m just having a lot of fun. The team is a good time. They’re working hard. It’s all the details that make me super happy. Right now there’s really nothing to complain about.

Ken, two part question. One, over a 16-second gap on the win. Did you expect to come in and win against the competition and have such a dominant win? And the second part, is this the type of race you like, to get out front, run your own race or do you prefer to have a battle?
It’s hard to expect something like that [a big lead], but I can tell you that I had no doubt in my mind, and that’s ultimately what helped me out a lot. But at the same time there’s a lot of good guys out there. That’s what I mean the entire time with keeping the focus. That’s what I’ve done. I never got too excited. Just tried to stay calm and trust my capabilities. The second question, about what type of race I like, it’s kind of tough because sometimes you have a bigger gap and you tend to make little mistakes but it was nice to obviously have a gap. It just gives you a little bit of breathing room, but also there is enough time for error. Sometimes when you’re battling with somebody it keeps your focus a little bit sharper, but I had no problems tonight with that. It was fun because you couldn’t really over-ride the track so I wasn’t breathing hard or anything. It was one of those races that could have just kept going. It was good, but I think in the near future we’re going to see tracks being a lot more tacky and we can push more. It’s going to be a lot of fun. It was definitely a little bit of a different Anaheim than I’ve seen it before.

Kenny, early in the race you ran a 1:01, 1:02. It looked like you found something. Was there something on the track you found early in the race?
Not really. I kind of was doing the same thing the entire time. The only thing where I kind of started … well, not messing up, but I tried to find something different in the whoops, just a little bit of a different rhythm, so I tried to kind of jump it one time and that didn’t work out at all. So I kind of lost a little bit of ground, so I just went back to what it was doing before and just took my time and tried not to rush them. Like Ryan [Dungey] said, they [the whoops] got really steep and had like a curve. So if you messed up it could give you a pretty good kick and you might find yourself on the ground. So I just kind of kept doing the same thing I was doing. I felt like I could have gone actually faster, but at the same time there was no need to really push the envelope.