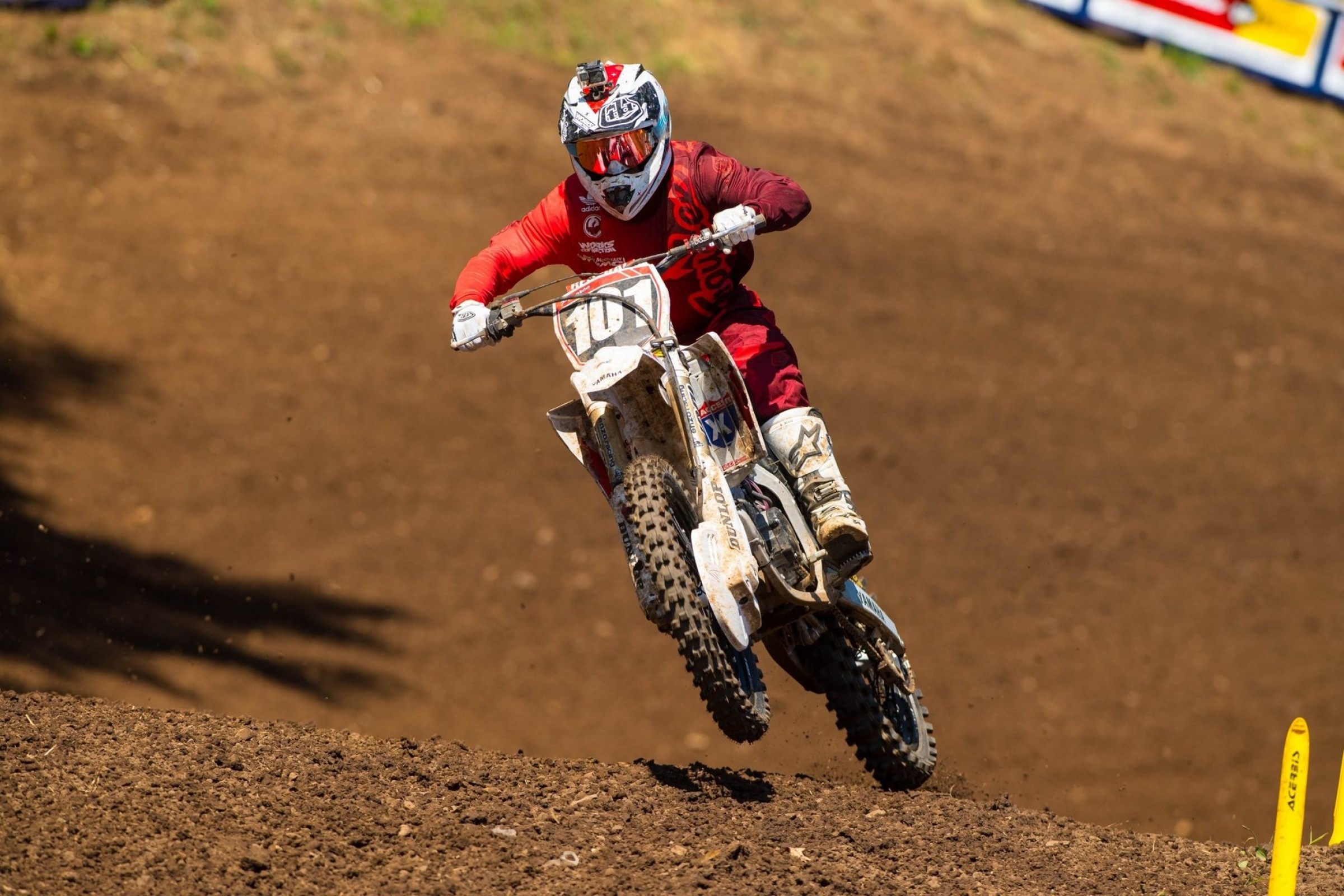 Here in the Pittsburgh area we are blessed to have an indoor track at Switchback Raceway. It allows some much needed throttle twisting during the typically crappy winters here. That said, the jumps are on the steep side and open in the middle, making us older guys a little nervous and in the way during practice days.

Do you have any tips to help us navigate these obstacles, and perhaps not so badly embarrass ourselves? I've been riding some technical mountain bike parks (Ray's MTB in Cleveland) and am stiffening up my clickers. Other than that I need a little help! Would you recommend a little more sag than usual, slightly lower gearing, and maybe 14 psi in both tires? With just big impacts and no stutter bumps, I imagine we can get away with these things on an AX style track. How about technique?

What you need is some more talent and a deduction of a dozen birthdays or so. Both of those things are going to be tough to come by, however, so I’ll see if I can steer you in the right direction. Your sag shouldn’t change from where you normally run it so leave that alone. Your compression clickers are where you are really going to get the biggest benefit. Take a good flat-blade screw driver and turn your compression adjusters in until they snap off. You’ll probably still be a little on the soft side but it will be better. Consider turning your rebound clickers in a couple clicks as well. Leave your tires at 12 or 13 psi. Try to stand up as much as possible and don’t use your clutch as you exit the turns. That last part will be difficult at first but it will help smooth you out. Finally, hold your line if you aren’t doing a certain jump or if you’re just going really slow. Good riders will find their way by. Bad riders may land on you either way so buy good protective equipment. I guess that was the last bit of advice. Have fun.

With Wil Hahn’s retirement and a question last week about whether past champions could still hang if they came out of retirement, it got me thinking about when I experienced the epiphany that I had reached my own personal pinnacle as a fearless, hang-it-all-out-there motocrosser.  I was doing some woods riding and found myself on a narrow long straight away, head down low over the bars, fifth gear pinned on a KX500 (yes I am that old) when all of the sudden this little unwanted, unwelcomed, resent-it-to-this-day, voice inside my head said to me, “Hey, you could get really hurt if you lose control.”  Fear of getting hurt snuck in, unrequited fear and that was it; I still ride but I have set limits.  Do you remember such a moment when you knew you were done competing at the highest level (by the way, huge respect for that)?  Also what the hell is up with those “Ask Ping” photos each week; you and the bike are perfectly clean, not a spec of dirt stuck to your gear?  Either you are photo shopping yourself in or all these pictures are taken on the first lap.

So you were hauling ass on a flat piece of ground when you had a moment, huh? Yeah, I had a moment where things changed for me as well. I was fresh off a win in Anaheim and feeling pretty good about myself. I was half a lap from winning a heat race in Arizona when my piston split in half on the face of a triple. When you’re 30 feet in the air and riding what had become basically a 200 lb. door stop into the ground on a supercross track you have some time to ponder things. What the hell is happening right now? Hey, that girl is pretty cute up in the stands over there … I wonder if she likes guys in a cast? Did I leave my oven on? I wonder how badly this is going to … !#@$%%$%$#%. Ouch.

As I sat in the local hospital that evening I knew I would never be the same. We have to turn a blind eye to reality in this sport to be really competitive. Professionals have to feel like they are in control of the situation; like they determine what happens 100 percent of the time. And you can’t think about what will happen if things go wrong. The moment you start to weigh the risks, the time is right to quit. I realized that night how much was truly out of my control and the risk began to outweigh the reward. I made it through one more season with marginal results and I was done. In the brilliant words of my favorite television character, Nick Miller … “No Ragrets.”

Oh, and those pictures are probably from bike tests and intros we do where I don’t have anybody roosting me. If it makes you happy I’ll rub some mud on my gear before the next one.

What is the deal with gear companies and their dual jersey gear sets? I see riders and racers having skin tight jerseys on, and then they put a bib/over shirt with the sleeves cut off over it. What's the hype about these things? The companies say "The future is now and don't get left behind," but I see this as pointless, inadequate, and a waste of money. Instead of paying for 1 jersey, now they expect me to pay for two jerseys as well as pants that add up to a complete gear set that equals over $300?! With prices like that I better be dropping three seconds off my lap time and getting over 700 likes on Instagram. So what do you think about the dual jersey and bib/over shirt setup? I've seen many companies do it. Is it the future and worth all the hype?

Come on, you know the answer to this, Sam. When you eat Skittles do you really taste a rainbow? Are you really “Lovin’ it” when you’re at McDonald’s? De Beers diamond company says that a “Diamond is Forever;” I’ll bet about 50 percent of folks who have been married would argue that. My point is that skinny jeans for your arms and a polyester tank top is not the future of moto jerseys, it’s a marketing campaign. If you like the way it looks and feels then buy it, but don’t expect your lap times to plummet.

And, Sam, you and I both know you don’t have 700 followers on Instagram so let’s keep it real. You know what’s always the future in motocross? Going fast. You can wear anything you want and if you are going fast enough it will look cool. Except a denim jacket … those are never cool.