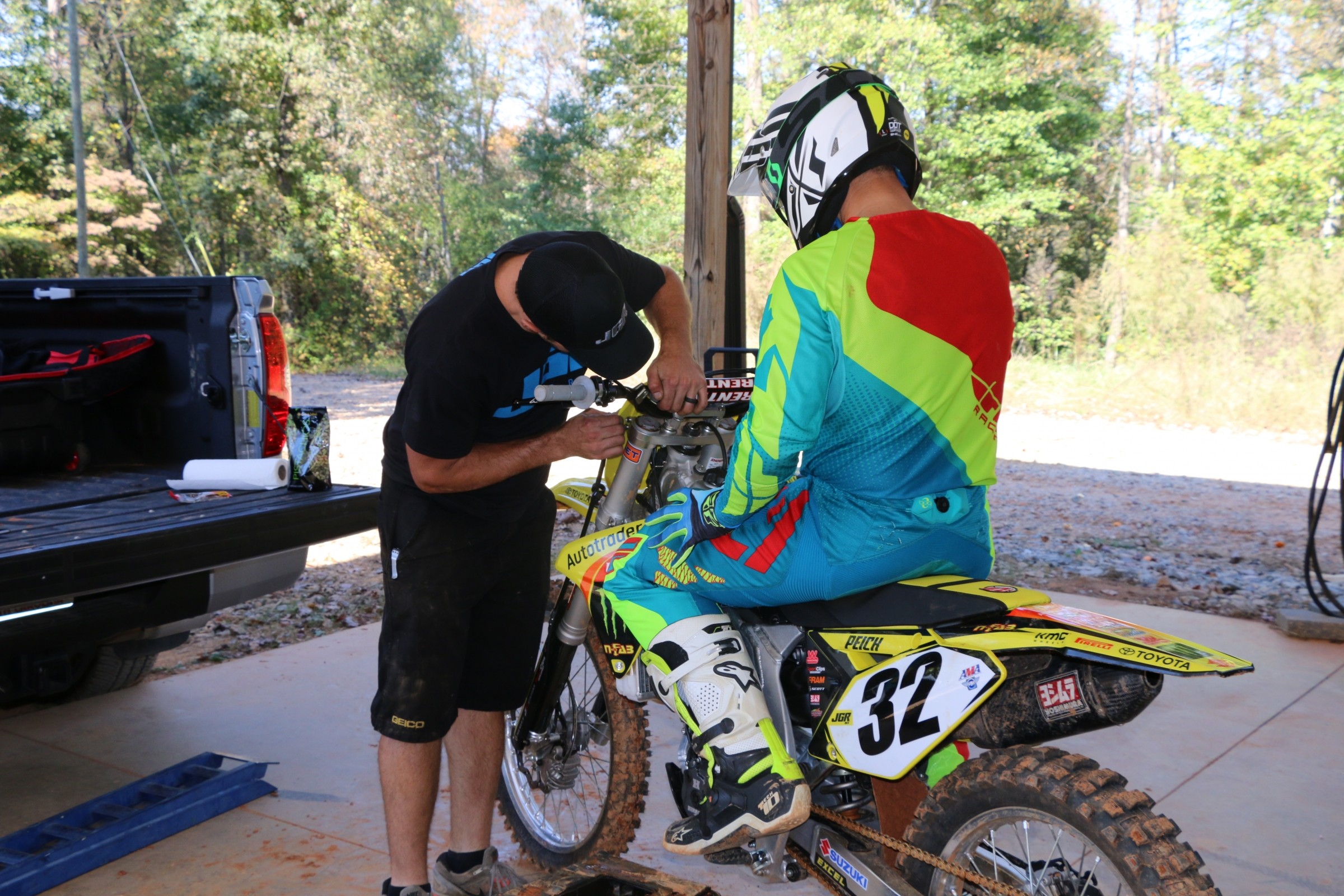 It’s not a normal off-season for the Autotrader.com/Monster Energy/Toyota-backed Joe Gibbs Racing MX team. For the first time since the team’s start in late 2007 (debuting in the 2008 racing season) the squad won’t be racing Yamaha YZ450Fs. A month ago, the team signed a new deal with Suzuki, so now there are RM-Z450s under Justin Barcia and Weston Peick.

I stopped by the JGR test track last week to watch one of Peick’s first test sessions back east on the new bike. Peick has spent about three weeks in his native California trying some parts and settings, but now the team has enough new stuff to try that it’s worth coming east … barely.

There’s a real ration of parts going on right now as the team tries to build and gather material. For example, last week Peick and Barcia were focused on engine testing. Peick tried a new camshaft. Since the team only has one of each cam, they had to swap cams from Barcia and Peick’s machines so they could each try both. One guy rode a bit with one cam, then they swapped it into the other rider’s bike and let him try some laps. That’s not typical, but it’s a good way to speedup the process and close the net around the optimum engine setting.

Solid day out @milestonemx back on the Suzuki, stoked to be signed with @jgr for 2017 and the new partnership with @suzukicycles its going to be one hell of a year and years to come.

The team is confident they have time to get it all worked out by Anaheim 1. Last week Peick tried some different motors, then tried different cams and air boots. Still to come is some extensive mapping work. Suffice to say JGR’s engine department and team sponsors are working hard to compile data after nearly a decade of working on Yamaha engines. Plus, engines are only part of the equation—chassis and suspension work also needs to happen.

It did help that JGR built motors and suspension for the Butler Brother’s MX team in 2012. Although BBMX wasn’t asking for the full-factory-level engine work back in those days, JGR did develop some baseline settings and kept the notes. They even kept the dyno jig to bolt up and run Suzuki motors. But really, this task is handled the old-fashioned way: Peick and Barcia have to ride the bikes with each setting to determine what works for them. Dynos tell some, but not all, especially in the case of 450 engines, which can be built to produce massive power on a dyno—but need to be tuned to make that power manageable in the hands of the rider.

By the way, the Suzuki/JGR announcement also includes a 250 component. It’s likely Phil Nicoletti will be racing 250SX East Region for the team, and someone else will race 250SX West Region (we’ll take an educated guess and say that will be Matt Bisceglia). JGR won’t be as involved in building those bikes, though, as the 250s will be built and developed at the Yoshimura shop in California. JGR will just give those bikes a place to live on race day. Hey, at least we’ve got a real Suzuki 250 “factory team” out there again.

Overall, it’s very early in the marriage between Suzuki and JGRMX. This is more work than simply refining a bike that already has a ton of development. But change is new and exciting, and at the moment the team seems super pumped on the move. Isn’t everyone pumped on new rides in October? We’ll see how it turns out by January—but between now and then, expect many more long days at the test track and in the race shop.