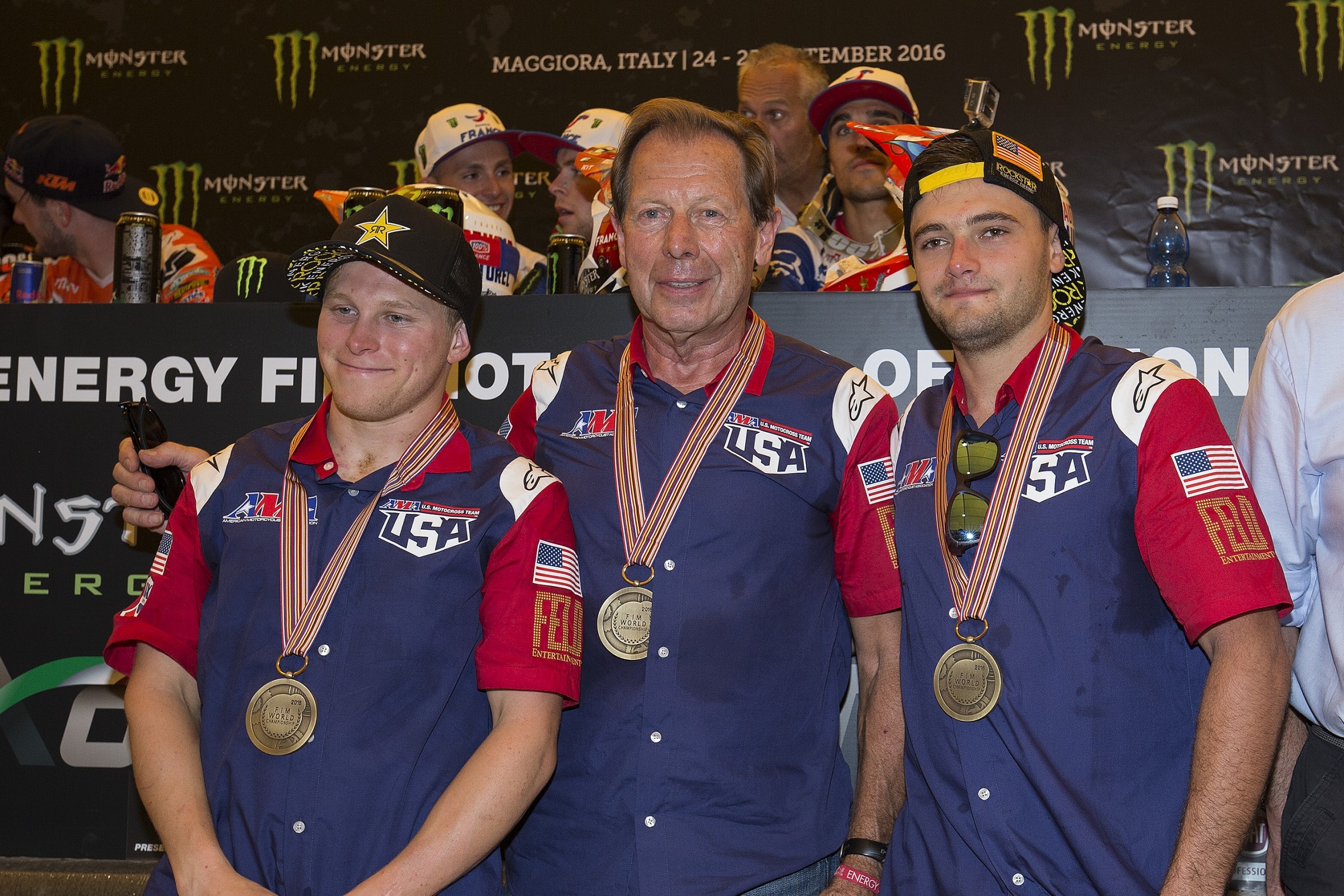 Breakdown Fingernails on the Trophy

Leaving Ernee, France, last year, I wasn’t angry. Even though America had lost the Motocross of Nations for the fourth time in a row, I was at peace because the team of Justin Barcia, Jeremy Martin, and Cooper Webb was truly the second-best team that Sunday. Team USA rode valiantly and gave everything they had but on home soil, fielding perhaps their best team ever, France was simply better. There was nothing to be sad, mad, or disappointed about. I was content with what I watched and knew that the American team left their best effort in western France. However, leaving Maggiora yesterday, I just don’t feel that the results painted the picture of what I witnessed firsthand. France won again and will always have that fact, but for my money, America was the best team on Sunday.

At times last weekend, I really didn’t think America had much of a chance. The Saturday qualifying was abysmal with nearly anything and everything going wrong. Every rider on Team USA crashed and Jason Anderson even broke his foot to stamp an exclamation point on a horrific opening day. The end result was a 15th place in qualifying, ensuring poor starting gates all day Sunday. Even more troubling was the riding itself. The American riders simply didn’t seem to have the pace that their stiffest competition did. They were multiple seconds a lap off the lead pace and couldn’t find any room to pass even the most modest of competitors. It was difficult to watch and surely even more frustrating for the riders themselves. The mood on Saturday evening was somber when it came to those wearing stars and stripes.

Sunday morning started a bit more upbeat as the Americans seemed to find some speed. I was hesitant to read too much into it, though, as practice on Saturday started in much the same way. Anderson was able to ride somewhat normally, however, and that gave America a puncher’s chance at worst. As the gate dropped on the first moto, I was hoping that things would just start off positively and keep a realistic chance at success for the rest of the day. That was accomplished as Cooper Webb secured a fourth place finish and Alex Martin fought hard to get to ninth after a terrible start. It wasn’t ideal, with France’s Romain Febvre winning and gaining a valuable point but Alex did beat the other Frenchman, Benoit Paturel, keeping the deficit reasonable. The first moto ended with America in second position but firmly in the thick of it. With Belgium leading the way, America in second, and France in third, I liked how this was turning out. Our boys had turned it around after Saturday and anything was now possible.

Moto two was incredible. As Jason Anderson rocketed out of the gate and into the lead, I couldn’t help but yell each and every time he went by. He was overcoming his pain and the frustration of Saturday’s crash and injury. He pulled a nice lead early and for a moment, I thought he might check out entirely. He was running laps in the 1:53 range, dropping the hammer in an attempt to gap his rivals. A few laps in, I noticed Jeffrey Herlings find his groove and begin to beam in on Anderson. His confidence grew as the gap shrunk, a standard theme for motocross. There are few better feelings for a rider than seeing that gap shrink lap after lap, and conversely, the sickening feeling for Anderson as he watched Herlings reel him in. To his credit, though, Anderson never faltered. Lap after lap, Herlings stalked the American, inside and outside. He made several attempts but Anderson remained poised. He never made a mistake, never gave Herlings an angle. Finally, possibly out of frustration, Herlings blinked, crashing while exiting a very slippery corner. He would remount and still hold second to the finish but for Anderson, the job was done. He had stared Herlings down on a world stage and never cracked. He rode conservatively towards the checkered flag to meet his cheering team and celebrate an Open moto victory, or that was the plan anyway. Just as he crossed the finish line, he slowed to raise his arms in celebration. He was in the moment, surely overwhelmed by what he had just done. Unbeknownst to him, catastrophe lurked just above him. Japan’s Chihiro Notsuka decided to jump the finish line on that fateful last lap, his line sending him right onto Anderson. Regardless of whose fault it was here, the result was horrific. Anderson was left concussed and hospital bound, and America left without their third man for the final moto.

"As he lost his balance and steered towards the hay bales, my mouth uttered the word “nooooooooooo”, much like any tragic movie clip." - Jason Thomas

The throw-away moto, which was previously a ninth from Alex Martin, would now be Anderson’s Did Not Start for moto three. The scenario had completely flipped for Team USA. Had Anderson been healthy and riding momentum into moto 3, Cooper Webb would be in a low pressure situation. He wouldn’t need to be a hero in the last moto, he could simply ride a solid race well within his capabilities. Team USA held a five-point lead going into that last moto and there was absolutely zero reason to believe anything would have changed with two healthy riders. The mood in the team had changed drastically entering that final moto. Several members of the team were leaving for the hospital while others were trying to get Webb ready to race, but the entire team was disheartened by what they had just witnessed. To say the situation had been turned upside down would be a massive understatement. Team USA still had a chance to win but it was simply a different outlook than it should have been. They were fractured and worried about Jason Anderson, so Webb was now going into the final moto with the weight of a nation on his back. Not only would he have to deliver, he would also have to hope that France couldn’t muster two good results themselves. As they lined up for that fateful final race, I have to admit I wasn’t optimistic. All of the leeway that America could have enjoyed was now gone. Webb was under far too much pressure and outnumbered at that. I just didn’t like our chances and the math looked bleak.

As they rocketed out of the gate, Webb got off to a decent start, running around fifth. More importantly, both of the French riders were behind him. Paulin was buried but Febvre was moving forward quickly. Febvre was going to be a force, of that I was sure. He was on a winning pace all weekend and I felt that he would catch Webb at some point, and he did. Paulin, however, wasn’t as impressive to me, just as he hadn’t been for much of his HRC stint. As the opening laps were logged, that was the two-pronged crux of it. Could Webb keep Febvre under control and behind them, would Paulin be able to find any sort of momentum? Lap after lap, Febvre stalked Webb. He tried every line possible but Webb, much like Anderson fending off Herlings, countered every attempt. The track (I ran a lap on foot afterwards to see for myself) was in complete disrepair by this point. The holes in the jump faces were dangerous at best, helping Webb guard the good line and making Febvre’s life more difficult. Paulin, meanwhile, was still struggling in 11th place, unable to catch Jose Butron in 10th. Could America pull this off? I was starting to believe.

When the two lap board came out, America had a two-point lead. Two short laps, that’s all “we” needed. The texts were already flowing in that we were going to win. I was as nervous as I have ever been in my own races. I knew the track was a mine-field and the pressure Febvre was applying had to be wearing on Webb. My only hope was that he somehow knew that he didn’t need to make any desperate moves in order to win. Just keep the status quo—in fact, Webb could have been passed by Febvre and Team USA still would have won, but he surely wasn’t doing that kind of math mid-moto. As he came out of the turn that had earlier bitten Herlings, they climbed into a left hand turn carved into the side of the mountain. Cooper’s front tire washed just before the rut, seemingly in slow motion. As he lost his balance and steered towards the hay bales, my mouth uttered the word “nooooooooooo”, much like any tragic movie clip. I have to admit I didn’t see the rest of the race. I was knelt down staring at the floor, so many thoughts running through my head. Mostly I felt for Cooper. This was going to hurt. No one would have to tell him, he would understand the gravity of the crash. I felt for Anderson. His choice for the Open spot had been questioned by many and he had delivered beyond anyone’s expectations. Then he was stripped of that in the cruelest of ways. I felt for Alex Martin, too. He had done his part, beating France’s Benoit Paturel in both motos, putting his underpowered 250 into the top 10 both times out. But that last lap and a half were a blur for me, I can’t imagine what the riders and mechanics were feeling.

Leaving Italy, the chaos of the day was coming into focus. Last year, America was simply outmatched by the French. I have no doubt of that and a tip of the hat should go to them for being the deserving winners. This year, though, I don’t feel the same way. I felt America bounced back from Saturday’s disaster and put in a winning level performance. The record books won’t show it and European fans will claim sour grapes, but that’s fine. I was there and I know what I saw. After four years of being beaten and deserving to finish where they did, I don’t think America was necessarily beaten on Sunday. Give Anderson a decent finish (sixth or better to be safe) in the last moto (keep in mind he had the second best lap of the prior moto and was the moto winner), and America wins even with Webb’s crash. Ifs and buts and all of that, I understand, but this was not France in 2015. America lost it more than France won it. The Chamberlain Trophy resides in France but in my heart, we brought it home on Sunday.