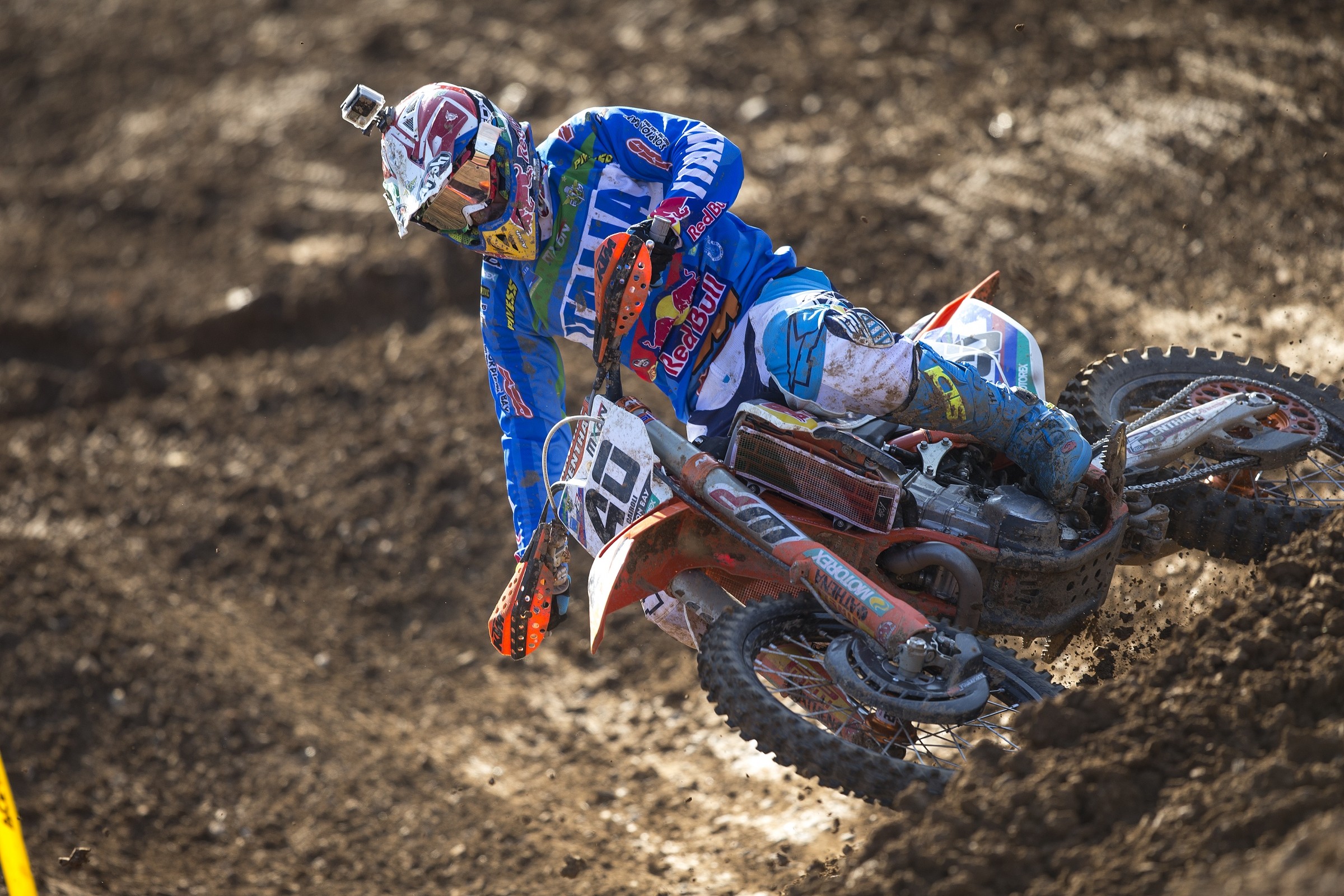 Tony Cairoli is MXGP royalty now, but lately, his throne has been hit from a variety of sides. You’ve got young talent like Tim Gajser, Romain Febvre, and Jeffrey Herlings coming up, and Tony himself has endured a few injuries. For the Motocross of Nations, his other Italian teammates weren’t of the caliber to challenge for the team victory, but “AC222” still wanted to go out and win for the home fans. He got the MXGP overall with 2-2 scores, but missed out on the moto wins to Febvre and Herlings.

Steve Matthes talked to Cairoli after the race.

Racer X: This was a little bit like Glen Helen. We talked after Glen Helen. You rode fantastic and you just have to sort of tip your visor to the guys that beat you today because you did just about everything you could to take the win.
Tony Cairoli: Yeah, the weekend started perfect. Yesterday I was leading the qualification with a good confidence. I was working good the past week before the race and I was confident. Unfortunately I hit the ground pretty hard yesterday and I was beat up. This morning when I wake up I was feeling just pain everywhere and sore everywhere. I didn’t have really the feeling to race, to be honest, because it was very difficult for me.

Did you hit your head?
I hit my head and my back and my shoulder and my leg. It was pretty big hit. I’m getting older so it’s difficult to recover. But actually I rode good; I rode well. The pace was there. Just missing some laps, some minutes on the bike that should be there. I was closing the gap both motos to the guys in front, but it was just not enough. But anyway even if I win, nothing change for Italy. We didn’t have a good team. To be honest it’s difficult to have motivation at a race like this where you know that top five is okay, that’s your goal, but I want to be on the podium.

I spoke to you at Glen Helen about it. If you could change the team selections, if someone asked you, you guys rode well but you might like some different teammates?
Yeah, we didn’t agree much with the team, but in the end it worked well. Also the other guy did his best and he’s very young on a 450. So he did very good and we are happy about this, but we are still far from the podium. But anyway it’s okay. Race in home country in front of such amazing crowd, is just fantastic.

Third moto you caught Jeffrey a little bit there. Did you make a mistake? Did he pull away? He kind of pulled back out on you a little bit. What happened there?
There was some sections of the track where I couldn't really put weight on the legs because of the hit yesterday. I was just riding very strange and he was pulling away always. Another part of the track where it was more technical I was coming closer to him, but it was not enough. I was just doing it like a spring, always trying to come closer. But anyway we know that he’s good. He won the championship. He’s training very hard. He’s on the top form at the moment. We’re going to try to be better next year, that’s clear, and try to be again in front.

Is it hard to race here in front of your home fans? It’d be an incredible feeling, but all your friends, all your family, all your passes, things are going on. Does it take away from the racing?
It’s very difficult. I had a lot of media events and I couldn’t walk the track. Normally I always walk the track and see lines and this and that. I just stay in the motorhome all the time and run to the bike when people screaming at me. “Oh, you don’t stop for us!” and this. It’s tough for me. I give a lot of time to the fans always but it’s very difficult on this kind of event to focus on the race also.

You almost took the win in both motos. It was one of the crazier des Nations I think I’ve been to. Netherlands had it, France had it, USA had it, then France got it again. It was a crazy race.
Yeah, I was hearing the speaker talking so I was just following a little bit. When I give up in the last two or three laps I was just following the speaker. It was going crazy with France and USA and Holland. So it was just nice to have a des Nations back here at this track. It was very spectacular. Congratulations to the teams for the great job they did and also for the organization. Also the Canadian riders did always good starts.

We got 10th!
It’s great, congratulations. Amazing starter [Kaven Benoit], I have to say. I hope Canada also can do better next year than this year.