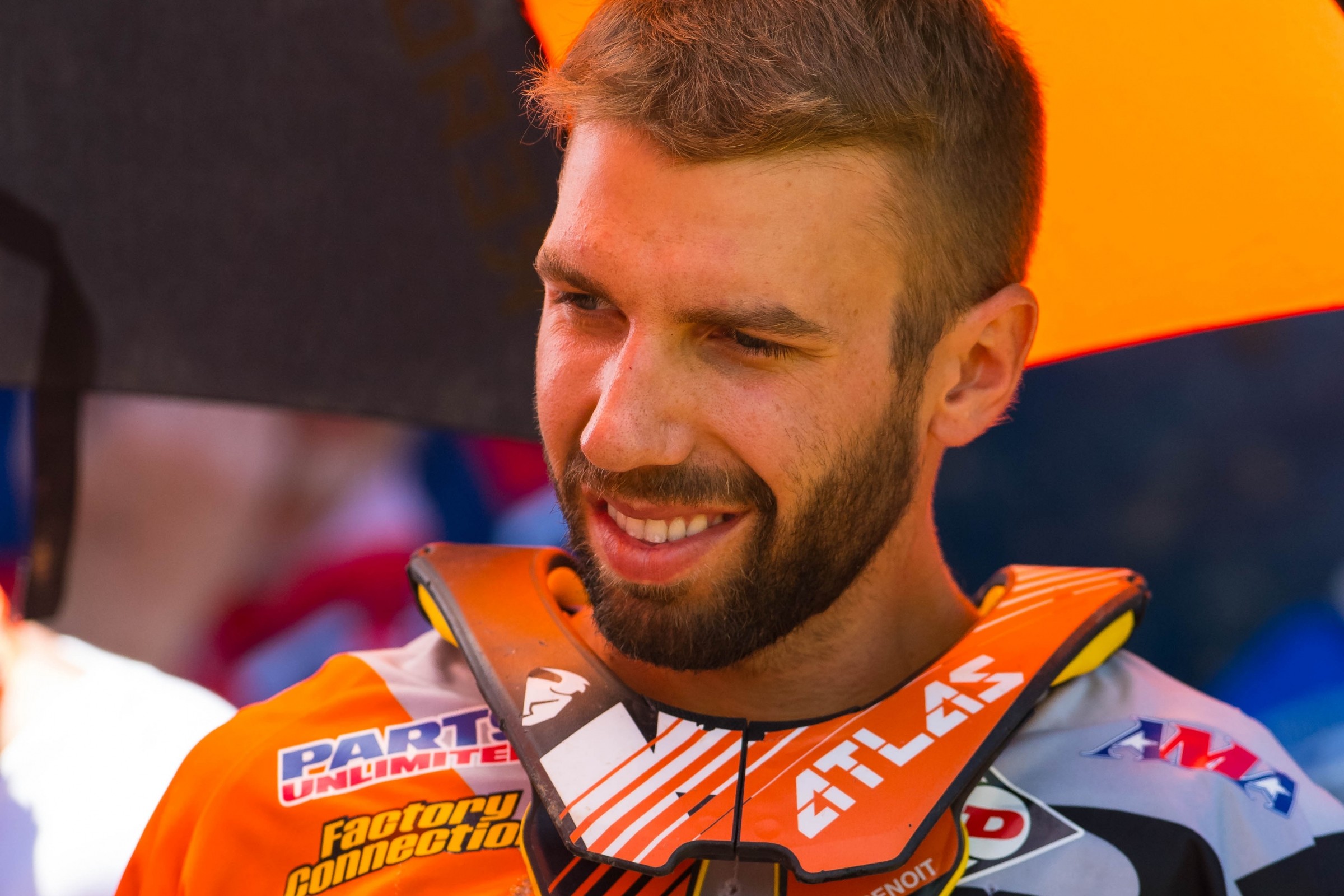 The “Who the heck is that guy” award at the Motocross des Nations was no doubt Canada’s Kaven Benoit. Getting great starts all weekend long, the KTM Canada rider helped his country to its best finish in over a decade with a 10th as Benoit went 8-12 for sixth overall in the MXGP Class.

Team Canada has a mixed history at this event, often not sending its best team, often not being organized, not shipping bikes or whatever, but new team manager Kourtney Lloyd did a great job in renting a vacation house for the entire team so they could come in early and ride a couple of days on their race bikes. After the race I caught up with the “star” of the show—well, in my eyes anyways!

Racer X Online: I think you had everyone asking me, what’s the story with that guy? You really put yourself on the map. Rode up front. You've got to be stoked.
Kaven Benoit: Yeah, I’m really stoked. I was confident coming into here. I had a good season at home. I feel really good on the 450 and I felt that it was going to be a better des Nations for me on the big bike than it was on the little bike a couple years ago. The weekend started off pretty good yesterday—good qualifier and good starts all weekend. Doing a top 10 in that first moto, I was really happy about that.

Yesterday you were running second for a while and then crashed, but still, your lap times even after picking up were right in with everybody else.
I belonged up there I think and I had to tell myself that I belong up there. For sure there are lots of people that are probably asking themselves who I was. That’s cool. It’s a great feeling. Looking forward for next year. Hopefully I’ll be able to make it again and improve our results.

Did you get the inside gate positions both times?
Yes, I did.

How was the track during the last moto, pretty rough?
Yeah, it got pretty rough. I didn’t get the greatest start. My other motos were better, but still was top 10. I tried to run the pace with the guys. When Gautier Paulin passed me I stuck with him and I tried to pick his lines. I followed him for a long time and at the end I didn’t have much left in the tank. Mentally I was getting tired, and physically too and just making mistakes the last two laps. Lost him and still I got a 12th so it’s respectable. I’m happy.

Let’s mention the intimidation thing. Big names all around you, in front of you, behind you. You were giving [Romain] Febvre fits all weekend.
Yeah. Yesterday I was holding my lines a bit more. Today in the first moto I did open the door at some point but I was thinking about the overall picture. I didn’t want to go down with any of these guys and it was just I wanted that confidence booster to just try to get a solid finish. Sometimes I maybe should have held my line a bit more but overall I’m happy. It’s good confidence for me. It’s cool.

Tenth place, too. It’s cool for the team. [Shawn] Maffenbeier, Tyler Medaglia. Tyler had his chain come off. Maffenbeier put in some good rides. Tenth overall. You were a huge part of that, but that’s an awesome finish.
For sure. I think it’s our second-best finish from what I heard. We’ve improved a lot from our last couple years. It’s a bummer that Tyler’s chain came off. Maybe it would have been a bit better. I don’t know; I didn’t see the points. All the guys rode awesome. It was a fun trip. Thanks to Courtney and Lori for organizing all that. It was just an awesome trip.

I’ve been coming to these for a long time. I think this was one of the better Team Canada tents, personnel, camaraderie, and all that.
For sure. We had so much fun this week at the house. We were just hanging like a family every night having dinner. It was really cool. It was my best des Nations so far for sure result-wise and just the atmosphere too.

So Gauldy was bad? [Laughs] (Ryan Gauld is a buddy of mine and was the Canadian manager in 2014)
No, Gauldy did a great job. I just think everybody was saying bad things about Kourtney’s idea about the house and stuff but it was a big difference I think. Just as a group and we had some sort of a house to be at, a home. It was good. We had an awesome week and looking forward to next year.