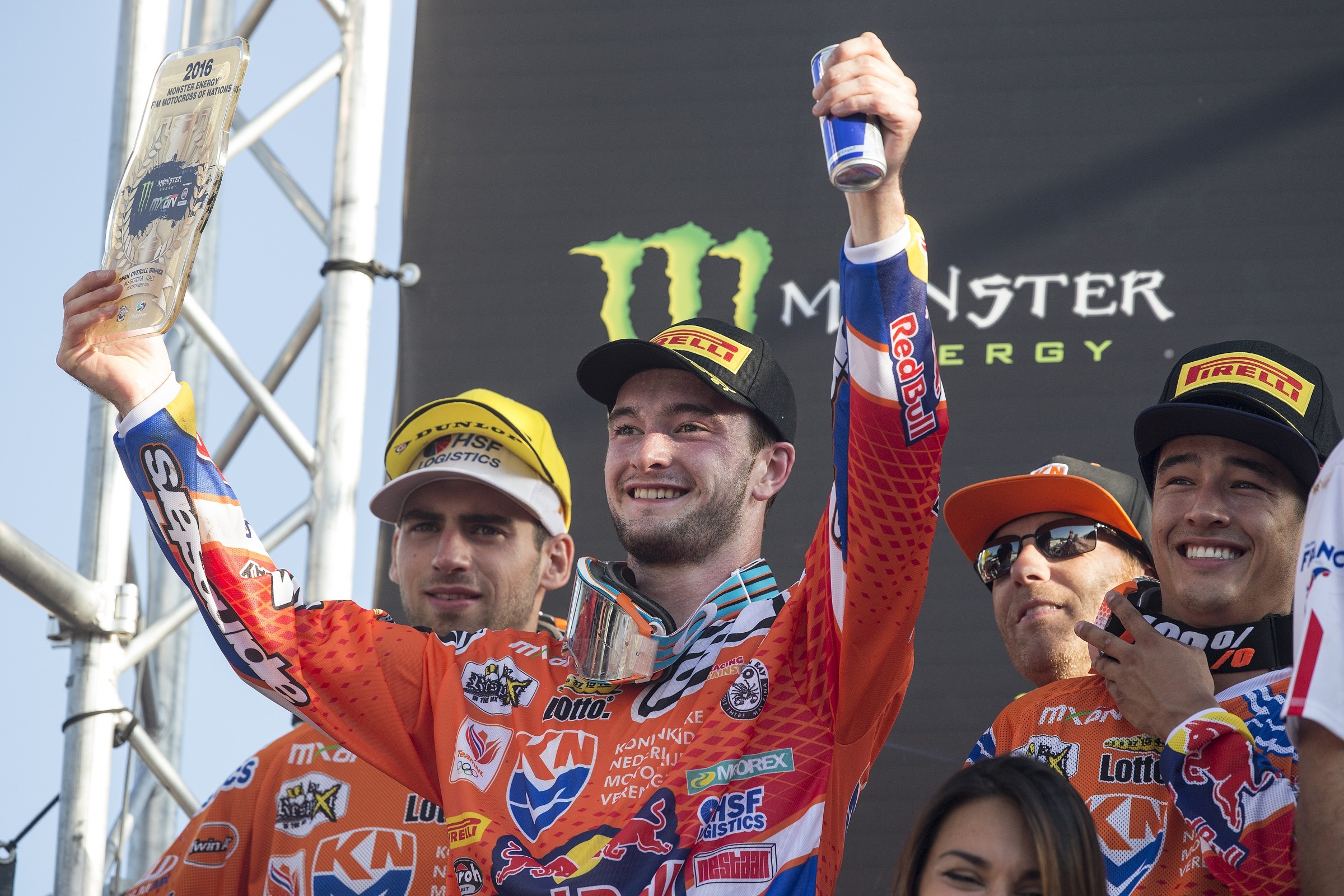 Romain Febvre, Tim Gajser, and now a tease from Red Bull KTM’s Jeffrey Herlings—is MXGP hovering on the bridge between generations? A pass to a new, young territory of aggression and speed? The Dutchman’s 2-1 at Maggiora Park last weekend revealed a promise-laden debut on the KTM 450SX-F ahead of his first term in the premier class of the FIM Motocross World Championship due to start again in Qatar, on February 27, 2017.

Herlings’ efforts on the bigger bike were hardly a surprise. His dominance and skills in MX2 for the last seven years (three titles, 61 GP wins, and a seven-year unbeaten streak at his home Grand Prix, all by the age of twenty-two) means we are talking about one of the world’s most formidable motocrossers.

At Maggiora, there were some signs of apprehension. Despite missing the chance to represent his country each year from 2012 due to injury or operations, Herlings was reluctant to compete in Italy and make his big bike debut on a high profile stage after minimal testing time since the MXGP season closed down in Glen Helen two weeks ago. A request by KTM and a semblance of national duty prevailed and he encouragingly rode to pole position on Saturday.

The #84 contested several Dutch Championship fixtures on the 450 this season but the MXoN was the first examination for his potential by the many thousands watching. Herlings hunted down Jason Anderson in the second moto, but a crash with nine minutes left on the clock meant a calmer second place. In the third and final sprint he had Tony Cairoli for company but still showed a dust-free pair of heels to the crowd favourite.

We grabbed a few minutes with the in-demand World Champion—still coated in champagne—right after the post-race press conference.

Racer X: Did that win in the qualification heat on Saturday banish some nerves on the 450?
Jeffrey Herlings: Well, I’ve been in front of bigger fires but it was definitely hard to get used to the [race] bike in less than a week. I spent just four days on it. We made some good steps in that time but our set-up still isn’t great. We had a decent enough base and through the results I think I still showed I was the fastest guy across the weekend. We still need to test but everything is looking quite positive for next year.

You caught Anderson quickly and were ready to pass him in the second moto [MX Open/MX2] but then crashed. What happened?
I was very close to him a few times, but it was definitely tough to pass [cleanly] on this track. I just high-sided out of a turn. My bars were a bit bent and my levers were down so I just played it safe and came in second. It was a shame I could not win that moto, but overall I think we did well today.

What was going through your mind chasing Jason? After all we’re talking about one of the top athletes on the AMA scene.
I felt like I could go faster. I worked my way up from sixth to fifth and then shut down a five second gap to be all over him everywhere but I just couldn't find a line to pass. I thought he was getting tired and I was planning an attack two turns after the place where I crashed and I knew I had to be right alongside. I got close, got some roost, and had that little high side.

Leading the second race, what was it like dominating on the 450 compared to the 250? Much of a culture shock?
It did feel different. I know if I holeshot on a 250 then it will take a couple of laps but then nobody would be close to me anymore. This time Tony was there and stayed in distance. It is something I will have to get used to for next year and that there will not be many rounds where I can just pull away. Also that it won’t be possible to win each race. In MXGP if it is possible to win a couple then that is already a big thing. I think it will be a huge change [for me] going to the big bikes.

Lastly, it was a fantastic way to end another memorable—for the right reasons—year.
Yeah, right now it doesn't feel as good as it should because we were just one point away from winning this thing! We did well, but I’m a bad loser! Anyway, I won the Open Class and I think we can still be proud.