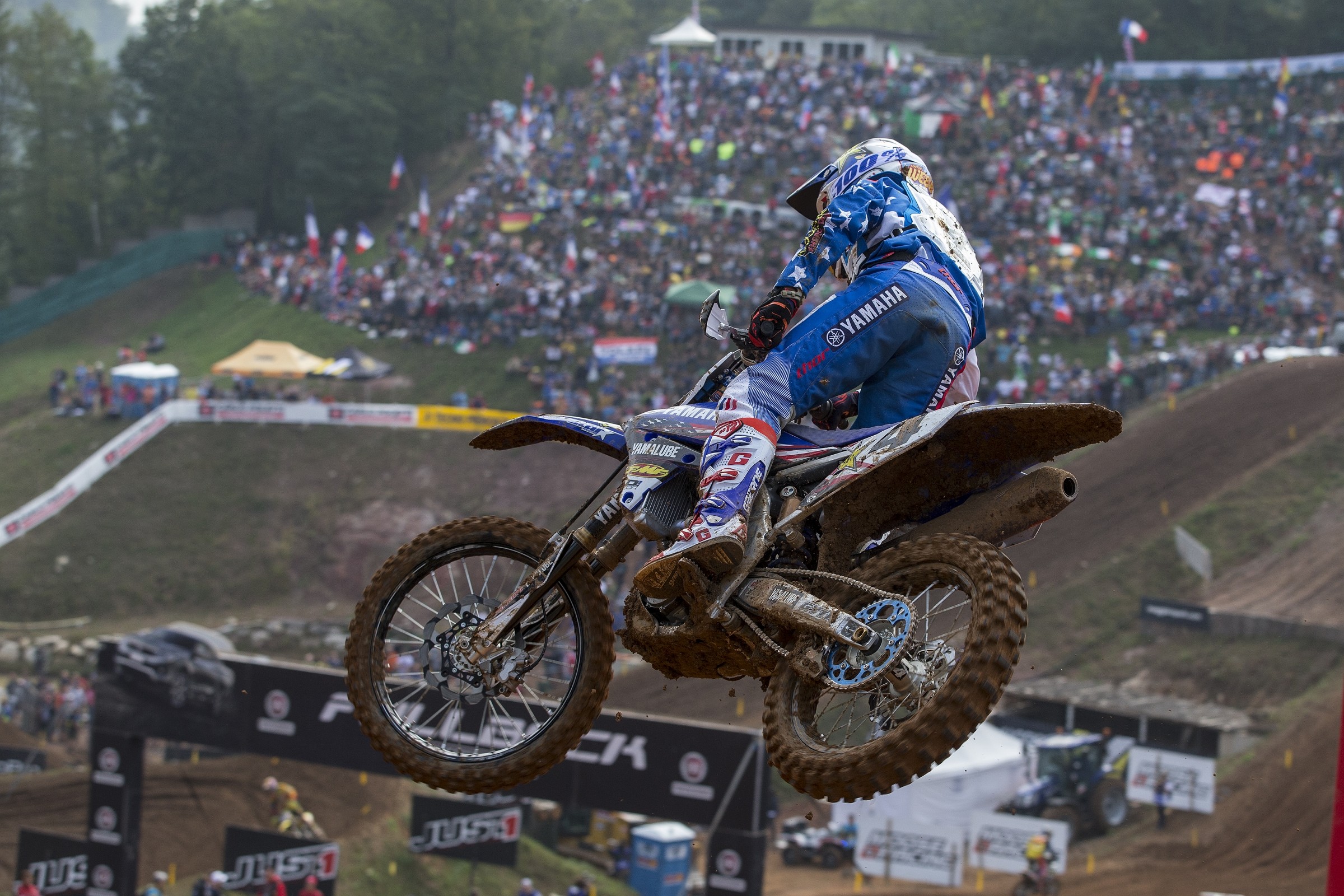 After yesterday’s tough luck and bad results in qualifying, Team USA was left with bad gate picks for today’s first moto, and so the tough times continued. Off the start, Holland’s Glen Coldenhoff grabbed the early lead ahead of home favorite Antonio Cairoli and Canada’s Kaven Benoit, but Americans Cooper Webb (MXGP) and Alex Martin (MX2, on a 250F) were way back, Webb around 14th and Martin outside of the top twenty.

The Italian fans got what they wanted as Cairoli started to close on Coldenhoff for the lead, and then he made the pass and the fans went nuts. But France’s Romain Febvre was on the gas, working past Benoit to third and following Cairoli’s every move. Febvre had a sweet outside line he used to make passes, and once Cairoli got Coldenhoff Febvre quickly picked him off as well. Then Febvre went for the lead on Cairoli and used the same outside line to get it. At this moment, France was looking good on points, as the team’s MX2 rider, Benoit Paturel was in 12th.

But at the halfway point, the Americans were back on the radar. Webb broke into the top 10 early and then started picking riders off, culminating in passes on Benoit, Coldenhoff, Cody Cooper and more. He was fourth and tried logging a late charge to get Belgium’s Kevin Strijbos for third, but he didn’t have enough to make it happen. Still, it was a great salvage effort, and then Alex Martin did the team just as well, rising from 20th to 10th, passing France’s Paturel along the way.  With two to go, Martin dug deep and passed Cody Cooper to take ninth—making him the second-best MX2 rider on the track. All told, Webb and Martin’s charges were enough to vault ahead of France for second in points.

But Belgium leads the way, powered by the top MX2 rider, Jeremy Van Horebeek, with a strong second. And MXGP rider Kevin Strijbos charged from about 10th to third, giving Belgium just eight total points, compared to Team USA’s 13 and Team France’s 15th. But Belgium has a big hurdle to overcome in the second two motos, with Brent Van doninick, normally a MX2 rider, having to jump on a 450 for the Open Class in place of the injured Clement Desalle.

Moto two will feature the Open and MX2 class, so Jason Anderson, who we hear is riding with a broken bone in his foot, will make his first start of the day. Alex Martin goes to the line also, and we hear Team USA will give Martin the better, inside gate pick. Jeffrey Herlings, who dominated yesterday's Open qualifying race and had the fastest lap time this morning, will also race. Herling's Dutch team has a shot thanks to the solid sixth from Coldenhoff in moto 1, but MX2 rider Brian Bogers was 20th on his 250F in moto 1.

At the last moment, Team USA decided to switch up the gate picks and give the better gate to Jason Anderson instead of Alex Martin—and it paid off when he grabbed the holeshot! The Rockstar Energy Husqvarna man started pulling away early ahead of Arnaud Tonus, while Jeffrey Herlings made some quick passes to get to third. Gautier Paulin of France was fourth ahead of Evgeny Bobryshev of Russia and Australia’s Dean Ferris.

Belgium led the points after the first moto but needed a result from Brent Van doninck, who is riding in place of the injured Clement Desalle. He started around ninth which was solid, but then crashed out of the race, severely damaging Belgium’s hopes. But once again Van Horebeek was on fire in MX2, running seventh overall for most of the way and getting close to picking off some more 450s before the finish. His seventh means Van Horebeek was the top 250 in both motos.

Up front, Herlings was on the charge and got to second, then caught Anderson and the battle was on. Herlings took multiple shots to get the lead from Anderson but then he crashed! From there Anderson was free to go with the moto win…but stay tuned on that.

Behind Anderson, Herlings recovered for second but a huge battle broke out for third between Tonus, Ferris and Paulin—and Paulin pulled through with a huge late-race charge to get to third, which is clutch for France. Meanwhile, Alex Martin did yeoman work through the pack on his 250 to snag another ninth from the 35th starting gate. He was the second 250F again, and at that moment Team USA was looking at a solid points lead going into the final moto.

Then, disaster struck. In an moment that will surely be relayed, remembered and discussed for eternity, Anderson crossed the line with the moto win. He rolled the finish line and pumped his fists, and then was landed on a by a lapped rider!

It was a vicious, terrible hit to the head and back, and Anderson rolled off the side of the track and into a hole seemingly knocked out. He was eventually able to stand and walk, but was attended to by track medics and then headed into an ambulance and left the track. We hear he might have a concussion, and is most likely done for this final race, pending a miracle.

Team USA isn’t out of it though, because they get a drop score, and Webb and Martin had consistent results combined with Anderson’s moto win. They can drop Anderson’s DNS for moto three and have to hope France’s Febvre or Paulin struggles and finishes outside the top ten in moto three—if Webb does really well.

Anderson doesn’t line up, which leaves it up to Webb to try to get a great score and hope Team France makes a huge mistake. And both French riders, Febvre and Paulin, get terrible starts, which opens the door. Meanwhile Herlings gets the early lead over Cairoli. Webb starts around fifth and is close to Dutchman Glenn Coldenhoff, but a charging Kevin Strijbos passes Webb and takes fifth, then keeps going.

Frenchman Febvre starts to make moves and is seventh, but Paulin is stuck in the pack, in about 12th, he gets to 11th but can’t go any further. With a 7-11, France is too far back, but with Webb only sixth, suddenly The Netherlands, with Herlings leading and Coldenhoff fifth, find themselves leading the event overall.

In the second half of the race, Webb and Febvre start to go to work, trying to claw for points. Webb tries a move on Coldenhoff, can’t get him, then tries again with a very aggressive pass and makes it happen. Now Team USA is right there with The Netherlands, plus Tony Cairoli puts in a charge from second and catches Herlings for the lead. Coldenhoff starts slipping a few spots, pushing The Netherlands further down. Now it’s between France and Team USA and The Netherlands, and with Webb ahead of Coldenhoff and Febvre, Team USA has it. In fact, even if Febvre makes the pass, it won’t be enough to for France to win.

Then, in an instant, it went totally wrong for the U.S. Webb was pushing hard and caught Brit Tommy Searle for fourth with Febvre all over him. Suddenly Webb missed a rut with his rear tire, his bike stepped out, and he crashed. Febvre, Coldenhoff and several others went past him, and just like that Team USA went from winning the race despite having Anderson in the hospital to losing it all with one lap to go. Absolute heartbreaker.

At that point it looked like the Dutch had it behind Herling’s moto win, but with Febvre getting Webb when he fell, and then pulling off a super clutch, heroic last-lap move on Searle to steal fourth, it was enough for France to vault ahead of the Dutch to win the event for the third year in row.

But this one is going to sting badly for Team USA, which lost Anderson in a tragic crash but still had it in hand nearing the final lap of the final moto. Then Webb fell, and with it the chances of the win.

Heartbreak. More to come from Italy.