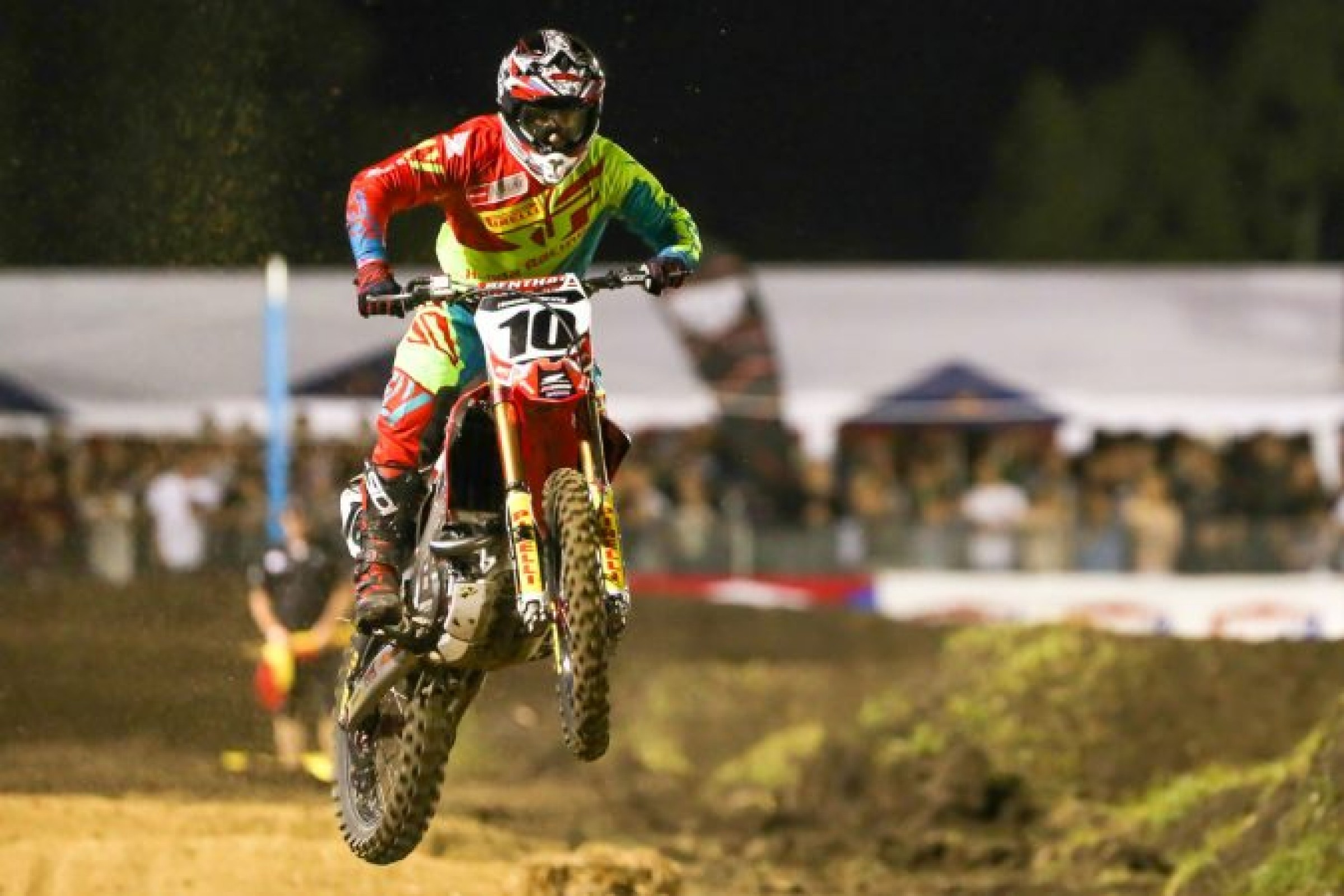 Justin Brayton was good in 2016 for the BTO Sports/KTM/WPS team. But there are more good riders on the market than good rides for 2017, so Brayton is forced to play the waiting game like so many others. In the meantime, he scored a sweet deal to ride a 2016 CRF450R for the Genuine Racing Honda team in the Australian Supercross Championship. Brayton won the season opener over the weekend so we called him when he got back to the U.S. to see how it’s all unfolding.

Racer X: So how did this deal even come about? I’m sure the first thing most people said was, “Wait, what? Brayton’s on a Honda?”
Justin Brayton: Yeah well the first thing that happened was a I got an email from the owner of the Honda team, Yarrive [Konsky] over there. The first thing I did was call the manager for Team Honda over here, Dan Betley, to see if he knew anything about the team, and to see if American Honda would like to support it at all. Long story short, the guys at Honda here were happy to support me. They’re obviously pretty busy right now and the last thing I wanted to do was step on any toes or get in the way of anything they had going on. I didn’t want to feel like I was bugging them. They gave me what’s pretty close to a factory bike over here, and then I was able to ship the parts down there. It really came together pretty quick and easy. Then I decided that my family and I could stay over there for six weeks. I’m able to get a factory Honda to race—and anytime you can get on one of those it’s pretty much a dream—and I can also take my family over there for a mini-vacation. I went over to Australia and raced the first three rounds in 2010 and I had a blast, so I’ve always wanted to go back. Plus, right now I don’t have anything lined up for 2017, so I felt like it would be better to do something rather than nothing.

Plenty of guys get good rides down there for that series. But I don’t think a lot of guys get this sort of deal, where they actually get some factory help in the U.S. to prepare. That’s pretty cool.
That was my thinking. If I could put the whole thing together with help from American Honda, it was a no brainer. But if they weren’t able to do it, I wouldn’t have done it. Luckily they were able to. I’m still good friends with a lot of the guys over there, Rich [Simmons], Cole Seely’s mechanic, is one of my best friends, and I’m still great friends with Cole, Gothic Jay [Jay Haines, crew chief] and Dan [Betley, team manager] so I’m just thankful they were able to help me. I got a bike about a week and a half ago and I was able to ride it about four times, then I rode it a day once I got over there. That’s still not a lot of time, so it was kind of weird at the race because usually when you’re racing you feel like you know your bike really, really well. But that shows how good the bike is. Just a handful of days on it and I was able to get the win. I’m glad to pay them back with the win, it would have been a bummer for them to put in all that extra work just for me to get a bad result.

Seeing you on a Honda, the obvious question is: does this mean anything for next year? Is this just for Australia or do you have a ’17 deal yet?
Well, initially it was 100 percent just for Australia, but as time moves on and the more I get used to the bike, the more I would like to stay on it for next year. Right now there’s nothing set in stone, but there have been some talks to possibly stay on a red bike. But the main thing is to go over to Australia, try to win more races, enjoy my time over there, and when I come back in mid-to-late November hopefully I’ll have something wrapped up. Hopefully it will be on a red bike. But if not, I’ll still have a great relationship with the guys at Honda. At least I’m making the most of my time right now and enjoying the moment racing over there with my family. Something I’ve really been working on is enjoying the now. I feel like every year at this time we’re thinking about next year. I’m just going to try to enjoy my time and make the most of it over there.

Have you ever actually been in this position? Not having a ride as the off-season begins?
No, it’s pretty new. Actually, it’s the first time I’ve ever had to deal with it. I’m thankful it’s happening more toward the end of my career; if I were 22-23 years old I’d be pretty stressed out right now! I feel like something is going to come together and it’s going to be good. I’ve passed up a couple of deals already because I feel like they weren’t the right fit for me, and I think something good is going to come along. I want to be happy and enjoy it whether I’m doing two or four or however many more years of racing. I feel like supercross is where I really excel, and I know I have some podiums left in me in supercross, so I really want to take advantage of that. I also want to do what I’m doing right now, which is create my own deal that is fun and lucrative for me and my family.

You’ve done a ton of these off-season races. Some guys want the time off but this seems to work for you.
The biggest thing for me is that this is what I excel at. When you’re doing something where you can do well, that’s when you have the most fun. For me, I don’t want to say that motocross is a struggle but it’s really difficult for me to do well, and when you run around in seventh or eighth place, it’s not much fun. Plus motocross makes you really fatigued, and if it’s not something you truly enjoy, being fatigued makes it that much worse. So every year the first time I hit a supercross track for the first time in awhile it’s super fun and I get really motivated. Everything is fun, I mean, I enjoy going to a lot of the motocross tracks, that’s not a problem, it’s just that when I go to the line at a supercross race, I still truly feel that I can be the fastest guy there on any given day. Until I don’t believe that, I’m going to keep getting after it.

You seem to think that you’re going to be fine. You don’t seem to worried.
I’m not super worried about it. If I don’t have anything I feel like it would be crazy. I was top five in a lot of races last year, I had a heat race win, I had a podium going in Detroit until I got a flat tire. So many times I just felt like I was right in the mix, and I think I finished a handful of points off of fifth in the series. I got eighth place in the series and I was battling with guys that have factory bikes and million-dollar salaries. So it would be crazy to not get anything, but I realize there are a lot of guys looking for rides. Thankfully, again, I’m not 22 years old where I have to go racing. I love it and I still want to do it, but I don’t think racing is my only identity anymore, whereas eight years ago it was my only identity. Now I’ve got a better outlook on life. Not saying I don’t enjoy it. I love racing, it’s what I love to do and what I want to do most. But it’s not my whole life.

How’d the race in Australia go?
It was awesome. The track was good. It was pretty legit, I think they said it was a St. Louis replica from last year or a few years ago. They had a Dash for Cash and Wil Hahn and I were in the final together. We were joking on the line that it felt like we were in the Des Moines Arenacross again, because we used to race each other in amateur arenacross. Then in the main event, I started in fourth or fifth, got into the lead around lap three, and [Dean] Ferris kept me pretty honest most of the way. I’ve got to work on a few things, my fitness wasn’t that great so I’ve got to work on that. We’ve got a few weeks to get ready for the next one. I’m home now but when I go back for six weeks I’ll bring the family with me.

You’ll also be in this big AUS-X Open, right? I know you’re pretty good friends with Cooper Webb and Chad Reed and those guys so that will be fun.
Yeah that’s going to be awesome. That will be the last round. I’ve never been to Sydney so I’m looking forward to seeing that race. I watched some video of the track from last year and it looks a little like an arenacross, so I’m looking forward to getting out there and racing those guys.