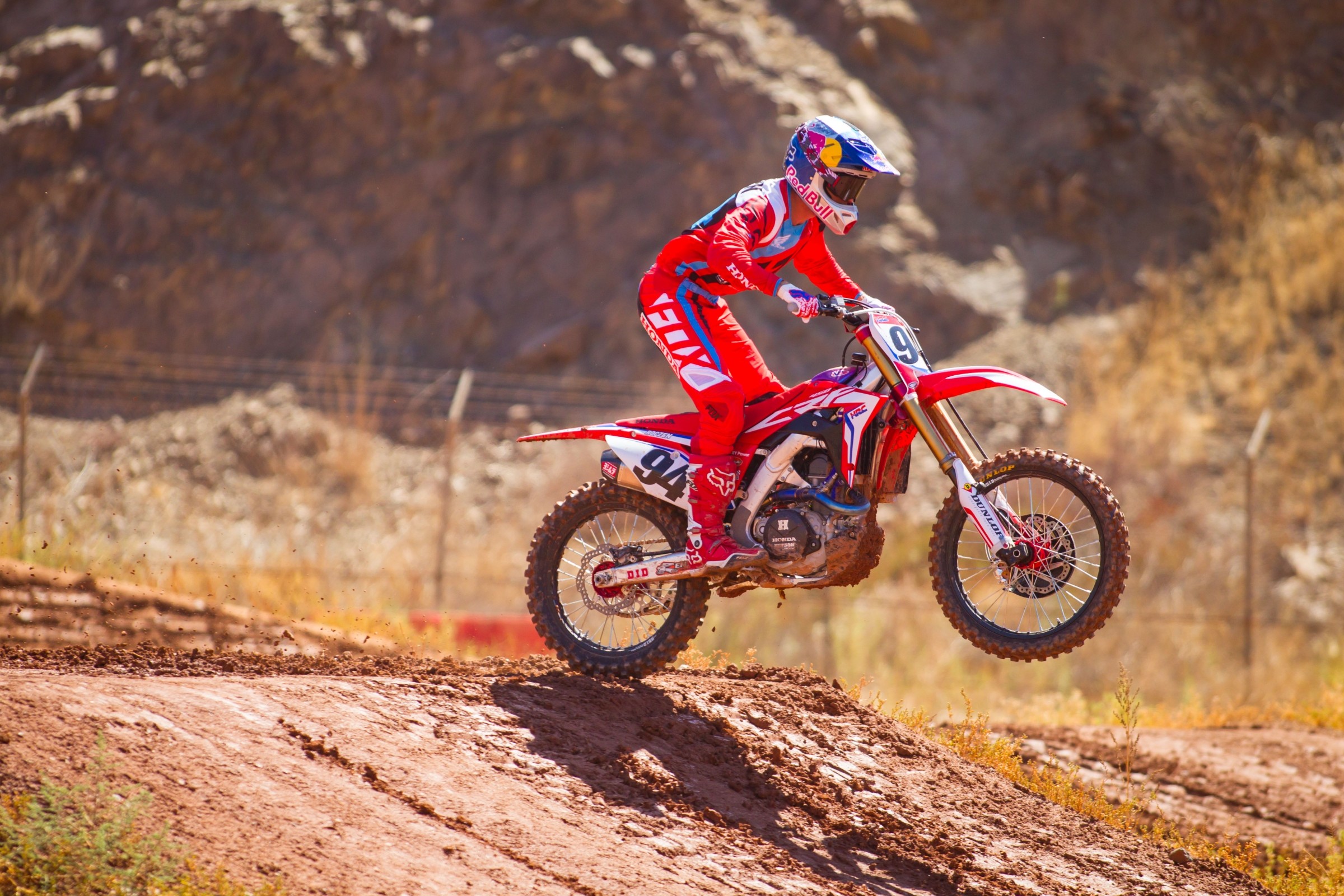 Well, it’s finally public info. Ken Roczen’s move to Honda HRC has long been talked about, but yesterday’s leaked photos moved the timetable ahead by about 10 days. The leaked info may turn out to be a godsend for both Kenny and Honda. First, there was much more fuss made about this than there would have been on October 1. Seeing photos that aren’t supposed to be seen always draws a crowd. The buzz created by the leak was much juicier than a normal press release could have ever been. I haven’t seen so much hoopla around an OEM switch since Ricky Carmichael’s (ironic that the tables are turned) move to Suzuki on April Fools’ Day of 2004. Secondly, this timing added 10 days to Kenny’s testing timeline before the Monster Energy Cup. He won’t have to hide at secret tracks to get riding in, he can just head on over to the Honda test track and do his thing two weeks before he would have otherwise been able to. So, as far as the news breaking early, I think it will be a blessing in disguise after all of the involved parties’ blood pressure returns to normal.

As for how Kenny will fare on the new team and bike, that’s tough to know. Surely he will be good, that’s an easy assumption. Just how good is the real meat of the question, though. The level he was at just one month ago is rare air. He had figured out the recipe to beat anyone worldwide, and somewhat easily at that. Can he jump on a completely different program with an all new motorcycle and simply continue to dominate? Historically, that’s been a big ask.

Kenny’s move to Suzuki in 2015 started really well, remember he was your Anaheim 1 winner. He had his struggles afterwards, though, with big crashes at Oakland and Atlanta, derailing any chance at a championship. He will have to avoid any of those pitfalls to beat a rejuvenated Ryan Dungey and a more confident Eli Tomac, who is entering the second year of his Kawasaki contract. For what it’s worth, I think Kenny will come out swinging. He is supremely confident right now, and with Dungey returning from injury and Eli still looking for that championship level consistency in supercross, the stage is set for him to win his first SX title.

He will have a mountain of work ahead, however. This new Honda is untested and unproven, meaning the Honda technicians will be guessing at times when making setting changes. Their data won’t be as extensive as they would like, so if Kenny comes in with an issue, they won’t have a guaranteed fix from the previous years of trial and error. Not having enough testing data is a theme I believe Eli Tomac struggled with on the 2016 KX450F as well. New bikes are always a learning curve, even when they are a step forward. That will be the main focus and key component for 2017 success. There will be a lot of “new” in Kenny’s world for the next couple of months. Getting comfortable and maintaining that mental edge he had, while in the midst of so much change, is the biggest question.

I look at this deal more as to what it means to Honda than to Roczen. We’ve already watched Roczen leave a team after having success. But Honda jumping into the free-agent fray at this level really means something. The last time the brand did this, it signed Ricky Carmichael away from Kawasaki at the end of 2001. Even the Kawasaki folks are clear that they had the money to match Honda’s big offer back then. RC wanted to switch to red, not because of green (money), but because people around him told him Honda was the next level. And you know what? His bike setup looked super weird on the Honda, but Ricky was even more dominant with it than he was with Kawasaki (two perfect seasons outdoors). Plus, Honda had a 450 ready for him years before Kawi would have. So it really was the right move…but man did the public not see it that way! RC and Honda were getting booed non-stop, especially since he beat fan favorites like Jeremy McGrath and Travis Pastrana. It was a success from a results standpoint but a disaster PR-wise. I think that made Honda gun shy for a long time.

This was nearly 15 years ago, though, so I think most of the Honda folks that were stung by it are all gone. Why not get back in with Roczen? Based on his age, potential and marketability, I say he’s the most coveted rider in the world. I think he and the team are much better at the PR game than everyone was in the RC days, also.

There’s some risk. Kenny is a carefree guy and we’ll have to see if an Instragram post gets him in any trouble with the Honda bosses. My guess is both sides know what they’re getting into and are prepared for that. As for the bike, if Kenny grumbles about setup you’re going to hear a lot of fans saying, “But you’re the one who switched!” But Kenny notoriously doesn’t care about that, and if he worked his way from the dark to the light with RCH, he can surely get it done again at Honda. Overall, the rewards far, far outweigh the risks. This is big news for Honda, and it could be scary for every other team.

This is a big deal. A few years ago Honda was not happy about losing—the big red machine had been shut out of titles since Carmichael left at the end of 2004. Sweeping changes at Honda lately have included firing up the HRC machine in Japan, and dedicating resources to Europe and the USA that hadn’t been seen in a while. They overhauled the staffing at the chassis and other departments, they hired Jean-Michel Bayle to help their European riders and they started doing some cool things on their bikes again. I mean, they came up with an all-new motor for the European Honda team that never saw the light of production! THAT’S what Honda has always been known for.

I think Honda’s rededication has reached its peak with the signing of Roczen. They went after him right away. This was the guy they wanted from the start to get on top again, and with the all-new championship rider comes the all-new 2017 CRF450R. I don’t think this is a coincidence and it’s ironic that the all-new bike might actually make the learning curve easier for the #94. It’s that different and we’ve seen some (key word: some) teams struggle to get a new motorcycle working great for its riders. We’ll see if that’s the case here but even in the worst case, Roczen is good enough to get the bike on top many weekends just on his talent alone. Oh, and have we ever seen a rider as good as Roczen ride three different bikes in just six years?

Roczen’s on top right now by virtue of his dominant 450 motocross season but let’s not forget about that dude in Minnesota that actually owns the 450 supercross number one plate. I feel like we’re all putting Roczen on top of the mountain here as the number one guy in the sport, but to me I’d put Dungey and Roczen as 1A and 1B right now. This signing is great for Roczen, it’s great for Honda and it’s great for the sport. When is Anaheim 1 again?