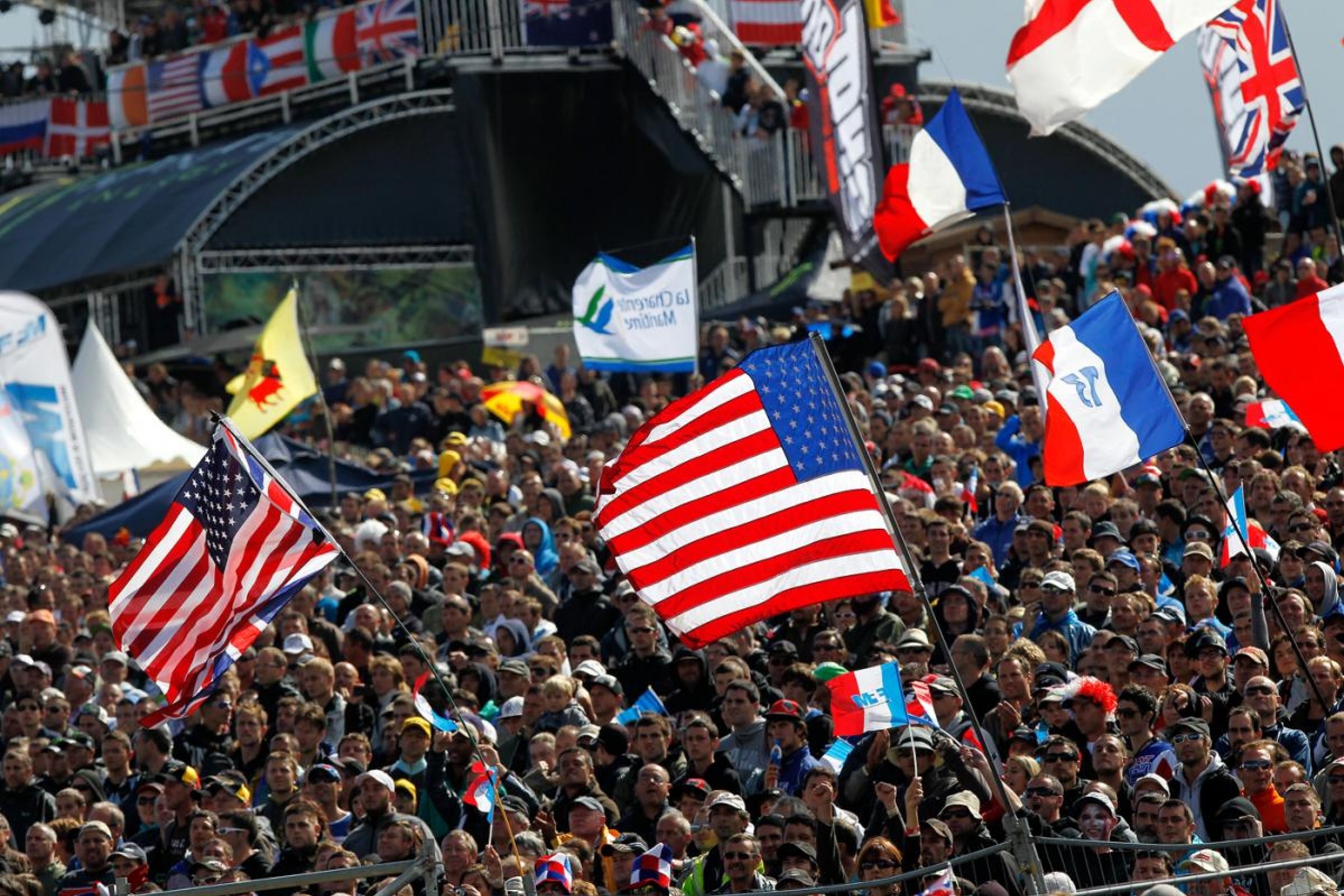 We’ve officially entered the “off-season.” With the FIM World Motocross Championship wrapping up at Glen Helen on Sunday, nearly every major SX/MX title has been decided, but that doesn’t mean racing is over. We still have the Motocross of Nations, Red Bull Straight Rhythm, the Monster Energy Cup and more.

Below is your guide for most every major event from now until Anaheim!

When: Sept. 17 through Nov. 13
Where: Australia
Tickets
Facebook Page

The six-round championship starts this weekend in Jimboomba, and ends in Sydney on November 13. A strong American contingent has been confirmed for the series, led by Justin Brayton and Wil Hahn. Brayton will ride a Honda for the first time since 2012, as he joins the Honda Genuine Racing team. Fan-favorite Adam Enticknap will be Brayton’s teammate in SX1. Hahn will continue his relationship with Kawasaki down under—he’s signed with the National Pump/Monster Energy Kawasaki team.

Jimmy Decotis returns to Australia to defend his SX2 championship. Decotis is also riding for the Honda Genuine Racing team. The Penrite Honda team, which will run alongside the Genunie Racing team, will bring back two-time Australian Supercross champion and defending Amsoil Arenacross champion Gavin Faith in SX2.

Kyle Peters will also compete in the championship, riding the SX1 class for the KTM Motocross Racing Team.

When: Sept. 24-25
Where: Maggiora, Italy
Where to watch: MXGP-TV.com and CBS Sports Network
Website: mxgp.com
Tickets

The granddaddy of the entire off-season. The MXoN returns to Maggiora, site of incredible Team USA win in 1986 with David Bailey, Rick Johnson and Johnny O’Mara. All three of them will be there to be part of the ceremony! Behind captain Cooper Webb, and featuring Alex Martin and Jason Anderson, Team USA looks to stop a four-year slide. Two-time and defending champions Team France, as well as Team Belgium, Team Holland and others will be tough. You can view the entire pre-entry list here.

It’s not a race but, well, it kind of is. Most factory contracts end September 30, so any new rider/team combos usually can’t be announced officially until October 1. So this is the date where you will get a lot more official info about who is going where. Expect to hear about Ken Roczen on a Honda, and Trey Canard and Blake Baggett on KTMs, among other big moves, right around this time.

This silly season will be sillier than usual, though. There are a ton of free agents without even unofficial homes, like James and Malcolm Stewart, Dean Wilson, Justin Brayton, Broc Tickle and more. They still might not have deals as of October 1, so the silly season watch should extend much longer than usual.

When: Oct. 8
Where: Gelsenkirchen, Germany
Where to watch: MXGP-TV.com
Website: mxgp.com
Tickets

Youthstream will debut their new event two weeks after the Motocross of Nations at Veltins Arena in Germany. The event will pit each manufacturer—KTM, Honda, Husqvarna, Yamaha, Kawasaki, Suzuki and TM—against each other in a three-race format, with the lowest score winning. Three riders (with one “Joker” who can replace any rider on the team at any time) will compete for each manufacturer. Basically, same points format as the Motocross of Nations, but with teams based on brands instead of countries. And the whole thing takes place indoors, unlike the ‘Nations.

More details on the event can be found here.

The Monster Energy Cup serves as the unofficial start to the 2017 season. Thanks to that post-October 1 date, most riders will debut their new bikes, gears, boots, etc., at the one-off event in Las Vegas. No official entry list has been announced, but expect pretty much every top-tier rider to show.

When: Oct. 22
Where: Pomona, CA
How to watch: Redbull.tv
Website: redbull.com
Tickets

The unique event put on by Red Bull returns for a third straight year, this time under the lights. Featuring head-to-head racing on ½ mile track that has zero turns, the event is nice break from the typical racing. While an official entry list hasn’t been released yet, the event typically draws the top-tier riders. Last year’s event featured James Stewart, Ryan Dungey, Justin Brayton, Dean Wilson and Malcolm Stewart, among others.

The event is actually part of the Australian Supercross Championship, but will pull in some big-name stars for a second straight year. Ryan Villopoto, Chad Reed and Cooper Webb have already been confirmed for the event in November. Last year Webb won an epic battle over Reed.

You know it as the Paris, or Bercy, supercross, but a few years ago this event was moved to a larger stadium in Lille, further outside of the city. It’s still the original, biggest and best of the off-season Euro SX circus. This year’s event headlined by Justin Barcia and Marvin Musquin, and we hear Malcolm Stewart will likely be on the gate, too.

When: November and December

After Bercy-Lille comes several other off-season SX races in Europe, such as in Genoa, Italy and Geneva, Switzerland. These usually pack a few known American names, but we don’t have any details yet. Stay tuned.

When: Sept. 24 through Oct. 30
Where: Masontown, WV; St. Clairsville, OH; Crawfordsville, IN
Where to Watch: RacerTV.com
Website: gnccracing.com
Tickets

The Amsoil GNCC circuit returned from summer break last weekend at Unadilla, with Kailub Russell picking up right where he left off. His win on Sunday was his seventh of the year and saw him stretch his points lead over Josh Strang to 20. Three rounds remain in the series, which will air live on RacerTV.com. Want to get in on the action? You can race amateur classes at all events. Or for even more fun, just go to the final round in Indiana (same site as the final round of Lucas Oil Pro Motocross) and take the school bus ride over to Ironman Hill. You’ll see action like you’ve never seen outside of a Blackwater 100 video on YouTube.

Five rounds remain in the eight round championship. Rockstar Energy Husqvarna’s Colton Haaker won the opening two rounds and holds a slim one-point lead over Round 3 winner Cody Webb. The ageless Mike Brown is currently third in the championship, fifteen behind Haaker. This series should come down to the wire, as Haaker and Webb are pretty evenly matched.

When: Oct. 8 through Nov. 5
Where: Canada
Website: arenacrosstour.ca
Tickets

The five-round Canadian National Arenacross Tour returns for a second year. The season kicks off October 8 in Ontario and ends on November 5 in Calgary. An official entry list has yet to be announced, but we hear that Americans Matt Goerke, Heath Harrison, Jacob Williamson, Steven Mages, Ross Johnson, Cade Clason are expected to compete. Chris Blose and Jacob Hayes also may race the series. They’ll join Canadians Cole Thompson, Kaven Benoit, Tyler Medaglia, Dylan Wright, Jess Pettis and more. Colton Facciotti may do the two East Coast rounds. Overall, this is becoming a series to keep an eye on.