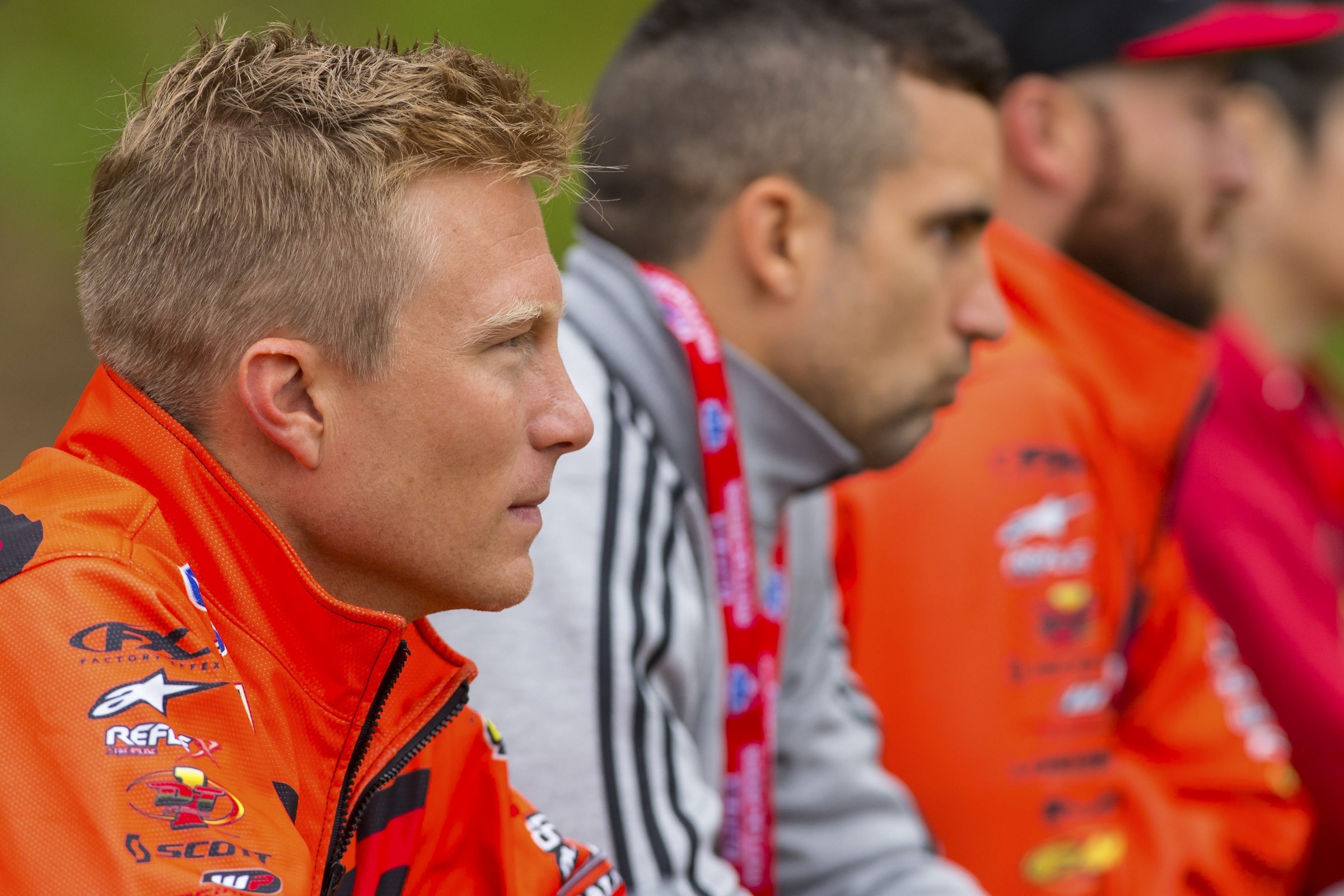 Perhaps you heard: After sixteen professional seasons, Andrew Short is retiring. The BTOSports-WPS-KTM rider wrapped up a career this past weekend at Round 12 of the Lucas Oil Pro Motocross Championship at Ironman and he went out in style with a holeshot in the second 450MX moto!

Sure, we in the media have our own dealings with Andrew and they’ve always been professional, interesting and friendly. But what about the people who worked with Andrew over the years? What did they have to say about the #29?

Well, you’re in luck—we asked them! This past weekend I canvased the pits to talk to the people that Andrew Short interacted with over the years to find out their thoughts on hiring Andrew, working with Andrew or whatever they wanted to mention.

True professional. That’s it. If you’re going to put it in two words, that’s it, true professional, that’s how he is. We’ve had four full years of working together and everything he achieved before us, and then the stuff he achieved with us. I’d like to think that we helped rejuvenate his career. I feel like if you look back at what Andrew did, Andrew just led the pathway along with maybe Chad Reed of showing riders that you can race competitively well into your thirties. He’s a staple of a gentleman and a professional. It’s taken this thing to another level. It’s kind of funny—I think he’s going out on his own terms. He’s totally turned this outdoor season around, knocking on the top five. No reason he can’t come back next year and do the same thing. I’m happy to see him going out the way he is because at the end of the day it’s his terms and not many guys get to say that.

In the history of our team itself, if there were one standpoint I would say hiring Andrew probably took the biggest step, for sure. I would say Andrew is a rider that taught me just as much as I maybe helped him.

I was a little hesitant at first to work for him; I really didn’t want to take the job. I was scared. I’d heard a lot of “Andrew’s picky, Andrew’s this, that.” But I took the job and it’s grown to be like a family. I know exactly what he wants. I’m with him during the week. I’m with him during the weekend. So I know exactly what he wants. It’s kind of being able to read him now. It’s definitely become a lot easier lately, but it’s been really fun. He treats me like a human being. Some times we have a problem and I want to blame the bike but he’s like, “Oh, I just need to go faster,” or “I need to acclimate to that.” He’s that guy. He won’t blame the bike.

He’s also the guy that you have to tell to do less. He’ll run himself into the ground. He’ll do too much. He tries to play Rocky and it doesn’t work for him, especially since he’s getting older. It seems like a lot more people need to do that lately. I’ve never seen him turn one person away for a signature or a photo. He’s the best person at that kind of deal.

He was an awesome guy. I still consider him a good friend. Budds Creek first moto, we won there. That’s a good memory. He wasn’t very picky on the motorcycle but man, he could break a lot of things. As nice of a guy as he is, he was not very nice to his dirt bike.

He handled everything pretty well. We won the Grand National Championship in 2008. His family is awesome. The kids are awesome. He’s got a bitchin pad in Texas that I’ve been to quite a few times too!

He’s without a doubt the easiest guy I’ve ever had to work with. And it’s been nine years for us as his sponsor. He’s about as easy as they get.

He was always very, very professional. Even on bad days he’s always level-headed, always keeps his poop in a group, I guess you would say. He doesn’t let much bother him. Racing is what it is and he does his best and that’s all he cares about. I don’t think he gets mad!

And you want to talk about meeting fans or dealers or whatever—he’ll do anything. He doesn’t care. If you ask him to do something, he’s there. He’s by far the easiest guy.

When he was here, everything that we asked of him he did and he performed. I’m sure he would have liked to have had more wins under the tent but he did a great job for us. It’d be great to have him back, actually, as a test rider or something.

He was very easy for all of us to work with. He’s a good guy all around. He’s a good racer. He really helped us move KTM forward in the early days when we first got here. He’s a great person and his work on the new 450 at the time—he did a lot of the groundwork for that, so it was great. You don’t get better than that guy. That’s the salt of the earth, right there.

Working with Shorty was always a pleasure. Such a super positive guy, and never complained. Loved riding the bike, and always appreciated everyone's help.