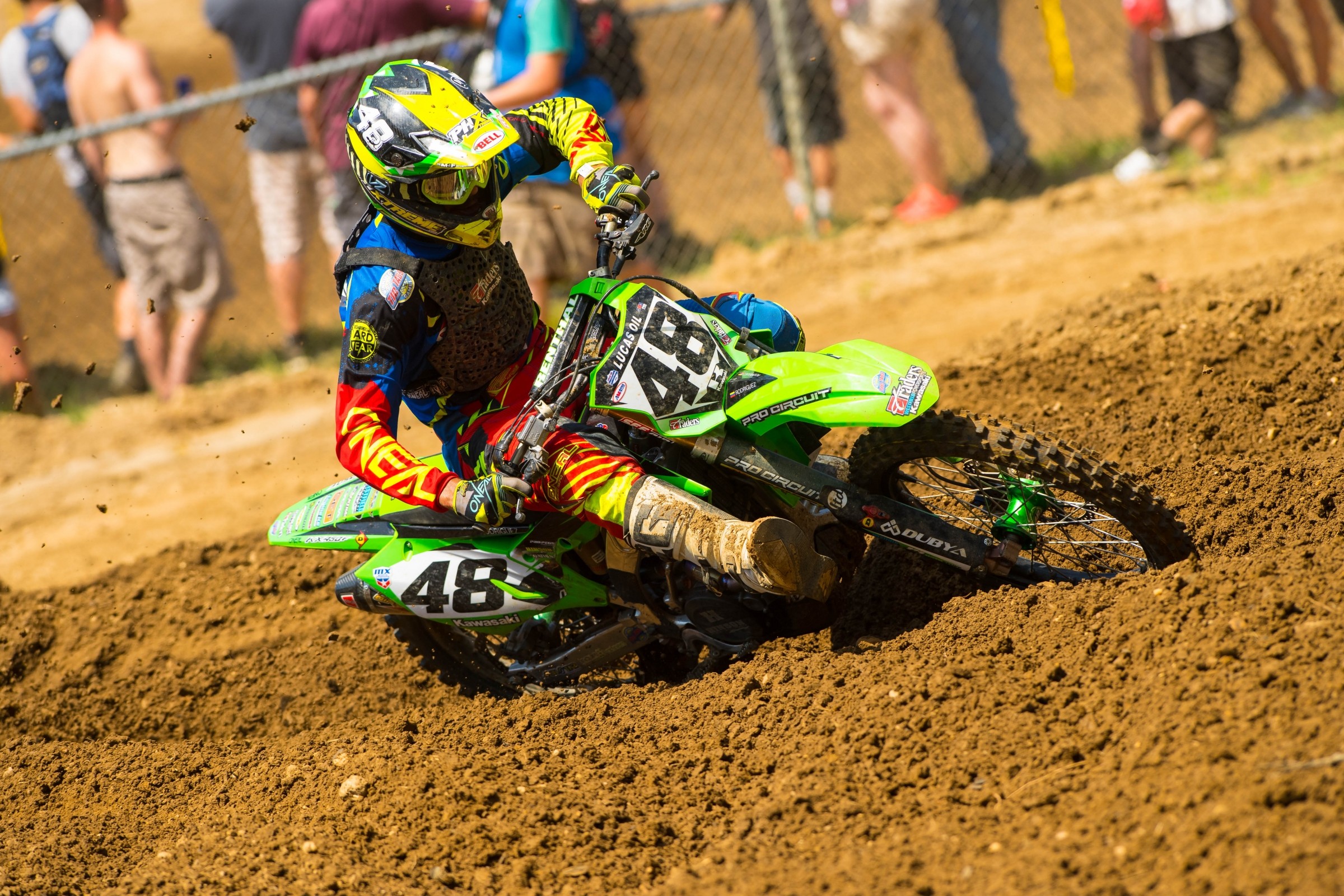 Traders Racing Kawasaki. Based on the name, you might think this privateer team is backed by a Kawasaki dealership named Traders. Nope, Traders is actually a restaurant in Maryland, owned by a motocross enthusiast. Budds Creek is the team’s home race, which made it the right time for Anthony Rodriguez to log his best race of the season, a tenth overall in the 450 Class.

A-Rod has been rebuilding himself after two injury-riddled seasons with Yamalube/Star Racing Yamaha. How far can he and his team go?

Racer X: The 450, talk about how that all came about.
Anthony Rodriguez: Me and the team, it was something that came up, and they thought my riding style would fit better with the 450, and I knew it did. In the past when I was amateur I knew for some reason my 450 riding was always a bit better than the 250. The team’s always been doing the best that they can, but it’s always difficult to have a comparable bike to a complete factory team. We possibly have the best bike you can buy out there, but it’s still not that close to a factory bike, especially the 250s. When we come to the 450s that doesn’t affect near as much, you can compete without a factory bike. So that was one of the reasons. We just wanted to come out here and try to show people that I could also ride a 450, I guess.

This is a bit of a home race for the team too, so you picked a good one to ride that well.
Yeah, totally. I’ve only been on the 450 I want to say three and a half weeks probably, so it was two weeks before last weekend’s race. Unadilla was my first time out there ever and I had never been at that track. So this one I have been here before, so I came in a little more prepared just knowing how the track was. On top of that, all the people from Traders were screaming out on the track. That was helping too. And the amazing crab legs that I had yesterday. I’m feeling good today!

Did they have food here?
Yeah, in the afternoon yesterday they fed us. They have amazing food. Give it up to them.

You need to go to the place and celebrate.
Second moto two laps to go I was like, I already decided what food I would like to eat now!

Are you going?
Oh they’re here at the track! They cook here for a bunch of people. The restaurant is far from here but they have everyone here cooking great food for us.

So yesterday’s crab legs were good training food?
Yeah, especially for your soul. It makes you happy.

I know it’s kind of a rebuilding year but you’ve been solid. I know your goal all along was to prove last year you had injuries that weren’t even your fault. You’re still standing; you’re still walking late in the year. You’re good.
Yeah, definitely. A lot of people were waiting for that A-Rod who could flash one race and show everybody that he could be a top five, if not top three guy. But I’m working on that. First thing is, I wanted to do the whole season, which I have done. I have not missed any races but for mechanical reasons or the crash in Glen Helen—I think everyone saw that one. But besides that, I raced every single race that I’ve had and it’s been really good especially for me mentally. So for next year I’m already looking forward to training so that I can compare the two and just be consistent and faster than I am right now. It’s not that I’m holding back; I’m going as fast as I can, but I’m just keeping things together.

Tell me about how the two motos went. You were in some battles out there.
Yeah, the first moto was good. I was starting right behind [Dean] Wilson. We both made passes around a lot of people. He was sixth, I was seventh. I was trying to hold on with that pace, but I got a little tired. I’m not going to lie. Maybe needed to spend a little more time on the suspension on the 450, or maybe the track was just that rough. But I ended up getting passed by Freddy Noren and then I was trying to stay with him, maybe even pass him back, but my rear brake went away. I had no rear brake whatsoever, so I got passed by two more riders and then I ended up tenth. I was pretty happy with that. Second moto I had Marvin Musquin next to me on the start. He flinched before the gate dropped so I flinched with him. So we both didn’t have the best of the starts, although he came out better than me. So I made my way back up to eleventh. That’s where I finished, but I had to pass some people. Honestly there was a little more to give, but I was just really tired in that second moto. Not going to lie to you. The last five laps I was really tired.

The only difference is you’re admitting it. Everybody had to be worked. It was hot. It was rough.
I have nothing to hide, especially just being on the 450 for this amount of time. I’ve barely had any time to get ready with it. It’s a much bigger bike that you need to muscle around. Yes, it’s easier for me to ride it but still requires more muscle.

How have these guys been to work with this year?
This team has been amazing. More than team, they’re friendly. It’s like a group. It’s almost like family, so that’s good. Always motivating, pushing the way they need to push, and always trying to help. So I couldn’t be any happier.

You probably needed that. There had to be some times where you were worried, like what am I going to do? These guys picked you up.
Yeah, definitely. Before supercross I had no bike, I had nothing. I had to work for my visa paperwork and stuff. So I didn’t even ride for a little bit. I had to go to Venezuela and renew my passport, et cetera. If you’re from South America you know what a hassle it is. I didn’t have a bike. I ended up buying a Yamaha myself. I put some supercross suspension on it that anybody could get and I was riding for two weeks maybe, and then I got a call from these guys. I tried the bike and we signed the contract. Literally I had three to four weeks to get ready for supercross. It was a quick, last second thing.

And you rode East [Region], so we’re talking January, Anaheim’s rolling around and at that time you had nothing?
Yeah, that’s how it was.

So this is good?
Yeah, it was really good. I knew I could probably do supercross as a privateer, but it’s hard mentally and everything makes it harder. But there was no way I was going to be able to do it money-wise for outdoors. It is just way more money. Thankfully these guys picked me up and they made it happen for me.