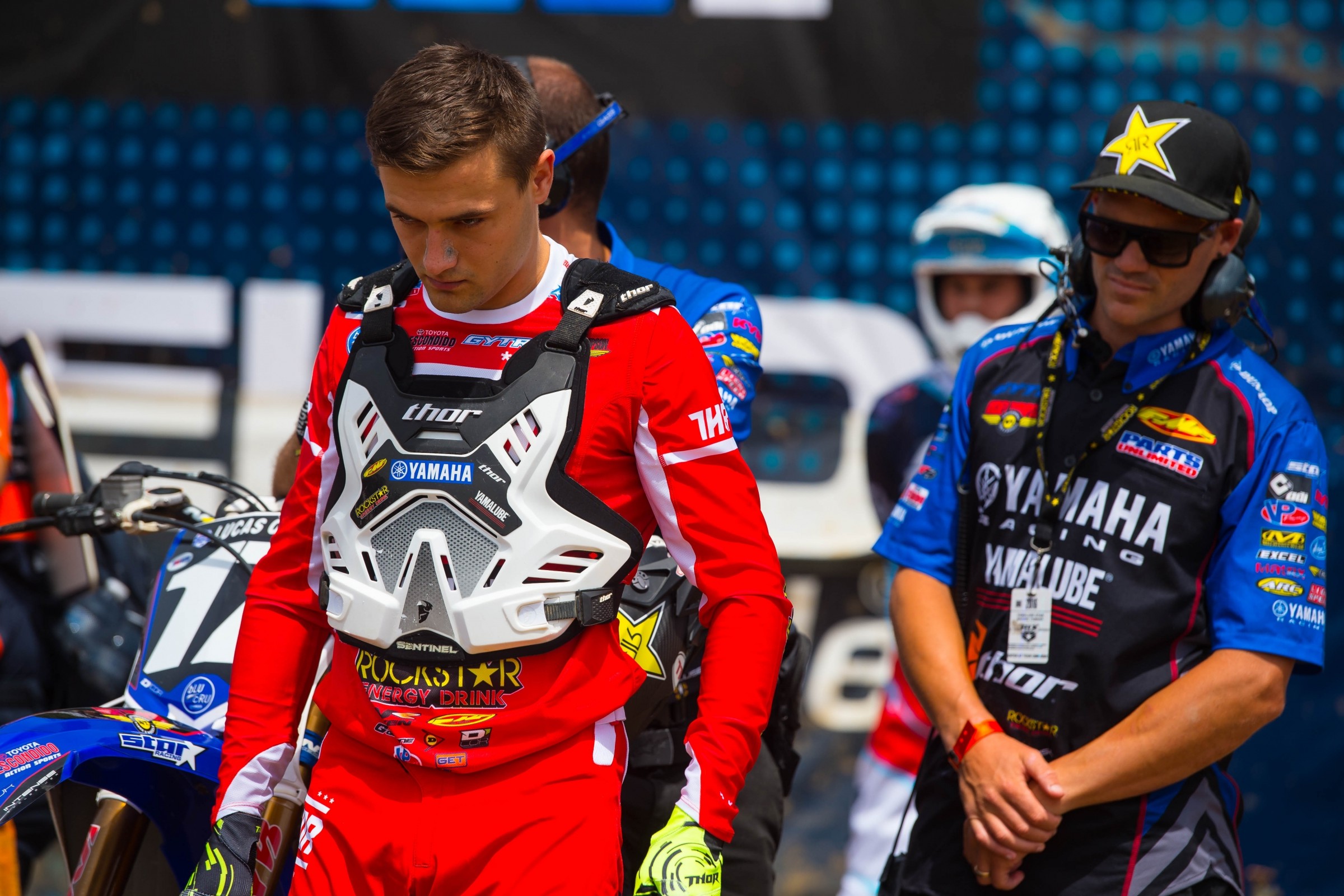 Welcome to the Motorcycle Superstore Race Day Feed where we will be updating you with moto by moto recaps, results and more from Round 10 of Lucas Oil Pro Motocross at Unadilla.

Another dominating performance from Ken Roczen in Upstate New York, as the 450 points leader led all fifteen laps in the second moto en route to a more than fifty second win over Marvin Musquin.

The story of the moto, though, was 450 rookie Benny Bloss. Unsure if he and the team would even be able to race today after the team rig caught fire last night, Bloss ran second for a majority of the moto and finished a career-high fourth after getting passed by Musquin and Eli Tomac late in the race.

Musquin, whose had tremendous success at this venue, overcame an early crash while running second and fought his way all the way back to get into the top two. The Red Bull KTM rider would finish second overall behind 3-2 moto scores.

A bizarre ending to the second 250 moto at Unadilla saw Cooper Webb claim his second moto win and the overall on the day.

Rookie Austin Forkner was in control for much of the race, leading nine of the ten completed laps. Webb cut Forkner’s three-second gap late in the race and finally made the pass around the six minute mark. It was fortunate for Webb he made the pass when he did, because shortly after the race was red flagged after Jessy Nelson went down hard. According to the rules, if the race is stopped after 20 minutes, it is considered complete. So, although they completed just ten laps, Webb was awarded the moto win. We’ll have an update on Nelson as soon as more information becomes available.

Quick Notes:
- Joey Savatgy pulled out of the race early. We’ll have an update on him in our Saturday Night Live feature later tonight.

- Zach Osborne suffered a mechanical and had to withdraw from the race early.

Ken Roczen put in a flawless performance to capture the first 450 moto win at the Unadilla National. As we’ve seen time and time again this year, Roczen made quick, decisive moves to take the early lead and went unchallenged en route to a 13.3 second win.

Eli Tomac, who looked so dominating in the second moto at Washougal, wasn’t able to find the pace in the first moto. Tomac had the jump on Roczen out of the gate, but lost ground early and never recovered.

Justin Barcia took the holeshot, but like Tomac, lost ground to Roczen early. After losing second to Tomac, Barcia dropped one more spot to Marvin Musquin and finished the moto fourth. Barcia’s teammate Weston Peick would round out the top five.

- Andrew Short suffered a mechanical in the moto and finished thirty-eighth.

- Jerry Robin made his pro debut and finished thirty-fourth.

- Traders Racing Kawasaki’s Anthony Rodriguez has moved from the 250 Class to the 450 Class. He finished fourteenth in the first moto.

- In his first race of 2016 with Honda HRC, Fredrik Noren finished sixth.

Austin Forkner found himself in a familiar position in the first 250 moto at Unadilla. In his first race since taking his first career professional win in the second moto at Washougal, the Monster Energy/Pro Circuit Kawasaki rookie was the early leader at Unadilla. But three laps into the moto, privateer Coty Schock went down hard, causing the race to be red flagged. The Delaware native was shown giving a thumbs up as he was carted off the track. We’ll provide an update once more information is known.

Adam Cianciarulo took advantage of the restart, getting out to the early lead over teammates Joey Savatgy, Arnaud Tonus and points leader Cooper Webb. The restart certainly didn’t benefit Forkner, as an early crash left him buried in the field. He would fight back to finish seventh.

Around the fifteen-minute mark in the moto, Webb began to make his move toward for the lead. As Webb applied the pressure, AC took a look over his shoulder and took an outside line, allowing Webb to slide through. Webb would never relinquish the lead and won the first moto by eight-plus seconds.

Savatgy eventually moved past Tonus for third and then AC, and appeared to have second secured. But late in the moto, Aaron Plessinger made a huge move to get into third—and briefly past Savatgy for second. Once Savatgy noticed he had a challenge for the position, he was able to regroup and held off Plessinger for second. After leading early, Cianciarulo would finish fourth.

Quick Notes:
- Strange start to the day for Alex Martin. The Yamalube/Star Racing Yamaha rider got a front flat tire during the first 250 moto. The team changed the tire during the restart, but Martin crashed early and was dead last. He came back to finish thirteenth.

- GEICO Honda rookie Tristan Charboneau had his best finish since returning from a shoulder injury at Spring Creek. He finished tenth in moto one.

Qualifying has wrapped up at the Unadilla National and no surprises up front in the 450 Class, as points leader Ken Roczen set the fastest time of the session. Roczen was nearly two seconds faster than second place Justin Barcia and just over three seconds faster than third place Marvin Musquin.

Eli Tomac, coming off an overall win at Washougal, was fourth fastest, more than three seconds off Roczen’s pace. Weston Peick rounded out the top five.

In the 250 Class, Washougal overall winner Alex Martin set the fastest time at the end of the session to just clip Arnaud Tonus. Martin’s 2:19.358 was tenths of second better than Tonus’ 2:19.681. In his second race back from a back injury, Justin Hill set the third fastest time.

Part of the inaugural championship back in 1972, Unadilla has been a staple of the Lucas Oil Pro Motocross schedule for more than forty years. The upstate New York facility has hosted a number of different events, from Pro Motocross to Inter-AM to Trans-AMA to USGPs and was the first host of the Motocross of Nations on U.S. soil back in 1987. The track has certainly changed over the years, as Jason Thomas pointed out in his Staging Area column, but it still features iconic obstacles such as the Gravity Cavity, The Wall and Screw-U.

Its more “Euro-style” layout has certainly benefited international riders over the years, and 450 points leader Ken Roczen is looking to become the eleventh different international winner (including 450, 250 and 500cc) at the track—the most on any venue on the circuit.

Following a two-week break, Roczen enters the tenth round of the championship with a commanding 55-point lead over Eli Tomac. While a longshot, Roczen could clinch his second 450MX title today if he goes 1-1 and Tomac scores five points or less. The more likely scenario will see Roczen put the championship on ice next weekend at Budds Creek.

Injuries are beginning to pile up in the 450 Class, as Justin Bogle, Tyler Bowers, Trey Canard, Christophe Pourcel, Ben LaMay and Jesse Wentland have been ruled out. They join the likes of Ryan Dungey, Broc Tickle, Jason Anderson, Cole Seely, Blake Baggett and more already on the sidelines. In good news, Yoshimura Suzuki will get Matt Bisceglia back after the 450 rookie missed the last two rounds due to a partially collapsed and fractured ribs sustained at Southwick. For a complete list of who’s in and who’s out, check out our Injury Report.

Like his 450 counterpart, 250 points leader Cooper Webb also has the ability to clinch his championship today. With two-time defending champion Jeremy Martin out for the season, Webb enters the weekend with a 53-point lead over third-place Joey Savatgy. If Webb were to go 1-1, he could clinch if Savatgy scores three points or less. Again, no realistic, but a possibility.

Horizon Award winner Chase Sexton will have to put his professional debut on hold as he deals with a avulsion fracture in his left knee. Avulsion fractures occur when the end of a ligament pulls away the piece of bone it is attached to. Such injuries are rare, but are more common in young athletes who are both growing and putting their bodies through rigorous training regimens. At this time we're unsure of the 16-year-old GEICO Honda rookies status for Budds Creek.

CycleTrader.com/Rock River Yamaha's Bradley Taft and Blue Buffalo/Slater Skins Yamaha's Jerry Robin (450 Class) will make their pro debuts today. Below is a chart we featured in 10 Things to Watch earlier this week of recent pro debuts after Loretta's.

Looking back at some recent debuts after Loretta's.