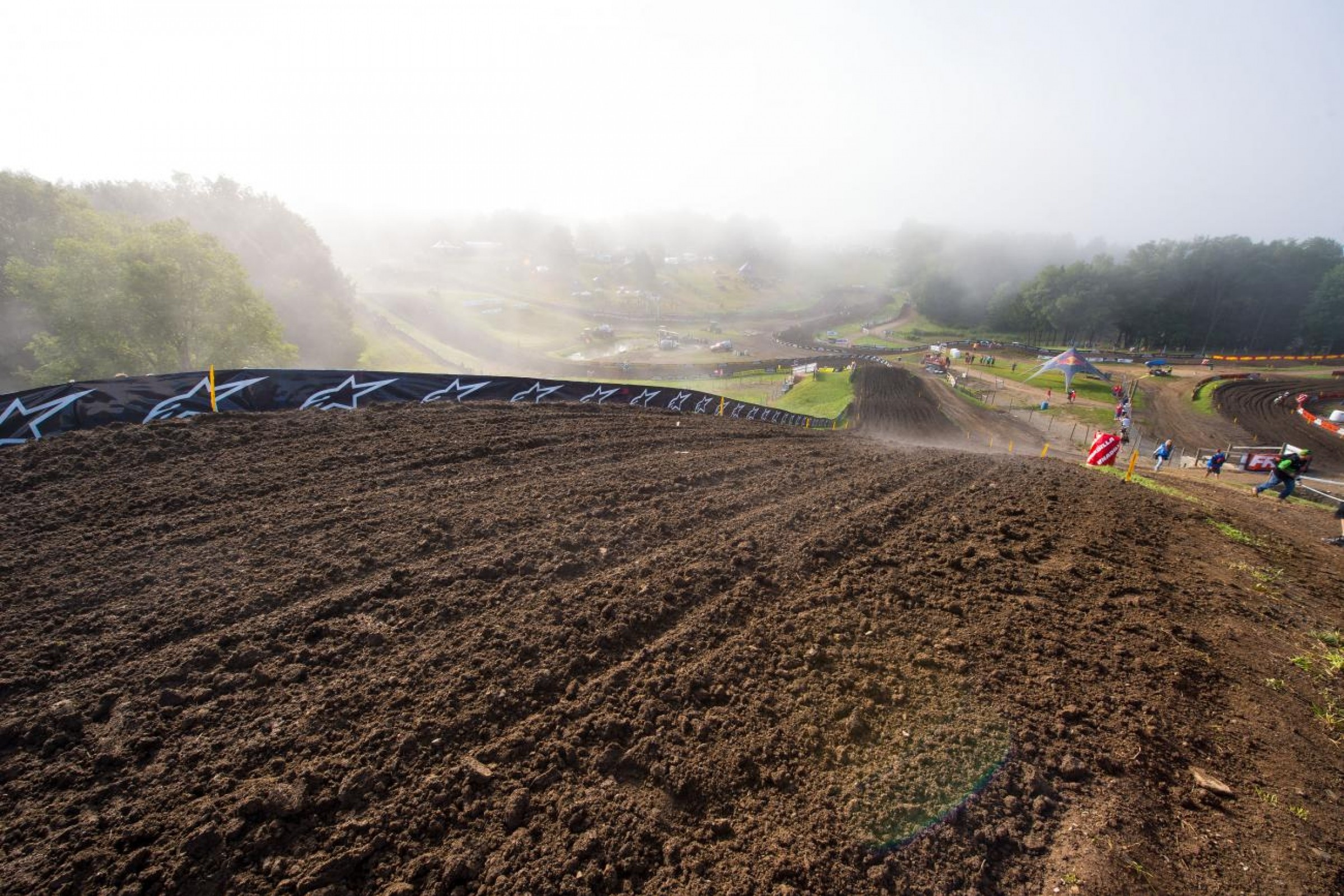 Unadilla is an interesting race. One of, if not the most storied race on the circuit, it is also the most polarizing event. The older generation worships the upstate New York facility. Its history is rich with legendary races and memories. Even looking back through old pictures and low quality race videos, I can see why it was regarded so highly. The famed topsoil was abundant, providing great traction and also creating large rolling bumps that stretched across the countryside. Simply whispering the word “Unadilla” to a rider from that era evoked memories of moto perfection, a track that rose above the others.

Over time, however, that topsoil was carried out of the facility on the bikes themselves. Every time a bit of mud dried on a rear fender after a day of racing, the Unadilla track lost more of what made it so great. The culmination of those years of dirt removal left Unadilla down to the bedrock. The surface was no longer a lush landscape of motocross heaven, instead, it had been stripped down to a rocky, hard-packed track that riders had grown to hate. Having been battered by the rocks that Unadilla’s barren surface presented, I dreaded heading back year after year. Damon Bradshaw and Ricky Carmichael were even more outspoken in their time, not shying away from what Unadilla had been reduced to. No one benefits from harsh words but many riders were at a breaking point with the conditions and the danger that the rocks created. Changes needed to be made and made quickly.

Luckily, the Robinson family and MX Sports listened. They have worked tirelessly to recreate and reintegrate that layer of topsoil that made Unadilla so great. Bringing the surface back to its old form is a work in progress but progress is definitely being made. Riders now have dirt to shape and mold, creating lines and options. Loamy ruts and berms are slowly starting to replace the days when the track would get down to bedrock during practice.

Is it perfect? No. But it is now a track that riders are warming to. Unadilla will never have the traction of a Millville but it was never meant to. In moto terms, upstate New York equates rocky and a bit slippery. That’s just how the base soil forms in most areas. Broome-Tioga, just outside of Binghamton, was exactly the same way. They would bring in tons of mulch to add traction to an otherwise rocky surface. Unadilla is under the same transition. It was a legendary track that lost its way but is trending back in the right direction. For a facility that holds so much respect throughout history, Unadilla deserves nothing less than a breath of fresh air, or fresh topsoil in this case.

As for getting to the event, it’s not exactly the most convenient. Unadilla is located in New Berlin, a sleepy town in between Binghamton and Utica. Riders and team personnel will drive over an hour on Saturday morning, leaving Utica’s convenience and heading into the green countryside to the south. While some of the newer races are right in the heart of town, like Thunder Valley for example, Unadilla is a throwback to yesteryear in so many ways. Cell phone service has improved but for years, Unadilla was like entering this vortex where no outside communication existed, only motocross. Maybe that’s a good thing now that I think about it. In an age where racing can be viewed live from thousands of miles away by simply tapping a button on your phone, Unadilla’s remote location still provides that feeling of solitude and “motocross only” for miles around.

Eli Tomac is coming off of a dominating moto two performance in Washougal. He didn’t gain any points on rival Ken Roczen but with a fifty-five point deficit, that ship has probably sailed anyway. Winning races and gaining both confidence and momentum are much more important than the points gained.

Ken Roczen didn’t win Washougal but he was still great in the first moto and still left with the same points lead he entered with. Kenny has shown a willingness to back it down when he deems necessary, a quality that many riders simply can’t master. He doesn’t override the conditions if things are clicking. He isn’t a rider willing to simply “turn his brain off” and twist the throttle. That has served him well and has this season, too.

Cooper Webb is running away with this 250 title. With his lead up to fifty-one points, Cooper has established a nice cushion that he can ride to the checkers in Crawfordsville. He got in a nasty altercation with Savatgy a few weeks ago so it will be interesting to see how that plays out this weekend.

Alex Martin won the 250 overall at the last race and looked great doing it. He is going to be USA’s 250 rider at the Motocross of Nations this September so look for A-Mart to ride a wave of momentum this weekend in NY.

Austin Forkner won the first moto of his career in Washougal’s second moto. He had help from the pile-up, sure, but he still rode like a veteran and stamped his rookie outdoor season as a success.

J-Mart was a victim of the Savatgy-Webb incident and has a couple of broken ribs to show for it. He seems like he is ready for 2016 to be over with and a new start with GEICO Honda.

Trey Canard suffered a concussion just before Washougal and doesn’t look to be back anytime soon. Trey will be moving on from Honda at the end of the season, switching brands for the first time in his pro career.

Tyler Bowers suffered a shoulder injury at Glen Helen and will miss Unadilla. He was informed he won’t be returning to the Monster Energy/Pro Circuit team for 2017, adding insult to injury for The Bear.

Michael Phelps joins Alex Martin and Cooper Webb on Team USA for the MXoN. Phelps fails to qualify because, well, he has never ridden a dirt bike before. But, in his defense, he is willing to show up and that’s good enough for me.

Phil Nicoletti and Justin Barcia round the first lap in first and second place, sending the New York fans into a frenzy.

J-Mart spends his weekend negotiating E-Z Up sales on Craigslist.

Geoff Meyer writes something unbiased and genuine. This is my boldest prediction ever.