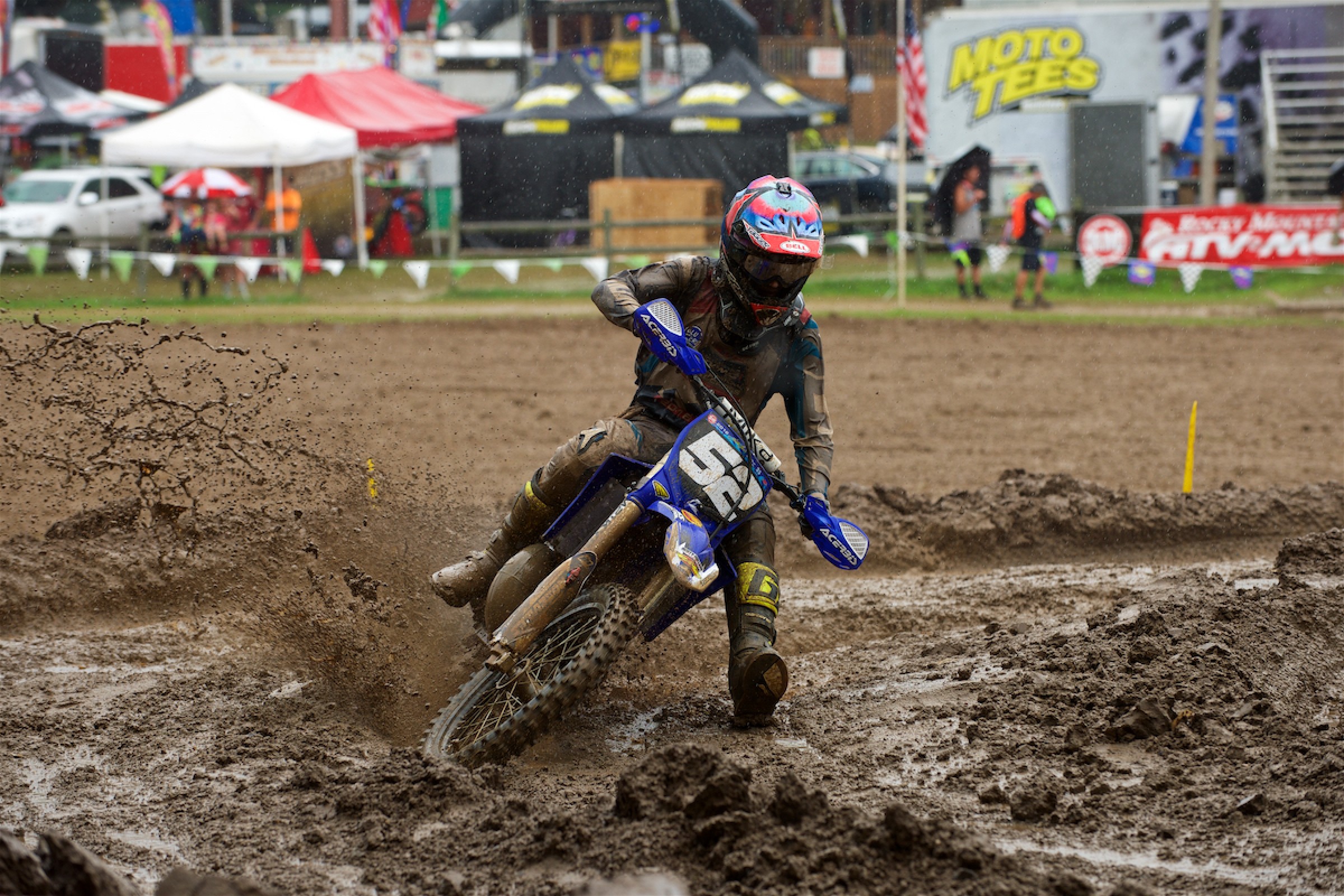 It has rained every day at the 35th Annual Rocky Mountain ATV/MC AMA Amateur National Motocross Championship, presented by AMSOIL, at Loretta Lynn’s. The weather has impacted nearly everything. Here’s what we learned on Day 2, Wednesday.

If you want more, you can check out results here or watch the motos live at RacerTV.com.

5. There Will Be Mud

The 2016 edition of this event is officially going to be remembered as the mud year. Each time the track nearly dries into a manageable condition, rain returns to soak it again. It rained Monday afternoon, Tuesday morning, Wednesday afternoon and then again Wednesday night. The latter half of Wednesday’s races were big-time mudders, on a track that was slick in spots, sticky in others, and bumpy everywhere. The general rule is that at least one of each rider’s three motos at Loretta’s will be run in the mud—but this year we’re on the verge of having a mud race in all three.

4. There Will Be Inconsistency

These mud races have created havoc in some classes. Austin Stroupe’s dream comeback story in 25+ got washed away. After winning moto one on Tuesday, he crashed in a muddy moto two and didn’t finish. The Mini Sr. 2 (12-14) results are crazy. Hardy Munoz won moto two in the mud but has 8-1 scores now; Dillan Schwartz has a 2-16 and Levi Kitchen a 3-34. Carson Mumford came into the mini classes with big expectations on his Amsoil (GEICO) Honda CRF150R, but the mud has taken him down over and over. Ty Masterpool leads that class right now with 1-5 scores.

The 85 (9-11) class was already nuts, with Jordan Biese winning the first moto with last lap moves while everyone else was crashing everywhere in the mud. In moto two, Matt Leblanc, who didn’t even make the gate in moto one with bike problems, won by a big margin. Jett Reynolds has been dominant here in the past, but this time the kid from the California high desert is just trying to play the consistency game in the mud. He’s looking good for the title with 2-2 scores.

We’re all officially old. In the 51 (4-6) class, Seth Dennis took the win. His dad actually once finished second overall in a class at Loretta’s—when he was in the 51cc (7-8) class on a Cobra!

Lots of relatables in the 51cc classes. Jaden Palmer won the first 51cc (7-8) moto—his uncle is “Wild” Wally Palmer of the EnduroCross series. Palmer also won a KTM Jr SX Challenge race earlier this year and dropped his bike to do some break dancing on the podium. Kid is already garnering a reputation!

One thing that doesn’t get handed down in the 51cc classes are first names. These things are fresh! This included a Jaden (Palmer) and Jadon (Slusher) 1-2 finish in 51 (7-8), with other names in that class including Jayce Cashdollar, Zy Floyd, Mason Dickson, Diesel Thomas and more.

The Masterpool family remains a big part of the amateur racing scene, even with the tragic loss a few years back of Jesse Masterpool, who would be a pro rider by now. Ty Masterpool is solid on 85cc bikes, and holds the overall lead in Mini Sr. 2 with 1-5 scores. Big brother Jake scored a big win on Wednesday in 450 B, and then had a third in a 250 B moto. Jake is called The Mayor, as he is one of the most likeable and enthusiastic riders in the amateur ranks.

Multi-generation riders are everywhere, from Barry Carsten’s son Cory just missing a podium in 450 B, to Maximus Vohland (son of Tallon) battling for the Mini Sr. 1 win, to Evan Ferry turning in his best results yet at the Ranch, hovering in the podium area. We also met a rider in the 50+ class whose dad once won the 50+ class here back in the '90s.

Breakouts can be a problem for pre-teen and teenaged riders, but we’re only talking about the good kind here. In 65s, Hunter Yoder has gone next level this year, now getting away from a pack that was once very close in the 65 classes. He absolutely dominated his first two motos so far this week.

In Supermini, Joe Shimoda, originally of Japan, got his first-ever Loretta’s gold moto medal by taking a win in the afternoon. Lance Kobusch was a favorite in that class but he crashed while battling Shimoda for second, then later had bike problems. Shimoda will try to hold on for his first title, in a year that’s already full of firsts for him—this is the first year he’s comfortable enough with English to try doing podium interviews.

Garrett Marchbanks is expected to be next in line at Kawasaki Team Green behind Austin Forkner, but the mud got him in his first 250 B moto, where he finished 21st. He bounced back on Wednesday to win two motos, the first Schoolboy 2 moto and the second 250 B moto.

Bradley Taft and Chase Sexton are favorites for the AMA Horizon Award, and they’ve ridden well. Sexton drew bad gate picks and got bad starts, but has a moto win in Open Pro Sport and came back to fifth in 250 A. Taft took the 250 A moto win and has a third in moto one of Open Pro Sport.

Then there’s the old warhorse Robbie Reynard in 25+. RR picked a YZ125 this year to race against 450s, and he came from last to third in moto one. In a super muddy moto two, he won easily, with lap times nearly ten seconds faster than anyone else. Some dudes don’t forget how to ride 125s—or mud races at Loretta’s.