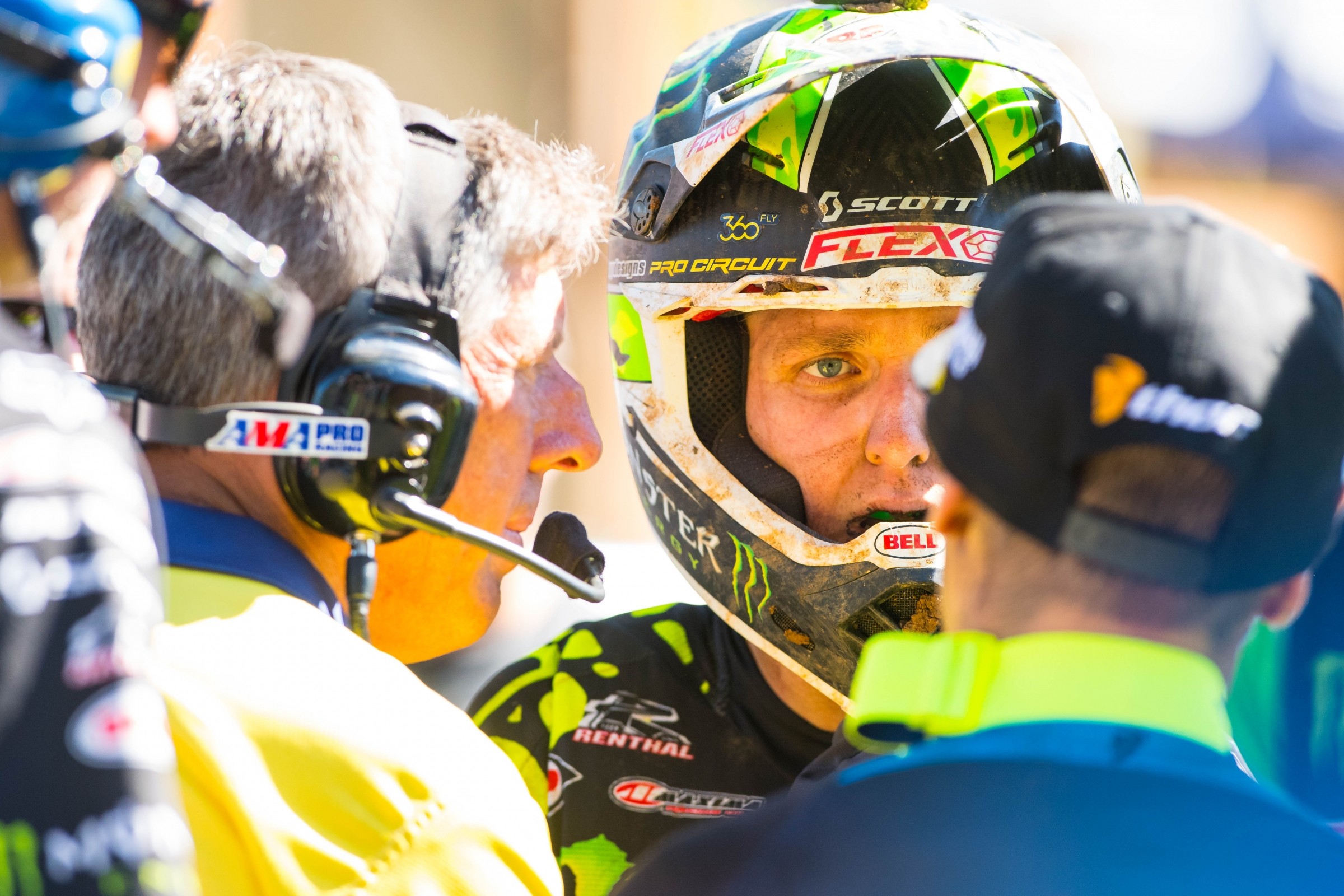 Breakdown The Young and the Reckless

Cooper Webb and Joey Savatgy had a bit of a run-in on the first lap of Washougal’s second moto. Stuff like this happens in motocross. This was a bit more personal, though, and had been building for some time. Let’s take a look at how it all unfolded and what it means moving forward.

On the first lap of a moto, there are generally two different trains of thought. For some, they are trying to navigate a freshly watered, slippery track and not make a huge mistake. They don’t make any overly aggressive moves and are simply trying to maintain their spot until the track works in and the chaos slows a bit. After a lap or two, they up their aggression and try to make a charge forward. While they may not have made much progress on that opening lap or two, they also didn’t toss away a good start or put themselves at the back of the pack with an early crash.

The other ideology is to absolutely drop the hammer on the first lap. Passing is certainly the easiest on the opening lap as riders are bunched together and multiple spots can be made up within a few turns. It’s also the most likely time for a pile-up or otherwise unlikely crash. At a track like Washougal, where water is applied heavily between each moto, the first lap is treacherous. The hard base has a slick layer of water on top of it, taking all of the predictability away during braking and acceleration, as well as using the side knob of the tire. Pushing hard on that first lap can pay dividends but can also see you end up on the ground much more easily.

For Joey Savatgy and Cooper Webb in the second moto, they were out front on the first lap and in a great position to battle for a win. Both were surely going to put in quick laps early but when two of the best riders are out front, I think they usually take some caution on the first lap in icy conditions. They find that happy balance between sprinting and carelessness.

That is, unless emotion is involved.

See, I think Savatgy and Webb have been harboring some hard feelings toward each other for quite a while. There were the supercross battles that came down to a few points for the championship. Then, as this Lucas Oil Pro Motocross Championship has rolled on, there have been several on track incidents and even more words off the track. Cooper didn’t take too kindly to Savatgy’s win at the High Point National as his pass near a downed rider was reviewed and ultimately deemed fair play. Cooper had a few words for Savatgy and his crew after the race, adding fuel to the fire. As that animosity has festered, it was only going to take one incident to reach a boil.

So when Savatgy came down that hill and saw an opening on Cooper’s inside, he took his shot. Whether that shot was clean, dirty, ill-timed, foolish, brilliant, silly, brash, genius or any combination of these is up for debate. What is not up for debate is how Webb was going to view it and respond. To make that move on the first lap against someone who there is that much ill-will shared, it’s basically a declaration of war. There wasn’t contact and no one crashed from Savatgy’s pass but that was of zero consequence to Webb at that moment. Watching on the trackside television, as soon as I saw the pass, I knew someone was going to hit the dirt.

Webb wears his emotions on his sleeve and is completely unopposed to retaliation or any other form of cat-and-mouse that is proposed. As Webb chased Savatgy down the hill and into the chicane, I didn’t think he would have a chance to make a move so quickly but a window opened. Savatgy chose the second rut in that first left hand turn and Webb dove to the inside. Webb made a picture-perfect move to the inside but then chose, completely based on an emotional response, to check up and force Savatgy to run into the back of him. For racers, this is known as a brake check. I have watched the replay at least 25 times and Cooper’s right foot is firmly planted on the rear brake just before Savatgy makes contact. The brake check move isn’t used very often and is typically one saved for valid reasons or pure anger. There is zero doubt that he was furious with Savatgy’s move and wanted payback. What he didn’t plan for was losing his balance, bouncing off of Jeremy Martin, and rocketing his bike out of the rut. Savatgy, on the other hand, ran into Webb when he stopped and stalled his bike in the process, nearly high-siding over him. Poor Jeremy Martin was just minding his own business, trying to go around the fracas and got run into and then run over. In one turn, the top three in points were all sprawled out, scrambling to remount while the pack was riding around them and their bikes.

These two moves by Savatgy and Webb can be interpreted many different ways. Each camp is going to see them very differently, and trying to say who is right or wrong is purely opinion. My opinion is that Savatgy saw a chance to take a shot at Webb and also the lead. I don’t think he likes Cooper so it was a chance to give him the business on his way to the front. He didn’t make contact but didn’t really accomplish much either, as he took them both to the track edge and allowed Austin Forkner to take the lead. His move had racing tactics involved but was fueled by dislike more than anything else.

Webb’s retaliation was filled with rage. He didn’t go in there and blast Savatgy like some would, but he definitely was going to make his point known. Underneath his helmet, I imagine his face was full of gnarled teeth and bloodshot eyes as he roared down the hill in pursuit of vengeance. In Webb’s mind, he was nicer than he could have been and Savatgy rear-ended him, causing them both to go down. Savatgy is going to see it as a full brake check and dirty pool. It’s just different perspective and complete bias from each. Trying to convince either side of anything different is a complete waste of time. That’s just how these things go.

The only real problem from my perspective, and questionable side of this, was the timing. On the first lap, I don’t see a need for this level of aggression in the position they were in. Both riders have no reason to fear anyone behind them, so they should have been calm and level headed that first lap. They are arguably the two fastest riders in the class and should have no problems with their respective 1-2 starts. Taking big chances and making uber-aggressive moves on the first lap puts everything in jeopardy. There is more than thirty minutes of racing left to sort out the win. I just didn’t see the upside of that level of aggression so early. The only possible reason is the simple fact that these guys don’t like each other, making an otherwise ill-advised move seem appealing. Savatgy needs big points to regain a title chance and putting Webb off the track is one way to get some back. The problem with that is once you draw first blood with a brash rider like Cooper, he will move heaven and earth to rain down hell upon the offender. And, once Cooper realized it was Savatgy who took him to the banners, I can all but promise you that he didn’t care at all about points anymore. He wanted back around Savatgy whether he went around, over, or through him. Many have compared Cooper Webb to Damon Bradshaw in his early days. If you were around to see him uncork his wrath upon Jeff Matiasevich time and time again, you will understand the imminent danger that comes with poking an irritable, North Carolina bear.

In this case, aggression and immaturity by both riders caused them to ruin their second moto. I truly believe that in five years, they will both be elite level 450 riders and look back on this situation and laugh. They will have matured and see the dynamic and their options differently. These world class 250 racers are still kids and make split second decisions fueled by ambition, anger, and enviable levels of testosterone. That is going to lead to regrettable outcomes at times. Such is the nature of this sport, especially for the youngsters.

William Shakespeare once wrote “discretion is the better part of valor” and both of these riders could have probably learned something from ol’ Billy Shakes. These two are young and will become wiser with time but this weekend was a learning moment to be sure.