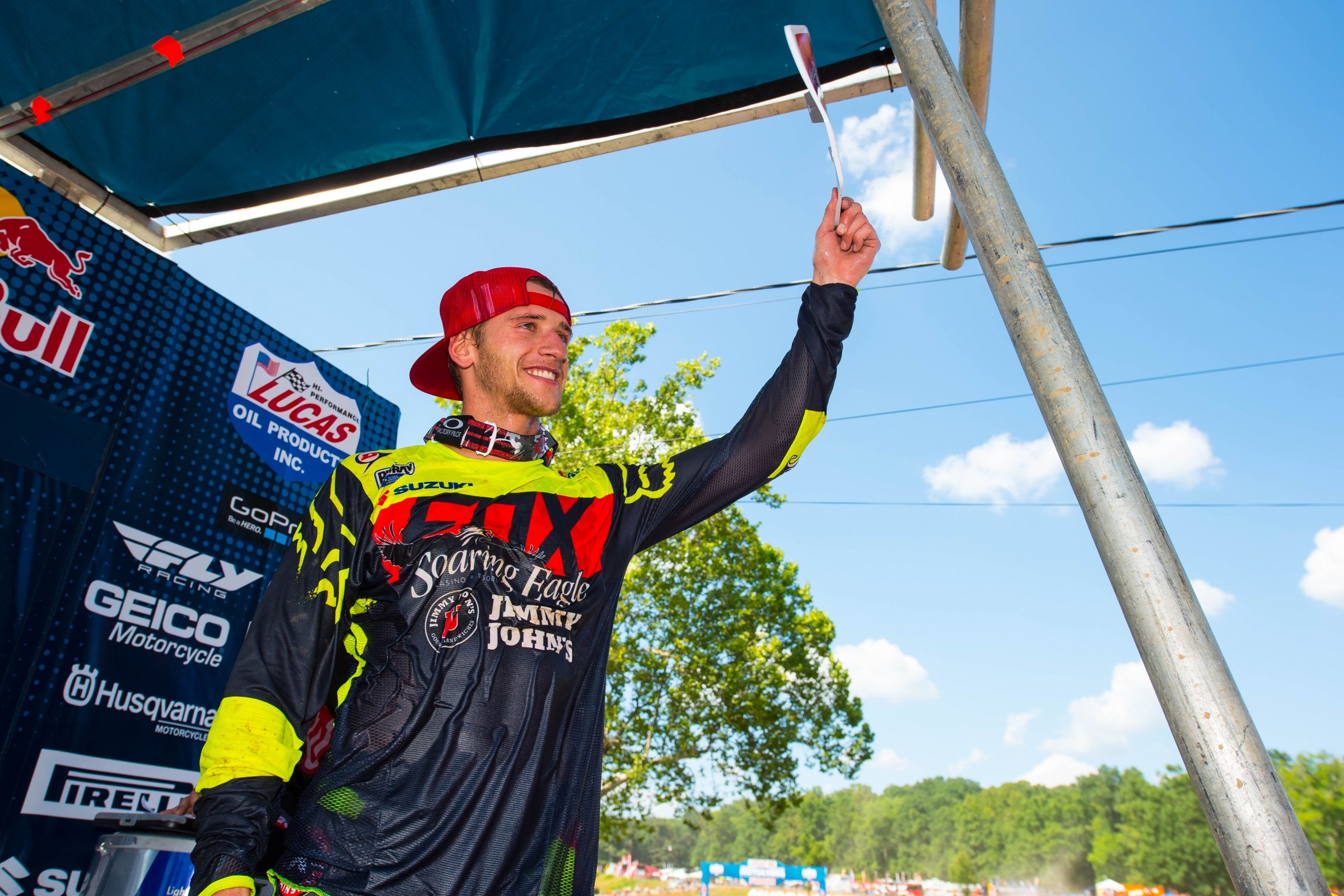 Ken Roczen keeps the phrase going: he’s won all but one moto this year and the only moto he didn’t win involved a bike malfunction. But while he keeps his impressive run alive, it was much tougher for the Soaring Eagle/Jimmy John’s/RCH Suzuki rider at Muddy Creek, as Monster Energy Kawasaki’s Eli Tomac challenged him hard all day. Kenny talked about in the post-race press conference.

Racer X: Tell us about your day.
Ken Roczen: To be honest, I kind of struggled a little bit all day. It wasn’t my favorite track at all. But I didn’t go crazy about it after practice. I knew racing would be different, but I didn’t feel like home today on the track. But besides that I rode good. Obviously Eli crushed it today, but for me it doesn’t matter if I win by twenty seconds or half a second, but a win is a win for me. He’s been fighting hard but I was able to keep him behind me and that’s really all I care about and all that matters. And we’re leaving it safe. So all in all it was another great weekend for me, we went 1-1. I’m just as happy leaving here as any other race. That’s all that really matters to me.

Talk about the heat and humidity today. Probably the hottest race we’ve seen so far.
Yeah, definitely. It was definitely the hottest race we’ve had all year and I don’t even remember, last year, having a really hot one. We haven’t had a hot one in a long time. But I’m in Florida so it’s okay. We actually got a little bit lucky because it was 97 on Thursday, it was miserable. It’s been really hot down there. It’s good to have that so when you come here it’s less of a shock. I know my body, I know how it works in the heat so it was okay. I didn’t struggle with that.

Eli got close several times. Are you able to ignore that and just hit your lines and run your pace, or do you try to respond and go faster or change lines?
My mentality was, I want to win but I’m not going to go over the line and try to win it at any price. I tried to keep him behind me as long as I could, and I actually think that my bike wasn’t working as great here. I’m not going crazy on it or anything but the guys are going to come down to Florida and we’re going to hang out and do some testing. I’ve got something that works but I think I have to muscle the bike sometimes a little too much. I think we can make it a little easier. But overall I can’t complain. Me, the team, the mechanics, we have been working really good together and we’re confident at what we’re doing.

Yeah, but with Eli right behind me, I knew he would be strong. I knew he would keep pushing hard so I had to keep pushing hard. We were going for it pretty much the whole moto. Also, like I said, the track wasn’t really my thing. I think I could have found better lines that would have made it easier on me. Obviously being the leader it’s kind of tough. You take one wrong line and the guy behind you just catches right up. But it’s all good.

There are a section of jumps on the other side of the track, in front of all the fans, and you were doing something special in the first moto. You passed Nicoletti there, you caught up to Seely there. You were staying so much lower over the big jump in that section. You were making up ridiculous time there—do you know what you did?
It seemed like there were just airing it out. I was able to stay a lot lower and keep my momentum. I guess all that work at Red Bull Straight Rhythm last year is paying off. (Laughs) No, but I just think that if someone is in front of me and I want to get around him I’m able to push the bike down and get that much lower over the jumps. I’m actually really happy that in both motos I was able to make my passes really quickly. Especially the first one, I felt like I was making my passes really quickly. I was happy with that because both motos I was actually behind Eli. Especially the second one, he got around me and I made passes and got it back. If I don’t get a good start, I try not to panic. I just try to rely on my fitness and my capabilities.

You have made so many passes this year on the first lap. What is that? Are you warmed up ready? Do you not need any time to get going and figure out the lines that might have changed? You seem like you’re at full race pace from the very start. Is this something you actually work on?
No. In my eyes, there’s no way to train that. Like I’ve said, I’m a racer. I struggled really bad in practice but I don’t care about practice. As soon as the gate drops I’m on. It doesn’t seem normal for other riders to be like that but for me it seems normal. I don’t know why. I guess my dad just taught me well. You’re racing to win, you have to get up there as quickly as possible.

But actually, three quarters of the race into the first moto, I started really riding terrible. I was hitting the wrong lines and I felt like I had to really muscle my bike in there. I used a lot of energy in the first moto, which I normally don’t do. I’m usually really conservative on energy. But everything worked out.

Why do you think you struggled a bit on this track?
Um, the track is super tight in spots. There was a pretty hard base that’s slippery, and you have some off cambers. The way the track developed from this morning, they throw the dirt on top but they leave the hard base underneath, so it was just super hard in some spots and that made it really slippery. From the first practice on, I just didn’t feel that comfortable.