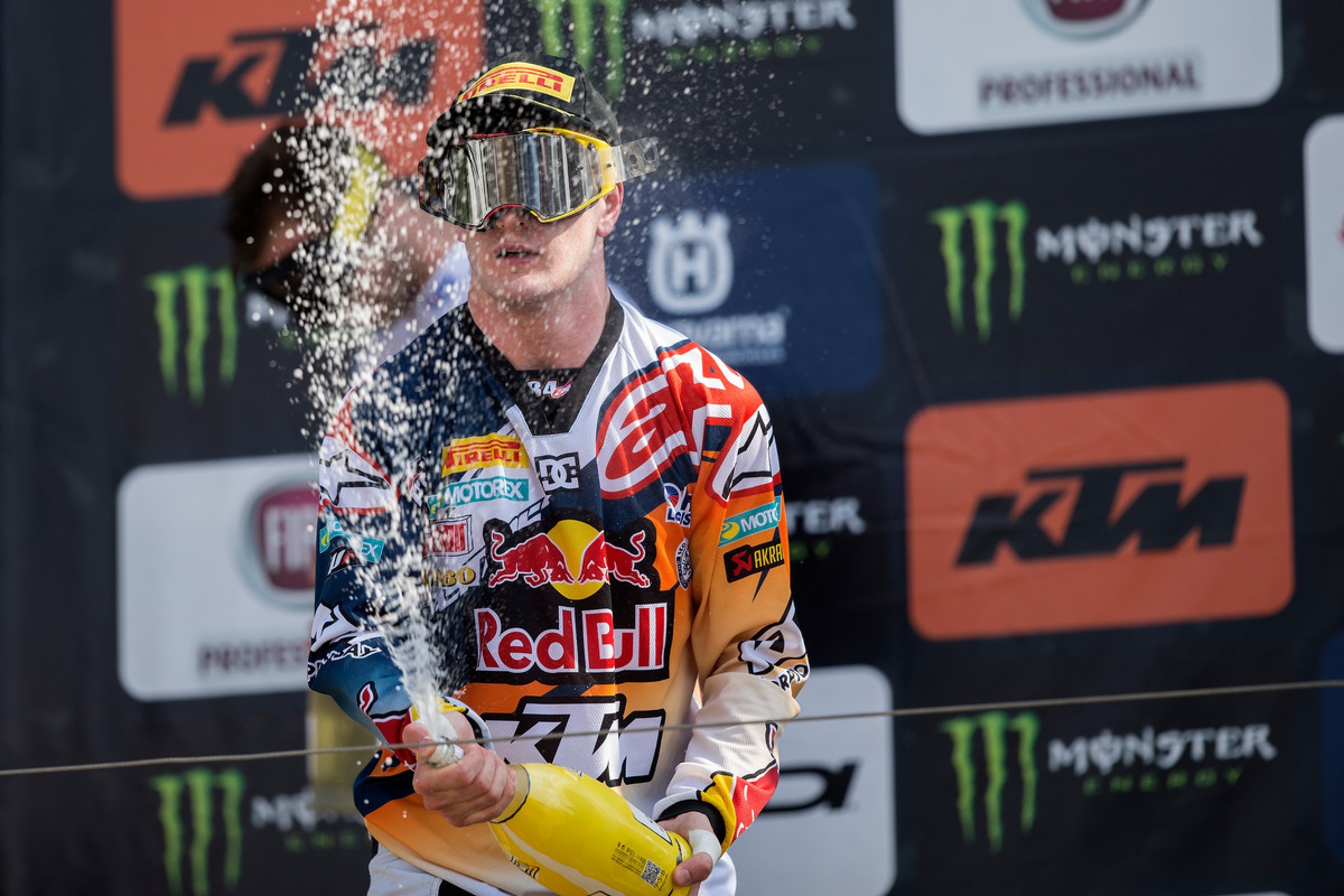 For the seventh time from twelve MXGP rounds this year, Honda Gariboldi and Red Bull KTM’s Jeffrey Herlings spoke first in the post-race press conferences. The 19-year-old Slovenian and the 21-year-old Dutchman (due to leave the MX2 class for 2017 due to a revised FIM ruling on multiple championship winners) have the Grand Prix season in their respective hands and are making hay at the very top level in their individual ways.

Gajser , behind a combination of consistently good starts on the works HRC machine, youthful vigour, strength, whips, scrubs, torque and confidence, chalked another big win out of the premier MXGP class around the compact and sandy layout of Mantova for the Grand Prix of Lombardia (a central region of Italy). Several weeks after taking his rookie season plight directly to the toes of incumbent champion Romain Febvre in France, Gajser dealt with the formidable Tony Cairoli on this occasion through a close and very watchable second moto duel.

The irony of the battle was that there were probably just as much public screaming for Gajser as there for was for the popular eight times world champ. Yellow, red and the 243 number have coloured Grand Prix fixtures more frequently and especially in Italy which is one of the easier destinations for new and rabid Slovenian fans to reach.

Febvre was out of the picture due to the concussion he sustained at Matterley Basin and although scans revealed no side effects of the smash, an attempt to ride the Monster Energy Yamaha prior to Mantova (the FIM would have barred him from competing anyway) showed that the Frenchman was still not on cue for fast speed. Now Febvre has to play a waiting game and while his hopes of defending the MXGP title are all but gone he can still profit from the summer break of three weekends to fully heal. Cairoli was also far from fit. The Sicilian had landed heavily on the Quad from Matterley Basin the previous Sunday and had broken a small piece of bone in his left hand. He barely lapped in anger on Saturday.

The tight first left turn at Mantova was followed by an even trickier right that bottlenecked the pack. Almost every race start saw riders go down (the luckless Ben Townley dropped his Suzuki twice after being nudged on the opening corner) and getting through the section was imperative. Monster Energy Kawasaki’s Clement Desalle posted his first podium result on the works KX450F and after a long journey back to full fitness cited his solid starts as a “key ingredient” that led to a well-earned third place for the relieved Belgian behind the equally efficient Gautier Paulin—the Frenchman now on the box three times in the last four fixtures. He’s looking a secure bet for the Husqvarna factory if the rumours about his destination for 2017 turn out to be true.

Cairoli’s excellence at the second moto start coupled with the power of painkillers helped set up the spar with Gajser. The tussle involved a few close calls between the athletes that almost bridge generations (Cairoli is eleven years Gajser’s senior). Some position changes heightened the tension and eventually it was patience from the Honda man until Cairoli’s lap-times started to wane into the two minute bracket as his pursuer kept steady in the 58s-59s that helped decide the fare.

Gajser’s 100 percent podium streak powered on and the rookie took his third double from the last four Grands Prix on a rough and churned course that could not have been more different to the fast expanses of Matterley Basin last weekend. Cairoli sat fourth overall and his damage limitation lifted him to second in the standings and with a couple of finger nails in Gajser’s shadow to the tune of 92 points; almost two rounds with six to go.

Monster Energy Yamaha’s Jeremy Van Horebeek was quick without being too spectacular and Spain’s Jose Butron caught the eye with some bright starts. The Iberian Peninsula’s latest young hope, Iker Larranaga, was also distinctive with a second MX2 moto start in the top five and was comfortable with the pace until the rookie had a problem with his rear shock and faded back. Team HRC’s Evgeny Bobryshev’s MXGP Pole Position on Saturday promised much but the Russian seemed affected by the heat and was also a ripe example of how lacklustre starts cast a rider aside at Mantova.

Monster Energy DRT Kawasaki’s Tommy Searle had to roll into the gate in 34th after a second turn fall and holed exhaust in the Qualification Heat. An admirable push to 12th in the initial moto was later written-off when the Brit was disqualified for course cutting allegedly on the word of a marshal. The team provided the FIM with GPS and data evidence that Searle had been knocked off the track and actually lost time in the incident. The sanction remained in place but it was not the only time the FIM found themselves dealing with an appeal.

The second MX2 moto saw several riders caught in the gate and with claims that the barrier had moved before dropping causing many to miscue. A similar occurrence had led to a red flag and restart on Saturday. The moto continued however with Monster Energy Kawasaki’s Dylan Ferrandis and Suzuki’s Jeremy Seewer among the afflicted. The slight mess created a gripping situation where up to four riders were disputing the final podium slot until the final circulation. Seewer barrelled back to sixth place but made a mistake with two laps to go. Rockstar Energy Husqvarna’s Thomas Covington had his most convincing outing yet on the works FC250 and just couldn’t pass Kemea Yamaha’s Benoit Paturel to make the top three— missing out on the champagne by one point. The trophy went to Ferrandis who freely admitted that his day had been dramatic and error-prone (he fell three times at least in the first race). Behind Herlings it was HSF Logistics Motorsport’s Brian Bogers who popped up with a first career rostrum appearance. With Suzuki’s Bas Vaessen taking honours for the first time in the EMX250 European Championship suddenly there is a batch of Dutch youngsters hitting form.

Leading the orange charge was of course Herlings, the first Dutchman to win at Mantova since 2008. This was an astonishing display of riding and especially with ‘84’ still dealing with the pain of a crack in his right heel. His ability to find the smoothest parts through bumps, waves, trims, walls and the sandiest feature of the terrain was masterful. Twenty-three moto wins from twenty-four indicates domination but Mantova was sheer excellence and the experience of Herlings in full flight is only likely to enrich when he gets in to sandier climes like Assen and Lommel. Herlings was being interviewed for live TV even before second place finisher, teammate Pauls Jonass (hamstrung in the first moto with a second turn pile-up), made it across the finish line—the gap was almost one minute and fourteen seconds and well over half a lap.

Herlings’ march goes on and now with a gap of 169 points over Seewer, which translates to more than three Grands Prix with six left on the slate. At this rate U.S. audiences will easily see a new champion in action for the season-closing events in Charlotte and Glen Helen and potentially with the outgoing star chasing the perfect GP record of overall wins which has never been achieved before.