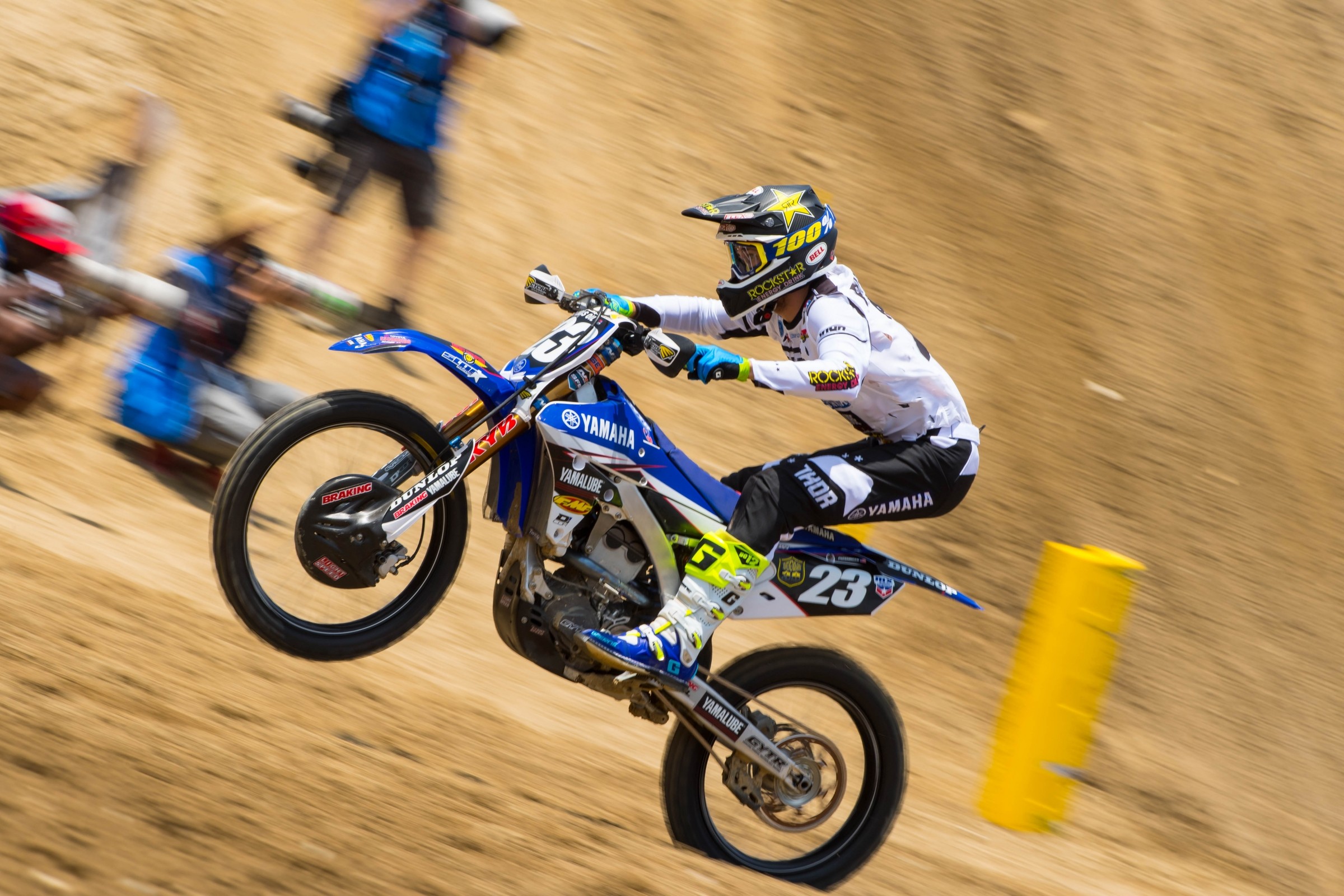 This sport can take a while to get things figured out at the professional level, even for the brightest of rookies. Good thing for Monster Energy/Pro Circuit Kawasaki their latest addition, Austin Forkner, is a quick learner. He’s been great in qualifying, took third in a moto at Glen Helen, and was even in a position for an overall podium there before a mistake dropped him a few spots. He’s got podium speed, no question, and now that he’s armed with a bit more experience, that podium just might come at High Point. –Aaron Hansel

Then There Were Two

In case you’ve been living under a crusty stack of worn out grips, you know Ryan Dungey injured his neck in a crash at Thunder Valley and won’t be back for the rest of the season. Now fourth-ranked Trey Canard is out for the weekend, too. It leaves Eli Tomac, at least for now, as the only rider left who might be able to keep Roczen from running away with this thing. Sure, there are other riders who can win, but so far none of them have shown they’ve got what it takes to challenge Roczen. Even Tomac hasn’t reached that level, but if he wants to stay in the hunt he needs to get there this weekend. –Hansel

Dungey’s unfortunate exit from Lucas Oil Pro Motocross has left a void on the podium that’s going to be filled this weekend, but by who? Canard is out, but his teammate Cole Seely has been strong, as has Jason Anderson. Both have been very fast, and both have recorded podium finishes in motos. If not one of them, expect Josh Grant, who’s been ridiculously solid as a fill-in rider for Wil Hahn at Monster Energy Kawasaki, to be standing on the box on Saturday. –Hansel

With the way Cooper Webb has been riding, you’d never know he broke his wrist before the season started. The Yamalube/Star Racing Yamaha rider has won a moto, was on the overall podium at the first two rounds, and his worst overall finish has been a fifth! You know he’s only going to get stronger as the year progresses too. And now that he’s had a week off, we’ll see just how strong he can be at High Point. –Hansel

When a guy has only been outside the top ten once, sits fifth in points, and has finished third in a moto, you’d usually consider it a good start to the season. But what if that guy is Aaron Plessinger? Would those results still be good? Well, it is Plessinger, and those results are pretty good, but you know he wants to do even better. Somehow fifth in points only makes him the fourth-ranked rider on his Yamalube/Star Racing Yamaha team in the standings! Lucas Oil Pro Motocross heading east could be just the change the Ohio native needs to start grabbing some headlines. –Hansel­

High Point’s notorious off-camber turns have played to the success of former GP riders, particularly Frenchmen. David Vuillemin won the overall two straight years in the early 2000s (2000-‘01), and the great JMB took the overall in 1990 (he also finished second overall in 1992). More recently, both Christophe Pourcel and Marvin Musquin have carved up the hillsides with precise lines en route to overall wins. Pourcel had three moto wins in a two-year span (2009-‘10), capturing the overall in 2009. Musquin went 2-1 in 2013 to win the overall in a stirring battle with then-teammate Ken Roczen. Marvin then went 1-1 in 2015. After slow starts in 2016, both seem closer to hitting their stride. Will High Point provide a podium for either? –Chase Stallo

Sure, Jeremy Martin isn’t off to the incredible pace he set in 2014, when he won the first five motos to begin the season. Or even his 2015 pace, when he won three of the first six motos. This shouldn’t be cause for concern, though. Martin knows winning a third-straight 250 title won’t be easy. “I’m going for my third one and it gets harder ever year. Obviously I’m the guy, and there are a lot of guys who are hungry,” he said after Thunder Valley. Martin struggled with illness the first two rounds, and despite feeling better at Thunder Valley, after the race he said he still wasn’t 100 percent. “Round three is the best I’ve felt but I was still hacking after the motos.” Yet, for all his struggles (if you wish to call them that) he’s only three points back of points leader Joey Savatgy. With favorable tracks coming up—RedBud and Spring Creek—Martin is sitting a lot better than most people think. –Stallo

If you questioned Joey Savatgy’s legitimacy in the championship chase after a sub-par performance at Glen Helen, he quickly silenced any doubts with a brilliant 2-1 (could have been 1-1 if not for a late crash in the first moto) performance at Thunder Valley. Aside from Glen Helen (Savatgy was reportedly battling an illness) he’s has been nearly perfect through six motos—winning three and finishing runner-up in another. Despite this, Savatgy wasn’t getting any time off during the recent break in the schedule. “I already got a text from her and she’s not happy I got caught,” Savatgy said of his trainer Jeannie Carmichael (Ricky’s mom) after Thunder Valley. “Her words were, she’s used to working with Ricky and Ricky never gets caught! It’s hard to please someone who’s been in that position, but all in all it was a good weekend. I’m sure she’s happy that I rode well, but she was the first person to text me. She said, ‘We’ve got work to do,’ so it’ll be a long two weeks at the farm.” Will Savatgy’s hot start continue this weekend? –Stallo

Through three rounds, eight different 250 riders have a moto podium to their credit. One of those names is not Zach Osborne. The eleven-year veteran has been stymied by bad starts and crashes, which have forced him to play catch-up too often this year. Currently, he holds two fourth-place finishes in the motos. Osborne has had success at High Point, including a second place overall finish here in 2015. Starts will be the key for the veteran on Saturday—can he get one? –Stallo

“I think it maybe even exceeded my expectations a little bit,” Matt Bisceglia told us after Thunder Valley. The 2013 Horizon Award winner was coming off a 10-10 performance for eighth overall in his first 450 outing after signing a one-race deal with Yoshimura Suzuki, who was without Blake Baggett and James Stewart. The Oregon native will get a second chance this weekend, announcing on Instagram he will travel with the team to High Point. Can he make another solid impression Saturday? –Stallo