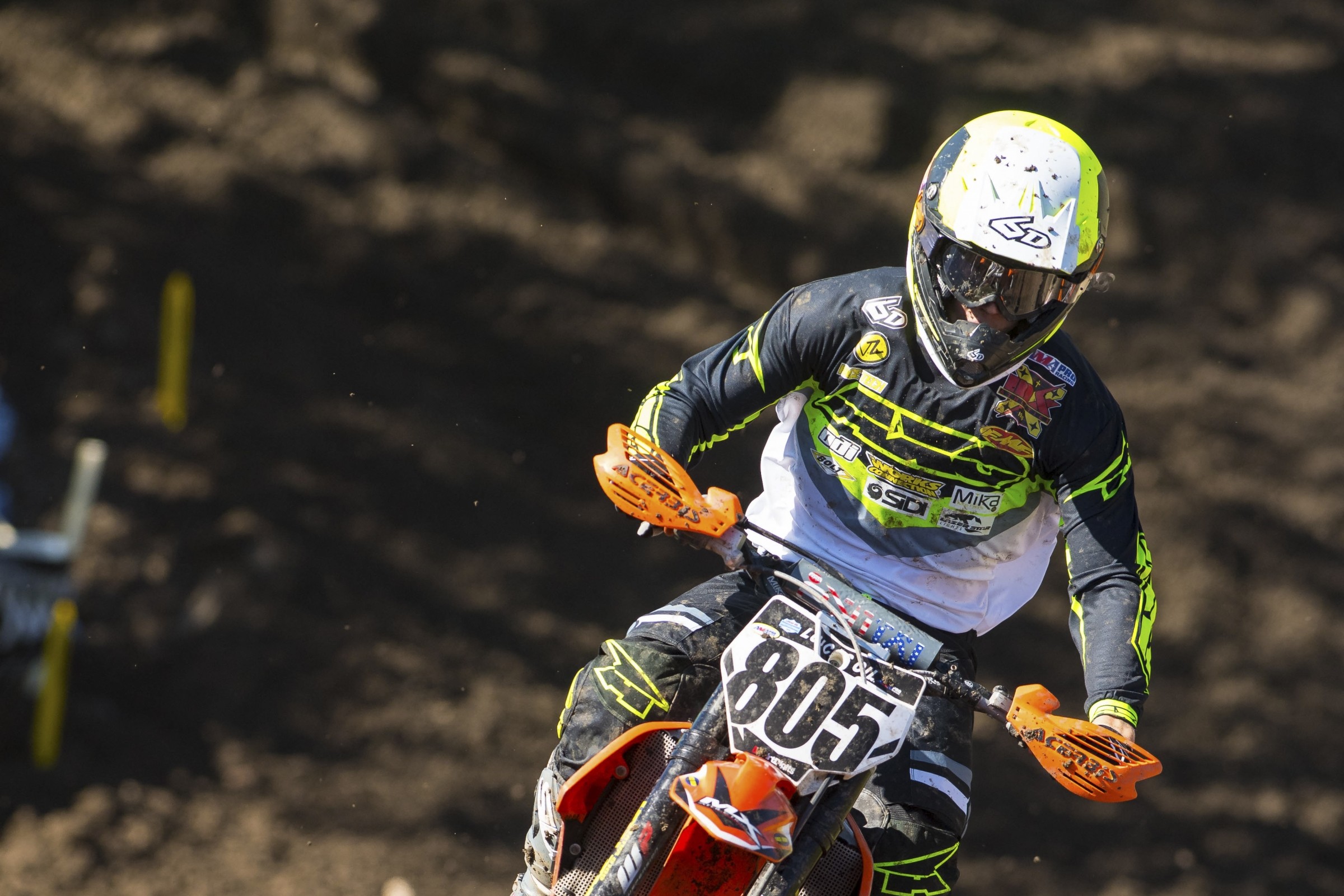 California’s Carlen Gardner is a relatively unknown in the professional ranks and flew under the radar for the majority of his amateur career. The 18 year-old has one Loretta Lynn’s title to his resume from the Two-Stroke B/C class in 2014, but other than that we didn’t know much about him.

After going 23-24 for twenty-third overall in the 450MX class at Thunder Valley, Gardner caught our eye. For a rider without virtually any help to almost make the top twenty in both motos is rare, especially for a rookie. We called Gardner up on Monday night to learn more about him. In the first two minutes of the conversation it was easy to learn that he’s just a quiet, humble guy, who just so happens to rip on a dirt bike.

We also learned that this season Gardner decided to move from northern California to Josh and Michael Mosiman’s family household. Gardner has known the Mosimans since he started racing in the 65cc classes. The two have been riding and training together to try and make a name for themselves in the pro ranks this summer. Both of these riders are rookies and are learning the ropes on a limited budget. Unfortunately we may have to wait and see Gardner again at Washougal because the East Coast nationals are a little tough to get to for him. Here’s how the rest of the conversation went:

Racer X: What’s up, Carlen?
Carlen Gardner: Not too much man, how about you?

We’re just catching up with you. Whenever we see a rider in the results that people may not know much about we like to give them some exposure. You did the first three rounds and you’re a rookie. Tell us a little bit about who you are.
I’m 18 years old and I just turned pro. I’m just trying it out to see where I stand because I wasn’t going to gain anything from the amateur ranks. I’m just on a budget and I’m trying to make it racing motocross.

As an amateur I didn’t really have that many impressive results besides winning the Two-Stroke championship at Loretta Lynn’s two years ago. That was when I thought I would receive more support. That is where I got hooked up with Race Tech, who has been one of my biggest supporters. Other than that I was kind of mediocre. I could never make it to all of the big nationals to get my name out. I could only make it to a few. I never had any showings that put myself in a good position.

The way amateur motocross is set up now is that these young riders are signed to teams really early. It’s hard to stand out when teams have already looked past you.
It’s not that I expected something to come from that championship, but I thought I might get a little more support. I definitely knew I wasn’t going to get a ride from it. It definitely put my name out there so that I was known, but I knew I needed to make something happen to get my name out there more. I did Amsoil Arenacross this year and I had some good results. I thought about what I would gain from maybe winning an A class championship at Loretta’s this summer. I thought about what the sponsors look at to give someone a ride. At that point I realized I wouldn’t get a ride and so I trained harder and decided to turn pro. That’s the best way to tell if you’re ready or not.

What was the plan after you had gained your supercross points? Did you want to jump into supercross, or were the nationals just always the next step?
I’d definitely like to get to supercross, but I’m still young and have a lot to learn. The plan was that if I had gotten more support then I would do some supercross. If I stayed with the same program I have, which is just my dad and I, then I would stay in arenacross. The outdoors shows who is putting in the work and who really isn’t. We decided to do the ones we can to get better. It’s not really showing anything, but I’m bettering myself for whatever comes next.

Are you going to be able to go to all of the nationals this summer?
No, the plan was to do the first three and then possibly Washougal. I’ll find out in a couple weeks if we can do a little more. We’ll see how it goes.

Who else has been a big part of your program other than Race Tech? It seems like they always help out the privateers.
Yeah, Race Tech does so much for me and helps me out in so many ways. I have a local sponsor Laser Star Light Company that has helped pay some entry fees. Then I have companies like 6D, Von Zipper, Sidi Boots, Mika Metals—every little bit helps.

How did the first three races go for you? Did they go as you planned and did you accomplish some goals?
I accomplished some goals. Besides scoring points I made every moto without having to go to a consolation race. I was also consistent with my scores without having one good moto and one bad. Before I turned pro I didn’t have any expectations and I didn’t have any nerves. Each week I got better and better and now I believe that I can get some top twenty results. That will be the next goal for Washougal.

Did you grow up riding at those three tracks, or did you have a new experience?
Thunder Valley was brand new. I had never ridden that track, so it was a little nerve wrecking going into practice. I grew up on Hangtown and Glen Helen. I wasn’t expecting the pace, that’s why the first two rounds didn’t go that well. At Thunder Valley I knew where I stood and I had a better result. I had more confidence in myself.

How hard was it for you to adjust to the altitude?
It wasn’t so bad. We used to race the Mammoth amateur national and that has really high elevation. It’s always hard to adjust to the change, but it wasn’t as bad as I thought. The biggest problem was finding out how it affected the bike.

If you’re not careful with it it’ll jump up and bite you. You can’t catch up. In the second moto I didn’t get a very good start and I didn’t take my time coming through the pack. I forgot to breathe like I did in the first moto. About halfway I couldn’t catch up. Even slowing down and trying to catch my breath didn’t work. Your stomach starts to hurt and you start cramping up. You don’t feel very good. It feels like your chest is burning.

What do you like to do for fun when you aren’t focused on the sport?
I haven’t had a lot of time to try anything fun lately. The off time I have I like to spend time with my family. I like to water ski on the lake as well as mountain biking.

The white @mx_athletics hat was the ticket to a successful podium speech!

You’re young, so when you look into the future what would be a successful career for you in this sport?
My goals always go up. Right now I’m right where I want to be and I’m still building my base. I want to show flashes of brilliance to where I can show people that I can do this as a job and make a living at it. The goal is to land a ride and progress to be a top guy. That’s my mindset right now.

You’ve been under the radar, so how do you change that up? How can you go from being overlooked to getting noticed?
It gets tougher as the years go on. Now it seems like rides are given by who is popular on social media almost. If you’re not out there winning it’s hard to get noticed. I’m definitely not the social media popular guy, so I have to just put in the work and get good results. It’s so hard to keep track of everything. I have about 1,330 followers and it’s like how do I compete with that?

Do you know how to rap? That usually makes a huge difference.
(Laughs) No…my biggest problem is that I haven’t known that many people. In the past six months or so I have met so many people and that’s helped me out a lot. The exposure I get as well as networking will help me gain followers and sponsors. I’m just looking forward to opening some eyes and that’s what I’m going for.