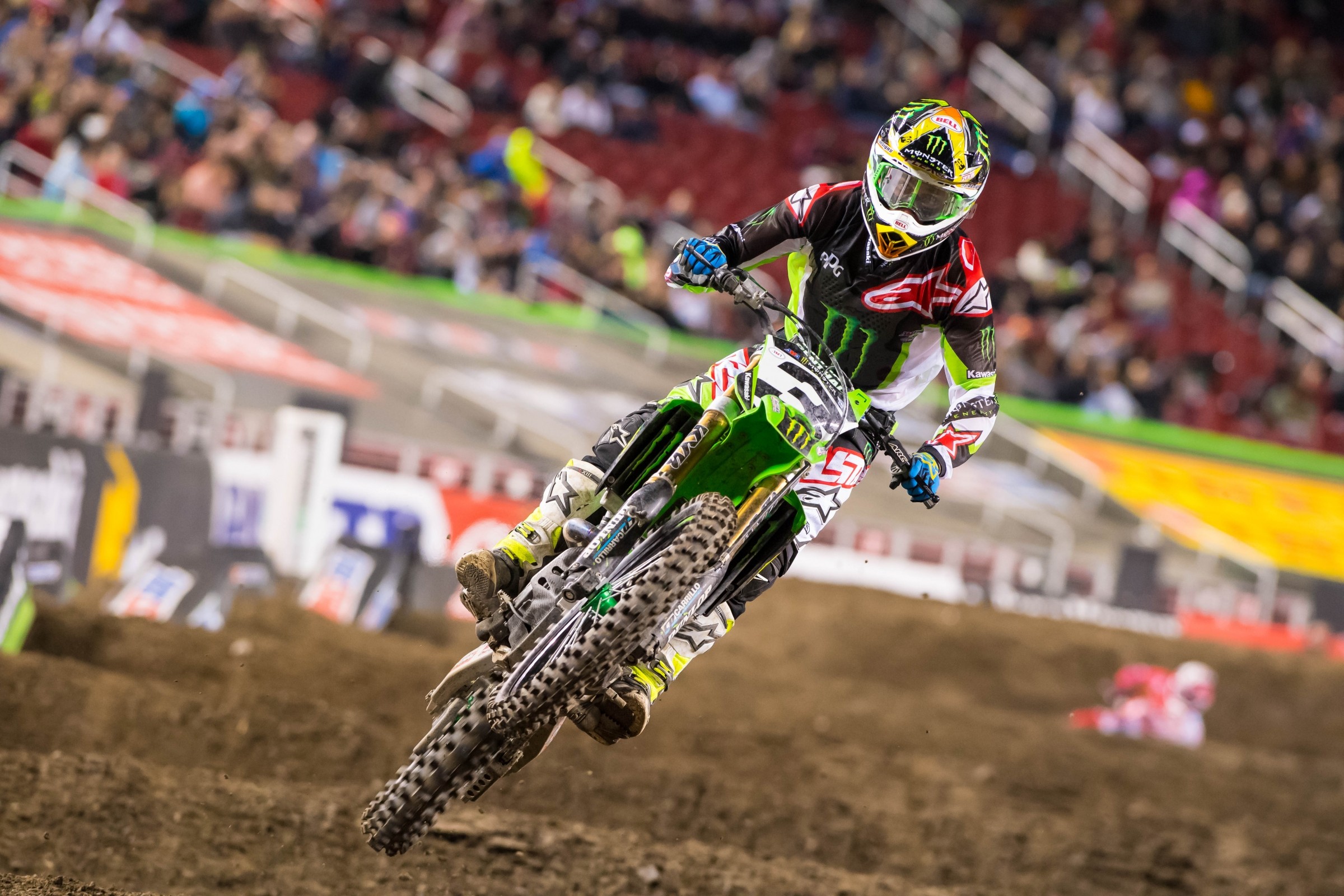 Eli Tomac has had a roller coaster ride of a season thus far, to say the least. Unfortunately, that ride has had more lows than highs as he’s struggled to recover from a long layoff last summer and switching teams for the first time in his professional career. That’s not to say he hasn’t had his moments. Daytona was about as dominating of a day as one could hope for. The consistency has been simply too tough to find, though, and his Saturday nights have provided more questions than answers. Could last Saturday’s runner up finish be the turnaround the Monster Energy Kawasaki team has been waiting for? Or was it another false prophecy in the 2016 Book of Eli?

I think it may be more a matter of circumstance than a sign that the ship has been righted. See, Eli has always found success on conditions similar to Foxborough’s rutty, inconsistent terrain. He saw success in his rough and tumble rookie season at the treacherous 2014 Indianapolis round. The following year at Indy, he would un-lap himself after a crash put him near leader Ryan Dungey for the second half of the race, turning the best lap times of the race. He won last year’s New Jersey Supercross in conditions similar to what we saw in Foxborough as well. He won this year’s Daytona Supercross and we all know that’s an exceptionally tough track. While all of these results and rides were great, they also occurred on tracks that were in the same condition: rough, rutty and atypical from the standard supercross. These tracks are quickly becoming his comfort zone. Even in his poor result at Indy this year, it was only because of a big crash while he was in line for a podium.

What’s the problem you may ask?

The problem is that in today’s supercross world, tracks like Foxborough are becoming more and more rare. If this was say, 1992, Eli would be licking his chops at all of the unpredictability on the schedule. Weather was such a relevant concern back in those days. The ability to effectively cover and protect a track was simply not a reality yet. If it rained hard on a given weekend or even in the days leading up to the event, you could just count on it being muddy. That meant numerous stops on the schedule that would play right into Eli’s hands.

That’s just not the case anymore. Dirt Wurx has perfected the art of track protection. In fact, the only reason that the track was exposed to the weather for Foxborough was a conscious decision to allow moisture in. They had been chasing the dust on Thursday and Friday and were concerned that Saturday’s Fox broadcast would be a poor product if they couldn’t get moisture into the surface. The forecasted light rain set up the perfect solution, but it also exposed them to the off chance that more rain came than expected. As we know, that’s exactly what happened and we awoke to a very soggy track on Saturday morning. Even still, they managed to dry the track into a manageable situation by Saturday afternoon, although the track was still rougher and ruttier than it would have been if the heavy rain had not hit. Still, the fact that the track was as good as it was points to the skill that Feld and Dirt Wurx have with creating exactly the surface and conditions they want, which just so happens to fly in the face of the conditions we have seen Eli excel in.

For Eli to find consistent success in the future, that’s the biggest area of concern that I see. He has to find that elite pace on the prototypical supercross tracks. I know, I know, he was unprepared and on a new team this season, and I recognize that as a relevant factor and maybe even more so than some. But, I also see his rides on those tracks as a liability in a title chase against the likes of Ryan Dungey. The level has been raised so high that one simply can’t have any holes in their game. All conditions have to be mastered, especially those that we see most often. That is how Eli can avoid finding himself down dozens of points by the mid-way point as he has the past two seasons. Those Anaheims, San Diegos, Arlingtons and the like are picture perfect supercross tracks, and are the key weekends that Dungey and Roczen, at times, have the edge over Eli. Those are the conditions that modern day supercross sees week in and week out. Conditions like we have seen recently are the exception, not the rule.

While it was a great performance in Foxborough and exactly what we may see at MetLife Stadium in a few short days, the series has simply evolved past those conditions when looking at the big picture. For long term chances at supercross wins and championship contention, mastering the art of picture perfect conditions is more relevant than ever.