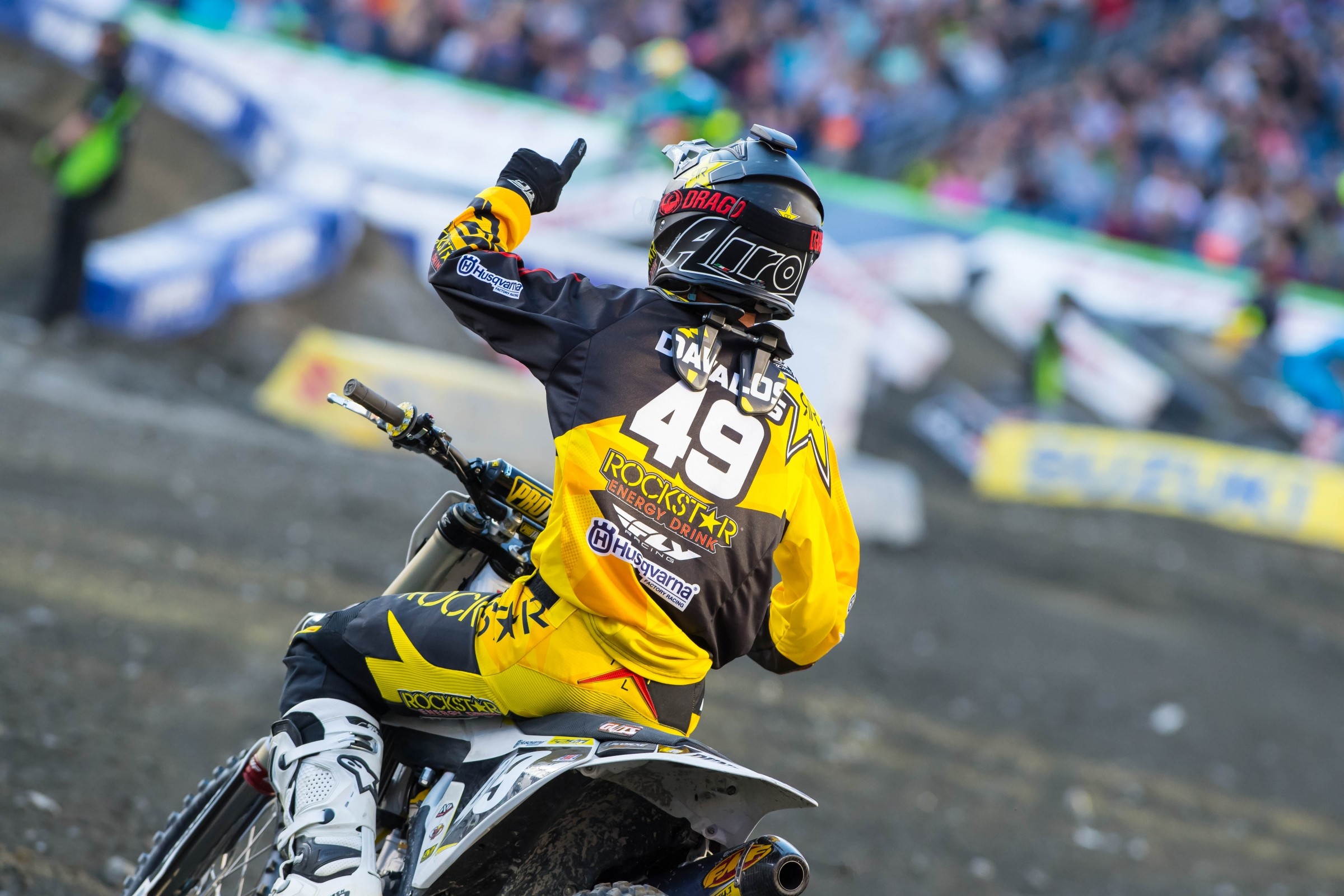 Rockstar Energy Husqvarna’s Martin Davalos is once again left thinking about what might have been, as his title hopes pretty much vanished when visa issues kept him out of the Toronto Supercross, while he was leading the 250SX East Region points. Ouch. He tried bouncing back with wins, but found himself on the ground a few too many times. Finally in Foxborough it came together for him. Why? Let’s find out.

Racer X: How was that?
Martin Davalos: It was good, man. It’s been definitely a struggle for me these last couple weeks. Starts haven’t been good and some bad decisions throughout the first laps I think. I didn’t play my cards right the last few weeks. But excited about today. The guys did a great job and it turned out to be a beautiful day and beautiful night for me. I didn’t get the greatest start but I just told myself to be patient because I think that’s what it was going to take this weekend, with the track being really rutted. The whoops were very challenging for us. The only triple that we had was pretty big for us also. Just put my head down and did my own laps. I was able to get around Shane [McElrath] and Malcolm [Stewart]. Obviously Jeremy [Martin] got around them and put a little pressure on me. I was just able to stay calm. Like I said, I did my own laps. I think Jeremy was a little quicker than me at the end. He was taking a different line from me. I think we all agree right now on the team, after looking at it, that line he had was the reason why he was catching me a little bit. But just glad overall about everything. The team’s been working really hard. We tried something new this weekend, something for the future.

Atlanta you led from the start. Is it a little more satisfying to win this way? You battled Malcolm. You battled McElrath. You held off J-Mart. Is that more satisfying?
Obviously Atlanta was great because I was able to just do my own thing and I was clear and I had a little bit of a distance. It definitely makes it challenging when you have to come from behind and pass people and cover your line. So with all the struggles that I’ve had, this win was definitely an awesome feeling. Super excited about next weekend and mixing it up with outdoors, now getting ready for it. Excited to get back home and train and get ready.

I feel like outdoors we haven’t seen you much. You’ve always had something go wrong. I can’t even think of how you normally do outdoors.
It’s been rough for me outdoors, especially with 2014 when I had my injury. That put me behind for a few years. I really want to focus this year on being consistent. Outdoors is brutal and it takes 24 motos. Just want to be consistent and have fun. That’s what I’m doing this year, just having fun. I think it’s paying off. We’ll see.

You have the points lead and you can’t even race a race. I’m sure that bummed you out a little bit, but were you able to stay somewhat level-headed considering how horrible that was?
Yeah, I did. At the end of the day, it was out of my control and there was nothing I could do. It’s just been disappointing the last few weeks after because I just wanted it so bad and I knew I had still a chance and I think I made a couple of dumb mistakes that didn’t play in my favor.

You were going for it?
Going for it. I had nothing to lose. I still knew I had a chance. I was thinking too much. Now the pressure was just off. It was disappointing to miss a race, especially having the red plate. Just excited to be back up top. That’s all that matters to me right now.

But you weren’t punching holes in the wall, screaming, during Toronto?
No. I feel like everything happens for a reason and it was out of my control. Nothing I could do about it. It was a hard hit. Put my head down and still trained and was able to recover for it.

Do you wish the bike thing you tried this weekend… are you like, “Man, I wish we had done that six weeks ago?”
I don’t think so because I think it’s a learning process. I think all the manufacturers develop throughout the season. You learn a lot with two rounds to go. Zach [Osborne] was able to test a lot through his West Coast rounds. I feel like everybody does that. I feel like everybody develops throughout the season and then you go into outdoors with new stuff also. So for us, Husqvarna, we have a new frame, new chassis, new everything, so it’s good, and we’re just learning to make it better all the time.