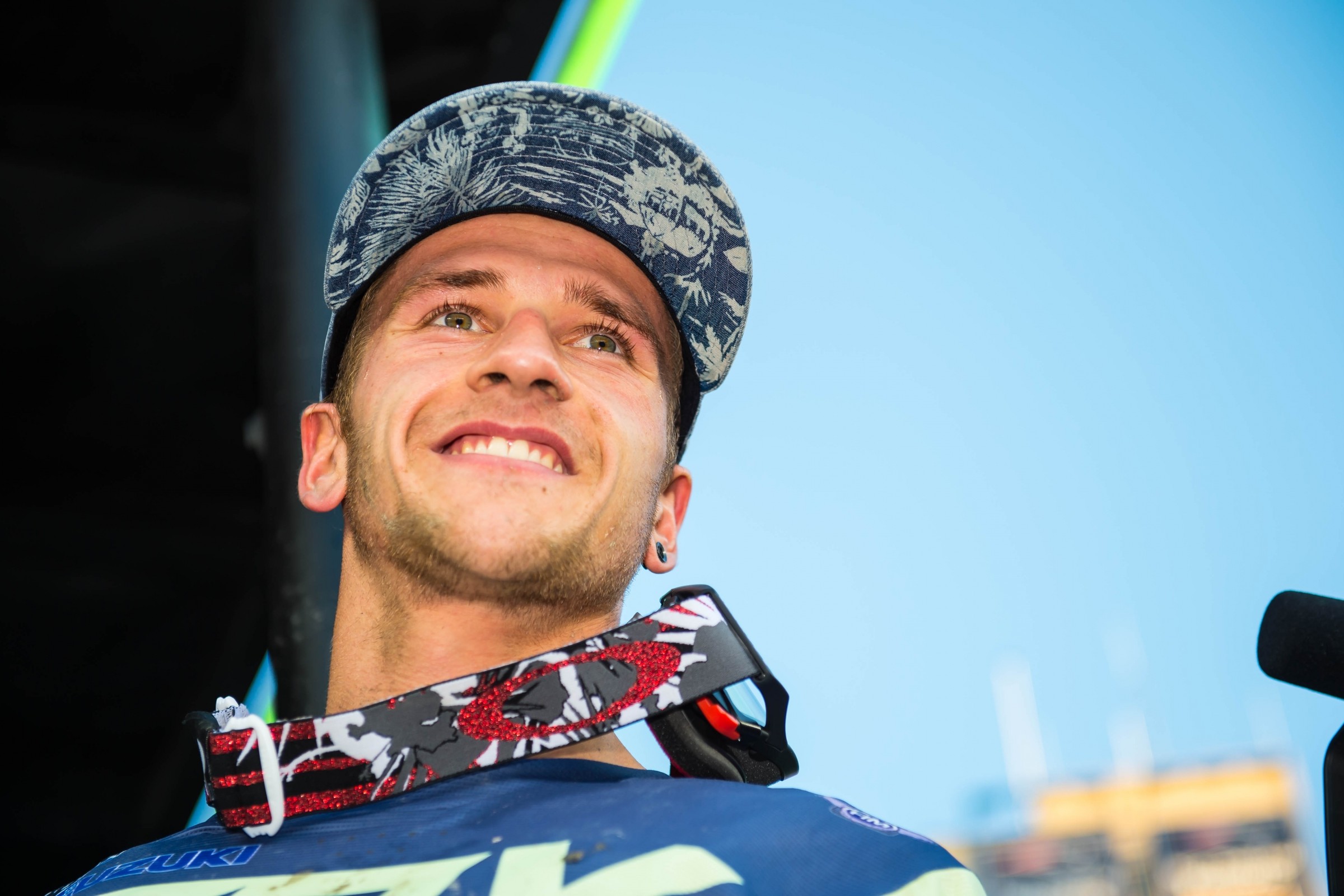 Soaring Eagle/Jimmy John’s/RCH Suzuki’s Ken Roczen has been on the gas the last few weeks, shadowing Ryan Dungey’s every move in the main events to collect three close second-place finishes. At the first-ever supercross in Gillette Stadium, Roczen finally ended that second-place streak with a victory, his fourth of the season.

But why weren’t we getting Roczen/Dungey battles like these earlier in the season? Kenny’s starting to regret not making his most recent round of bike changes earlier.

Racer X: How was it?
Ken Roczen: Tonight was awesome, I mean, literally when I landed and I saw the stadium I said, “This is going to be my new favorite place.” And then to top it off with a win is amazing. The track was tricky; you could see it had some good hard packed spots mixed with some ruts. Some of it was actually pretty tight, and the whoops got really rough. But I’ve been feeling good the last few weeks. I got a good start—well, I almost slid out in the first turn, but I felt great out there. I knew Eli [Tomac] was behind me but I was just trying to focus on not making any big mistakes, and not pushing too hard. Toward the end we got into some lappers and it really, really pissed me off. I’ve been yelling. There’s a hundred blue flags out there and they just don’t move out of the way. So it’s definitely disappointing. But anyway, no sense dragging myself down. But if you’re in a battle, stuff like that can really make a difference. Luckily we had a little bit of a gap and we could ride home with the win tonight.

Did the shadows that were coming into the stadium make it difficult?
Not in the main. I felt like in the heat race it was a lot worse. But now that the sun’s down it was perfect race conditions.

What about going from the mud in the morning to dry at night? Was it hard to get a setup?
No, I left my setup. That’s the kind of rider I am. I set my bike up to where I’m happy and I leave it the whole time. I wouldn’t have minded if it would have kept raining. I love the mud. But the track, I can’t believe how much it dried out. You can see how hard pack it is. The Dirt Wurx’s crew did an amazing job getting it dialed and making it good for racing for us.

You want to keep the pressure on him [Dungey] in points I’m sure.
Absolutely. A lot of things can happen. It’s not over until the fat lady sings. My plan was obviously win and drag it out another week or two. You never know what’s going to happen, so I’m just going to keep putting my head down and do all that I can just give it my all.

Was the bike change so crazy? Was it something you could have tried earlier or was it like a wacky thing that you would have never thought of?
No, it wasn’t. I don’t even know how we got lost in what we did. It’s absolutely nothing out of the box at all. It’s super plain and simple.

So you could have had this setup at Anaheim?
Absolutely. Sometimes you test things but it’s not necessarily the right time to test it, maybe track conditions are different, whatever it is. So we kind of got lost a little bit here. But I’m looking forward. All that matters is that we finally figured it out.

Is it sometimes tough having too many options?
It is, absolutely. It’s hard to drift away and try things. For the moment it feels good there. But a lot of the times you change to something and you think that it’s not that much better, but then you go back to what you had before. That’s when you really notice a difference. Sometimes just going one direction doesn’t cut it. It’s when you go back to what you had before that you really notice the change. Sometimes you have to go back to back.