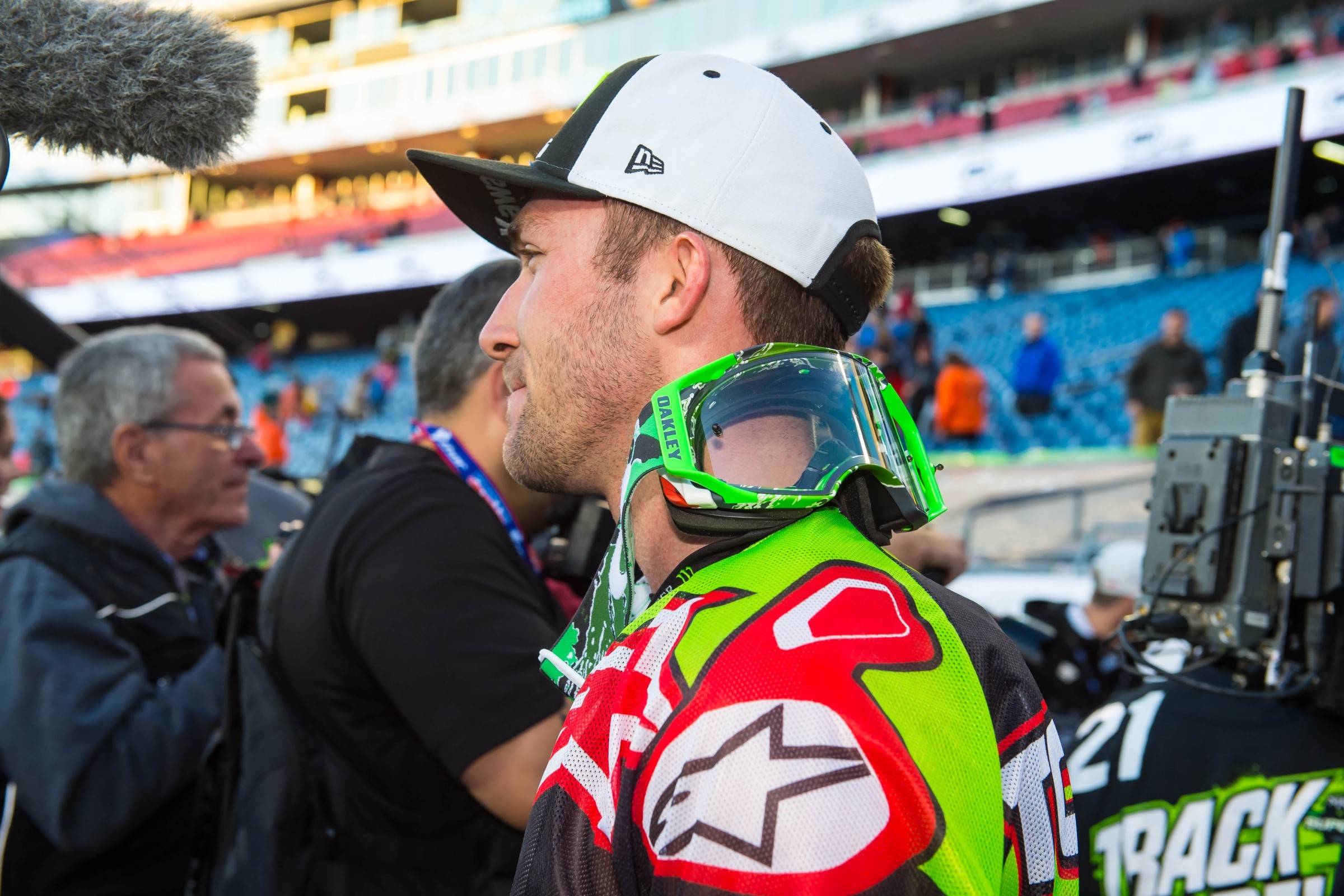 A few weeks ago it became official—this Monster Energy Supercross season has been a washout for Eli Tomac and Monster Energy Kawasaki. A win at Daytona looked like it could signal a turn around, but 5-5-7-9-7 finishes since have sent the team back to the drawing board. And since Eli was so strong in Lucas Oil Pro Motocross last year, and because he won on Daytona’s outdoor-style track, it was tempting to think he already had his focus on May 21 at Hangtown.

Not hardly. The championship is long gone but the Kawasaki folks are adamant that they’re not giving up on supercross, and it showed in Foxborough, where Eli rode arguably his best stadium-style race of the year with a solid second behind Ken Roczen. We talked to him about his bike changes and his focus after the race.

Racer X: We’ve seen some more speed the last couple weeks. What’s going on?
Eli Tomac: I don’t know. I guess Eli Tomac’s coming around a little bit. It’s been a building year for pretty much all parts of my program—my body, my motorcycle. Getting through the laps and just getting back in the groove I guess you could say. There were a lot of changes this year and now it feels like I can do what I’m supposed to and just go out there and ride. Tonight I was able to put myself in the position in the main, too. That’s huge coming out top five in that first corner.

Suspension has changed up over the last bit, I would guess.
Yeah, there were some big changes there a few weeks back. But at the same time I’ve kind of settled in on a base setting now. It’s the best I’ve had. I’ve been good in practice and been struggling a little bit in the heats, but at least I was able to put that main together.

It was a bummer at the start of the main last week.
Yeah. That was a bummer because I felt like I could have been in contention for the podium again there. I ran into the Tuff Blocks and ended up bending my shifter and went down. Actually had to ride the whole main event in second gear. That was another bad incident. The week before that I was in third; went over the bars in the ruts. Probably should have been another podium. Shoulda, coulda, woulda. So I felt like the past two weeks I’ve been kind of robbed from the podium.

What about today during practice when the bike just quit? Was there some frustration?
That was a bummer. We couldn’t get that thing fired again for the second practice because the track came around a lot. Those guys got an extra ten minutes and were nailing all the rhythms while I was sitting there scratching my head like, what am I going to do in those sections now? So I was down on some [practice] time for sure.

I think because the supercross thing has gotten so far out points-wise that everybody’s like, “Oh, Tomac’s just waiting until outdoors.” But you’re still obviously working at supercross. You’re not throwing in the towel.
We’re not throwing in the towel at all. I think I’m a plenty capable supercross rider, so no. We’re going to keep trying to improve so we can bring that right into next year. At the end of the day, everyone wants a championship. At this point, that’s next year. Always trying to improve, for sure.

So you didn’t change the schedule at all? You haven’t done any extra outdoors than you normally would?
No, we’ve done some outdoor testing and have started riding a coupe of days here and there, but we haven’t just totally given up on SX at all.

This season has been so bad that I can’t even say where I hit bottom. Maybe somewhere around Dallas or something where I just felt like I had nothing for the top guys.

You went through everything here. From mud to dust. I can’t think of a supercross that’s had as diverse a day.
I thought there was no way this dirt would come around the way it did! When we did track walk I thought it looked like the bottom of a dirty pond, like that nasty black clay. I was like, “There’s no way this stuff is going to dry out.” And it did. It got slick and hard pack and it came around.

I’ve never seen so much flat tracking too.
Yeah, this is like a full-blown dirt track right there. It was actually pretty fun, sliding it around right after the finish.

Did you think you had a shot at Kenny for a while? It looked like you were closing in and maybe even had some different lines and stuff?
Yeah, the first half I did. I was right there with him. I just didn’t quite have it. Just came a little bit off the pace and he kind of held that pace. So I’ve got to get better there.

Did I see one or two rough rides in the whoops? Is that what you got you a little bit?
A little bit of a yeehaw in the whoops once or twice, and then I kind of went into protection mode a little bit in there. But if you go look at those things right now I think it’s the nastiest set of whoops I’ve ever seen.

Everybody had problems.
It was the bad. The last five laps I was like doubling and singling. They were nasty!

You got your money’s worth.
Yeah, absolutely. Early on we were able to through them just fine, but they went away quick.

You won the first heat race of the year at Anaheim 1. Did you at that point think, “I know I started late and all that but we’re going to be good?” Or were you worried all season that this was going to take a process like it has actually been?
I never was really leaning either direction. I was just kind of, let’s see how this goes. I wish I was more in the series and the points and had a couple more wins but it is what it is now. At least we’re making improvements now and it’s not just going downhill more and more. We’re going back uphill now. It’s getting better.

Did you feel like you hit a bottom?
This season has been so bad that I can’t even say where I hit bottom. Maybe somewhere around Dallas or something where I just felt like I had nothing for the top guys. I would have it in the heat race and in the main event I would feel like a totally different guy.

Why is that? Because the track would change by the time the mains came around?
Yup. Track condition would go away. I would struggle when the track would deteriorate. And then when the track was perfectly prepped in the heat races I could just let it hang and go wherever I wanted. But when I had to start picking and choosing lines, that’s where I was struggling.

I feel like we’re seeing more and more of these little changes in bike setup making a huge difference. Ken Roczen just said the same thing. I don’t feel like ten years ago you’d have a guy who could kill a heat race and then the track change made that much of a difference. It seems like we’re seeing more small, tiny things like that make a big difference.
It does, but I think you can find a sweet spot. It took me a while to find a good base.

So when you won the heat race at Anaheim 1 you weren’t like, this is it, we got it?
I honestly had no idea what to expect at that point.

Is it some of you figuring out the team, the team figuring out you?
Yeah, I would say so. It’s just a building process.