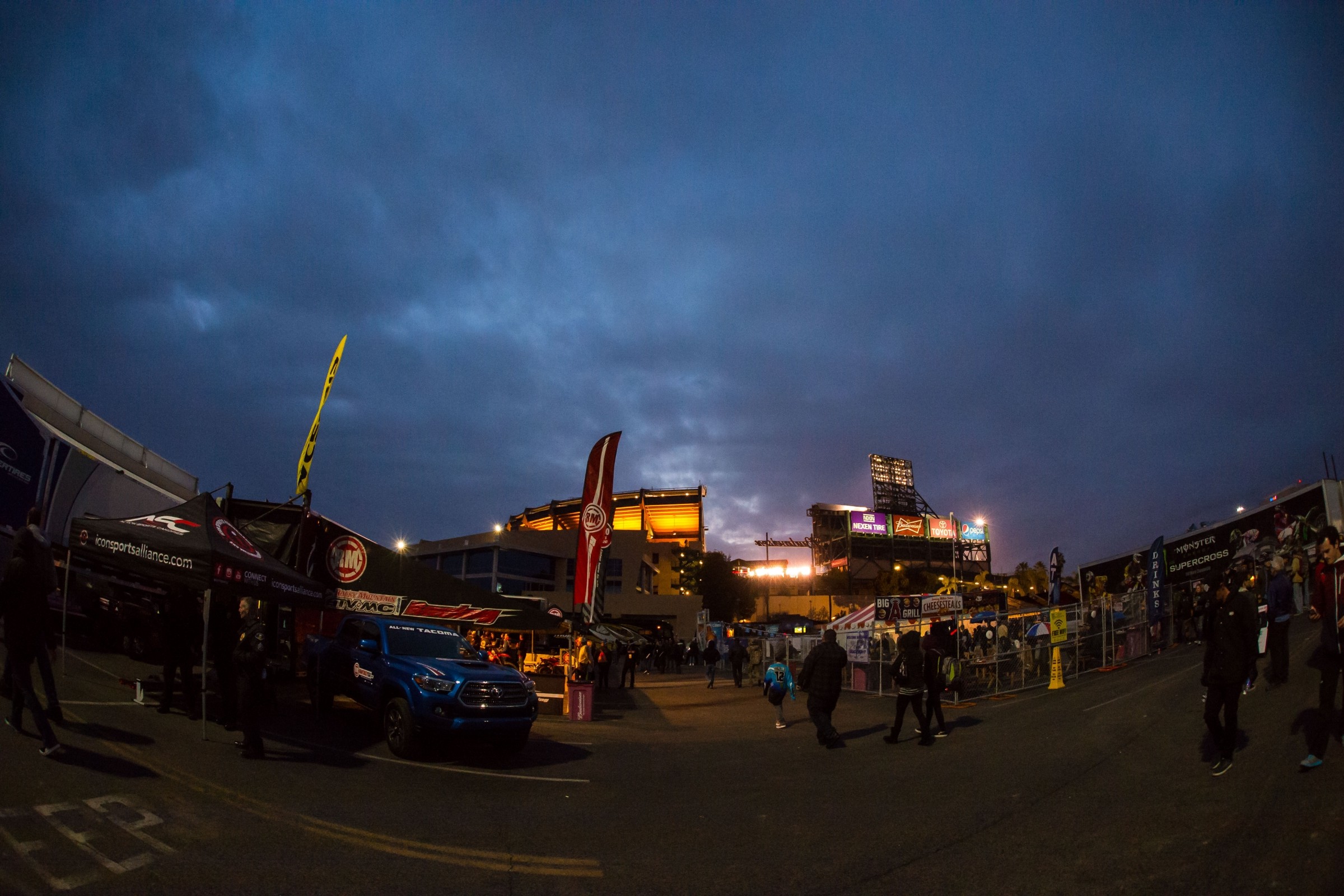 Between Chasing the Dream

Monster Energy Supercross’ Chasing the Dream series has been a big hit this year, going deeper behind the scenes than ever with the riders, teams and families of the sport. Two of the four episodes are complete, with episode three premiering this Sunday at 3:30 EST on FS1.

We called the shows producers, Doug Cabrera and Luke Parmeter, to get an idea of how and why they get such good access to the stuff you don’t normally see.

Racer X: Okay, Doug, lets start here: explain to everyone what the Chasing the Dream series really is.
Doug Cabrera: Chasing the Dream is exactly what it says—we’re trying to capture what the riders go through to try to win the Monster Energy Supercross Championship. That’s the goal, that’s the dream. So it’s the emotional highs and lows, the interaction with everyone in their circle and on their team, and even the other riders. It’s a journey, and sometimes it comes out great, and sometimes they get frustrated with how things go on the track. And obviously we want to showcase how exciting and entertaining the sport is. We want people to get to know the riders and their personalities more. It’s hard to get all of that on the live TV broadcast where you’re trying to show all the races.

And that’s the thing that will surprise people who watch this. You’d think if you watch the races on TV, you read our website, you follow everyone on Twitter and Instagram, you’re going to get everything. But you folks are getting some really unique stuff on these shows! Do they just forget you’re there? How do you get it?
Luke Parmeter: I think it helps that all of us have been in this industry a long time, so there’s a lot of trust. We know the sport, we know the guys, we know when to give them space, and we also know their personalities, so we know what to look for. I think the hardest part is breaking down that barrier, but that’s all been done with our past.

Doug: Yeah, and any time I set up something with the teams, I always tell them if they ever want the camera to be turned off, just tell us. I also tell them we’re not trying to be TMZ and get gossip here. If something happens it’s because it really happened, but not because we tried to build something up.

Good point, Luke. This isn’t some corporate Fox Sports team. You guys are moto guys. I’m joking with Wes Williams every weekend, I can’t believe I see this dude who used to run around Loretta’s with a towel under his baseball cap now at supercross wearing a collared shirt, shooting for Fox Sports!
Luke: [Laughs] Yeah, well Wes Williams is kind of the Godfather of motorcycle filming like this. He actually got me my start in 2010. Matt Francis has been around a long time. He used to work with you guys at Racer X. Jason Monroe, Stephen Erikson and Anthony Flores, our audio guy, they’re just so passionate about this. Also big thanks to Shea Murphy, the Two-Wheeled Project Manager at Feld, she helps us coordinate a lot of the interviews. This crew is always willing to come early and work late because we love what we do.

Doug: I also want to mention Chase Stallo, from your website. He’s our writer and he’s doing great work for us. Just a lot of people who know the sport and the riders really well.

Yeah, and you have to know what you’re looking for before you can get it.
Doug: Right. And it does help to know these guys so well. We wanted to have an interview with Chad Reed, and he gave us an hour and a half at Anaheim 2. I just went right down memory lane, and he enjoyed that, but I was able to do that because I’ve been there since he came here to the U.S. in the 125 class on a Yamaha. I remember specific things to ask about. We did the same thing with James Stewart at his house, and Luke will probably agree, James was smiling ear to ear when we brought up some old memories. Some of that footage is yet to be released, but we have great stuff.

So a new episode is coming this weekend?
Doug: Yeah, Sunday at 3:30 Eastern on Fox Sports 1.

And I hear you folks have actually unearthed the rare gem here—you have footage of the Cole Seely/Jason Anderson dust up at Atlanta? No one has seen this, but you have it.
Doug: Yes, we do have it and you will see it. Again, we’re not trying to start controversy, but you will see what went down. Cole Seely wasn’t too happy and Jason Anderson wasn’t too happy. Lot of emotion going on back there in the pits, and the fans will get an idea. But that was one of those incidents where the teams did tell us to turn the camera off after a while, and we did that. They were heated at the time and I think they’ve both cooled off. The thing I think we’ve all learned is this process is that all these storylines happen in the pits. You’d think everything happens on the track. But we leave a crew back in the pits and that’s where we get what we call gold. At the beginning of this next show, you’re going to see something that happened between Weston Peick and [JGR team manager] Jeremy Albrecht. It was very emotional and very intense, Peick is trying to plead his case, Buddy Antunez, his riding coach, is there, a lot is going on. This is what we get in the pits.

Everyone always seems so polished on the podium. I’ve spent a lot of time at races but even I’m surprised this much stuff goes down in the pits!
Luke: Yeah, and again a lot of that is our crew. Our audio guy getting them mic’d up so we can get this. It’s worked out great.

Doug: Yeah, you’re right, Jason, you and I have been around a long time and even I was surprised some of the stuff we were getting from the pits! When I watch the main event now, I’m kind of like, “I wish I could be back in the pits right now!”

Another thing you’ve been able to dig into is the work during the week. You’ve shot at Baker’s Factory, shot at James Stewart’s house. And again, these riders are open to it.
Luke: Yes. We’ve been to Aldon Baker’s, we’ve been to JGR, and we just try to be a fly on the wall. It’s awesome to see that—those boot camps are so intense. I think the riders want people to see it so the world gets to see what level of athletes they really are.

Doug: What we enjoyed a lot about that is getting them in a much more relaxed environment. Much different than the race track. We just throw a mic on them, and whether it’s Malcolm and James, or Dungey and Musquin, it’s like two buddies hanging out.

You’ve also mic’d up people during the race. You had Ellie Reed cheering from the stands earlier in the season.
Doug: What’s cool with Ellie was that was the same weekend I had that great interview with Chad. I was just getting a quick sound byte from Ellie in the pits, then I asked if she would mind if we put a mic on her. She didn’t mind at all. And once we saw what we got from her, Luke and I realized that’s something we need to do more often.

You also had Stewart coming in and debriefing with his mechanic and team during practice, and in the pits. He’s literally talking about his forks. We don’t hear that stuff very often.
Luke: That was Oakland. One thing to mention is it looks like we’re right there, but we’re not standing as close as it looks. Sometimes I think they forget they’re there. We try to respect their space and not mess with their routine—and again we have guys who know the sport so they know how to shoot this without getting too close to them.

Doug: You’d be surprised how far away we are, and our audio guy is great, he just uses that boom mic. We also tell the teams the game plan well before the weekend, so they know what to expect. The first time we did this was at Monster Energy Cup, and the first person we did it with was James. We got great access, and Mike Webb was cool with it, James was cool with it.

What else will we see this weekend?
Luke: We follow Eli Tomac during the second San Diego Supercross, and we kind of recap his season, from all the hype of the brand switch, to exploring some of the struggles that he’s going through. I don’t want to give away too much, but there were a lot of highs and lows during that day we followed him around.

Doug: Another thing we enjoyed was following the Honda boys around when they visited people at a hospital. We want to show everyone what good guys these riders can be away from the track.

Doug, how long have you been at this? I remember you starting with the old Bar to Bar Series, which was great for its time.
Doug: Yeah and it’s funny to think back. When I started the whole Bar to Bar [SX season review] thing it was before DVDs. This was VHS! I would come home with so much content and I would only get to use a third of it. So I think about all of this old stuff and maybe someday we can show that somewhere. But from where it was then to where it is now, I could only have dreamed it would become something like this. I did kind of test the waters back then. I have footage of Ezra Lusk and Mike Gosselaar on the line, mic’d up. I have footage of Jeff Emig clinching the title in 1997, and we have Albrecht mic’d up, and I have the whole celebration and everything. I kind of tested the waters, but now we have the right people in place to do it so much better.

So did this stuff ever see the light of day?
Doug: A little bit, but the Bar to Bar series we were still showing a lot of the races, and I was still learning my way. With Emig and Albrecht, we probably showed 12 seconds of the whole celebration. Now, we’re just showing a little bit of the races, and we’re much more focused on the personalities and the people and their interactions.

Let’s be honest: you’re talking 1997. The term reality TV didn’t even exist yet!
Doug: [Laughs] Yeah, that’s a really good point! Hey, one other thing to add for this weekend, we’re going to live tweet during this airing of the Chasing the Dream show this weekend. So @supercrosslive will be shooting out tweets during the show, and Luke and I will be giving even more behind the scenes info with what we saw and what happened while we were shooting this. Just something else to add to the show. We’re really happy with how this has come along, and we think people will like it.