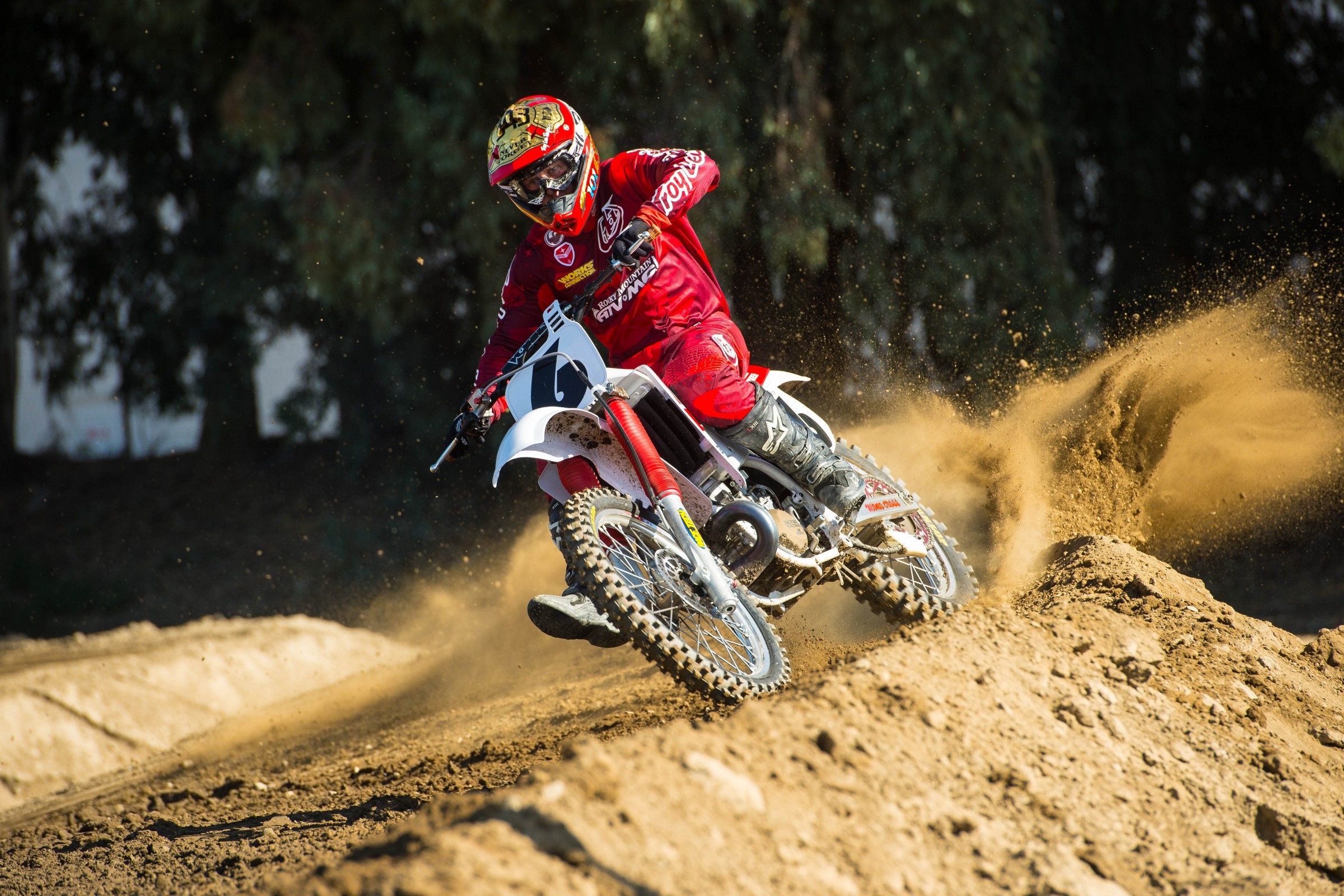 With all of the emphasis on cycling and rowing for training recently, I would expect to see guys warming up on stationary bikes in the pits prior to their heat race and main.  Instead, it seems like the 450 guys on the broadcast will be standing around doing interviews in their street clothes while the 250s are running.  Is this a gap in race preparation, or are there secret cross fit regimens happening inside the semi-trucks?

I think what you’re seeing on television is a pre-recorded because when the 250’s are running the 450 riders are literally getting lined up in the tunnel and starting to prep their gates. If you look in most pit areas you will see bicycles or rowers and most riders utilize those tools to warm up. Some riders just spin until they work up a sweat while other riders do different movements and exercises to get their balance and reflexes firing as well. Warm up is something that has really come a long way. Twenty years ago riders would hop around a little bit in the tunnel and maybe swing their arms in a circle a few times. These days trainers are making sure their riders are at running temperature and ready to go 100mph right from the gate drop.

With the ongoing frustration with whoop flattening, is there not a way to simply build and transfer modular whoops that were maintenance free? They could use some form of rubberized material, and have a number of different face angles and block heights for variation week to week. They could even pre-form some rut variations in the tops or create lateral slopes. This way you could have a wide variety of heights, shapes and spacing week to week but once set up they would be the same for the night.

It would likely mean another rig to move gear the but set-up and maintenance reduction time would more than cover that. Not the purist of solutions, but better than flat whoops!

This has been discussed in the past and I think it could be a viable option. The problem is that I’m not sure what materials could hold up to the abuse that these would be subjected to over the course of a 17 round series. Also, you have no flexibility in terms of the height or pitch once they are built. I have long argued that whoops need to be bigger and they need to put them right out of a corner. That way, riders are forced outside to build speed [leaving the inside open for passing] and they won’t be able to hit them with a lot of speed, which would keep injuries down if/when riders crashed. Right now they often build a set right after the landing of a triple or jump combos and guys are in fourth gear with a bunch of speed behind them. For instance, last weekend in Santa Clara they had a large set right after the finish line that almost killed some riders. I saw Chris Aldredge drop his front wheel and get flung into the dirt like a stubborn booger finally letting go of your finger. Thankfully he wasn’t hurt badly but it’s only a matter of time when guys hit the deck at those speeds. So, if you built a big set of artificial whoops and then set them up after the landing of a triple you could get some guys in trouble. I’d love to see them build a set and use them at the Monster Cup in October. That race is the perfect place to try something unique like that.

You have answered a few of my questions in “Ask Ping,” and I get a kick out of how you always disagree with my question/statement. So here’s some more ammo for you because I’m sure we won’t see eye to eye on this either.

Before Villopoto decided to race MXGP, I admit I really didn’t know who any of those riders were. Since I am a fan of his, I decided I would upgrade my DirecTV package so I could watch him. Even after he dropped out of the series I kept watching because I have to say those guys are awesome. It pains me to say this, but I think there are more, better riders in that series. The last 450 race in Valkenswaard was epic. You don’t see four guys battle it out in a whole moto here in the U.S. I think we, (the U.S.), need to show these guys what’s up. So here is my question. Why don’t the factory teams here show up at the MXGP races when they are right here in America? This series is coming here for two rounds this year. All of our race teams and riders should be there racing. These rounds are even at the end of the Nationals so there is no scheduling conflict. Ok. There you go. Fire away!

Jeff, you ignorant slut. You’ve had so many bad ideas and questions that I don’t think you’d know a good one if it took a dump on your chest.

Nah, I’m just kidding; I just didn’t want to disappoint since you enjoy the back-and-forth. Actually, you aren’t that far off-base. I mean, you’re wrong, of course, but maybe not by much. The thing that we need to grasp is that you can’t really say that we are better or they are better…The two series are so different that it’s almost like different disciplines. Their champion isn’t going to come over here and win nationals right away, the same way that RV couldn’t go over and clean house there. After some time and adjustment they can be competitive, as many foreigners that have come here have proven.

The reason our guys don’t show up to those events in the US is there isn’t one dollar in it for them. Zero. There is no purse money in GP racing. Team budgets here are set around the 29 AMA-sanctioned races, only, so the teams don’t want to pony up extra dollars beyond that, too. They aren’t trying to earn points so it becomes a matter of pride and, really, they don’t care. If they win, people expect them to win. If they don’t win then they let their country down. Add to that the already brutal schedule these guys follow and the practically non-existent off season and it just doesn’t make sense. Even the Motocross of Nations makes no sense from a professional standpoint, it’s purely for pride; I wouldn’t blame Dungey if he never goes again. I’m sure you’ll see a few guys show up when the GP’s come stateside but don’t count on all the major players to spend one of their weekends off working for free to make Giuseppe more money.