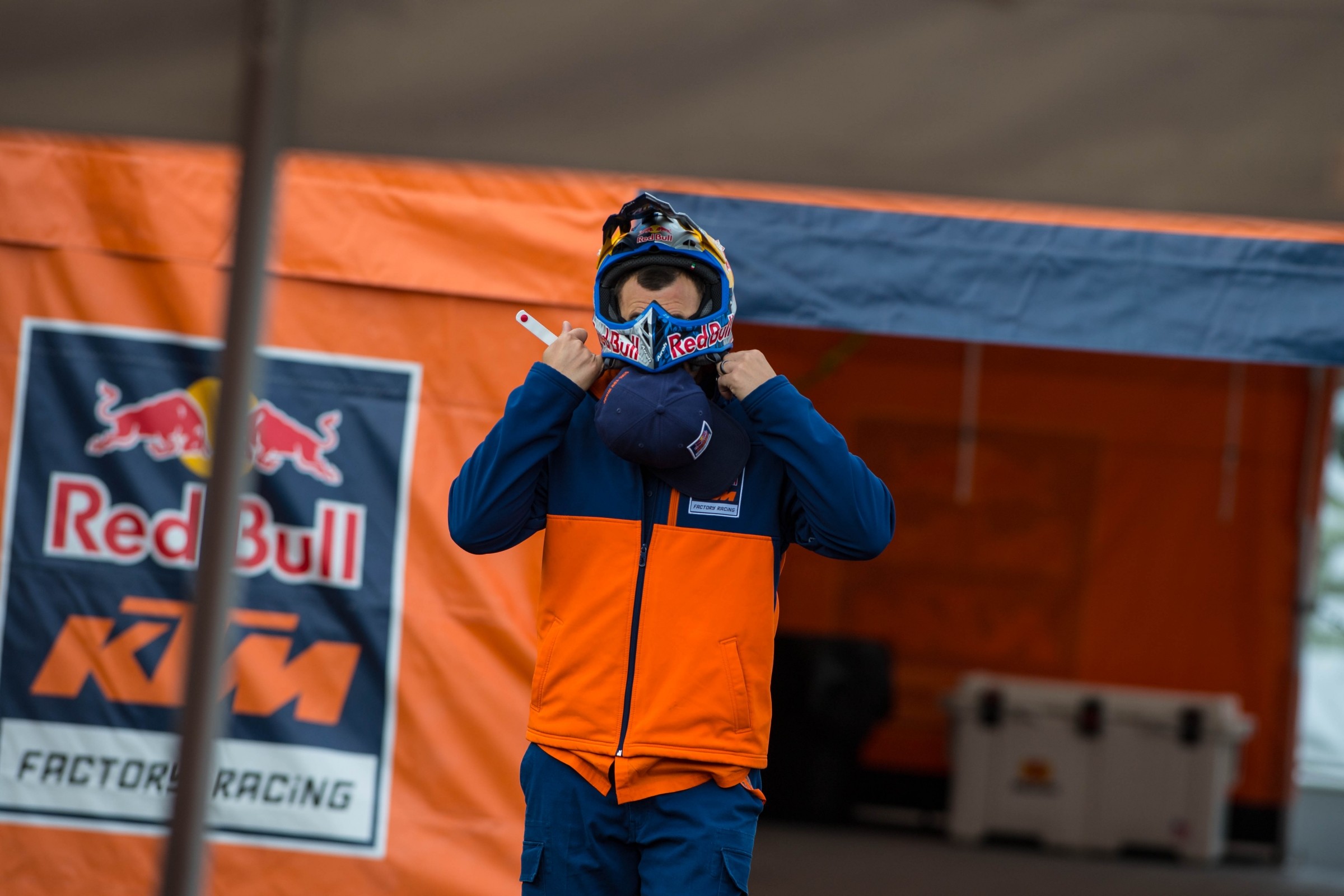 Remember Guy Martin? The mad man we told you about last week that set the world record for speed on the Wall of Death when he hit 78.15 mph in his second run. Well, he’s back—and this time taking on an F1 car. Recently, Martin and his Tyco BMW Superbike went head-to-head with David Coulthard and a Red Bull RB8 Formula 1 car. The two competed in a drag race, a brake test, a slalom and a circuit race. We found the race and the pit stop challenge videos here. Who you got?

Using a DJI Osmo stabilized camera (which you can get here for a cool $569) Rufus Blackwell made this amazing hyperlapse video riding through the streets of Saigon, which is located in southern Vietnam and known for its French colonial architecture. 'Nam, bro.

Speaking of riding in Vietnam: In the March 2016 issue of Racer X Illustrated, Nate Zoller takes an incredible, two day, 400 mile journey through northern Vietnam on a Russian Ural. Pick up the issue here and read about his journey starting on page 136.

At the recent GT Tour race at France's Nogaro Circuit, Sacha Bottemanne was battling with a fellow Ferrari driver when he lost control and slammed straight into a wall at full speed. It was a violent crash and fortunately one that Bottemanne was able to walk away from.

This is from January, but whatever, it’s still cool. Red Bull sent Scuderia Toro Rosso driver Max Verstappen to the Austrian Alps to perform a unique F1 show—at a Effing ski resort! I would say unique is an understatement—for the Hahnenkamm Festival. Below is some onboard footage; you can watch the entire thing on Red Bull TV.

I don’t know much about drag bike racing (if that’s even what it’s called) but I’m fairly certain this isn’t how it works.

Turbo Drag Bike 70 Foot Backflip at the Twist of the Throttle. They build them tough as Comp Bike Champion, Brett Ghedina, walks away from this launch gone wrong on his 7.7-second drag bike: "That's not what its supposed to do."

Earlier this week, the NFL and Twitter announced that the social media company would stream 10 regular-season, Thursday night NFL games for FREE (!!!) in 2016. How did Twitter outbid companies like Facebook and Yahoo? According to Slate, it didn’t. Sources told Slate that Twitter’s bid was less than $10 million, while others may have bid upward of $15 million. Then why would the NFL go with Twitter, who has around 300 million active users instead of Facebook, who boasts around 1.5 billion active users? There are a few reasons, but one was apparently advertising.

If it’s true that Twitter won with a significantly lower bid, however, that implies that the NFL had other reasons for preferring Twitter as a streaming partner. My source said one reason was indeed that Twitter was more flexible as to the NFL’s advertising requirements. I’m told that CBS and NBC will retain the rights to sell the majority of the ad slots on the simulcast, with Twitter selling perhaps the remaining 20 percent or so. That's a big reason why these rights cost so much less than the ones Yahoo purchased to live-stream a single regular-season game in 2015.

Lewis Hamilton, the reigning Formula One champion, is a big fan of MotoGP racing. In March, he told AutoSport that "MotoGP is just so cool, much more exciting to watch [over Formula One], I would say, just because it's closer racing. I really need to try a MotoGP bike. I'm dying to at least get on the back of one.” It appears Hamilton may get his wish, as Mercedes F1 boss Toto Wolff told La Gazzetta dello Sport: "It would not be a problem for us if [Hamilton] wanted to do it. On the contrary, it's a fun idea. Besides, I think he has already ridden a motorcycle in the past." With that in mind, here’s Hamilton reving a MotoGP bike:

At the second round of the MotoGP Championship last week in Argentina, rumors of Jorge Lorenzo switching from Yamaha to Ducati began to heat up. Today, Motorcyclenews.com is reporting that it’s a done deal.

MCN understands that the move, which has been speculated about for weeks, is now believed to be a verbally done deal and there will be an official announcement of the tie-up between the three-time MotoGP champion and the Italian manufacturer when the championship returns to Europe at Jerez in three weeks time.

Of course Ducati is denying this, because, well, contracts and such. From Crash.net:

But speaking in the paddock on Sunday evening, Ducati Corse Sporting Director Paolo Ciabatti insisted it was too early to decide on the team's 2017 riders - while admitting 'everyone is talking' and pointing out that Lorenzo is not the only MotoGP champion still available...

“We make no secret about knowing that both Marquez and Lorenzo have contracts that expire at the end of this season,” Ciabatti stated. “We have been looking into the possibilities and talking to our riders. Other teams are also talking to our riders. It's quite normal at the moment. Obviously we wouldn't be doing our job properly if we didn't look into the possibilities.

The defending MotoGP Champion (Lorenzo) crashed out in Argentina and handed the points lead to Marc Marquez. The series heads to America for the first, and only (no Indy this year, bummer!) time this year, this weekend at Circuit of the Americas in Austin, Texas. Get those MotoDynasty Fantasy picks in before the race.

Full throttle!We got a behind the scenes look at everything it takes to get a team ready for Supercross . We talked with Pat Houlihan from Monster Energy Kawasaki USA Racing Team. He took us inside the team's 18 wheeler. This is the coolest secret clubhouse I've ever been invited into. Every tool imaginable, enough spare parts to build 3 bikes from the ground up, a war room, and a riders lounge. As soon as I heard about that riders lounge I knew that was were I'd be chilling until our next report. I tried to walk off with a couple of team jerseys for me and my photographer Jorge Bustos KTVU, but they caught up to me. Thanks to Pat for showing us around, and the team for a peek behind the scenes.

As we speak, I’m sure Steve Matthes is somewhere fawning over the SummerCross trophy that he and Tim Ferry won together. But instead of holding on to a “trophy” won over a century ago (okay, it probably wasn’t that long) Matthes should turn his focus to this KILLER SECTION from Ferry’s pad that Ken Roczen was hitting this week. Look at this thing—it’s beautiful, man.

fun section out at Tim Ferry's

Pass of the Year?

Not motorsport, but probably the best overtaking move ever!

This was a pretty slick pass by Chaz Davies on Thom Sykes a the WorldSBK event at Aragon.

We got a note on Twitter today directing us to highlights from the third round of the 2016 Kenya Motorsport Championship at Jamhuri Park, and it’s pretty awesome. Sure, these guys aren’t Ryan Dungey, but watching the sport grow and seeing how other countries participate is fantastic.