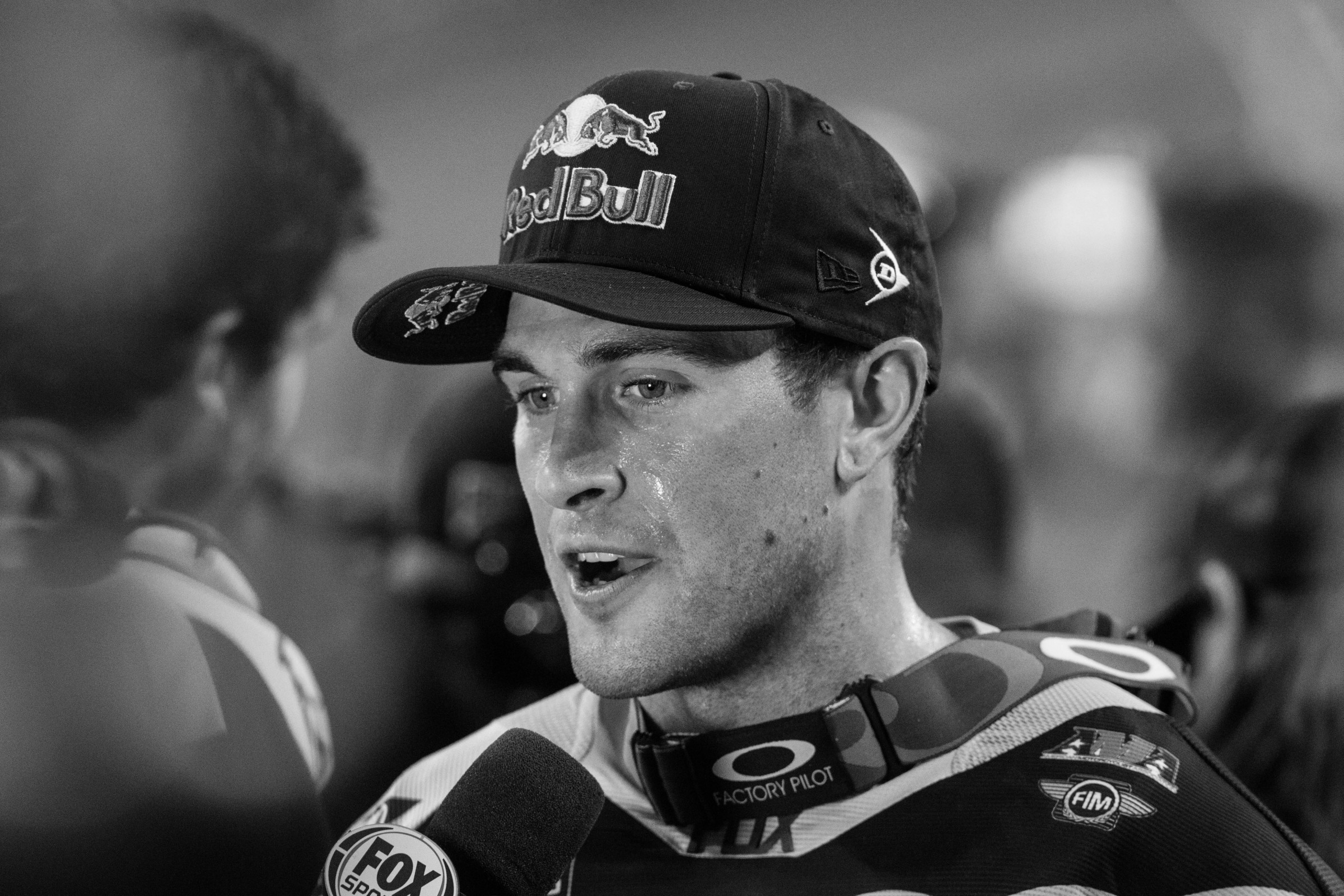 On Tuesday night, we spoke with the AMA’s Kevin Crowther about the two-position penalty imposed on Ryan Dungey after last Saturday’s Monster Energy Supercross round in Detroit. (You can read what Crowther had to say here.) Earlier this morning, we talked with Ryan Dungey to get his thoughts as well.

Racer X: Hey, Ryan. First thing is—what’s even the process? How did you even find out? I guess at one point it was just a normal podium procedure.
Ryan Dungey: Obviously I’m on the podium and taking pictures and everything like that, like normal. I was getting ready to go and walk up the tunnel, and that’s when Roger [DeCoster] said he got a call, and we had to have a meeting at the AMA rig. I kind of knew what it would be about. As we were going through the podium speeches and talking to them, the AMA officials were like, “We understand, we get it.” Then we had to go to the rig and that’s where we got to discuss the whole situation. From my understanding it was brought to their attention by someone—I’m not sure by who. All they would kind of tell us is that it was brought to their attention. And that seemed to be the way things were going, you know?

The racing scenario was, I was in the lead, I was going through the last rhythm section before you turn and go to the finish line, and I could see that [Jake] Weimer was in the middle of the lanes [off the track.] So my instinct was, the track is clear, the rider is in the middle lane, we’re good, you know? That’s kind of all I looked at. I didn’t see any flags at the time, although there was a flag out. The thing that made it tough for me was, my line was outside. I kind of carried my speed through the whole corner, so by the time I came out of the corner to single onto the tabletop, I had already committed off the jump, and then I saw something in the corner of my eye. I was like “Man, what was that?” It wasn’t really visible, so I went over the finish line jump and I looked back, and I saw the red cross flag waving. That was tough, because in the corner I didn’t see it.

So when I went over the finish line I didn’t know what to do—I even slowed down a little bit. Then I just thought I needed to focus on finishing the race and we’ll talk about it when it’s done. The hard part was, [they said] you jumped on the cross flag. But my line was different; I didn’t see the flag. The guys behind us, second through fifth, they saw it, but their lines were different, they were more inside and the flag was more visible to them. That’s just the scenario there. But, my thing was, the rider was off the track, to me there shouldn’t have been a red cross flag out at that point. The rider was in the middle of the lanes, off the track, and the red cross flag wasn’t in the middle of the track, covering someone like it was a serious situation. So the rider’s instinct is to tell if the track is clear, first, then you look for the flag. And I didn’t see the flag.

So that’s where the docking of two positions came from. I really felt like it wasn’t intentional, and I really think the decision was harsh. I had like an eight or nine-second lead, and it’s not like I gained a clear advantage, or if the rider was in the center of the track and in real danger. Just being docked a few seconds, I would have understood that. I think there should have been a provision just based on the conditions of what happened—it was a very big mix-up.

I don’t want to call anyone out and say they weren’t doing their job. Everyone is doing the best they can. But the way it all works out, I felt the decision was harsh. Especially, I went back and watched the whole race when I got home, and I’m watching the heat race, and Josh Grant and Jason Anderson—not calling out anyone, I’m just pointing this out. I understand, it’s hard to make a call as an official, it’s hard to make these decisions, but I feel like there needs to be more consistency with the penalty. Some riders posted it on their Instagram. It was that whole rhythm lane right after the whoops, they doubled through that, and there was a rider down on the middle of the two jumps, and the two riders who were side by side still didn’t roll, they just cased it, they cased the next one. Not wheels on the ground. Their situation was way more dangerous than mine, in my opinion. The rider was off the track in my scenario, the rider was still on the track with them. I watched that whole thing and no one got docked. Then the guys behind me [in the main event], they didn’t do the jump but they didn’t keep their wheels on the ground either. I’m the only guy being penalized out of this whole thing, and it was confusing to me. I just feel like we need to do a better job with being consistent.

Roger was quoted after the race saying it was hard for you to see the flag.
Yeah, coming into the corner, I saw no flag. You have to understand, you’re in a race situation and you’re focused, it’s high pressure. That’s a lot to take on. I’m coming into that corner and I don’t see any flags. I would have thought it should have been waving as I came into that corner. Well, he started waving it as I was already going through the corner, and where the top of my head was in that line, I couldn’t see. I was already committed to going over the jump. In my peripheral I saw something, but I didn’t know what it was. Again, not to call anyone out, but I don’t think the guy waving the flag was doing a great job of bringing to our attention a red cross flag like that. Maybe the other guys saw it, but they had more visibility because of the line they took in that corner.

So did you penalized for jumping into the turn, or coming out of the turn?
I wasn’t supposed to jump coming out of the turn. So what I’m saying is, I think a flag should have been waving as I was coming into that turn. In that scenario, I know they were saying the medical crew was trying to get across to the other side. It was Weimer who had crashed. He was able to get back on his bike—and I’m glad, I’m glad no one was seriously hurt. I saw him getting back onto his bike. There are a lot of things I don’t know about, so I don’t know why he was still waving his flag.

So I’m sure you said all of this stuff after the race? Do you just have to agree to disagree? Because they say they have footage.
Yeah, that’s the thing, I told them what I thought, and I really think they need to reevaluate this situation. I feel like I had to suffer the consequences because someone else wasn’t doing their job right and waving the flag the right way. But I don’t want this to be me calling someone out—everyone has their opinion. I just don’t want this to happen again. I don’t know whatever it is we need to do—maybe the team managers get together and have a meeting to discuss this. Because this is like the third time this has happened this year, and every time the rider is like, “How can you dock me for this?” That’s what I was saying, too. I was saying, “How could this be my fault?” But their decision was made up and there was no going back. That was hard for me. Everyone has so much invested in this—your team, your people—for a decision to be made so quickly, and for something like this to happen, there’s just too much invested in this by all of us. So, like I said, maybe the team managers can get together with the AMA and figure out a better way to handle those situations.

I was also frustrated, too, by this: In their truck I told them what I thought happened. I told them the truth. I have a conscience, I would never lie, and God knows what’s true in your heart, lying isn’t going to get you anywhere. So I tell them what I believe is true, I go back to my bus, I take a quick shower—they told me they would come and tell me when they made a decision, but by the time I got out of the shower and was dressed, the decision had already been made. So then there was no chance to talk about it again or appeal or anything. It should have accounted for more people—there just were too few people to make a decision like this. And just be more consistent. They brought up Jason [Anderson] getting docked two positions in San Diego, they said after they did that to him they would have to also do that here. But what about the heat race? No one was docked there. So, while they wanted to be consistent, they didn’t realize they were being inconsistent.

What I think this shows is, I think you’re so consistent, people sometimes get confused. I’ve been to a lot of your races. I don’t recall seeing you get second or third too many times and being really happy with it. You want to win—you don’t want thirds. This one hurt.
Absolutely. And you have to know that any rider, any team manager, anyone, everyone knows a win is a tough thing to do. To get a win is big! It’s something to really celebrate. Second or third is good, too, but you have to understand that manufacturers don’t pay us to get second, third and fourth—they pay you to get the job done and win. I don’t put in all of this effort to get second. So it was just hard to get a win shifted away from you because the situation like that, and it was harsh.

You know what? At this point life goes on, you move on. I don’t want to develop bitterness about the situation. I just want it to be handled better if it happens again to myself or anyone else. But I’ve moved past it—you’ve got to.