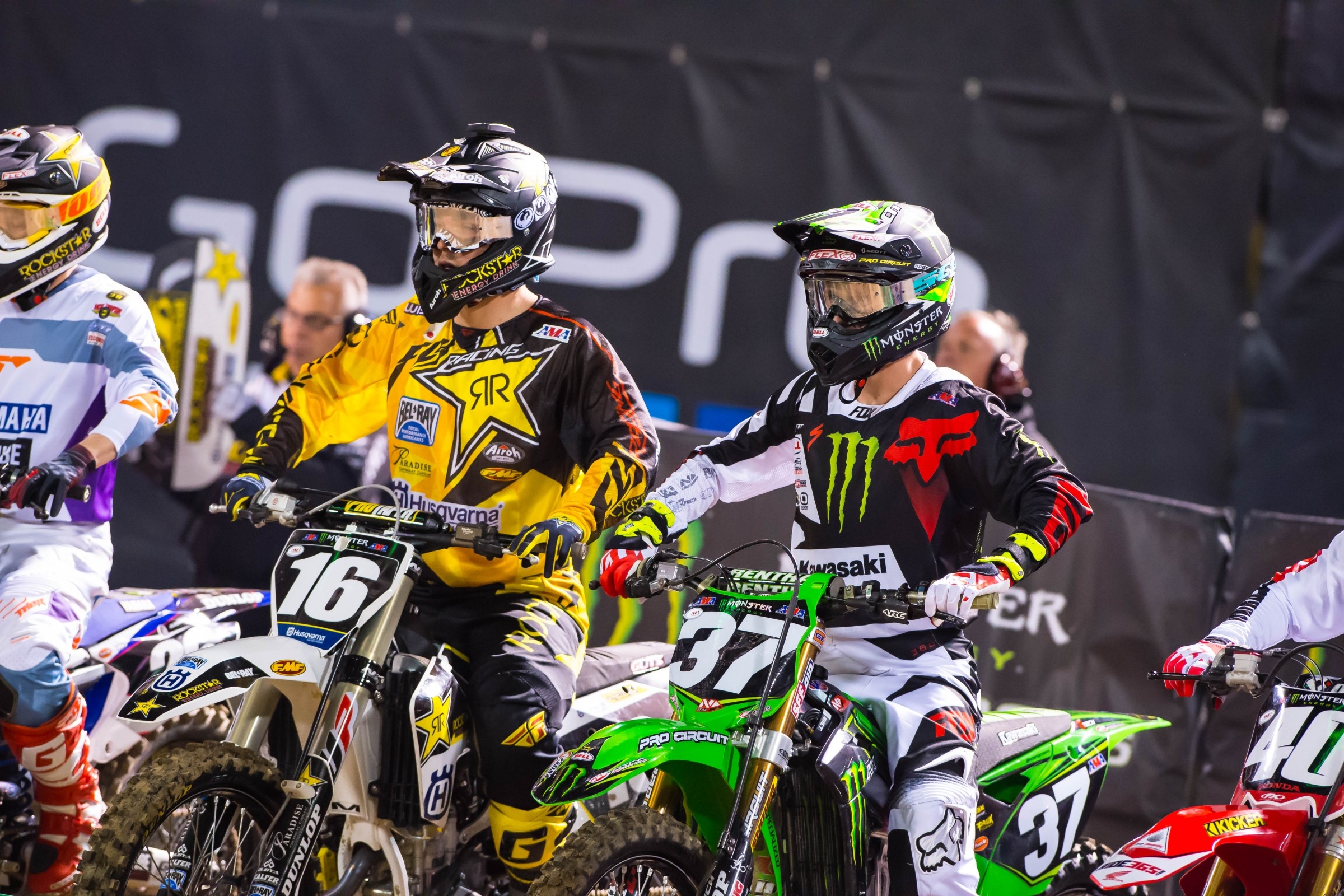 Bench Racing Ammo Pointing Out of the 250s

At the close of each season of Monster Energy Supercross there are almost always several 250SX riders who find themselves on the 450SX side of the pointing out rule—a rule designed to limit the amount of time successful 250SX riders can spend in the class. It’s a situation we keep track of with this annual column on pointing out. We usually run it closer to the end of the year when we have a better idea of who’s getting bounced like a guy who’s had too many, but this season we don’t have to wait—we literally know almost exactly what will happen. After you read the rest of this, you will too.

First, let’s explain the pointing out rules. Here’s the first:

Effective with the 2007 season points[points earned in 2006 and before are irrelevant], riders earning at least 135 points in a nine-race season, 120 points in an eight-race season (there are nine 250SX races in 2016), or 105 points in a seven-race season, in three seasons of Lites competition will be ineligible for the Supercross Lites Class.

This year there are nine points-paying 250SX races in each region, so the points threshold is 135, although as you’ll soon learn, it doesn’t matter this particular season. But there’s one rule that does matter, and here it is:

Lastly, if a rider wins back-to-back championships he’s automatically promoted, and if he finishes within the top twenty in the 450SX Class, retroactive to 2014, his time as a 250SX rider is over.

We’re in a rare situation in 2016. Other than Cooper Webb, who won a championship last year and will get promoted after this, his third year, there are literally no riders up for promotion, regardless of how many points they score. The only way anyone other than Webb is getting promoted is if they win the championship and have been around for at least three years.

Don’t believe us? Have a look at some of the names.

Josh Hansen self-promoted in 2012 and ended up eighteenth, but since the 450SX clause only applies to 2014 and 2015, he maintains eligibility. He went over the limit in 2011, which means he has at least two years left.

The first time Savatgy ever went over the points threshold was last year (his rookie year was 2013). He’ll probably exceed it this year, which means he’ll have another year left. Unless of course he edges out Cooper Webb for the title—in that case he’ll be promoted.

Remember the issues Martin had with qualifying early in 2013 and 2014? Thanks to that, and an injury in 2013, he didn’t go over until last year. If he goes over again he’ll still be eligible in 2017, unless he wins the championship this year.

Won the championship last year and is in his third year now. Even if he didn’t win any championships, he still went over in 2014 and 2015, and he will again this year. He’s gone no matter what and will be on a 450 next year. We have a feeling he won’t struggle to find a ride….

Hill went over in 2014, but missed going over last year by just four points, thanks to a DNF in San Diego. The only way he’s getting forced out is if he wins the championship.

Two more years left (including this year) for Stewart, who didn’t go over the limit last year. He’s only gone over once, in 2014, and unless he wins the title he’ll be free to come back for more 250SX action in 2017.

2014 was the first year in Davalos’ career that he went over the limit (he missed it by a single point in 2013), but a bout with Epstein-Barr kept him from going over in 2015. At least two more years (including 2016) for this guy, unless he wins a title this year.

Surprisingly, Zach Osborne has never gone over the limit. He missed it by just three points last year! He should go over this year, which will leave him with two years of eligibility. Unless of course, like everyone else, he wins the title.

We thought Bowers would go over last year but a late-season injury prevented him from doing so. Unless he wins a championship, he’s looking at a minimum of three more years (including 2016) of 250SX eligibility.

Can you believe Jessy Nelson has never surpassed the threshold? He was looking good for it last year but got hurt. He won’t go over this year due to another injury, nor will he win a title, so barring a championship, he’s free to race 250SX in 2017, 2018, and 2019.

He’s never exceeded the limit, but probably will this year. That’ll leave him with two more years, unless he makes a stop in Title-Town first.

McElrath went over the limit by four points last year. It was his first time, so including this year he’s got two years left. We’re not sure how much his current wrist injury will limit him, so there’s a chance he may not go over this year.

The older Martin has put in some great rides lately, but he’s also had some pretty bad luck. Translation? He’s never gone over the limit (he missed it by nine points last year), and if he hits more Tuff Blocks this season he might not even exceed it in 2016. Even if he does, he’ll have at least two more years in the class, barring a title.