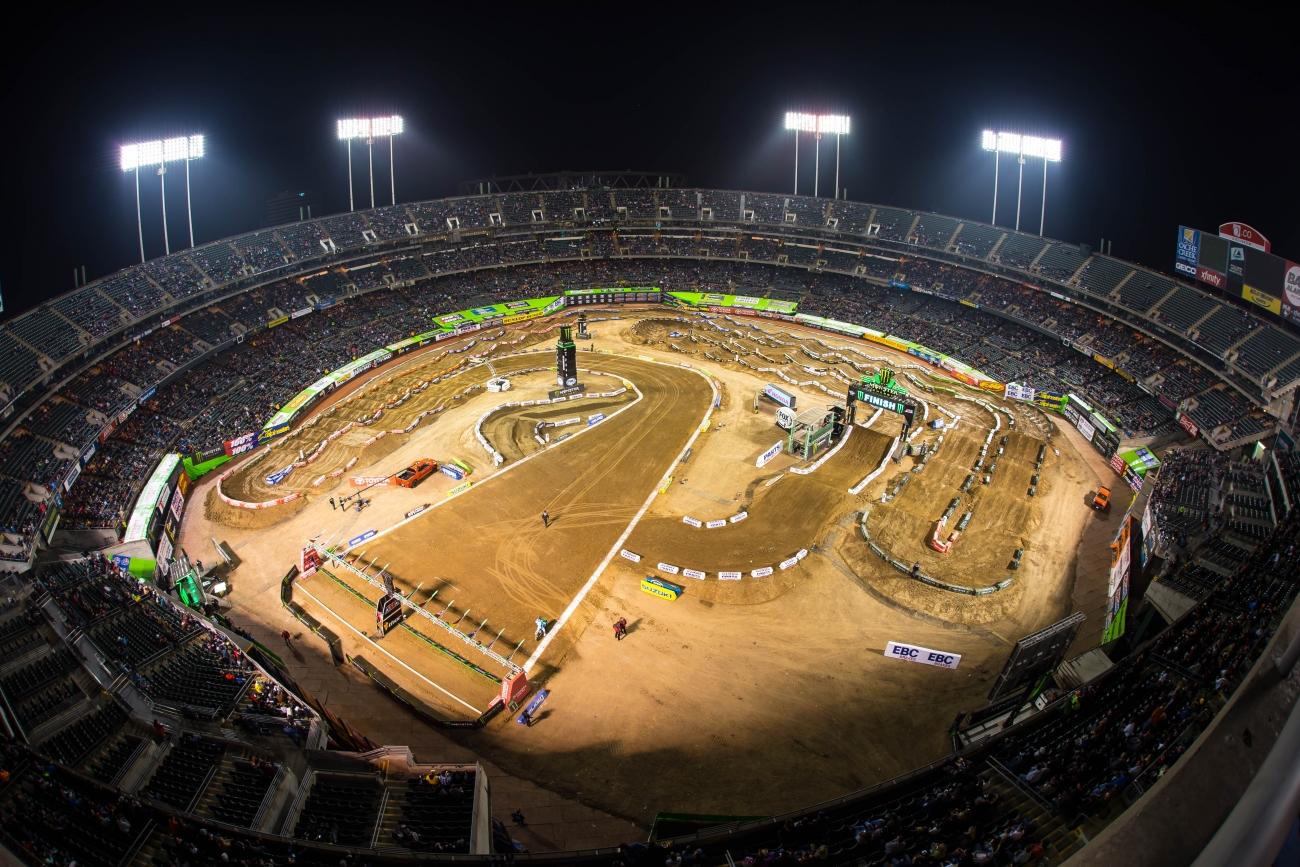 Oakland always seems to bring out the chaos. If the supercross season were a lunar cycle, Oakland would be the full moon. I don’t know if it’s the Bay Area itself or being in the “Black Hole” or just happenstance, but there is always craziness when we roll into the home of the Raiders and Athletics.

James Stewart has turned in some of his most dominant rides here when it seemed he could do nothing right up to that point. Last year, Ken Roczen seemed to have all of the momentum flowing his way until one false move flipped his entire season. The 250 class saw more of the unusual as Tyler Bowers and Cooper Webb had a massive collision, with Webb hitting the dirt. He would then put on a clinic, blowing back by Bowers en route to a runner-up finish. That same night, Malcolm “Mookie” Stewart won his first ever supercross, adding to the randomness that Oakland somehow brings. It will be interesting to see if Oakland has any more surprises in store this Saturday night.

The track could turn out fairly simple or fairly tough, depending on two factors: the whoops and the rhythm sections. With two whoop sections, it could add a high level of difficulty, but after last week’s brutal set, I expect Dirt Wurx to give the guys a break. I think they will be fairly easy, but that is purely a guess. The rhythm sections are basically in the same boat. There is potential to put some big combinations together but it all comes down to the angles and sizes that Dirt Wurx chooses to build. Until they unwrap the final product on Saturday, it will be anyone’s guess.

The start this weekend is very short. It will mean slow speeds, but it will also bunch everyone together as they enter turn one. I personally feel this is a safer option but I wouldn’t be surprised to see a few crashes as well. The key there is that the crashes will be slow in nature and thus safer in theory. I do like the 180 degree first turns versus last week’s 90 degree turn. It gives more room to drift outside and the outside gates have a chance if they can flat track around the first turn.

The over/under bridge will be in full effect, much to the delight of Racer X’s own Steve Matthes. I don’t feel the tingly sensation towards the bridge like Steve does, but I do think it’s a cool variation. The one question I do have with the overall design will be the length. As I mentally ride around a full lap, it seems very short, but again, that will depend on how steep the jumps are and how difficult the whoops turn out to be. Both of those variables dictate overall momentum and speed.

Hmm… let me think. The Dunge is firing on all cylinders and already putting double digit points on the field. This is the best Ryan Dungey we have ever seen, folks.

Chad Reed rode brilliantly in back-to-back weeks. He didn’t quite have enough juice to stay with Dungey, but fought valiantly to keep both Eli Tomac and Ken Roczen in his rear view mirror. He isn’t satisfied yet and it will be a fun fight if he can keep up this level of performance.

Eli Tomac just missed the box last weekend with a front end wash out. He has three fourth place finishes this season, but showed significant improvement over his first two races. He is still building from his summer of surgeries and that climb was evident last weekend.

Cooper Webb is three-for-three and showing no signs of slowing down. He methodically moved to the front last weekend and seems to be in complete control of the 250SX West Region.

Christian Craig won his heat race in a head-to-head battle with Webb and looked for a repeat performance in the main event. Unfortunately for Craig he wasn’t able to maintain that high pace and dropped back to a respectable third. He looked great all day and night, though.

Zach Osborne is as solid as they come. He didn’t quite have Cooper’s pace, but his fitness is beyond reproach and he is ready to pounce if Cooper opens any door at all.

Jason Anderson looked a bit “off” from the form he showed at Rounds 1 and 2. I‘m not sure if it was the burly whoops that slowed him, or if it was just one of those days, but if he wants to keep Dungey in sight, he needs to rebound this weekend in Oakland.

Poor Trey Canard can’t find any luck this year. He came out of the gates swinging at Anaheim 1, winning his heat race and looking to possibly win the main event. Since about halfway through the main event of that opening weekend, though, he’s struggled. He won Oakland a year ago, so look for an attempt to rekindle the magic.

Alex Martin has to be wondering what the heck is going on this season. He came in ready to contend for a championship and that has simply not happened. He crashed multiple times last weekend in Anaheim, surely frustrating the former podium performer. Look for a bounce back race this weekend.

Weston Peick wears his new replica Fly F2 helmet this weekend for the first time. In opening ceremonies, he graciously presents Vince Friese with a personalized helmet to ensure protection from any future beatings. Safety first, kids. (There’s no reason this column can’t be fun, right?)

Ken Roczen lands his second podium of the year.

Phil Nicoletti decides that racing supercross is simply too hazardous to his health. He meets with Feld on Friday and they reach an agreement for Phil to participate in the Weinerschnitzel Globe of Death during intermission. When reached for comment, Coy Gibbs felt that this was the safest move Phil has made in years.