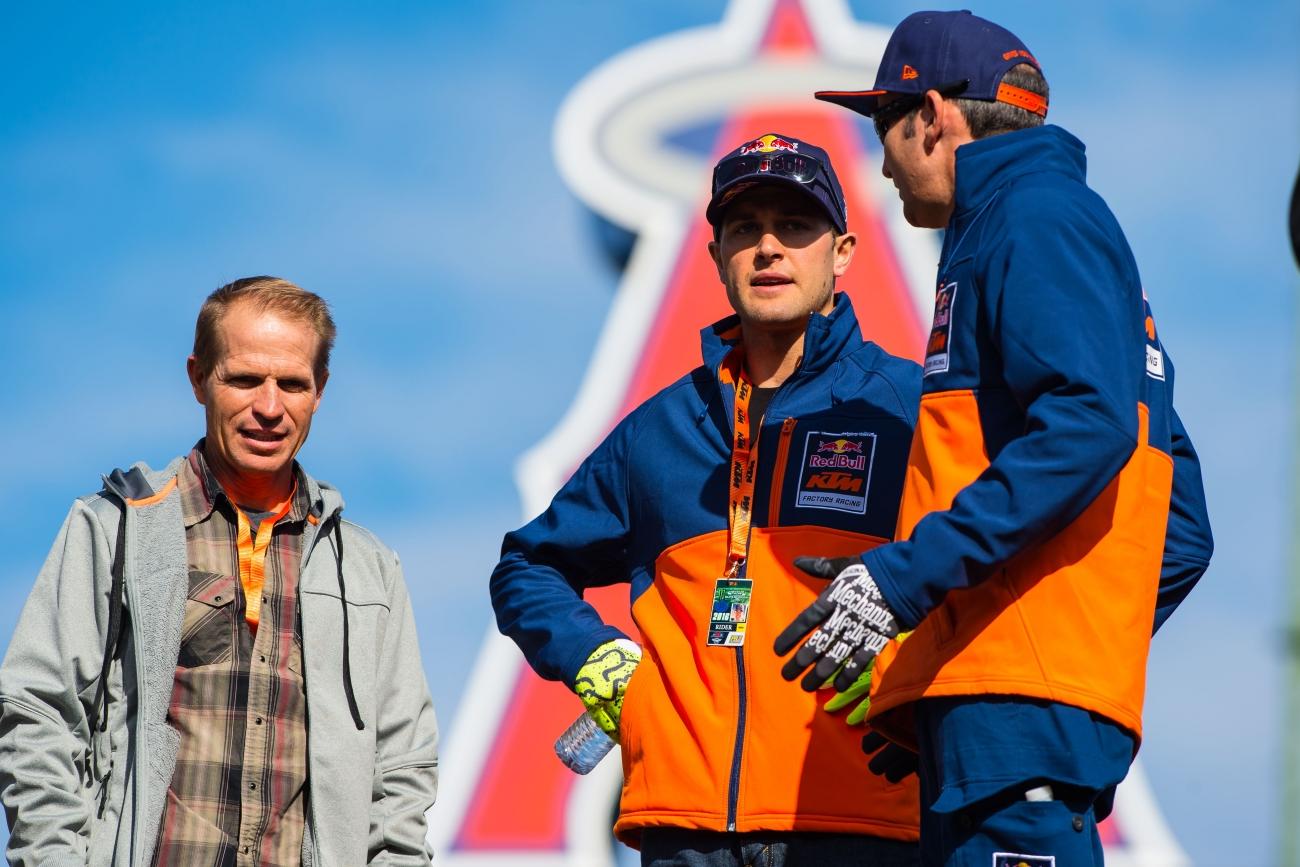 You could say this about most recent years in our sport, but 2016 is turning out to be pretty good for trainer Aldon Baker. The friendly South African has spent 15 years working with top riders like Ricky Carmichael, James Stewart, Ryan Villopoto and now, Ryan Dungey.

Last year Baker expanded his business with a massive property purchase in Florida complete with tracks, watering system, dozers and everything one needs to be a top-ranked rider. He’s also expanded his client roster from the Carmichael and Stewart days, when he only trained one rider, to a longer list, now including, Rockstar Energy Husqvarna’s Jason Anderson and Red Bull KTM’s Marvin Musquin. (He also had Adam Cianciarulo in the mix until recently. More on that in a minute.)

Dungey’s gone 2-1-1 in three races this year, and with Anderson winning the opener, 2016 has been a Baker three pack. Dungey looks to be even better than last year, when he was still good enough to walk to a second 450SX title. Baker, although prefacing the talk with “it’s still early” a few times, likes what he sees.

“After three races we’re looking really, really good,” he said in a near deserted Angel Stadium parking lot after A2. “I’m impressed. He’s (Dungey) been solid. He’s made it count. It’s important with the field being that stacked to be good at the starts and make things work and do well in the heat races and everything to put a good evening together.

“I think the first race was probably his toughest, going down,” he continued. “And I think that was the true test when I saw what he did with a bad night. I knew that, man, he’s on. He’s definitely producing. He’s confident. I’m proud of the guy. I think it’s phenomenal. He’s had a really good off-season.”

Ah, yes, the off-season. It can’t be a great sign for his competition that Dungey was “all-in” for the second season at the Baker’s Factory. A year ago, he wasn’t living near Baker’s place yet, he had some time off to get married and was testing a new KTM. Dungey is perhaps the best ever, or tied with Chad Reed anyways, in the unofficial poll of racers who never, ever have a bad night. And while he may not have the wins of Villopoto, Stewart or Carmichael indoors, his podium numbers are off the charts. Simply put, Dungey is a dirt bike racing machine. According to Baker, this off-season was “more on the clock” and much more “progressive”.

Trouble for the rest of the guys? Definitely. And if Dungey does fail to get to the top step, Anderson might be the one to grab another win or two. As with Dungey, Aldon likes what he sees from the #21 so far.

“I’m proud of him, you know he hasn’t got as much experience, I think, as everybody else, but it’s good to see him riding mature,” he said. “He’s fast and he has the speed, but we’ve been really wanting that maturity to come through, to pick your battles. If you do get a bad start have you work your way.”

Reading that statement back, one can surmise that Baker seems to know that Anderson has, at times, made some questionable moves on the track. It doesn’t happen all the time, but even just a few bad decisions can leave people questioning even regular passes, ones that are clean, but aggressive.

“We’ve spoken about that (other riders being upset), and by no means is he trying to make… he knows it’s important to try and keep the peace,” says Baker.

And what about Musquin? Well, he hasn’t been as successful early on like the other two but Baker says there is no panic. “We all know it’s his first year on 450 and it’s a big jump, especially with the talented field that we have. He came in over a month behind with the hand injury, which is not ideal. But I still believe he’s capable. I think he’s good at starts, but he has to finish them off well.

“One thing about Marv, I’ll tell you when he does click and he gets into his groove where he’s enjoying the riding and not maybe so tense, he rides really well. He’s got that European style and it’s good.”

The one negative for Baker this off-season was the sudden departure of Monster Energy/Pro Circuit Kawasaki’s Cianciarulo, who had been with Baker for four years, the longest of any of his clients. Cianciarulo has had a rough start to his career due to injuries, but still shows a lot of promise.

On the departure, Baker took the high road. “Obviously I was surprised,” he says. “I’ve invested a lot of time with him. It’s tough, but I understand the reasons that he has to want to go in his own direction. I wish him well. I’ve always said that my program’s not easy and you’ve got to be all in and if that’s not where you’re at it’s okay. I still respect him. He’s a great guy, great family. I wish him well.”

When we asked Cianciarulo about the breakup with Aldon a few weeks ago, he said, “I’ve always been one to work hard and strive to be the best I can be. I didn’t see the work I was putting in translate to results, body-wise, so for me it was time to change it up.”

Regardless, Baker’s got his guys winning races, looking good and the plan, as they say, is on track. It’s a long season and anything can happen, but would it shock anyone if at the end of 17 rounds of Monster Energy Supercross that “Team Baker” is 1-2 in 450SX points? The Bakery is cooking up some wins once again.