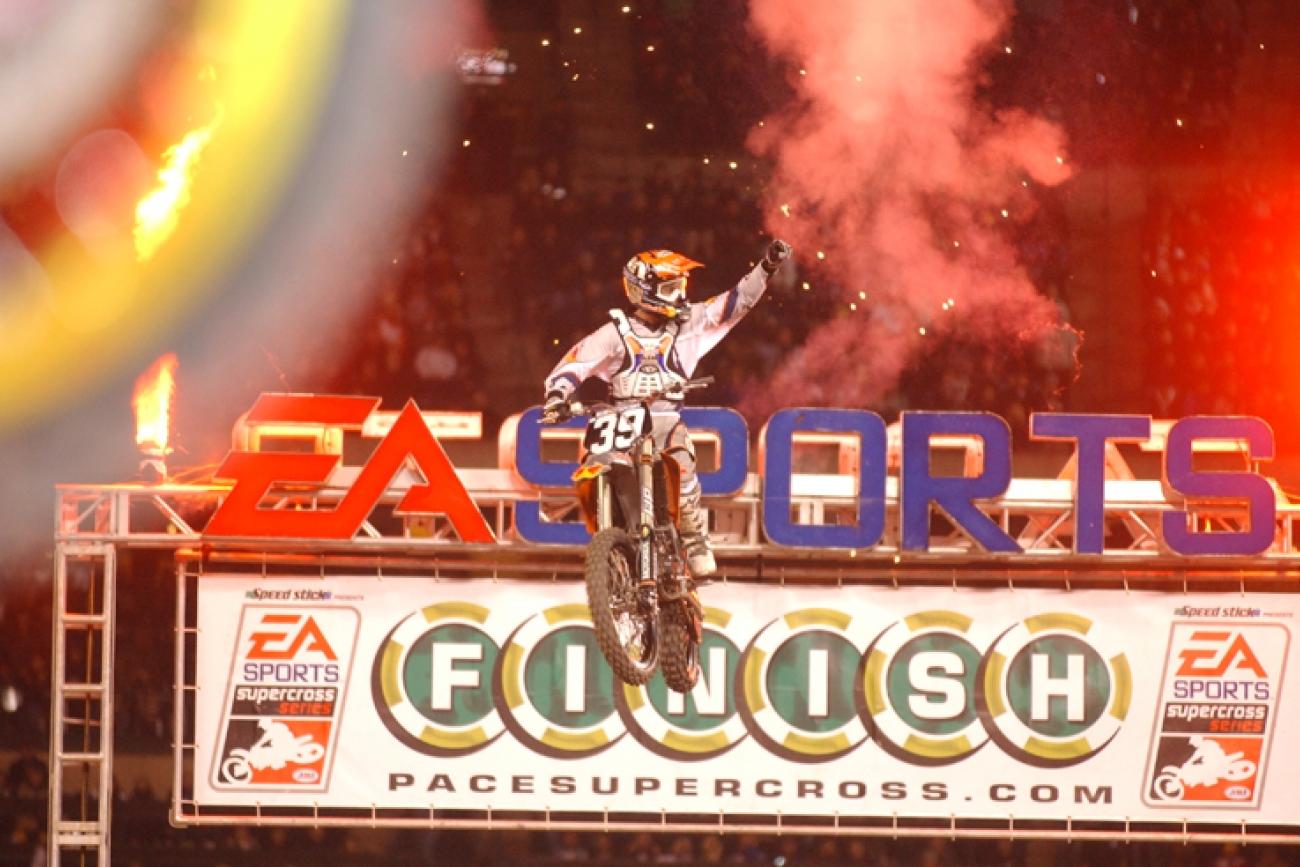 I only got to see you once, up close in person when you came to our MXprivateer pit in 2005. I thought you'd be taller, but you smelled amazing. As our sport is growing and the pains associated with it create new issues, it seems quite a few fans are calling for more grass roots and closer racing.

I feel in your reviews that you're torn like most of us and that while you have to make a living promoting all the (must have) stuff and space age unobtainium, it's detrimental to the local scenes and pro racing privateers.  Divisive lines are, and will forever be, determined by our lust for bigger, better, faster.  The bikes are getting too loud and too expensive, local tracks are being shut down due to noise and race signup is poop. On the pro scene, purists would call for more of the "stock" class racing and let the riders decide who's champion. What do you think about abandoning all the homologation and claiming rules, building smaller-displacement bikes and simply racing straight-up production bikes at the pro level?

I’ve always been 5’7” but I do pride myself on my scent. Was it a mix between Tom Brady’s sweat daffodils and Maxima contact cleaner? I get that a lot.

You’ve got an interesting idea about going to more of a stock class format. It reminds me of the 1980s at the World Mini Grand Prix where Pomona Valley Kawasaki used to bring a dozen identical KX80s for the Race of Champions. The best mini riders, regardless of what brand they usually rode, would saddle up and race on identically prepared bikes. It was a cool event and something you would never see now.

The problem with your plan is that it would kill aftermarket companies that make their money building hop-up parts. And many fans love coming to the races to see the trick factory parts. The answer is right in front of our noses—we just need the manufacturers to grab the ball and go. There are injected two-stroke engines that are cleaner burning that a four-stroke motor. Look to the marine industry for those examples. We could be building/racing cheaper and simpler bikes and get folks back into the sport at the ground level. It would make racing at all levels more competitive and the noise problem goes away. But Honda put their foot down and swore they would never make two-strokes again; I’m not sure how we get around that. [Editor’s note: I’ve asked some people about these direct-injected two-strokes, used primarily as boat/marine engines. Supposedly they only work at steady, constant throttle like a boat would use. They aren’t reliable or don’t perform well in on-off throttle situations you’d use on a dirt bike or street motorcycle. At least that’s what I’ve heard in rudimentary engineering terms. - Weege] The manufacturers will build what the consumers want—they have said that. But what happens when there aren’t any more consumers?

I heard Ryan Dungey talking about roll speed. On these stupid four strokes with all of their compression braking, how is this accomplished? Do factory teams run slipper clutches like they use in dirt track racing, or do they keep it in a higher gear, or keep the gas on a little bit, or turn the idle up, or what? Are there any electronics attached to the clutch on a Factory bike? Is this legal?

Manufacturers have come a long way with engine braking since four-strokes came along. Slipper clutches were one of the early solutions but now most of that fine tuning is done electronically with fuel mapping and ignition timing. Good engine builders can put on their propeller hat, connect their computer to the bike and alter every characteristic about the engine, including the amount of engine brake. Each rider is different, but for me a little engine brake is nice. It helps set the bike into the turn by weighting the front end and it helps keep trajectory low when you chop the throttle at the base of a jump; it has its advantages.

“Roll speed” is as much about technique as it is bike setup. Dungey was referring to carrying momentum through the turn instead of charging in hard, braking hard, pivoting and then accelerating hard. When a track surface is slick a rider who can carry his momentum and upset the chassis the least is rewarded with the best lap times and fewer mistakes. This is done by running sweeping lines, leaving the clutch alone and being soft on the brakes and the throttle. Many of the techniques that you would see in road racing apply. Dungey gave a clinic on that technique in San Diego. I don’t know about any electronics being attached to the clutch but, then again, nothing surprises me anymore when it comes to electronics.

Congratulations on your upcoming 14th Anniversary Anaheim 2 Victory.  I attended that race and it was an incredible night for the fans let alone you, who put together some perfect late closing laps to seal the win over a charging James Stewart. Now my question.........What did you do later that night?

Wow, 14 years have gone by already. It doesn’t seem like that long ago, unless you ask my knees and then it feels like it’s been about 50 years. That was a great night and it marked the last supercross win of my career. At that point I was already married so there aren’t any lewd stories that include women and drugs and hundred dollar bills at a strip club in Hollywood. That sounds more like a post-victory celebration with Josh Hansen. I hung around the Red Bull KTM rig late that night to do interviews and sign autographs and then I headed home with my wife. We probably had a bowl of Frosted Flakes before we went to bed because, well, they are delicious. If you want a great post-race party story you have to hit up Denny Stephenson or Phil Lawrence; just make sure there are no women or children present when you do.