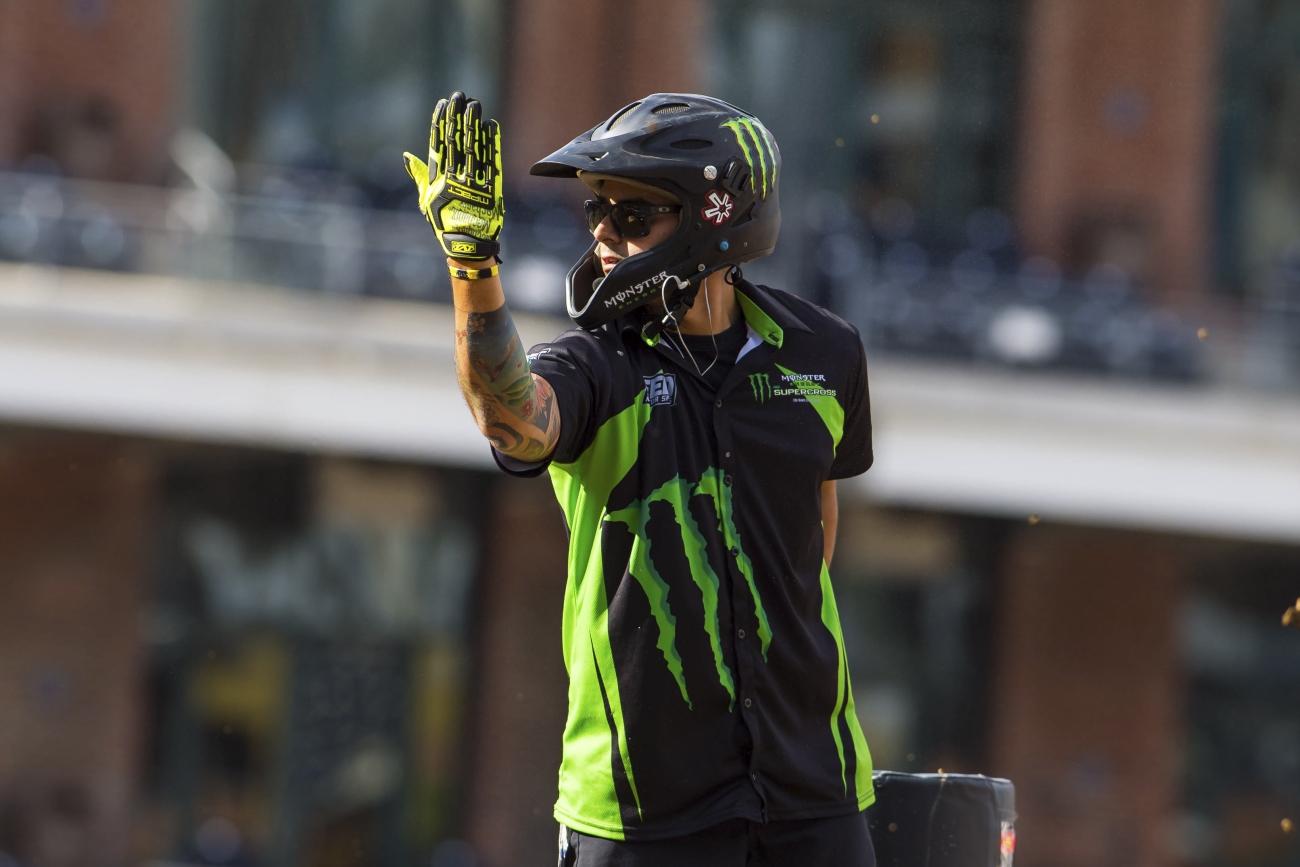 The original “Point Break,” produced in 1991 and starring Patrick Swayze and Keanu Reeves as a gang of surfer bank robbers, is a cult classic. Reeves plays an FBI agent who goes undercover to catch Swayze and his gang. Really, it's a solid flick.

The “Point Break” remake released in 2015 doesn’t look nearly as cool. But the good news—it features some cool dirt bike stunts. Riley Harper and Oakley Lehman performed the stunts and talk about it below.

Last week a major bombshell was dropped on the skating world as GrindTV reported that DC Shoes and celebrity skateboarder Rob Dyrdek had parted ways. Dyrdek, star of the MTV reality shows Rob and Big, Rob Dyrdek’s Fantasy Factory and most recently Ridiculousness, first signed with the brand in 1995. Quicksilver, who owns DC Shoes, filled for Chapter 11 bankruptcy in September, and has now focused on partnerships with new riders, per the report. DC Shoes has not made an official announcement on the report. One of the new athletes added to the DC roster this year was James Stewart, who was signed by the brand prior to the season. From the GrindTV report.

Dyrdek was one of the original riders for the brand, and received his first pro signature shoe in 1995. Over a two-decade-plus relationship, the brand developed 29 signature model shoes for Dyrdek, who helped them gain exposure through his popular MTV series and social channels (Dyrdek has over 3 million Instagram followers).

SOCIAL STATS From the home of burgundy

(If you didn’t already know, Hookit is a digital platform created to support and connect athletes, brands, and sports. Hookit provides real-time rankings, data, and insights to quantify the talent and marketability of athletes for the industry.)

No denying that The Rippah, Jimmy Decotis, has a huge following. On social media, he jumped Cooper Webb this week to take the top 250 spot. Interesting to note: French import Maxime Desprey went from outside the top ten last week to fifth this week.

James Stewart may have been fourth in interactions, but he picked up 11,813 new follows—tops among all riders. Dungey, Roczen, Reed and Justin Barcia were all in the top five.

Stewart also had the top post of the week, with his announcement that he would give San Diego a go. It garnered 57.5K interactions. Stewart rode two practice sessions before deciding he wasn't ready to race. Maybe that sets us up for another big post late this week!

At six, most young boys are flailing away, desperately trying to hit a baseball off a tee. Aj Stuntz (Aj Heinicke) is doing street bike stunts. Seriously. Check out this kid from San Mateo, CA, ripping.

Sports Illustrated, the golden standard in sports journalism, recently got a behind-the-scenes look at RCH Soaring Eagle/Jimmy John’s/Suzuki’s Ken Roczen. The story features Roczen riding in Southern California and in the gym.

Can we talk for a second about how shredded Roczen looks? Seriously, he looks like Sylvester Stallone in Rambo.

Check out the entire feature on SI.com.

Did you know Ryan Dungey is on a Wheaties box. making him the first motocross athlete to do so? Of course you did—it’s been everywhere. It’s a unique honor for the sport and one that may never be repeated. Wheaties released a cool behind-the-scenes video of the Dunge on the box. We're still wondering about the jeans, though.

Go behind the scenes and see the making of @RyanDungey's national Wheaties box, the first ever motocross box. https://t.co/XdlgtL44Ww

So, apparently no one saw my message and sent me video footage from the Wienerschnitzel Wiener dog race at Anaheim. I was thoroughly disappointed, until I searched google and found that this was not a one-off race—there is actually a Wienerschnitzel Wiener Nationals and it’s glorious. Check this out from 2013.

And your thought the Weston Peick/Vince Friese thing was bad! Check out this hockey ref tattoo a player. Damn! Matthes, what is going on with your beloved sport, man?

While the start of the MotoGP season in Qatar is still two months away, news is starting to ramp up with upcoming test and team media days. Movistar Yamaha recently held their launch and apparently Valentino Rossi is still not happy with the way things ended last year. MotoGP riders just can't avoid the drama! David Emmett from MotoMatters.com has more.

Rossi denied he would be motivated by revenge, against Márquez and Lorenzo. His main motivation was the love of competition, and the challenge of beating his rivals, he told the Italian press. His responses to questions about respect were prickly. Lin Jarvis had said that everyone needed to show each other respect to help calm the situation, but Rossi felt respect had been singly lacking in 2015. "At the end of last year, especially Márquez, but also Lorenzo did not show any respect for me. I always had respect for them, but we will have to see what happens. Respect has to be something mutual," Rossi said.

Despite feeling that Lorenzo had shown him a lack of respect, Rossi had shaken the hand of the Spaniard at the start of the presentation. "You have to be strong enough to leave your personal problems aside," Rossi said. "Lorenzo is my teammate, and has been for many years. We have to be professional, and work on developing the Yamaha. It's easier to work when the atmosphere is good, and I expect that to be the case." Would Rossi also shake the hand of Marc Márquez when he saw him again? "Fortunately I can say that Márquez is not my teammate."

Check out more, there are a lot of details about the upcoming season for Yamaha.

In other news, Crash.net is reporting that the satellite Honda teams will start the 2016 MotoGP testing using last year’s engines. Honda struggled with their engines last year.

Either way it appears that the re-designed 2016 engines, perhaps the most crucial aspect of the new RCV given that engine character was the Achilles heel of last year's bike, will only be available to Marquez and Pedrosa at the first pre-season test.

A question mark also hangs over 2016 satellite engines for the second test, at Phillip Island in mid-February, after which only the Qatar test remains. The world championship then begins at the same Losail circuit from March 17-20.

There have even been rumours that the satellite Hondas could race with last year's engines, but those appear unfounded and the worst case scenario is that 2016 engines are given to satellite teams at round one.

World champions with Marquez in 2013 and 2014, Honda watched its riders battle aggressive engine behaviour last season, something HRC is determined to correct.

You can read the full report on Crash.net. Also check out MotoMatters.com, who has some good stuff on the matter.

Snowboarder Story of the Year

I don’t want to ruin the story, so I’ll leave it pretty simple: Racer X contributor Brett Smith wrote an amazing piece on the background of X Games snowboard champ and Paralympic medalist Keith Gabel. Just the lede will leave you wanting to read more.

Keith Gabel experienced unfathomable adversity before he finished elementary school. He was kidnapped, lived without hot water or electricity and nodded off in all-hours diners. As an 11-year-old, he spent a winter wandering the streets of Eugene, Oregon, while his mother, Tanya, dealt with the suicide of her husband. Gabel witnessed the death, watching his stepfather pull the trigger on the morning of Christmas Eve, 1995. By the time Gabel lost his lower left leg 10 years later, he knew how to handle hardship.

Check out the full article on Xgames.espn.com.

Boarding in the sky

Reader Jordan sent in this video of a different kind of snowboarding.

Yeah, eff that—definitely not for me.

Dude was battling for the lead in the race until suffering the tank slapper to end all tank slappers, and the high side to end all high sides. Somehow he was okay, and even resumed riding.

See you next week