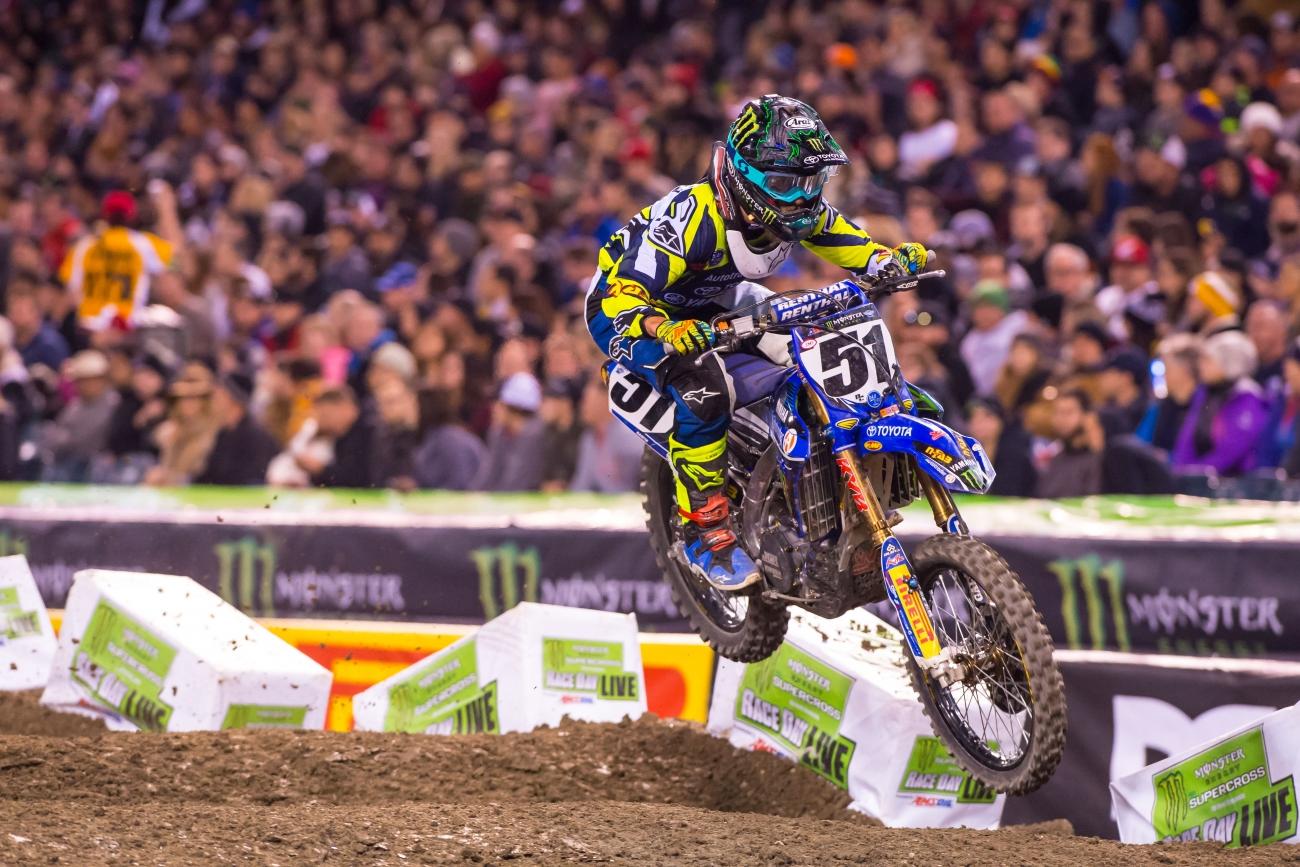 Blake Baggett – Collarbone, Ribs and Scapula
Comment: Baggett broke his collarbone, ribs, and scapula during the pre-season. He’s back riding and plans on returning in Oakland.

Justin Barcia – Thumb
Comment: Barcia injured his thumb in a pre-season crash and will undergo surgery. He attempted to ride through the pain but it didn’t work out. There is no timetable on his return.

Justin Bogle - Foot
Comment: Bogle hit his head at San Diego and was generally banged up, but it is not believed that he suffered a concussion. He could probably race if he weren't also  recovering from a broken foot suffered back in December. He will miss A2 and possibly Oakland.

Kyle Chisholm – Shoulder, Concussion
Comment: Chisholm had a nasty crash in San Diego, clipping a Tuff Block and endoing into the face of a triple before getting run over. Chisholm ended up with a dislocated shoulder, concussion, stitches, and general soreness. He’s scheduled to have surgery on his shoulder on Friday, January 22, and hopes to be back for the second half of Monster Energy Supercross. To have a look at Chisholm’s injuries, go here.

Tyler Enticknap - Thumb
Comment: Enticknap went down in San Diego during practice and broke his thumb. He's out for at least four weeks.

Vann Martin – Collarbone
Comment: Martin went down in the whoops in Anaheim and broke his collarbone. He underwent surgery and will work on being ready for the East Coast rounds.

Dusty Pipes – Shoulder
Comment: The Fly Racing/TPJ/Suzuki rider sustained a dislocated shoulder, broke his humerus, scaphoid and tore some muscles in his shoulder in a pre-season crash. No timetable on his return has been announced.

Andrew Short – Shoulder
Comment: Short injured his shoulder during pre-season practice. He had surgery, is back on the bike, and in San Diego he told us his recovery is ahead of schedule. He could return as early as Dallas.

James Stewart – Banged Up
Comment: Stewart was knocked out when he and Ryan Dungey collidedat Anaheim 1. He sat out San Diego after riding two afternoon practices, and a decision is yet to be made whether or not he’ll race A2.

Ronnie Stewart – Wrist
Comment: Stewart broke his left wrist in December isn’t sure when he’ll be able to line up again, but once he begins physical therapy, which he hopes to do soon, he’ll have a better idea of when he can get back on the gate.

Tevin Tapia – Wrist
Comment: Tapia cased a jump and broke his scaphoid in the pre-season. He hopes to be ready to race when supercross heads east.

Broc Tickle – Wrist
Comment: Tickle fractured his distal radius in his right forearm earlier this week in a practice crash. He is expected to miss four to six weeks.

Daniel Baker – Ankle
Comment: Baker crashed during practice in San Diego while trying to avoid a downed rider in the whoops. He underwent surgery to repair torn ligaments and will miss the rest of Monster Energy Supercross.

Zach Bell – Banged Up
Comment: Bell missed San Diego after a practice crash earlier in the week, and will sit A2 out as well. He’ll be back at it in Oakland.

Nick Gaines – Femur
Comment: Gaines fractured his femur at Pala Raceway in California while getting ready for 250SX East Region. He underwent surgery to have a rod and two pins inserted and hopes to be ready to go for Lucas Oil Pro Motocross.

Shane McElrath - Wrist
Comment: McElrath broke his wrist during the pre-season and recently had the pins removed. An exact return date is unknown.

Jackson Richardson - Shoulder
Comment: Richardson injured his shoulder at the opener and has opted to undergo surgery to repair the damages "that have been giving him trouble for a while," he announced on social media. There is no timetable for his return.

Darian Sanayei – Back
Comment: Sanayei sustained several fractures in his back while preparing for 250SX West Region and will miss the first several rounds.

Mark Worth – Hip and Elbow
Comment: Worth crashed hard during practice in Anaheim and dislocated and fractured his elbow and dislocated his hip. A return date is unknown at this time.