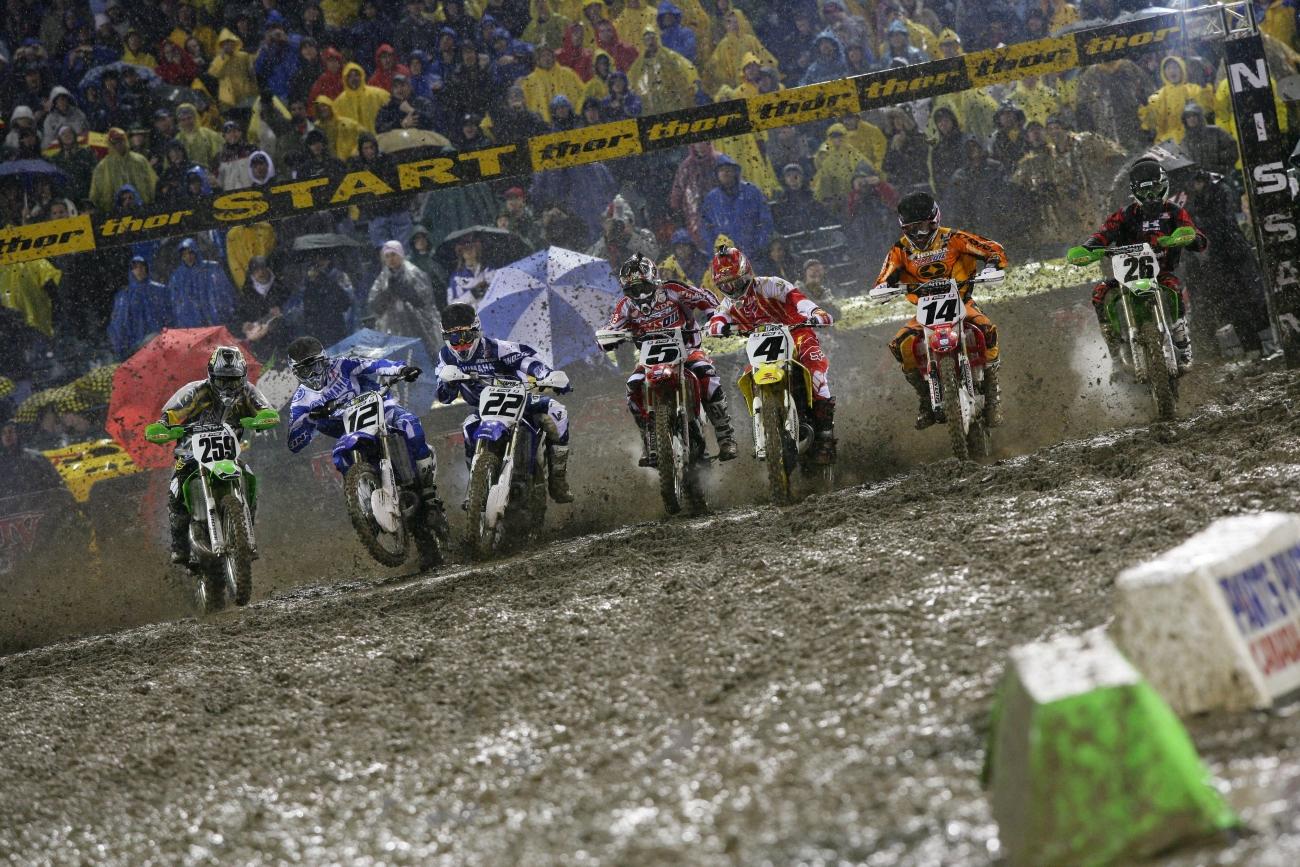 I pulled down a cardboard box from a shelf that was too high and the thing toppled over and nearly gave me a black eye. This box—that was now no longer a box—was full of magazines, notebooks, and dozens of dog-eared pieces of paper—even my credential for the 2005 THQ AMA Supercross Series. That’s when I saw the headline of an article I’d put together a few weeks before the Christmas of 2004, “Mississippi Burning: Catching up to with Kevin Windham.”

It started: “Heading into what just might be the most exciting supercross season, Kevin Windham is the wild card in the pack. Call him what you will—confusion-maker, boat rocker, unknown entity—but the soon to be 27 year-old heads into 2005 as the full-on sleeper. While the hype surrounding the Carmichael/Reed/Stewart trio has reached Defcon 1 levels, race fans seem to have forgotten how very well Windham did in 2004. Through winning five 250cc main events in '04, a fast-closing Windham came within just nine points of winning the 2004 THQ AMA Supercross Series.”

Then the memories of that time came rushing back.

With Ricky Carmichael’s exodus to Team Suzuki during the winter of ’04, Team Amsoil/Chaparral/Honda/Factory Connection rider Kevin Windham had been put in the driver’s seat of the Big Red Machine. And he was ready. Having bashed out over 2,000 testing laps “back in the woods in Mississippi,” the veteran racer (and crowd darling) was taking the onset of the ’05 season deathly serious. He needed to as it was poised to be the most competitive season, arguably, in supercross history. Reigning champion Chad Reed, a rehabilitated Carmichael, and a new kid named James Stewart were all spitting fire as the season opener loomed, set for January 8, 2005, at Angel Stadium in normally sunny SoCal.

“I've been more than happy to hide in the shadows while all the hype of the three man race goes on [between Ricky Carmichael, Chad Reed, and James Stewart],” Windham said to me over his phone in mid-December. “I held my own last year and I know this year—2005—is going to be even better.”

“You seem to have been left out of the James/RC/Reed equation,” I said. “Does that bother you?”

“No. I think the longer those guys talk, the more anxiety they burn up,” he shot back. “It seems like those three guys are in a battle of words. You know so many people are tight-lipped about the new season and about those three guys that I'm just going to go to the first race and do what I can do. I'm not ‘living for January 8’ or any race after it, for that matter.…”

That’s a reference to the January 2005 issue of Racer X Illustrated, the one with James Stewart on the cover with the declaratory headline “My Whole Life Is About January 8.” James came to our cold and dimly lit Racer X office in a white van, unloaded his bike and gear, and began posing for Cudby’s camera and strobes. James was in a talking mood, so I hit him with question after question. That issue hit the streets with a bang. Truth be told, it was the last big story of my full-time moto-journalist career, as car racing and the full-time fine art of self-sabotage had caught my fancy.

Cut to Thursday, January 6, 2005 at high noon and the Diamond Club at Angel Stadium. Press conference time: out trotted Travis Pastrana, Jeremy McGrath, Reed, Stewart, and Carmichael. Oh, and Kevin Windham. These collectively had earned 25 AMA championships and 330 race wins. And Ricky Carmichael wasn’t going to let anybody forget it.

“I’m doing my own thing; when he wins 108 races, then he’s the man,” Carmichael would answer one reporter’s question about Stewart. (RC didn’t really like the questions tossed to Bubba about being a potential SX champion).

Added a smiling James Stewart, “There are people who say ‘He wins or crashes,’ but I’ve won a lot more races than crashes.”

When it was all over, Windham looked just plain bummed out. Nobody had asked him a single question. Dressed in black and running a heavy beard, K-Dub leaned on a Diamond Club bar top made out of baseball bats. I knew he was miffed. I could see it. I also knew he truly was the sleeper. So I shook his hand and turned on my recorder.

I knew where he was coming from. I wished him good luck and set about my then new favorite national pastime of drinking beer until it was coming out of my ears. Things were overflowing outside, too, as it continued to rain and rain. It had been raining for weeks. The NBC affiliate KNBC, which played on some of the TV monitors in the cute club, were urging people to go to the friendly neighborhood Home Depot and go in on the ark-building business.

It rained all day Friday. It rained black sheets on Friday night. The KNBC people were at it again, calling for a 100 percent chance of rain at race time on Saturday evening, 7:30 p.m. Sitting at the bar at Dave and Buster’s with my longtime partner in crime and Racer X founder Davey Coombs, I said (five martinis in), “Man, dude, it’s all coming unglued.”

Saturday broke battleship gray. Word broke out that AMA director Steve Whitelock had arranged for an ad hoc riders’ meeting and every member of the supercross fraternity funneled down like pairs of animals into the dank and drafty concrete catacombs of the monolith.

“We had to modify the schedule to take care of the conditions out on our race track,” declared Whitelock. “That’s my program, and I’m sorry if it doesn’t fit yours because we have to take care of 45,000 people sitting up in those stands!”

“Are there any questions?

Silence. Then Windham raised his hand.

“Who gets the watch?”

It was a perfectly timed smartass question. KW wanted to know who won the Tissot watch for being fast qualifier. Even Whitelock laughed.

From my “View From the Fence” column in the April 2005 issue of Racer X:

The bikes fired and the rain continued to fall harder and harder. Clear Channel had a battery of power washers set up at the mouth of the stadium tunnel. Upon leaving the track, riders would hand off their bikes to their mechanics, who were then left to blast the thick, gooey mud off as quickly as possible. The reflection of the flying mud and overspray was quite a sight to behold.

By opening ceremonies, the track had almost completely dissolved into a thick, brown pudding. Regardless, a sold-out crowd—almost all dressed in yellow rain coats and holding up umbrellas—looked down in force upon the stadium floor, waiting for what promised to be chaos.

As the mechanics rolled the bikes to the starting gate for the main event, nobody knew who had the edge (and nobody would know who 90 percent of the riders were after the first lap).

Chaos did reign supreme as Carmichael aced the holeshot and led early. “You don’t get mud in your eyes if you’re out font!” I heard the announcer deftly point out. Within the span of a few laps, Stewart had bailed in the whoops while Reed just plan hobbled to a stop, his front wheel fossilized. Up front, Windham flailed along, but flailed along better than most. Carmichael kept on chugging in P1 only to fall at the base of a small jump. It took the world’s best rider a full minute to get going again. When the race was finally put out of its misery, and after some initial confusion, Windham was named the winner.

An hour after the checkered flag had flown, Honda mechanic Brent Myron rode Windham’s CRF450R beneath the Factory Connection tent and placed the bike up on a stand. It was going to be a long night for the mechanic, but at least he and KW had won the race. Meanwhile, standing outside the awning, a handful of fans watched on quietly. The “perfect storm” showdown had been put on hold for at least seven days, but they didn’t seem to mind, even as rain began falling harder.