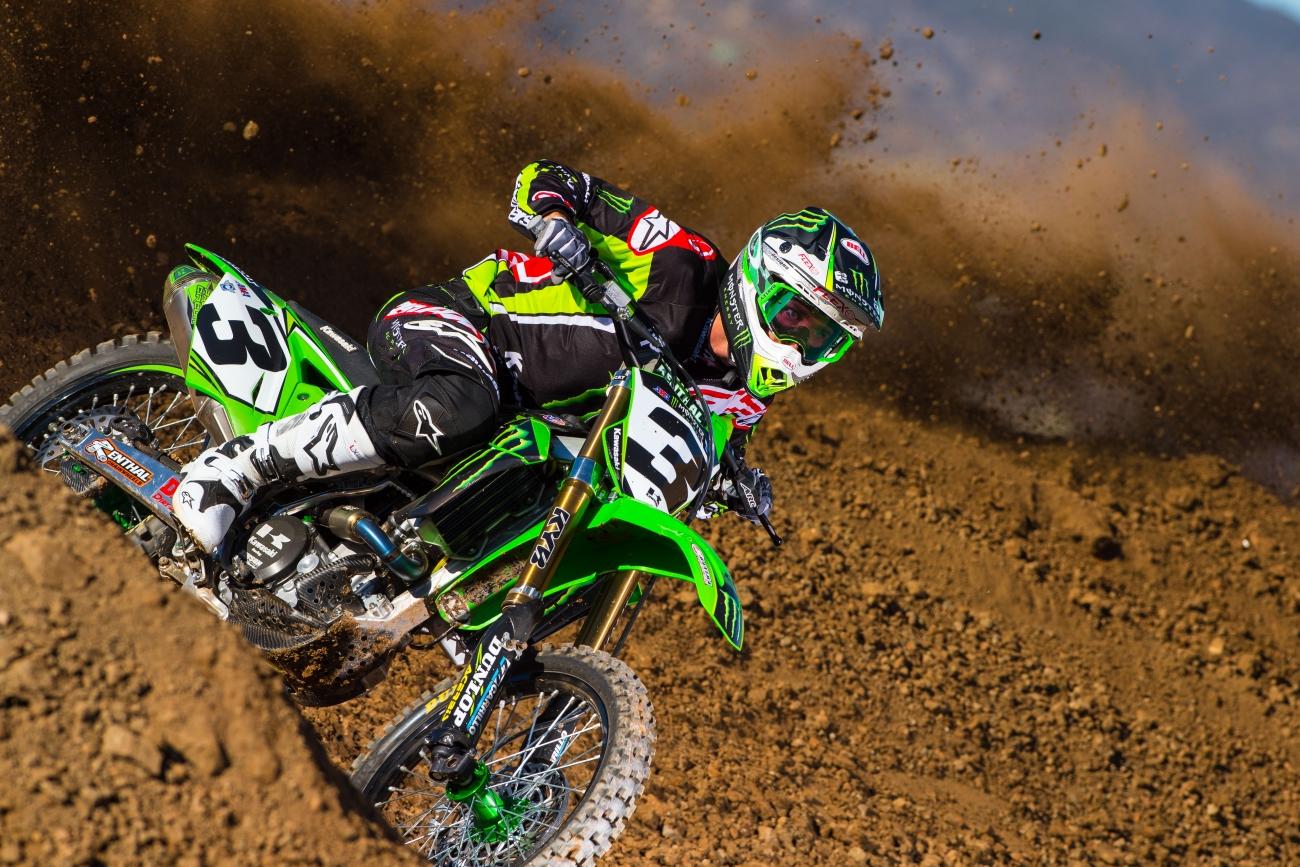 All is good in the world before Anaheim 1. Before Monster Energy Supercross begins, everyone is a contender, everyone believes, and everyone has hope. While the year won't work out as planned for everyone, it's certainly going to be fun to watch the stories unfold—stories like the battle for the 450SX title, and smaller ones like young kids trying to build a career. It's all on the table starting this Saturday, and the only way to make sense of all is to start listing all the reasons we'll be watching. You should, too.

Last year’s 450SX runner-up is switching brands and coming off double shoulder surgery. Can he lead Monster Energy Kawasaki to the title?

Love him or hate him, supercross is more exciting with Bubba on the line. He’s searching for his first title since 2009.

Dungey has never won back-to-back titles in his career. He won a career-high eight times in 2015. Will we see a similar performance?

Millsaps is joining his third team in as many years after being let go from Monster Energy Kawasaki at the tail end of supercross last year. Can he revive his career on a KTM?

Off-season wrist surgery slowed his progress, but the 2015 250SX East Region Champion certainly has the skills.

Where???? How do we still not know???? [Ed. Note: Hold on, we DO know what Reed is doing. The rest of the stuff still holds.] If Reed wins five times this year, he will pass old-rival Ricky Carmichael for third on the all-time wins list. With six wins, he would join Jeremy McGrath and James Stewart as the only three riders with 50. With 14 starts, he’ll become only the third rider to make 200 main events. There’s a lot on the line for Reed this year.

Illness relegated the former MXGP rider to just three rounds last year. The bright side for the Swiss native—he finished top ten in all three, and his technique showed promise.

Ricky Carmichael’s 2003 season marked Honda’s last premier class championship. Since then, five other brands have landed the crown. Can Canard or Seely deliver?

Mike LaRocco, Chad Reed, John Dowd and Kevin Windham are the only riders to win past the age of 30. James Stewart looks to join the club this season.

Webb returns to the West Region where he won six of eight races last year. Does anyone not consider him the title favorite?

With few seats open at the 450SX table, the 2014 250SX East Champion had few big-bike options. Then GEICO Honda revitalized its 450 program and signed Bogle to a one-year deal. After this year, they’re back to 250 only. The pressure is on Bogle to secure a new 450 ride for 2017.

Ken Roczen, the two-time winner at Anaheim 1, is searching for his first 450SX title. Winner of two of the first three races a season ago, don’t expect a slow start for the German.

Aren’t we all just hoping to have a healthy Wil Hahn out there in 2016?

Steve Matthes is foaming at the mouth waiting to return to the Mother Land.

17. Supercross Returns to the Mass

It’s been since 1990 that supercross has visited Foxborough. It’s coming back to a hungry Northeastern fan base.

No, he didn’t get fired from Red Bull KTM. TLD is the new factory team for the Austrian brand. Hill struggled with injuries last year, but could be a title favorite in the East Region.

If you went to New York, err, East Rutherford last year, then you know how FREAKING sweet day races are. We’ve got two this year—St. Louis and Foxborough.

Sweet baby Jesus, you can’t get much better.

Riders are fickle creatures. The switch to KYB worked for Kenny at the Monster Energy Cup—will it have the same affect during the regular season?

I mean, did you see his freaking starts at the Monster Energy Cup? Look out for El Hombre and his revamped Husqvarna. Word on the street is he was giving Dungey all he could handle at Baker's Factory this off-season.

He needs a lot of them—twelve to be exact—but he does have the chance to pass RC for third on the all-time 450SX list.

Looking for a sleeper to challenge Webb in the West Region? This may be your guy. He had four podiums a year ago and seems primed for a breakout year.

For a two-time 250MX Champion, Martin has had his share of troubles in supercross. He was good last year—four podiums and a win—but failed to qualify for a main event… AGAIN. He has Johnny O’Mara in his corner, which should help, and is a favorite on the East Coast.

Doesn’t it seem that Double D just works best out of a van, doing it on his own? Well, we will find out, as Durham has put together his own program for 2016 after time with Monster Energy/Pro Circuit Kawasaki and TLD KTM.

27. Wilson Back in Orange Again

You can scratch off his 2015 rookie season—just three rounds completed. Wilson has a lot to show this year to keep his ride. Can he get back in contention in year two with KTM?

He was anyways. Baggett was the surprise of the 450 Class last year. Unfortunately he will miss some time due to injury. How much will it impede his progress?

Only four riders in history—Reed, Stewart, Villopoto and Tomac—have won races as rookies and then improved their win total the next year. A much larger number have struggled in year two. Seely won once last year—will he break the mold?

Remember, he was second in points (a ways back from Dungey, but still solid) last year and had two wins before leaving with an injury at Detroit. But he has only completed the full supercross swing once in his career. Is this year finally his year?

The Rippa is back with GEICO Honda. He filled in for Wil Hahn in 2011, but was injured immediately. He’s much more prepared this time.

34. Is Year two the key for Jordon Smith?

Smith struggled with crashes in year one, but certainly showed flashes of speed. Can he harness it to improve upon his one top ten finish a season ago?

Yeah, we say it every year, but, c’mon, there are nine former 450SX winners in the Anaheim 1 field, and 18 factory riders.

Zach Osborne may be forced to move up to 450s in 2017. Can he capture that elusive first SX race win and a title?

Anything that can happen has happened to the Ecuadorian. Can he bounce back again?

No one really knows what it is… A win? Consistent podiums? Top three finish in standings? All could be possible.

Phil Nicoletti saw action in ten rounds last year due to injuries to Peick and Barcia. Will we have to wait till outdoors to see Filthy?

If momentum can carry over between seasons, then Barcia certainly has it after a strong close to 2015. After going without a podium finish for the first time in his 450SX career in 2015, Barcia is hungry for a win in his second season with the JGR Yamaha crew.

TWO TEAMS. SIX RIDERS. Good to see some yellow back out there.

42. Consistency IS Key for Tickle

Did you know Broc Tickle has finished outside the top ten just three times in the last two years? Now you do.

It’s still unknown at this time as he recovers from a head injury at Red Bull Straight Rhythm.

Unfortunately for Shorty he sustained a shoulder injury and will miss the start of what he said will be his final year.

Year one with BTOSports.com KTM was a wash for Brayton. He found a ton of success this off-season in Europe. Will it translate in the States?

The speed was impressive last year, but Mitch hasn’t been able to stay off the ground in supercross. His first season with factory equipment, via TLD KTM, is a big one.

47. Is Shane McElrath a Contender?

Last year’s West Region runner-up will be moving to the East Region due to a wrist injury. No reason McElrath shouldn’t be considered for a title after his breakout 2015 season.

We’ve been waiting since 2010 to see this guy on a 450 in supercross. Has he waited too long, or is this just right?

49. Matt Bisceglia Looks for Success Away from GEICO

After two up and down seasons at GEICO Honda, Bisceglia hopes to restart his career in 250SX East Region with MAD Racing/Yoshimura/Dirt Candy Suzuki.

50. Is this finally the year for Adam Cianciarulo?

Health is the only concern.

He made waves in his return to supercross last year. Can he close the deal in year two?

It was a rough rookie season for the friendly Oregonian. He has to find a rhythm in year two.

Jake missed most of last season after a sustaining multiple injuries at Detroit. He’s back with Team Tedder hoping to rejoin the mix.

He’s found success moonlighting in the 450 class before. Will it transfer over to a full season?

New digs for the veteran and his MotoConcepts team.

At least you’ll be able to pick out Blue Buffalo/Slater Skins from all those other Yamaha teams.

After a few years of #TeamChizz, Kyle Chisholm has landed a ride with Rocky Mountain ATV/MC riding Hondas for the first time in his career.

Not on the pre-entry list so far. Will we see the 2009 Anaheim winner this weekend?

After coming out of retirement last year in the 250 Class, the elder Hahn is moving back to the 450 with CycleTrader.com/Rock River Yamaha.

The team that almost landed Chad Reed (seriously) had a banner year with Alex Martin and crew last year. A pair of sophomores—Luke Renzland and Colt Nichols—will try to keep the momentum going in the 250s.

The traditional Phoenix stop makes a move to an even higher-tech stadium in Glendale. Have you seen this track map? Good choice, Feld.

Anaheim 3 is out, San Diego 2 is in. Will the new downtown stop welcome two big crowds?

Albertson is moving back down for his new Suzuki team. We’ll see what he’s learned from the big boys.

After much speculation of will-they/won’t-they, Crossland will form a two-rider West Region team consisting of Kyle Peters and Chase Marqiuer.

Can he join his older brother? He’s certainly a favorite following a three podium, one win 2015 season.

66. Straight out of Retirement: Craig back with GEICO

And apparently on the gas, too. If you’re looking for a sleeper out West, this may be the guy.

With 18 factory 450s slated for the gate on Saturday, what privateers will make the main event cut?

Is this the year a small team—pick one, there are a lot—finds the winner’s circle?

RACING IS FINALLY BACK!!!!