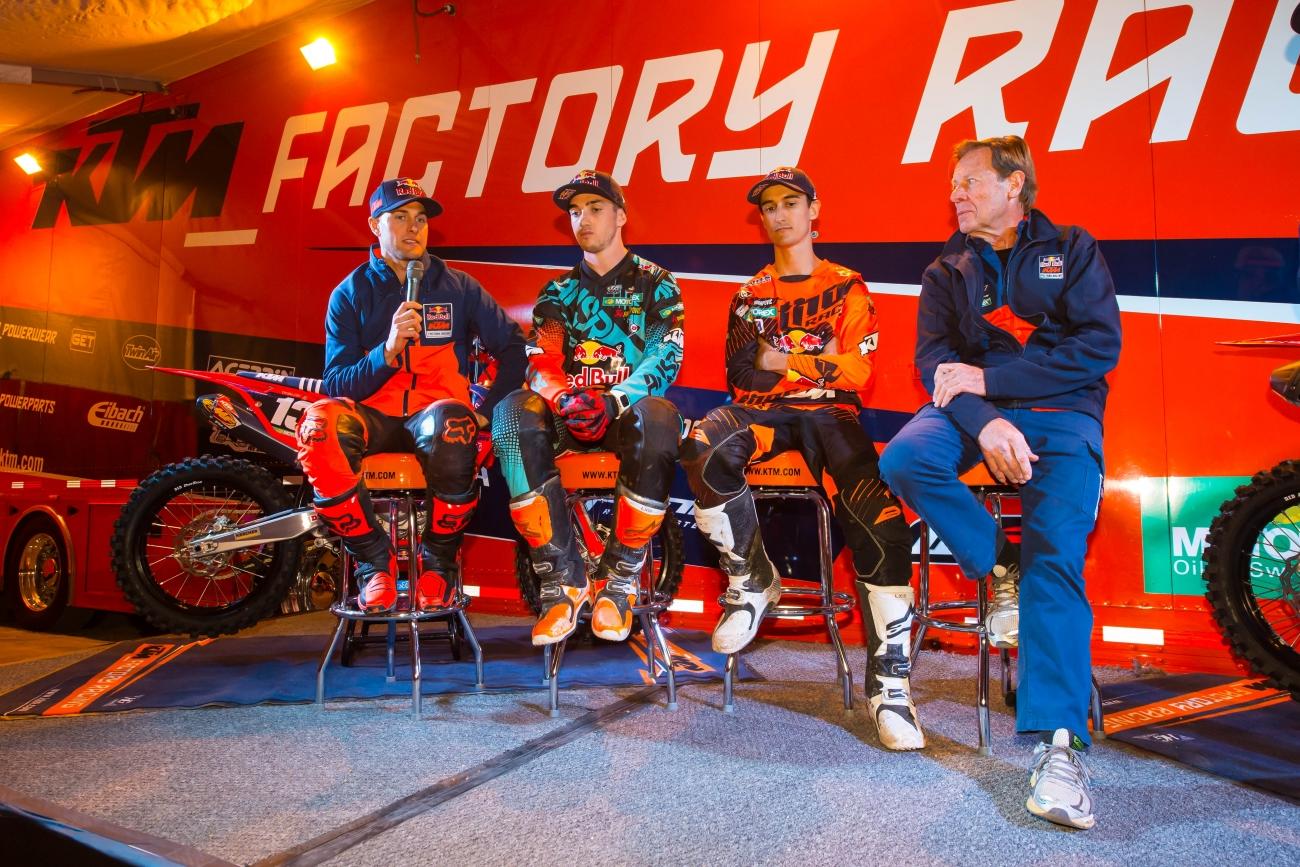 There are few people more deserving of their nickname than Roger DeCoster. “The Man” has been exactly that in every part of his two-wheeled career, from winning five 500cc World Championships, to leading Team USA to a record number of Motocross of Nations victories, and then winning titles as a team manager (or a similar position) for more than 30 years now for a variety of brands. His handpicked prodigy of nearly a decade ago, Ryan Dungey, is about to embark on a defense of his 450cc SX and MX titles for Red Bull KTM, and like always, DeCoster will be right at his side.

Racer X: You’ve been doing this a long time. We’ve talked a lot over the years and you used to talk about, “I’m going to do this a couple more years.” That was five or six years ago or something. What keeps you coming back?
Roger DeCoster: I enjoy what I do. It’s kind of my hobby. I work many hours but it really doesn’t feel like it. When I look at my watch at the shop, many times I think it’s 2:00 or 3:00 in the afternoon and it’s like 6:30, 7:00. I just enjoy what I do. I’m lucky that I have a really good crew around me. I like my guys and I like to work with them. I like to help them try to get better. I just really enjoy what I do.

That’s pretty much everybody’s dream, right? To actually have a job that you like?
Yeah, I feel I’m very fortunate to be in the situation that I’m in that I can do what I like to do, get paid for it, and work with great people.

When you’re deciding on riders to sign, obviously we know Ryan Dungey is a long-time prodigy of yours, but with Dean Wilson and other people like that, what is the number one thing that you think about? What’s most important to you?
For me, the character of the person and unfortunately we don’t have... We all get busy and the schedule and all that. I wish I could spend more time studying about the next rider, to get to know them a little bit better character wise. All these kids can ride bikes, the difference of champions is the ones that can stay on it and have the dedication not just on race day but on Monday, on Tuesday and do it week in, week out and year-round. Those are the guys that win championships.

And that’s not that common for kids in their late teens, early 20s...
And it’s difficult to see early on. I don’t have a magic trick or know to figure out riders. I wish I did. I go by feeling and I speak to people around me and get their input.

So it’s not just what you think, it’s what other people think, too?
Yeah, and we still make mistakes. Not everybody we pick turns out the way we would like. In fact, if you hit one in five you are doing good. It’s only so often that a real champion turns out. If you look back there’s only a handful of guys that are in a position that they can be that way in each generation.

Marvin says he’s riding the 450. Was there any time when he was trying out the 350, or was that on the table?
Yeah. The decision was kind of made just before the GP at Glen Helen. We had him test and ride both bikes there. He was a little bit worried because he had never rode a 450 on supercross, so last week we confirmed. I was really worried that he would go into the season and then if he did not do well the first couple races, [we would hear] “I wanted a 350. The 350 would have been better for me.” But I honestly feel the 450 is really a good bike. It’s right on the weight limit, so there’s no weight advantage because we are already at the limit. If the 350 by rule could be lighter, then there would be one factor there.

What about circulating weight in terms of making it easy to turn?
There’s a little bit in that. Of course with the 450s you have a bigger crank and you have more crank mass, but at the same time the fly-wheel effect is affected by the size of the crank but also by the RPM. The 350 crank is lighter but you’re running it faster, so it’s not completely a disadvantage for the 450 because you run less RPM. Also, for the 450 you can run lower RPM, so it’s easier to find traction if the conditions are bad. That’s also true entering the whoops. On a 350 you would have to come in with more momentum and if you make a slight mistake you’re not going to have that torque to stay in fourth gear going in the whoops, and with the 450 you can do that.

So does Marvin look how you expected?
He’s looking better than expected because he had that serious surgery on his hand and I did not think he would be riding by now, actually. But he started riding about the beginning of last week was the first time he rode. You saw him ride today; he’s not that bad.

He looks good, but I just don’t know what your expectations are. A guy that’s been around as long as he has and everything else, on one hand obviously he’s a veteran, but on the other hand it’s a new bike and a new class...
It’s an injury and it’s a rookie year for him. He’s a little bit older. He’s basically the same age as Ryan. It’s also tough coming from Europe. You need to learn the ropes here, and supercross... supercross is a different animal.

As long as they’re not dragging you along?
[Yeah, if] they have to carry me along. I’m lucky to feel as good as I feel at my age. I can still hang with most of the young guys. It may last another year, maybe more I hope. I love what I do so I hope it lasts as long as possible.