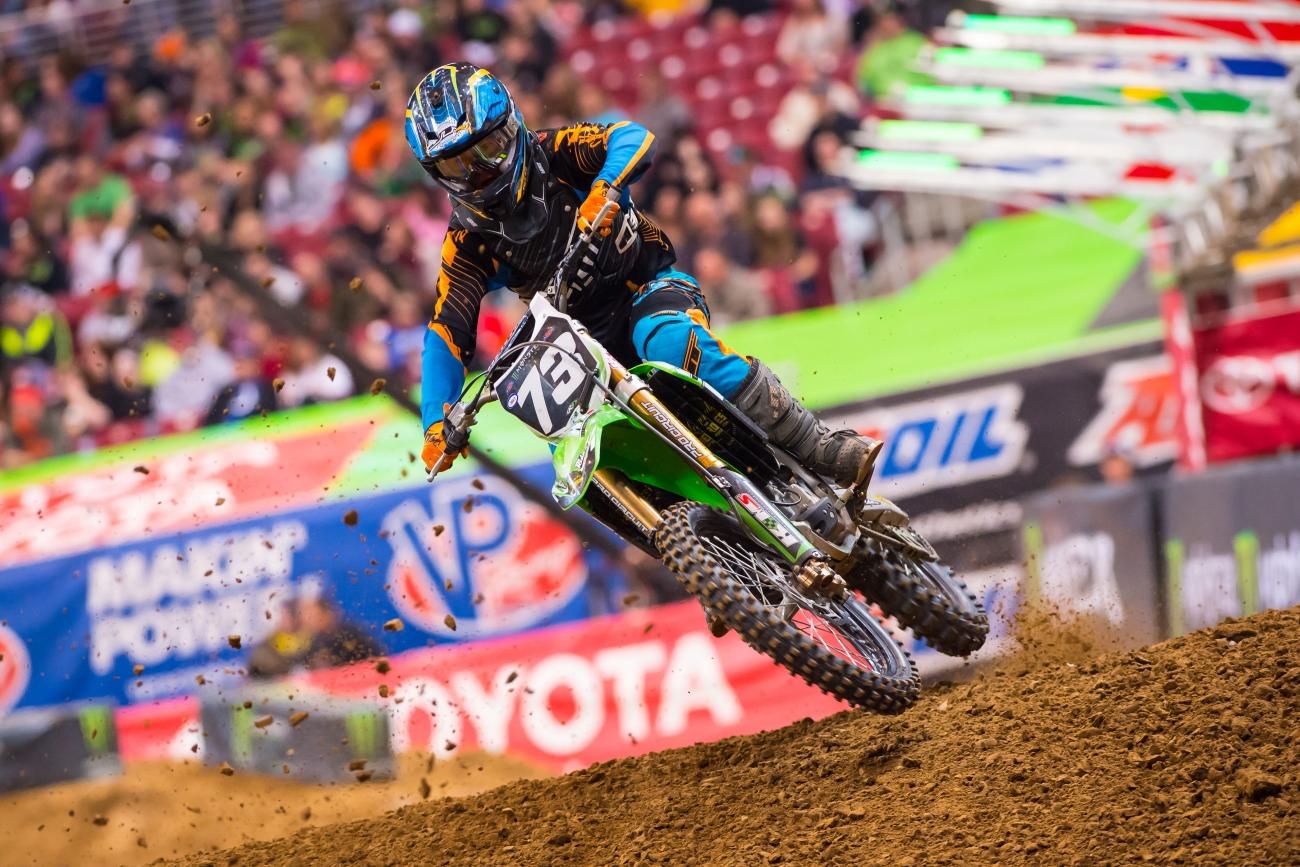 We’ve talked about Gannon Audette’s injury problems in past “Privateer Profiles”, so when he announced a new set of injuries on Instagram three weeks ago it was hard not to be gutted for him.

In a pretty scary practice crash, Audette lacerated his liver, fractured some ribs, bruised a lung, and separated his shoulder. You would think the internal injuries would be the most painful, however, Audette says the separated shoulder has been the biggest problem.

For the past month Audette has been healing and trying to keep his eyes on the first of the year, when he can begin riding again. He’s been doing some projects around his house in Florida and trying to keep himself busy. We called Audette on Tuesday morning to see what he’s been up to.

Racer X: Unfortunately you’ve been on the mend the past three weeks. How are you doing today?
Gannon Audette: Yeah, unfortunately. I guess that’s the way it goes sometimes. I can’t go to the gym right now, but I can at least cycle. I just made a small mistake and it cost me. The crash was pretty bad and I’m lucky to just come out with what I have. Nothing is broken, so it could have been a lot worse.

What have you been doing to keep yourself busy with the time off of the bike?
I haven’t done much because I’ve been hurt. I was on bed rest for almost a week and I got really tired of that quickly. I got out of the house after that. I can’t lift anything or do anything like that. I started cycling last week and that has been getting me out of the house. I’ve been doing a bunch of stuff around the house as far as cleaning some miscellaneous things. Whatever I can do to keep myself from going insane. I’ve been watching some football on TV.

No NBA? Man, what’s wrong with you?
[Laughs] No, I haven’t gotten really into sports. Moving from Minnesota to Tallahassee I learned that people are crazy about their college football here. You get thrown into it. It’s pretty fun to watch, but it’s a big difference in how people act about it. In Minnesota everyone is into pro football and down south it’s all college. I like watching both. I’ll watch the Seminoles and then whatever pro is on.

I saw that you made a display with your bike and trophies from Loretta Lynn’s. That looks really clean.
My practice bike mechanic and myself put that together with the downtime. That bike has been sitting in the shop forever. It needed graphics and wheels, so that was a project. We cleaned up some trophies and made a trophy room yesterday. I’m just getting some stuff done that doesn’t really need to be done. It’s been fun though. I just don’t like sitting around doing nothing.

You’ve had some injuries that have taken you off of the bike for long periods of time. How hard is it to get back into the swing of things—as far as working out is concerned?
It’s not terrible, but you can definitely feel what you lost, that’s for sure. You try to put the same weight back on and you can’t. You feel sore a few days afterwards too. It depends how long you are out as well. I would say it takes about a week before you start to feel good again. I went cycling and I was pretty sore the next day.

You have the same setup for 2016 as well. What do you wan to accomplish this season?
I’ll be with Kissimmee Motorsports and Legends and Heroes again this year. I was only back on the bike for a week and a half before I got hurt. I actually felt better than I ever have. I know everyone says that every year, though. [Laughs] I just felt better physically and mentally. I was really excited about that. I’m hoping to get back to that level and hopefully we will be in good shape. We have the same program pretty much.

We say every year that the talent is deeper and that it’s the most stacked class of all-time. Well, 2016 may actually be some of the deepest talent we’ve ever seen in each class!
A lot of teams are adding more riders and we have the Troy Lee Designs team doing East and West Coast. It’s a lot of competition on each coast and guys have moved up to the 450 class also. I think it’s going to be stacked in both classes and some really great racing. There isn’t a reason why I shouldn’t be in the top ten. Last year I didn’t get a single top ten and I wasn’t happy with that. It was a safe year, but I want to do the best I can do. I just want to lay it all out there. Maybe I wasn’t there mentally last year. This year I’d like to sneak into the top five a couple of times.

Got this project done today

With you being not able to ride or train much at least you’ll have the holidays to keep you busy.
Yeah, I’ve got my family coming down after Christmas for a week or so. After that I’ll be getting back on the dirt bike. We don’t have any events planned other than a New Year’s Eve party.

Since you’re hosting the party are you cooking for everyone?
Oh, I don’t think you want me to do that! I’ll definitely eat it though.

Come on, man! You have some down time. You need to be catching up on your Food Network.
I’ll have to do that sometime I’m sure. Maybe when I get a girlfriend I’ll do that!

We appreciate you taking the time to talk with us today. Have a great holiday season.
Thanks, Troy, the same to you.