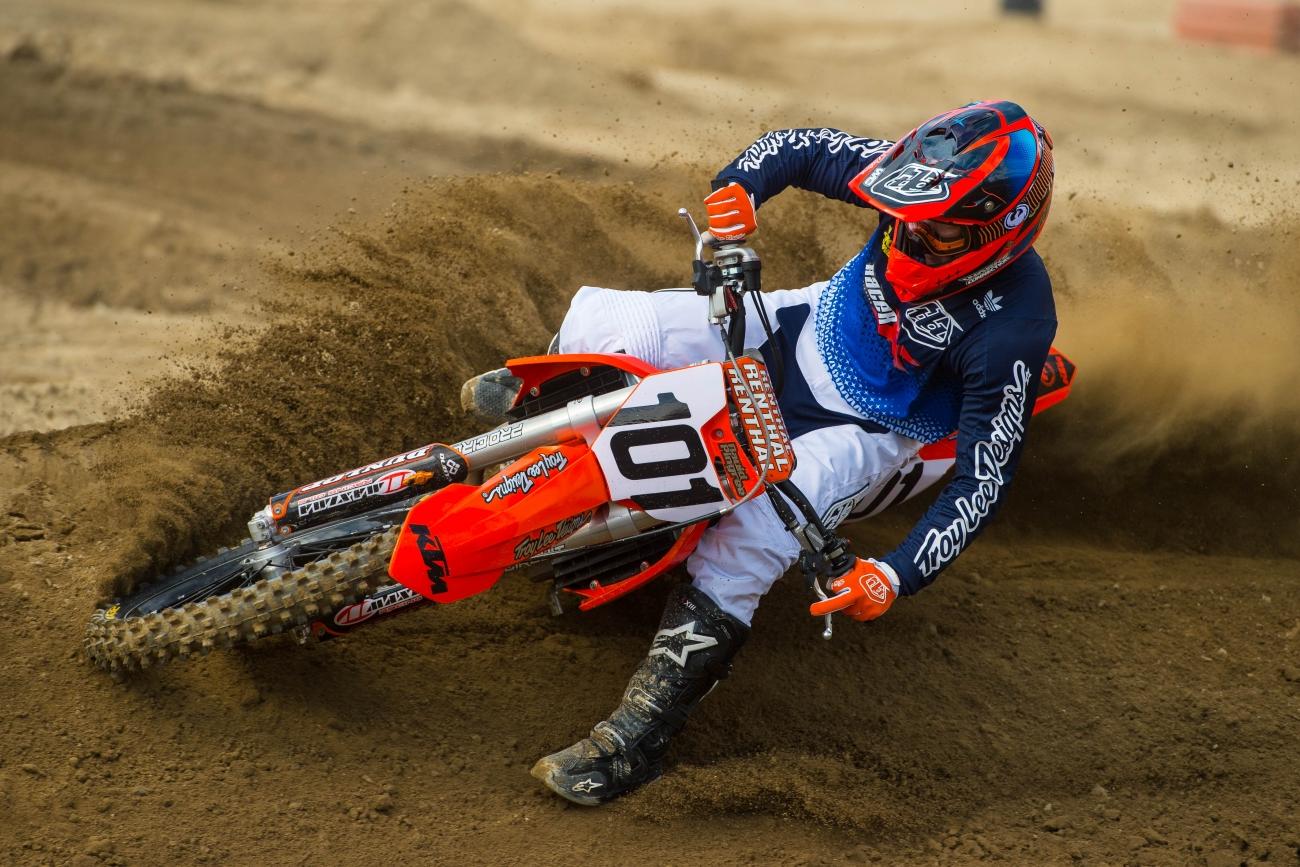 With HRC recently making a production MotoGP machine the RC213V and offering it to consumers for a mere $184,000 I couldn't help but wonder if any manufacturer would consider making a production motocross bike with factory level suspension and custom works parts? I know they would not sell thousands of these machines but would people order a factory HRC CRF450R? Or are the production bikes of today not as far off as production sport bikes and Moto GP machines?

Thanks for your humor every Friday.

I’m really surprised that Honda is selling that bike, though the American version isn’t even close to what Honda races in MotoGP; it’s a well-built knock-off. With so much of bike tuning being done on a computer maybe things are different than they used to be. In the two-stroke days works parts were kept under lock and key and if there were extra parts at the end of the year they were smashed/destroyed so the technology built into them never got out. I doubt that mentality has changed and that makes me think that the RC213V is a watered down version of the race bike with similar bodywork.

As far as motocross bikes go, it would be much easier to do. I’m guessing you could sell a bike that is very close to what the factory teams race for about $25K. Again, there are things they wouldn’t let out but they could make it pretty close for that price and you would have guys shell the money out. KTM’s FE models are the closest thing we have to that and they sell for about 10 grand. Throw some WP works suspension, a different exhaust and some mapping in that thing and it wouldn’t be too far off Ryan Dungey’s machine. The thing with any of those bikes is that you can spend all the money you want and unless you have somebody to help you set it up the way you like it, you’ll be disappointed. $184 grand for a street bike? If I had that kind of cash, and I was going through enough of a mid-life crisis that I thought buying something was the answer, I’d spend it on hair plugs and a Porsche 911 turbo. I just know myself like that.

First things first, thank you for writing your column each week.  I always look forward to reading it on Fridays! I am writing you about my recent experience at Kevin Windham’s Party in the Pasture.  I have been riding since I was 8 years old and now am in my 40’s.  Over the years I have been to many pro races and in the pit areas to meet a large number of former and current riders and entourage.  Everyone, for the most part, has been friendly and polite.  But at the Party in the Pasture it was a whole new level! Kevin and Dottie Windham, Jeremy and Kim McGrath, Wil Hahn, Jordan Smith, Brett Cue, Mike Mason, Chad from Road to Recovery, Anita Button, Lurch, and Doc Bodnar were all there and just some of the NICEST people I could imagine.  Going to the races for years I understand that most of the time these people are working hard and have their “game face” on, but to get to hang with them in this environment was amazing.  To take it one step further I had the pleasure of meeting your boss Davey Coombs.  Man what a genuine guy. I was able to talk with him many times over the weekend and he never acted put out or uninterested.  The track was awesome and the weather held out for the most part.  I wish you could have made it, but there is always next year (and I am sure you will not let us down in the friendly/polite department).

That is awesome you had a good time at Kevin’s PITP. You really can’t go wrong with that group because every person you listed is a quality individual. Sometimes it’s difficult when you approach riders or industry folks at the races because they have a million things going on and they are focused on their job. That means that sometimes guys who are perfectly wonderful human beings can come off like total pieces of dog sh**. I’m as friendly and easy to get along with as anybody and I always took a great deal of pride in talking to people at the races. And yet there are people who will tell me that I was a jerk to them back when I was racing. Of course, then I give them a dirty look, wave my two middle fingers in their face and tell them to stick it where the sun doesn’t shine. I mean, they already think I’m a jerk so I have nothing to lose, right?

Kevin’s Party in the Pasture is on my bucket list and there is nothing that will stop me from being there next year. Hopefully you can make it back out and I can show you what the backside of my longest fingers look like. You hear that, K-Dub? Trim that beard up, make us some dinner and tell Dottie I’m sleeping on the couch!

I've been following motocross and supercross for about 6 years now so I'm still trying to wrap my head around some of the off-season workings. So my question is [I'm slightly biased being a Josh Grant fan but but] how is a guy with that level of skill, or even a guy like Chad Reed, who has a popularity level that is off the charts, still without a ride in December? I forgot the part where I'm supposed to butter you up… Your column rocks thanks for taking the time every Friday to make me laugh; appreciate it dude.

This is a tough question to answer. I can honestly think of at least three spots on three different factory teams where Chad Reed would be a better fit than the current rider. It makes you scratch your head. But there are politics and old relationships and many other factors that we can’t see. Chad doesn’t want to race outdoors anymore so his team would have to find another rider for the motocross series. Chad also has a tendency to be very vocal about his feelings and he may have burned a bridge or two to the ground back in the day... and then emptied his bladder on the ashes. Josh Grant is crazy talented and he had a solid year in 2015 so his situation is just unfortunate.

It’s never fun being the guy without a chair when the music stops. There is a very definitive window of opportunity in professional sports and when it slams shut sometimes the best thing you can do is tip your hat and walk away. There are always options to keep racing in other disciplines [see Mike Brown or Ryan Sipes] and I could see Grant getting into that. Of course he would have to set down the Johnny Walker and get reacquainted with his old running shoes to make that transition successfully. I don’t doubt for a second he could be winning races in WORCS or GNCC if he set his mind to it. The other option is to be prepared for the start of the series and wait for a rider to go out with an injury. We’ve already lost Andrew Short [and we’re not sure if he will be ready to go for Anaheim] and there will be more between now and the middle of January; Grant would be a perfect rider to fill in.

Here’s hoping we see them both line up at A1.