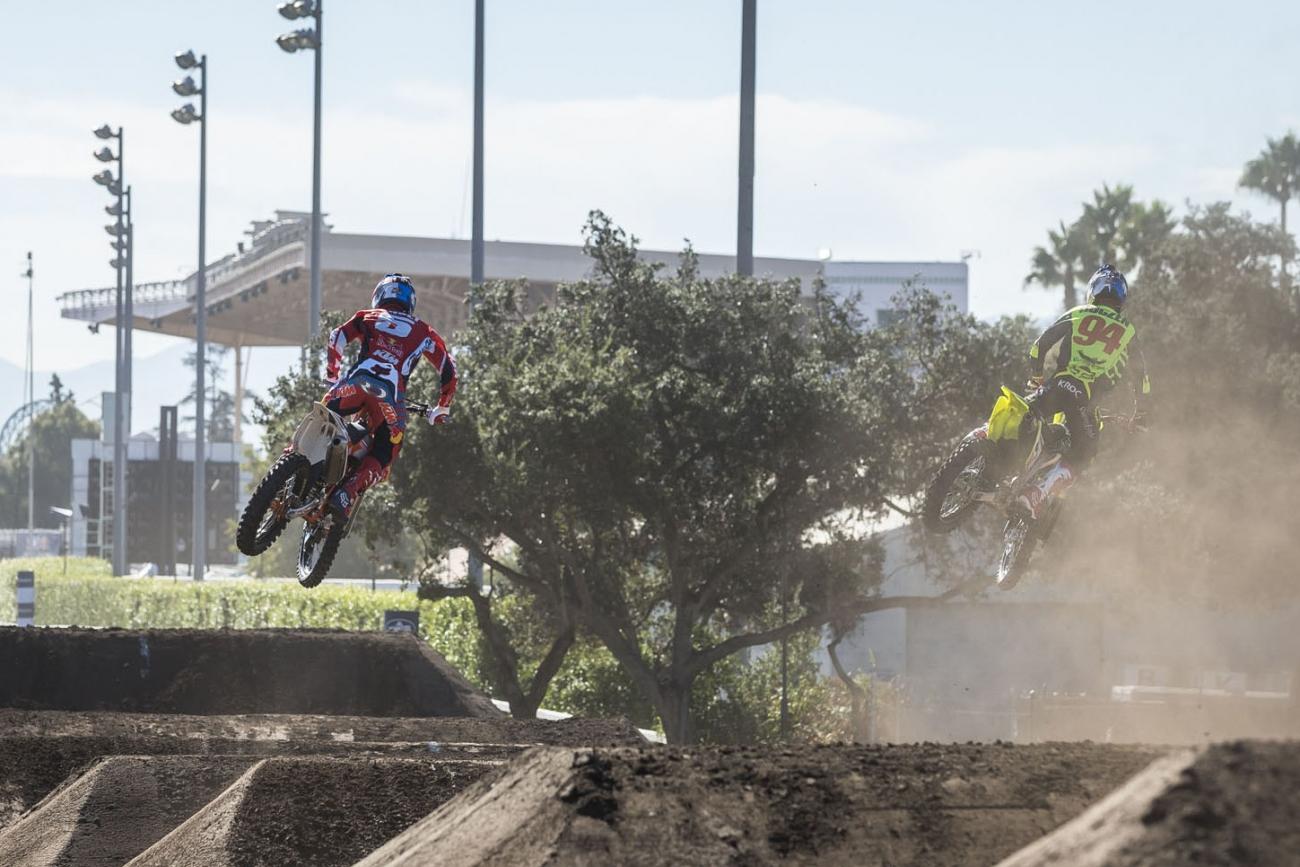 Unsung Hero The Others

Ken Roczen: James [Stewart] definitely got me in the whoops today. They were kind of sketchy, and after I saw RJ [Hampshire], I was super bummed for him. This race is meant for fun; it's not really a championship race or anything. I was bummed to see him down. But we're safe, we had fun, and that's why we came here. But obviously it sucks to lose.

James has been off for a while, but you know he's always going to be fast. In that first race it looked like you looked over and were disappointed.
I knew he got me, but I wanted to put on a good show for the fans. It's very important and I have a lot of fun doing it. I feel like I'm a little bit of an entertainer. I was slapping the front fender, bar humping, everything. It was cool and I thought it was a great event.

Next week?
Yeah, next week is a little bit more important. I need to get a solid week of training in and see where we're at. I'm not going there to be second again, or worse. Winning three races would be great, but it's a tough thing to do. I can guarantee we'll do whatever we can to achieve that.

What happened in the last race with James?
I scrubbed and it carried me over to the left and I crossed the line just a bit. Right away I knew that I was disqualified.

Racer X: You didn't win today, but they say your strength is corner speed, so not a bad day.
Ryan Dungey: No! It was my first time at Red Bull Straight Rhythm, and I had fun! It's different than supercross, but then again, it's really not. We're just missing some turns and so forth. With stuff like this, the speeds are high and you're coming into things so fast. I think there's a bit of a learning curve and I think we can gain some insight and carry that over into supercross. They had a lot of options in the lanes, and in the finals we were really getting after it. Speeds were fast! Everything was just getting dialed in, but obviously [James] Stewart is a tough guy to go up against, and that wasn't even the finals. I felt like we had a good run, beating him in the first one, but he edged us out in the next two. I was happy with the performance, and there's bigger and better things to look forward to, but this was definitely a fun race.

How serious do you guys take this race?
I don't enter a race I don't want to win—I definitely try to win each and every race. But it's a one-day thing, kind like the Monster Cup, and it's not the end of the world, whereas the motocross or supercross series, now you're talking a championship and every point is important. Those are the main championships.

Talk about beating Stewart in that first race. Did you have a line picked out, or did it just come together?
We were pretty good, but through the whoops he was exceptionally good. Then I got a good drive down the reset jump and got onto the tables really well, and when I landed off the tables I clicked up a gear before landing, and was really able to manual through nice. I don’t think I did it all day as well as I did it that time. In the next two, I knew we were going to have to be better in the whoops, and I feel like we were, but he's just really good in the whoops—it's his strong suit. That and speed—he's very fast. It’s a challenge. The guy is tough, and after a year, I'm sure he's ready to get on the gate.

What bike were you on today?
We basically started two weeks ago, and earlier this week we made some adjustments to the bike that we pretty much ended on in Vegas, and we got a little bit better. That's our setup right now, our top-of-the-line setup that we've come up with, and I'm happy with it.

Monster Cup next week. You’ve had some weird luck there. It’d probably be nice to win the thing.
More importantly, just getting back into the supercross swing. Today was kind of like that, but next week we'll have turns and stuff like that.

And a Joker Lane.
And a Joker Lane. Don't forget that! Yeah, we've had a couple weird deals, but all together Vegas has been fun and we ended it with a win in May. We know our bike is good, and we've gotten better since then.

Shane McElrath: It was a safe day of racing. This is probably the most fun race all year. It's just quick sprints, and we don't really have that too often. It's kind of like qualifying in supercross. It's fun to do something different. We race motos all year, which is what we live for and it's fun, but it's nice to switch it up sometimes. To get to do this is a cool change of pace.

How was the track this year versus last year?
I think they said it was a little shorter this year, just because of the area they had to work with. I felt like it was a little more technical, and there weren't as many options as last year. But the main line was pretty technical and easy to make a mistake. Everything was perfectly to scale; they did a really good job building the track. It was better organized than last year because they knew what they needed to change for this year. It’s just a cool event all around.

So the event itself has evolved?
Yes. It's also been so hot on these weekends. It'll cool off but then get really hot on the weekend, and I think that might scare a few people away. I don't know if I would come out here just to sit in the sun if I wasn't riding. But it's definitely cool to come watch, and the grandstands had shade. It's just a different race, and the fans get to come out and see something different.

Take us through the final with Malcolm [Stewart]. It was a lot closer in the second race than the first.
The first race, I missed a rhythm and he just pulled me. I couldn't do anything. I felt a lot better in the second one and it was going good, but I just jumped too far on a rhythm and that slowed my momentum. It gave him enough room to pull out. I tried to reel him back in, but it was too late.