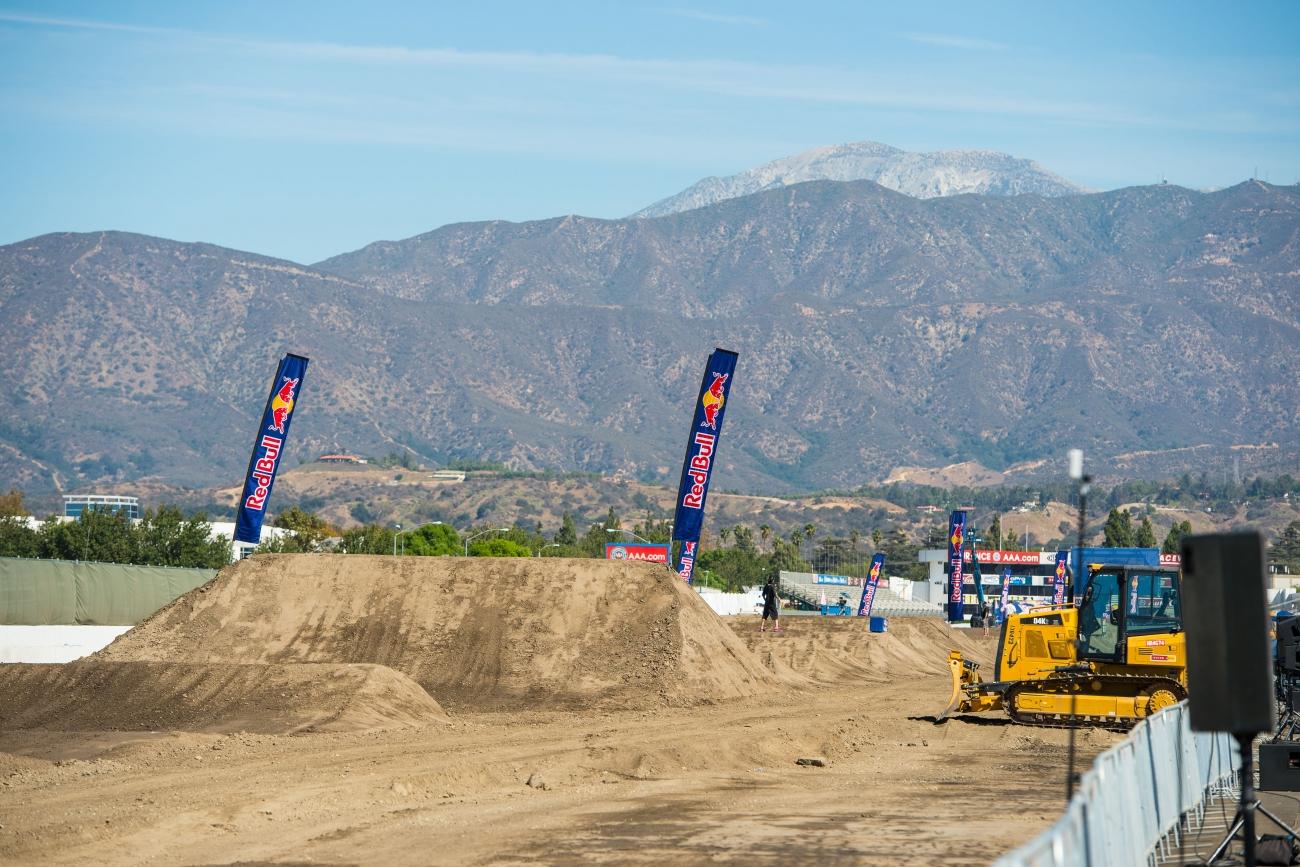 There’s solid star power on the rider list for this weekend’s Red Bull Straight Rhythm event, but the track itself is the real star. This is a supercross track unwound, with zero turns and 2,500 feet of whoops and jumps.

It seems simple to take a regular supercross track and just make it straight, but tests show that the Straight Rhythm track requires subtle changes to really work. We chatted with track designer Jason Baker, of Dream Traxx, to find out how it all works.

Racer X: So, Jason, is it a challenge to build this track? Is it that different from a regular track, or are you literally taking a regular supercross track and taking the turns out?
Jason Baker: I think the biggest thing about Straight Rhythm is trying to watch the speed. That’s why we decided to do a test at the inception, because we didn’t know what speeds these guys could create. It’s a supercross track, but we’ve learned the distances and dimensions to control the speed these guys are carrying to keep it safe. Safety is the number-one concern. I think that’s the true challenge—making it technical enough to be a good race but also letting them carry some speed, but not doing too much of either.

I think last year, at least what I expected, was that we’d see the gnarliest whoops and biggest jumps we’ve ever seen. But it doesn’t seem like you went that direction, and seriously, there were hardly any crashes at all.
Yeah, and that’s a win, when we make it through an event and everyone is smiling, and everyone walks out of here healthy. It’s the off-season, yeah, but it’s the beginning of supercross testing, too, so we don’t want to stack anyone up and ruin their 2016 season. For us, we developed the speed checks, and they’re basically our corners. That’s where they can regroup. It would be way too much to try to memorize a 2,500-foot track. I think we’ve got it down pretty good now, but we’ll have some new challenges this year because we wanted to change the track up and make a noticeable difference from last year. You’ll be able to tell it’s the 2015 track versus the 2014 track as soon as you glance at it. I think the riders will enjoy it.

Obviously, without turns, it seems like the riders could just build an unbelievable amount of speed. Somehow they don’t, and whatever tricks you’re using to slow them down aren’t obvious.
Well, nowadays, with the rider techniques, everyone loves watching the guys get the bikes sideways and low and scrub. So they get to that speed check feature, and it’s just a ten-foot wall jump. If you tried to jump it, you would just air it out and be up in the air so long you’d lose time. The object is to get the power back down to the ground. As a designer, I know that’s a reset button. So that’s the neat part; the spectators like watching the guys scrub the jumps, so it still looks pretty cool even though we’re using it to slow the guys down and help them reset.

When you first tried this, was there a real fear the riders couldn’t memorize all the jumps, and this just wasn’t even going to work at all?
There really was! For the test, we just did several different sections. The first section was true supercross—the dimensions were the same. I would say it almost slowed everything down because it was so technical and tight. Beyond that is when we started stretching it out more and more and making each lane longer. Based on the rider feedback we got on the initial test, we were able to keep refining it. The riders would tell us what worked and didn’t work. That’s the beauty of Red Bull—the events they put on are tried and true, and it’s evident. They’re number one in the world for doing these types of outlandish events, so they know the process. We tested, we got feedback, we kept working on it until we knew the best way to build it for the actual event.

So, if someone were riding it, they’d notice the dimensions of the jumps, the transitions between them—those things are actually different from a regular supercross track?
Yeah, they are. We grow it out. We also have to be perfect with our transitions because of the speeds. We can’t have what I call a double kink, which you sometimes get in supercross. They come in and lay the floor down, then they build an obstacle, so the riders land from that feature, then go back to the floor, then they hit the next obstacle. You kind of get a double spring action on some of the jumps—the floor and then the feature. Here we try to build what I would describe as one banana—one curve, one smooth transition all the way up the jump. Also, we have to make sure the left side matches the ride side. If one side of the jump were six inches lower than the other side, it would be a big advantage for one of the riders. So we have to be on top of it, making sure all twenty-five feet is as close to perfect as we can get it.

You said you want to make the track look completely different from last year. So what are some of the things that will make it pop out?
Well, you’ll notice a change literally straight out of the gate. We’ve got an elevated start, and it’s the first time I’m aware of anything like this being done. The riders will start fourteen feet up and then drop over a gap to get back down to the ground. Then the first section is a six-pack of jumps—nothing crazy—but it will come down to getting that power to the ground, scrubbing it, and timing it perfectly. Last year we had speed whoops as the first obstacle, so now it’s full technical right off the start. Another major change is, last year we had the stadium whoops right before the finish. This year we have a rhythm-lane-option section before the finish. It’s three tabletops, a three-footer, and then two tabletops. So you have to choose: do you want to jump through the first part and go on-off at the end, or vice versa? I think it will be neat to have that right in front of the spectators. So those are the big changes, and of course all of the rhythm sections throughout the rest of the course have been changed up as well. Again, every year we try to get better. I can’t change the layout—it’s a straight line—so we do what we can with the sections to change it up.

The event moves from a drag-racing track to a horse racing track. Does the dirt change or anything?
The thing that has changed is that we’ve had some rain here. This is probably the best dirt I’ve ever worked with out in California. It might add another technical aspect to the track; it might break down and create some ruts. Again, it’s different, but I’m excited about it. It will be fun to watch these guys attack it.

What riders do you work with? This isn’t your first rodeo even though Straight Rhythm is new.
Right. We work with a lot of these guys on their private tracks, so we can take a general consensus of what these guys want to do. They know what they can do, and they also know there are some things you can’t do on a regular supercross track because of the turns. Maybe they can’t do the biggest jump because they have to set up for the corner. Here they can go for it and air it out. I think having the relationship we have with the riders we work for is a benefit for us.

Somewhere along the way, does it get tempting to do something really crazy? Like the gnarliest whoops ever, or a five-jump instead of a quad?
[Laughs] Without a doubt, that’s always tempting. When I design this thing, I know there’s potential within this track to do some quads and fives if they want to go for it. It’s in there. But again, in supercross, the lower you stay to the ground, the more you accelerate. Sometimes the biggest jump isn’t the fastest way, but I think at least in practice you’re going to see some incredible leaps.

By the way, what other riders and tracks do you work with?
We work down at Aldon Baker’s facility, so that’s [Ryan] Dungey, [Jason] Anderson, [Marvin] Musquin, and [Adam] Cianciarulo. We work at Trey Canard’s, and we just picked up the factory test tracks this year, so we’re working for KTM, Husky, and Team Honda. In the past we’ve worked with [James] Stewart, we managed [Ryan] Villopoto’s track…. We’ve got feedback from a lot of the top guys in our bag of tricks.