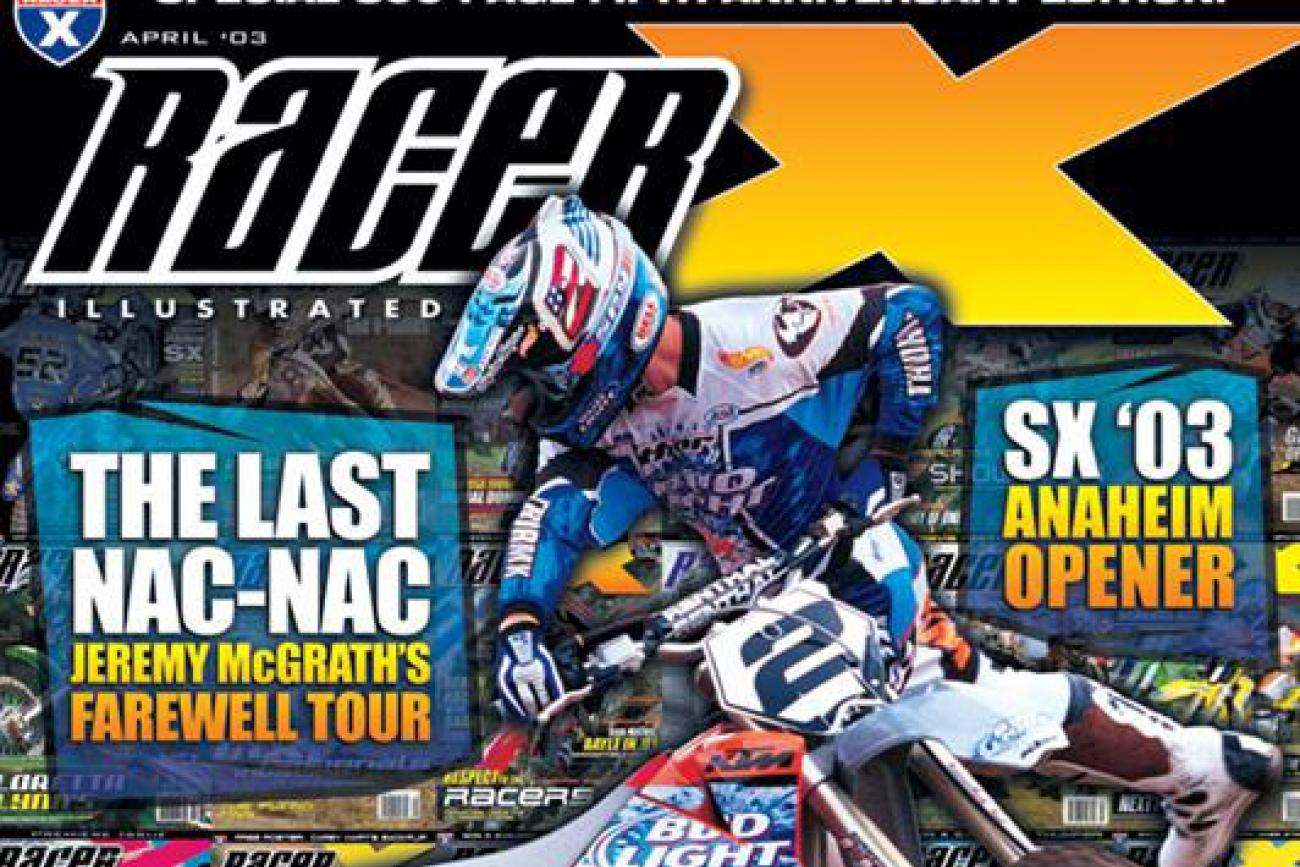 Jeremy McGrath retired in 2002 following seventy-two career supercross wins (still a record), seven AMA Supercross Championships (still a record), and an AMA Motocross Championship. Throughout his career—which spanned from 1990 through 2002, and included a part-time comeback in 2005 and 2006—he won championships with Honda and Yamaha, and also rode for Suzuki and KTM for a brief spell. But his first ever win actually came with Kawasaki Team Green at the Las Vegas Supercross in 1990, in the 125 class. Last November, after nearly ten years working with Honda in a testing and R&D role, McGrath returned to Kawasaki to serve as a brand ambassador.

During his career, McGrath was featured on the cover of Racer X Illustrated seven times, from our first ever issue in 1998, through to April 2006, which was the end of his part-time comeback out of retirement. In the December 2015 issue, which was released today, McGrath is once again featured on the cover for an eighth time. Long-time Racer X contributor Eric Johnson wrote about McGrath's new role at Kawasaki in the issue, which you can check out here.

For the List this week, we look back at the previous seven issues (as well as the current one) that featured McGrath. You'll notice that this month’s cover and the April 2003 cover look similar, with McGrath pulling his famous nac-nac.

This is the first issue of Racer X Illustrated as a magazine. Obviously, if you're going to build something people will collect and reference forever, it's a good move to put an all-time rider on the cover. MC fits the bill as well as anyone. The shot came from the Bercy Supercross.

No numbers? Stock graphics? Sleeves pushed up? MC and the 1990s generation of racers could free ride with the best freestyle riders, long before racing and FMX split into two distinct sports.

We asked the legendary David Bailey to rank the twenty-five best supercross riders of all time, and you can guess who was number one. Time for another cover!

For our fifth anniversary issue, we decided to do something that hadn't been done yet: we made an issue themed around the 1990s. This all coincided with McGrath hanging up the boots suddenly just days before the 2003 season began. We grabbed a shot of him doing a nac-nac on his ill-fated KTM 250SX experiment. Yes, McGrath had retired, so this was supposed to be the last nac-nac….

Two years later, rumors started to form that MC was coming out of retirement to race some 2005 supercross races for Honda. But after missing the full 2003 season, his trademark career number of 2 was about to go up for grabs unless he scored a few points. McGrath addressed the rumors with an interview in this issue—and he indeed showed up at the Steel City National finale in 2004, scored a few points, and kept his number for 2005.

McGrath raced seven races in 2005 and six in 2006 just for fun, and he was still damned effective. He racked up four top-five finishes during his return. By 2006, most riders had switched to 450 four-strokes, but MC still gave his old CR250 a shot. In the waning days of the two-stroke, Jeremy pulled the holeshot at the Phoenix Supercross and promptly threw this nac-nac while leading the first lap of the main event. Some guys just have it.

Going full circle, McGrath is now back with Kawasaki, the brand he broke into the pros with. Our latest issue is available to subscribers this week, and you can read all about McGrath's life as a brand ambassador, and what life is like being the King of Supercross.

Want a limited edition T-shirt featuring McGrath's most recent cover? Subscribe today for $19.98 (same as the year of the first cover) and receive it for free! These are print to order, so don't expect to find them up for sale after this offer.